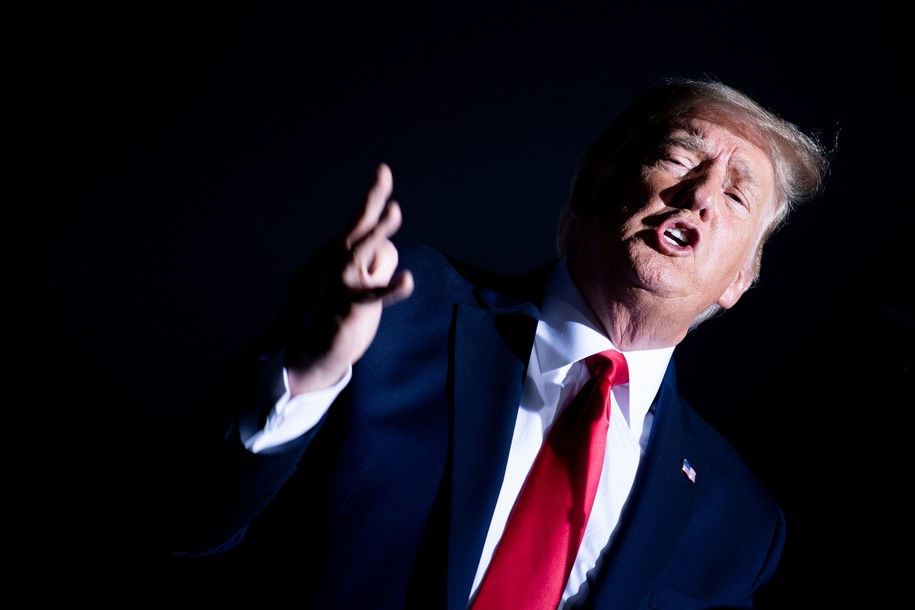 Key finding: “The poll shows that close to 90 percent of voters have firmly made up their minds, and that seven-in-10 believe the upcoming debates aren’t that important in deciding their vote.”

A new New York Times/Siena College poll in Montana shows Sen. Steve Daines (R) just ahead of Steve Bullock (D) in the U.S. Senate race, 45% to 44%. The Green Party candidate got 3.5%, but he will no longer appear on the ballot.

In his first extended remarks following the death of Justice Ruth Bader Ginsburg, Joe Biden accused Republicans who would “jam this nomination through” of hypocrisy, while seeking to reason with other GOP senators, Politico reports.

Said Biden: “Please follow your conscience. Don’t vote to confirm anyone nominated under the circumstances President Trump and Senator McConnell have created. Don’t go there. Uphold your constitutional duty, your conscience, let the people speak. Cool the flames that have been engulfing our country. We can’t ignore the cherished system of checks and balances.”

A new Reuters/Ipsos poll finds 62% of Americans, including many Republicans, want the winner of the November presidential election to name a successor to Ruth Bader Ginsburg on the U.S. Supreme Court.

“Far away from the glare of the presidential campaign, a competition rivaling it in importance is playing out across the country: for power over the redistricting process — and potentially control of the House for the next decade,” Politico reports.

“Republicans dominated the 2010 elections and used their authority over map-drawing to cement a hold on the House for most of this decade. This time, Democrats are poised to claw back some of that power, and the extent of their gains will come down to under-the-radar elections in a pair of GOP-leaning Sun Belt states: North Carolina and Texas.”

Politico: “The first signs of the impact of Ruth Bader Ginsburg’s absence may come in a flurry of election-related disputes expected to reach the Supreme Court on an emergency basis in the coming weeks. Until Friday, Chief Justice John Roberts or other justices had the power to issue or deny emergency relief by joining with the court’s four liberals. It didn’t happen often, but it did sometimes happen.”

“With the court shorthanded for the time being, the court’s three remaining Democratic appointees would now need two Republican-appointed colleagues to take emergency action. With scores of court challenges underway across the country seeking or opposing coronavirus-related changes to voting procedures, the change in the ideological balance of the high court could affect the outcome of such fights — even if a new justice doesn’t take the bench until after the election.”

“There’s no doubt everything will be sort of on the table if we’re thrown into a world where you can’t trust somebody’s word and precedents get changed at will to fit your priorities of the moment.”

— Sen. Chris Murphy (D-CT), quoted by the Washington Post, in response to Sen. Lindsey Graham’s decision to go back on what he said in 2018about not voting to confirm a Supreme Court justice in an election year,

Politico: “The looming battle over President Trump’s upcoming Supreme Court nominee to replace the late Justice Ruth Bader Ginsburg is already turning into an ugly partisan brawl, with Senate Democrats warning they’ll retaliate if they win control of the chamber and White House on Nov. 3.”

“Even more than the 2018 crisis surrounding Brett Kavanaugh’s nomination to the high court, Democrats say the fallout from Senate Majority Leader Mitch McConnell’s effort to quickly push through a new justice — who could then be confirmed this year by the Senate — could lead to permanent consequences for the institution.”

New York Times: “Now, confronted with a moment that many believe will upend the 2020 election — the death of Justice Ruth Bader Ginsburg and the prospect of a bitter Supreme Court confirmation battle — Mr. Biden’s campaign is sticking to what it believes is a winning strategy. Campaign aides said Saturday they would seek to link the court vacancy to the health emergency gripping the country and the future of health care in America.”

“While confirmation fights have long centered on hot-button cultural divides such as guns and especially abortion, the Biden campaign, at least at the start, plans to chiefly focus on protecting the Affordable Care Act and its popular guarantee of coverage for people with pre-existing conditions.”

Senate Majority Leader Mitch McConnell (R-KY) wrote to Republican senators and urged caution in how they answer questions about voting on Ruth Bader Ginsburg’s replacement on the Supreme Court:

“This is not the time to prematurely lock yourselves into a position you may later regret… I urge you all to be cautious and keep your powder dry until we return to Washington.”

Sen. Lisa Murkowski (R-AK) is the second Republican Senator to oppose taking up the a new Supreme Court nomination before the election, the Washington Post reports.

Said Murkowski: “For weeks, I have stated that I would not support taking up a potential Supreme Court vacancy this close to the election. Sadly, what was then a hypothetical is now our reality, but my position has not changed.”

The only other Republican to take such a position so far is Sen. Susan Collins (R-ME), who said over the weekend that whoever is elected in November should nominate Ginsburg’s replacement.

President Trump mocked an American news anchor for being shot with a rubber bullet during George Floyd protests in May, calling it a “beautiful sight” during a political rally in Minnesota, CNN reports.

Said Trump: “I remember this guy Velshi. He got hit in the knee with a canister of tear gas and he went down. He was down. ‘My knee, my knee.’ Nobody cared, these guys didn’t care, they moved him aside. And they just walked right through.”

He added: “It was the most beautiful thing. No, because after we take all that crap for weeks and weeks, and you finally see men get up there and go right through them, wasn’t it really a beautiful sight? It’s called law and order.”

As President Trump continues to tout the progress of coronavirus vaccine development, going so far this week as to promise delivery to everyone in the U.S. by next spring, 69% of Americans report having no confidence at all in him to confirm the safety of a potential inoculation, according to a ABC News/Ipsos poll.

“Pelosi wants to steer the conversation around the potential Ginsburg replacement to health care, which polls show is a top issue for voters, especially amid the coronavirus pandemic. The Trump administration has urged the courts to strike down the law, and with it, protections for millions with pre-existing conditions.”

“Furious Democrats are considering total war — profound changes to two branches of government, and even adding stars to the flag — if Republicans jam through a Supreme Court nominee then lose control of the Senate,” Axios reports.

“On the table: Adding Supreme Court justices… eliminating the Senate’s 60-vote threshold to end filibusters… and statehood for D.C. and Puerto Rico.”

“Dems aren’t optimistic about blocking the nominee. But they have many ways of retaliating if they win Senate control — and are licking their chops about real movement on ideas that have been pushed futilely for decades.”

“Moments after vowing to nominate a woman to the Supreme Court at his campaign rally in North Carolina on Saturday night, President Trump asked some of his female supporters in the crowd if their husbands had approved their attendance,” the Daily Beast reports.

New York Times: “A group of Trump supporters waving campaign flags disrupted the second day of early voting in Fairfax, Va., on Saturday, chanting ‘four more years’ as voters entered a polling location and, at one point, forming a line that voters had to walk around outside the site. County election officials eventually were forced to open up a larger portion of the Fairfax County Government Center to allow voters to wait inside away from the Trump enthusiasts.”

“Election officials said that the group stayed about 100 feet from the entrance to the building and, contrary to posts on social media, were not directly blocking access to the building. But they acknowledged that some voters and polling staff members felt intimidated by what some saw as protesters.”