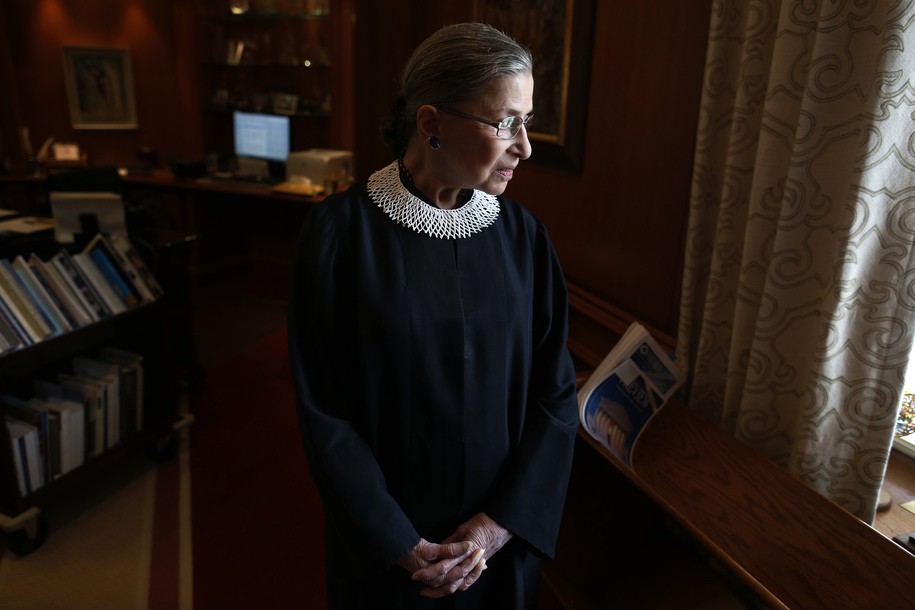 Multiple sources close to President Trump with direct knowledge tell ABC News he is expected to put forth a nominee to fill Supreme Court Justice Ruth Bader Ginsburg’s seat in the coming days.

Trump said Saturday that he plans to announce his nomination next week. “It will be a woman — a very talented, very brilliant woman,” Trump said at an evening campaign rally in North Carolina. “We haven’t chosen yet, but we have numerous women on the list.”

Sen. Susan Collins of Maine said that she was opposed to holding a vote on President Trump’s Supreme Court nominee before the November election, and suggested that were he to lose, his successor should ultimately choose a nominee to replace Justice Ruth Bader Ginsburg, the New York Times reports.

Talking Points Memo: “While President Donald Trump prepares for a campaign rally in North Carolina on Saturday, Republican Thom Tillis, a junior senator for the state, is making his position clear that he believes the President is justified in nominating a successor for the late Ruth Bader Ginsburg who died Friday ahead of the election.

Tillis, who faces a challenge from attorney and Democrat Cal Cunningham in November, tried to justify President Trump’s effort to nominate a replacement for Ginsburg’s seat before the election by saying that voters in his state would “ultimately render their judgment” about a second-term for Trump at least in part based on how the President chooses to fill the court’s vacancy.”

“Shortly before the announcement that Supreme Court Justice Ruth Bader Ginsburg had died Friday, Sen. Lisa Murkowski said in an interview that if she was presented with a vacancy on the court, she would not vote to confirm a nominee before the election,” Alaska Public Radio reports.

“Murkowski said her reasoning is based on the same reasoning that held up the confirmation of former President Barack Obama’s final nominee to the Supreme Court.” Said Murkowski: “That was too close to an election, and that the people needed to decide. That the closer you get to an election, that argument becomes even more important.”

Back in 2016, Graham was singing a very different tune. When Senate Republicans refused to even hold a hearing on Obama-nominee Judge Merrick Garland, Graham said it was too close to the election even though at the time of late Justice Antonin Scalia’s death in February it was roughly nine months away.

“I want you to use my words against me,” Graham said at the time. “If there’s a Republican president in 2016 and a vacancy occurs in the last year of the first term, you can say Lindsey Graham said let’s let the next president, whoever it might be, make that nomination.” He has since reissued that promise several times over.

Said McConnell: “President Trump’s nominee will receive a vote on the floor of the United States Senate.”

“The statement marked the first salvo in what is certain to be a fierce political fight over whether Trump and the Republican-controlled Senate decide Ginsburg’s successor.”

Barack Obama, quoted by NBC News: “Four and a half years ago, when Republicans refused to hold a hearing or an up-or-down vote on Merrick Garland, they invented the principle that the Senate shouldn’t fill an open seat on the Supreme Court before a new president was sworn in.”

“A basic principle of the law — and of everyday fairness — is that we apply rules with consistency, and not based on what’s convenient or advantageous in the moment.”

“The rule of law, the legitimacy of our courts, the fundamental workings of our democracy all depend on that basic principle. As votes are already being cast in this election, Republican Senators are now called to apply that standard.”

Josh Marshall: “Ruth Bader Ginsburg’s death is a grave, sorrowful and ill-timed calamity in the escalating crisis of American democracy, the crisis of the American state. The only relevant and timely thing I can think to add is this: You can’t work this kind of problem or operate in this kind of environment unless you’re ready to say what you’re going to do. You can’t start by saying McConnell has to follow his rule. You need to say what you’ll do when he doesn’t. Otherwise you’ve got one side with words and the other with the ability to act. And that’s a loser’s hand.

The thing to do, if Republicans take this course and the Democrats take the presidency and the Senate, to add either two or four new seats to the Supreme Court, for a total of 11 or 13.

We are here because of the Republican party’s increasing unwillingness to accept limits on political action. To up the ante on that tendency, to meet it, is itself a grave threat to democratic governance. But an even graver threat is to remove any mechanism of consequences or accountability. Then there is truly no limit or disincentive to corruption, law breaking and bad action. That reality is precisely the one in which we currently find ourselves.

In war or in sports or really any kind of contest you never let the other side hold all the initiative. You can say that McConnell and Trump shouldn’t take this step, that the American people should get to decide. Because the reality is they can take this step. So what will you do when they do that. The answer is you take the clearest and most economical step to undo the corrupt act. Adding new Justices is the way to do that.

Make this new corruption a centerpiece of the campaign, hold it over the heads of embattled Republican senators, try in every way to get a just result, which is to put this in the hands of the next President and Congress. But make clear that if it happens Democrats will undo it next year if the people give them to power to do so.”

Mark Kelly (D), should he win the U.S. Senate seat in Arizona, could be sworn in as early as November 30, according to elections law experts who spoke to the Arizona Republic.

Wired: “It was as if YouTube had flipped a switch. In a way, it had. Scores of them, really—a small army of algorithmic tweaks, deployed beginning in 2019. Flat-earther Mark Sargent’s was among the first accounts to feel the effects of a grand YouTube project to teach its recommendation AI how to recognize the conspiratorial mindset and demote it.”

“It was a complex feat of engineering, and it worked; the algorithm is less likely now to promote misinformation. But in a country where conspiracies are recommended everywhere—including by the president himself—even the best AI can’t fix what’s broken.”

Aaron Blake: “As the 2020 election draws near, it seems that every few days brings a new former Trump ally or adviser — or even, in a couple of cases, a family member — speaking out against him.”

“Trump and the White House have continually dismissed these voices as disgruntled ones. But the sheer volume of them is without precedent in recent American history. Put plainly: You don’t see a bunch of former Joe Biden allies making similar cases again Trump’s 2020 opponent. Some of the critics such as Troye are making their first forays into the national spotlight and inviting attacks in ways that suggest they didn’t come to their decisions lightly.”

“Given the growing onslaught of internal critics, it can be difficult to keep them all straight. So let’s recap them.”

“The Trump administration is pushing the sale of seven large packages of weapons to Taiwan, including long-range missiles that would allow Taiwanese jets to hit distant Chinese targets in the event of a conflict,” the New York Times reports.

“If approved by Congress, the packages, valued in the billions, would be one of the largest weapons transfers in recent years to Taiwan. The administration plans to informally notify lawmakers of the sales within weeks.”