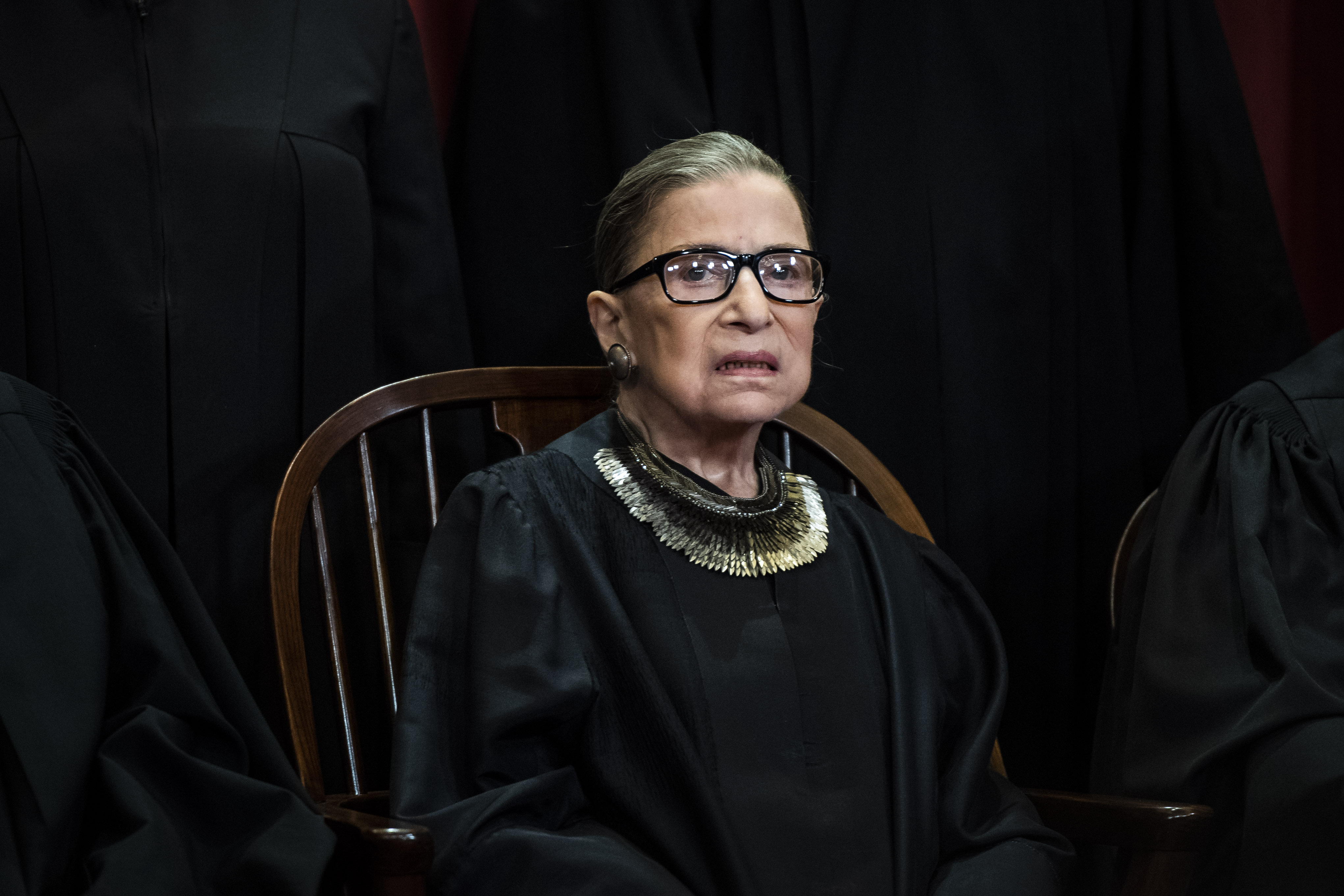 The Supreme Court announced her death, saying the cause was complications from metastatic cancer of the pancreas.

In a statement dictated to her granddaughter Clara Spera days before her death, Justice Ginsburg said, “My most fervent wish is that I will not be replaced until a new President is installed.” Per NPR reporter Susan Davis.

Nothing is done until it is done. I think Trump and McConnell will try to fill the seat. But there is an open question about whether vulnerable Senate Republicans will want to do it. In Colorado, Arizona, Georgia, and Maine, voting for Trump’s nominee in violation of the Merrick Garland Rule will doom them to losing reelection. Romney and Murkowski have already said today that they will not vote for a new Supreme Court Justice until January 21. You only need one more and the Senate is shut down. So we don’t know how this ends now. But if everyone sad tonight does not vote for Joe Biden and every Democrat up and down the ballot, then you are spitting on her grave.

Josh Marshall: “Justice Ginsburg is dead, and one can barely utter the words without thinking of the battle to fill her seat, not out of disrespect for her and her enormous imprint on the course of American legal history, but because of how quickly Mitch McConnell and Donald Trump will move – tonight – to lock down that Trump will fill the seat before his term ends. The mourning will inevitably be colored by the rush to lock in a historic conservative majority on the court.”

Chief Justice John G. Roberts, Jr. said of Justice Ginsburg: “Our Nation has lost a jurist of historic stature. We at the Supreme Court have lost a cherished colleague. Today we mourn, but with confidence that future generations will remember Ruth Bader Ginsburg as we knew her — a tireless and resolute champion of justice.”

Justice Ginsburg was born in Brooklyn, New York, March 15, 1933. She married Martin D. Ginsburg in 1954. She received her B.A. from Cornell University, attended Harvard Law School, and received her LL.B. from Columbia Law School. She served as a law clerk to the Honorable Edmund L. Palmieri, Judge of the United States District Court for the Southern District of New York, from 1959–1961. From 1961–1963, she was a research associate and then associate director of the Columbia Law School Project on International Procedure. She was a Professor of Law at Rutgers University School of Law from 1963–1972, and Columbia Law School from 1972–1980, and a fellow at the Center for Advanced Study in the Behavioral Sciences in Stanford, California from 1977–1978. In 1971, she was instrumental in launching the Women’s Rights Project of the American Civil Liberties Union, and served as the ACLU’s General Counsel from 1973–1980, and on the National Board of Directors from 1974–1980. She was appointed a Judge of the United States Court of Appeals for the District of Columbia Circuit in 1980. During her more than 40 years as a Judge and a Justice, she was served by 159 law clerks.

“After months of heated accusations and painstaking negotiations, the White House and the pharmaceutical industry neared agreement late last month on a plan to make good on President Trump’s longstanding promise to lower drug prices,” the New York Times reports.

“The drug companies would spend $150 billion to address out-of-pocket consumer costs and would even pick up the bulk of the co-payments that older Americans shoulder in Medicare’s prescription drug program.”

“Then the agreement collapsed. The breaking point, according to four people familiar with the discussions: Mark Meadows, Mr. Trump’s chief of staff, insisted the drug makers pay for $100 cash cards that would be mailed to seniors before November — ‘Trump Cards,’ some in the industry called them.”

As states continue reopening businesses amid the coronavirus pandemic, Dr. Anthony Fauci told MSNBC that bars and restaurants remain closed to prevent the spread of coronavirus.

Said Fauci: “Bars are a really important place of spreading of infection. There’s no doubt about that. And that becomes particularly important if you happen to be in an area where there’s a high degree of community spread.”

During a press conference, President Trump was asked if he believes he knows better than the experts in his administration, after Trump contradicted the directors of the CDC and the FBI this week, CBS News reports. Said Trump: “Yeah, in many cases, I do.”

H.R. McMaster, President Trump’s former national security adviser, writes in his new book that withdrawing troops from Afghanistan and partnering with the Taliban has made the United States less safe, he tells 60 Minutes.

Said McMaster: “Terrorist organizations who pose a threat to us are stronger now than they were on September 10, 2001.”

“A heavily criticized recommendation from the CDC last month about who should be tested for the coronavirus was not written by CDC scientists and was posted to the agency’s website despite their serious objections,” the New York Times reports.

“The guidance said it was not necessary to test people without symptoms of Covid-19 even if they had been exposed to the virus. It came at a time when public health experts were pushing for more testing rather than less.”

The CDC reversed its controversial Covid-19 testing guidance on Friday, stating clearly that close contacts without any symptoms “need a test,” the Wall Street Journal reports.

Washington Post: “The guidance posted Friday essentially reverts to the CDC’s original recommendation that all people who have had close contact with a person with documented coronavirus infection need to be tested.”

Susan Glasser spoke with Olivia Troye, the former aide to Vice President Mike Pence, who said she was voting for Joe Biden because of President Trump’s bungled coronavirus pandemic response.

“In the end, this is what struck me most during my conversation with Troye: she is young, only forty-three years old, with a long career ahead of her, and she was willing to put it all on the line publicly, whereas people like Mattis and Kelly were not… Troye, with much more to lose—and with none of the stature of a former member of Congress or a former Marine general—had much more courage than all of them.”

“Eric Trump, the president’s son, said that he is willing to be questioned by New York state investigators examining the Trump Organization’s financial practices — but not until after Election Day,” the Washington Post reports.

“Investigators from the New York Attorney General’s office have been seeking to interview Eric Trump since May, as part of an 18-month-long investigation into allegations that the Trump Organization improperly manipulated the value of its properties to obtain loans and tax benefits. Eric Trump worked on some of the key properties.”

Melinda Gates told Axios that the Trump administration has neutered the Centers for Disease Control and Prevention and continued to bungle its coronavirus response, concluding that only a “lack of leadership” explains why far more people have died in the U.S. than in other developed countries.

Washington Post: “V-Dem’s findings are bracing: The United States is undergoing ‘substantial autocratization’ — defined as the loss of democratic traits — that has accelerated precipitously under President Trump. This is particularly alarming in light of what the group’s historic data show: Only 1 in 5 democracies that start down this path are able to reverse the damage before succumbing to full-blown autocracy.”

“The Trump administration on Friday announced $13 billion in additional aid to Puerto Rico to help with rebuilding in the aftermath of 2017’s Hurricane Maria,” CNN reports.

“The move is likely an attempt to appeal to Puerto Rican voters who moved to the battleground state of Florida after the hurricane struck the US territory.”

The Bank of England indicated that it could cut interest rates below zero for the first time in its 326-year history as it tries to shore up a U.K. economic recovery that is facing the dual headwinds of the coronavirus and Brexit, Yahoo Finance reports.

Daily Beast: “Lawyers representing the United States at Julian Assange’s extradition trial in Britain have accepted the claim that the WikiLeaks founder was offered a presidential pardon by a Congressman on the condition that he would help cover up Russia’s involvement in hacking emails from the Democratic National Committee.”