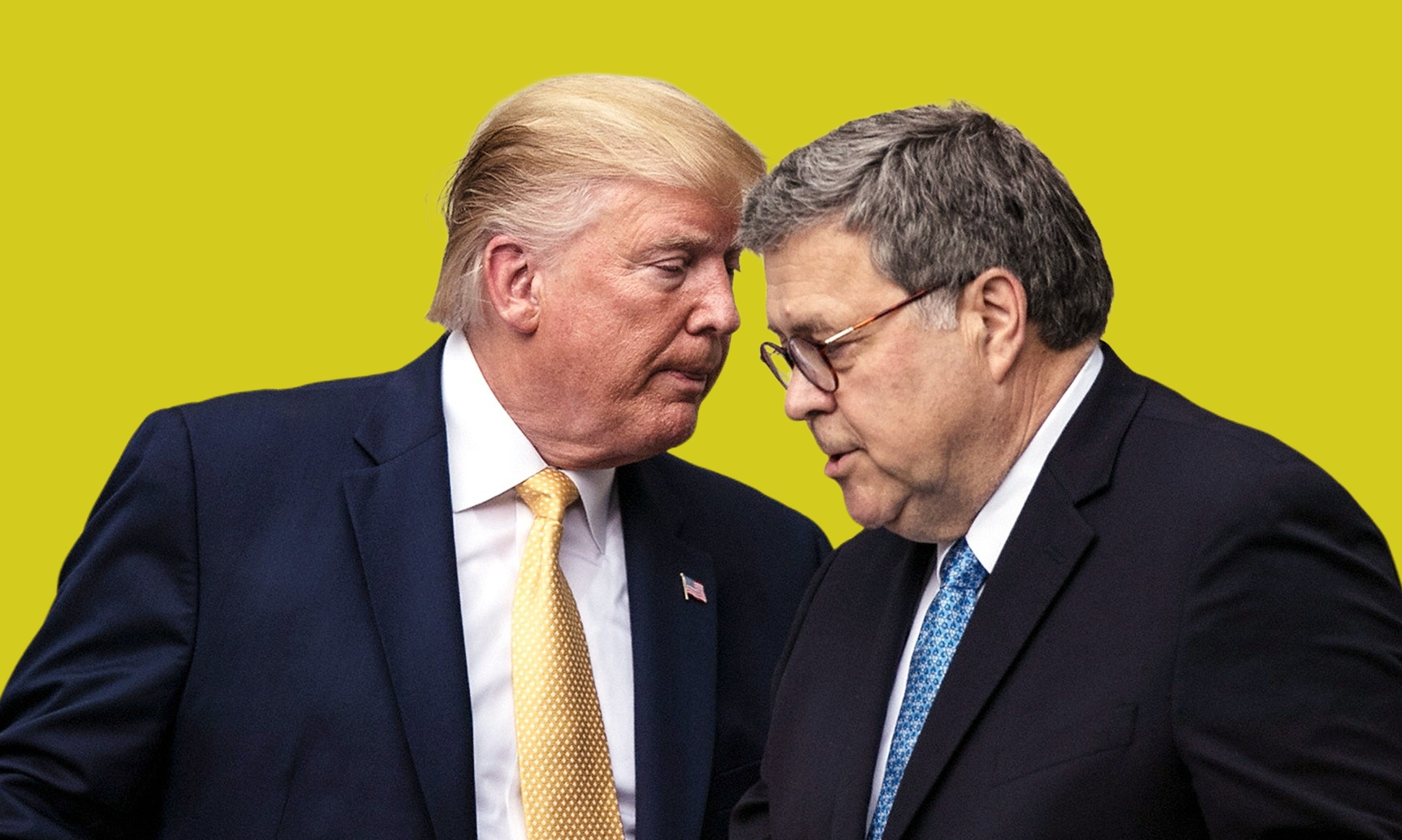 “Attorney General William Barr slammed the hundreds of Justice Department prosecutors working beneath him on Wednesday, equating them to preschoolers, in a defense of his own politically tuned decision making in the Trump administration,” CNN reports.

Said Barr: “Name one successful organization or institution where the lowest level employees’ decisions are deemed sacrosanct, there aren’t. There aren’t any letting the most junior members set the agenda. It might be a good philosophy for a Montessori preschool, but it is no way to run a federal agency.”

The Washington Post reports Barr “delivered a scathing critique” of his own Justice Department, “insisting on his absolute authority to overrule career staff, whom he said too often injected themselves into politics and went ‘headhunting’ for high profile targets.”

Attorney General Bill Barr said that, other than slavery, the lock down and stay-at-home orders to combat the coronavirus are the “greatest intrusion on civil liberties in American history,” CBS News reports.

“President Trump pressed his case that U.S. schools are indoctrinating children with a left-wing agenda hostile to the nation’s Founding Fathers, describing efforts to educate students about racism and slavery as an insult to the nation’s lofty founding principles,” the Washington Postreports.

“Trump, speaking before original copies of the Constitution and Declaration of Independence at the National Archives, characterized demonstrations against racial injustice as ‘left-wing rioting and mayhem’ that ‘are the direct result of decades of left-wing indoctrination in our schools. It’s gone on far too long.’”

Trump also said he would create a national commission to promote “pro-American curriculum that celebrates the truth about our nation’s great history.”

Kushner, seated at the head of the conference table, in a chair taller than all the others, was quick to strike a confrontational tone: “The federal government is not going to lead this response. It’s up to the states to figure out what they want to do.”

He added: “Free markets will solve this. That is not the role of government.”

“Members of the conservative House Freedom Caucus are quietly working to convince GOP leadership to sign off on a long-shot bid to oust Nancy Pelosi from the speakership, which would represent a major affront to the California Democrat if they follow through with the plan,” Politicoreports.

“House Minority Leader Kevin McCarthy is the only GOP member who can offer a ‘motion to vacate the chair’ and force a floor vote on whether Pelosi can retain the speaker’s gavel, according to House rules implemented at the start of this Congress. McCarthy apparently has not yet decided whether he will support the insurgent effort.”

“But McCarthy did agree to hold a GOP conference meeting next Tuesday to discuss the idea… a sign that he is at least giving serious consideration to deploying the procedural weapon. McCarthy did not respond to requests for comment.”

The WHO has warned that coronavirus cases are surging alarmingly in Europe, as a “very serious situation” unfolds across the continent, CNNreports.

“As Covid-19 infections spike to record numbers, European governments are imposing strict local measures and weighing up further lockdowns in a bid to halt a second wave of the pandemic.”

But WHO regional director Hans Kluge said that the increase in cases should serve as a warning of what is to come: “Weekly cases have now exceeded those reported when the pandemic first peaked in Europe in March. Last week, the region’s weekly tally exceeded 300,000 patients.”

“Democrats and Republicans appeared even further away from a coronavirus relief deal on Thursday, despite mounting calls from rank-and-file lawmakers — and even President Donald Trump — for action,” Politico reports.

“With no mood for deal-making in either party, the House and Senate are leaving for the weekend with no progress on an agreement, casting further doubt that Congress can muster the political will to adopt another massive economic stimulus measure before the November election.”

“The number of Americans applying for unemployment benefits fell last week to 860,000, a historically high figure that reflects economic damage from the coronavirus outbreak,” the AP reports.

“Before the pandemic hit the economy, the number signing up for jobless aid had never exceeded 700,000 in a week, even during the depths of the 2007-2009 Great Recession.”

“Hours before federal police officers cleared a crowded park near the White House with smoke and tear gas on June 1, the lead military police officer in the Department of asked if the D.C. National Guard had a kind of military heat ray that might be deployed against demonstrators in the nation’s capital,” NPR reports.

The Washington Post reports federal officials “began to stockpile ammunition and seek devices that could emit deafening sounds and make anyone within range feel like their skin is on fire.”

“President Trump’s luxury properties have charged the U.S. government more than $1.1 million in private transactions since Trump took office — including for room rentals at his Bedminster, N.J., club this spring while it was closed for the coronavirus pandemic,” the Washington Post reports.

New York City Mayor Bill de Blasio “once again delayed the start of most in-person classes in the New York City public schools, acknowledging that the system had still not fully surmounted the many obstacles that it faced in bringing children back during the pandemic,” the New York Timesreports.

“The abrupt announcement was a blow to the mayor’s effort to make New York one of the few major cities in the nation to hold in-person classes. And it threatened to deepen concerns and confusion over whether the mayor and his administration had mishandled the reopening by announcing deadlines and then pushing them back.”

“The Brexit omnishambles threatens to become a full-blown constitutional crisis, now that Boris Johnson’s government has declared its intention to violate international law by breaking the very withdrawal treaty that Johnson negotiated, signed, declared a triumph, and ran on as the basis of his party’s reelection,” Axios reports.

“Five former prime ministers have come out against Johnson’s Internal Market Bill, which has already caused a slew of resignations from the government. The bill would allow the U.K. to unilaterally override the EU in a manner that explicitly violates Britain’s treaty obligations.”

Former model Amy Dorris told The Guardian that Donald Trump sexually assaulted her at the U.S. Open in 1997. Dorris, who was 24 at the time, described her encounter with Trump to The Guardian.

Said Dorris: “He just shoved his tongue down my throat and I was pushing him off. And then that’s when his grip became tighter and his hands were very gropey and all over my butt, my breasts, my back, everything.”

She alleged she told Trump “No, please stop” but “he didn’t care.”

Former President Barack Obama’s memoir will be published in two volumes — with a 768-page Volume 1, A Promised Land, out November 17 in 25 languages.

There is not yet a release date for the second volume.

New York Times: “Demand for the book is expected to be extraordinary, and Crown, an imprint of Penguin Random House, has ordered a first printing for the U.S. edition of 3 million copies. To accommodate such an enormous order, Crown plans to print about 1 million of those books in Germany and has arranged for three ships, outfitted with 112 shipping containers, to bring those copies to the United States.”

“Public health experts reacted with alarm after President Donald Trump held an indoor rally with thousands of maskless supporters at a packed arena in Nevada amid the deadly coronavirus pandemic. But many Republicans on Capitol Hill had a different view. ‘No, it doesn’t,’ said Sen. Josh Hawley, a Missouri Republican, when asked if the rally troubled him at all,” CNN reports.

“After Trump urged his North Carolina supporters to go to the polls even after voting absentee, prompting concerns of people illegally voting twice and also crowding polling places amid the pandemic, Republicans shrugged it off. ‘I’m fine with the fact that they check up on whether their vote counted,’ said Sen. Richard Burr, the state’s senior Republican senator.”

“And after the President’s own admission to Bob Woodward that he played down the coronavirus to avoid a panic, even privately telling the veteran journalist that the virus is five times deadlier than the flu and then saying the opposite publicly, GOP senators in difficult reelection races had no qualms. ‘No,’ Georgia Sen. Kelly Loeffler said when asked if it’s a concern the President lied about the virus. ‘It’s fake news.’”

“The document, which includes quotations from top USPS officials and other specifics, was never sent. But it suggests that the government’s initial interest in tapping the Postal Service as part of its campaign to combat the coronavirus may have been far more advanced than initially reported this spring.”

The FBI announced that Steven Carrillo, the U.S. Air Force sergeant who allegedly murdered law enforcement officers in California during protests earlier this month, was associated with the right-wing Boogaloo movement, and that Carrillo chose the timing of his attacks to “take advantage of a time when this nation was mourning the killing of George Floyd,” Forbes reports.