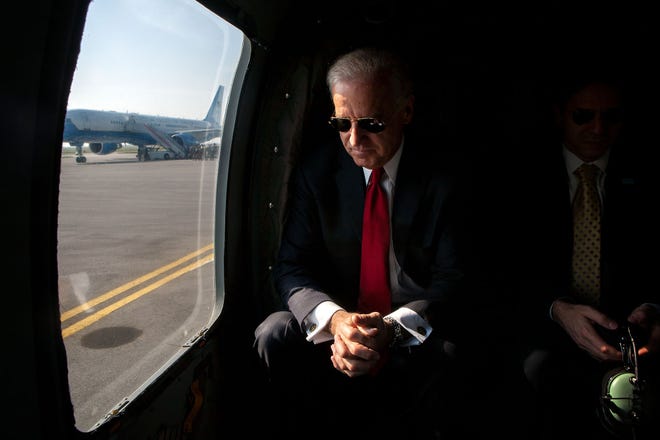 “Overtaking Mr. Biden in some of those four states could be a significant boost to Mr. Trump’s re-election chances. He narrowly won Wisconsin in 2016 and barely lost the other three to Hillary Clinton.”

“While Mr. Trump has steadied his candidacy since his political nadir early in the summer, the Times poll suggests that, less than two months before Election Day, he has yet to achieve the kind of major political breakthrough he needs.”

“Amid a raging pandemic, President Trump has repeatedly choreographed a scene experts warn could lead to illness or even death: Thousands of supporters jammed together, mostly without masks, cheering for a candidate who mocks precautions against the novel coronavirus and has vowed to ignore his own health advisers,” ABC News reports.

“Fighting for reelection amid the COVID-19 outbreak, Trump enters the final stretch of the election increasingly ridiculing and ignoring coronavirus-related restrictions while holding packed campaign rallies across the country.”

“Health experts, meanwhile, warn a bad flu season colliding with the coronavirus could be a devastating double threat to the country.”

Harry Enten: “Let’s state it up front: winning the popular vote means nothing in and of itself. You only become president if you win the Electoral College.”

“That said, the national polling matters a lot. We have a ton of it, unlike in a number of swing states. It’s more accurate than the state polling on average. Most importantly, we have a fairly good idea of what Biden’s margin needs to be nationally in order to win in the Electoral College.”

Key takeaway: “If Biden wins by more than 5 points nationally, he’s almost certainly going to win enough electoral votes to get to at least 270 and take the Electoral College. There’s simply little record of a difference between the margin in the key swing states and the national vote being greater than 5 points.”

“If Biden wins by somewhere between 3 and 5 points nationally, he’ll be the clear favorite in the Electoral College, even if there is some non-negligible chance Trump could emerge victorious.”

More Harry Enten: “Some people call Donald Trump’s term in office the ‘nothing matters’ presidency. The phrase is usually applied to Trump by his detractors, who cannot believe his standing with the American public is stable despite what he says and does. They mean it as good news for Trump.”

“Yet the numbers suggest something quite different. Nothing may really matter, but that’s actually bad news for Trump and good news for his opponent, Joe Biden.”

“The fact is that Trump doesn’t need stability. He needs something to change because he’s unpopular and losing the race for a second term.”

Wall Street Journal: “Billionaire investor Warren Buffett was an active fundraiser and campaigner for the past two Democratic presidential nominees. In 2020, he’s yet to become publicly involved with former Vice President Joe Biden’s bid to reclaim the White House for Democrats.”

“His absence is notable for several reasons, including that he’s the most famous resident of Nebraska’s Second Congressional District. The Omaha-area enclave, which features one of this year’s most competitive House races, awards one Electoral College vote as part of a system used only by Nebraska and Maine that is unlike the winner-take-all methods elsewhere.”

“Mike Bloomberg plans to spend at least $100 million in Florida to help elect Democrat Joe Biden, a massive late-stage infusion of cash that could reshape the presidential contest in a costly toss-up state central to President Trump’s reelection hopes,” the Washington Post reports.

“Bloomberg made the decision to focus his final election spending on Florida last week, after news reports that Trump had considered spending as much as $100 million of his own money in the final weeks of the campaign, Bloomberg’s advisers said. Presented with several options on how to make good on an earlier promise to help elect Biden, Bloomberg decided that a narrow focus on Florida was the best use of his money.”

“Coronavirus infections in the Dakotas are growing faster than anywhere else in the nation, fueling impassioned debates over masks and personal freedom after months in which the two states avoided the worst of the pandemic,” the AP reports.

David Legates, a University of Delaware professor of climatology who has spent much of his career questioning basic tenets of climate science, has been hired for a top position at the National Oceanic and Atmospheric Administration, NPR reports.

“Legates has a long history of using his position as an academic scientist to publicly cast doubt on climate science. His appointment to NOAA comes as Americans face profound threats stoked by climate change, from the vast, deadly wildfires in the West to an unusually active hurricane season in the South and East.”

A state judge ruled that Kanye West did not qualify to get on the Wisconsin presidential ballot because 5 p.m. means 5 p.m. sharp, the Milwaukee Journal Sentinel reports.

The entertainer sued seeking to undo an Aug. 20 decision to keep him off the ballot in November because he was seconds late in filing his nomination papers.

Dan Balz: “President Trump had a bad week: That was the week before last. He had another one this past week. For someone trailing former vice president Joe Biden in the presidential race, Trump remains the biggest obstacle to reelection, an embattled incumbent who is frittering away the advantages of incumbency.”

In an interview with Alex Jones, Roger Stone urged Donald Trump to consider several draconian measures to stay in power if he loses the election due what he called “voter fraud.”

John Haywood: “With support hovering around 43% nationally, Trump needs a chunk of new supporters to overcome Democratic nominee Joe Biden’s lead. He has just more than seven weeks to lure them. And he faces a significant obstacle that he didn’t in 2016: a smaller pool of available prospects.”

“Outsized attention to Trump’s base, most conspicuously the maskless true-believers who pack his rallies despite the coronavirus pandemic, obscures the reality that they number too few to give him a second term. Though Trump eked out an electoral victory four years ago with 46.1% of the popular vote, he cannot repeat that feat with 43%.”

Politico: “In 2016, Mormons rejected Donald Trump in numbers unheard of for a Republican nominee — viewing the thrice-married, immigrant-bashing Republican as an affront to their values.”

“In 2020, the president is going all-out to change Mormons minds — a little-noticed effort that could make or break him in Arizona and Nevada, home to more than a half-million Latter-day Saints combined. Joe Biden’s campaign, sensing an unlikely opening for a Democrat, is also targeting Mormons in the pair of Western swing states.”

“If any state is positioned to go from blue to red in 2020, to embrace the fullness of Trumpology and provide the president some much-needed Electoral College insurance, it is Minnesota,” the New York Times reports.

“The state’s northern and eastern regions have grown more conservative over the years, and Republicans won two House seats in the state during the 2018 midterm elections — a rare bright spot during an election characterized by an anti-Trump wave. Going into 2020, conservatives crowed that the issues that defined the state’s politics were straight from Mr. Trump’s playbook: in particular, a robust refugee relocation program that has inspired a white backlash in certain places outside the Twin Cities.”

“Mr. Biden’s advantage is driven by an erosion of Republican support for Mr. Trump in the state’s metropolitan areas, continuing the trend of suburban voters’ fleeing a president in crisis.”