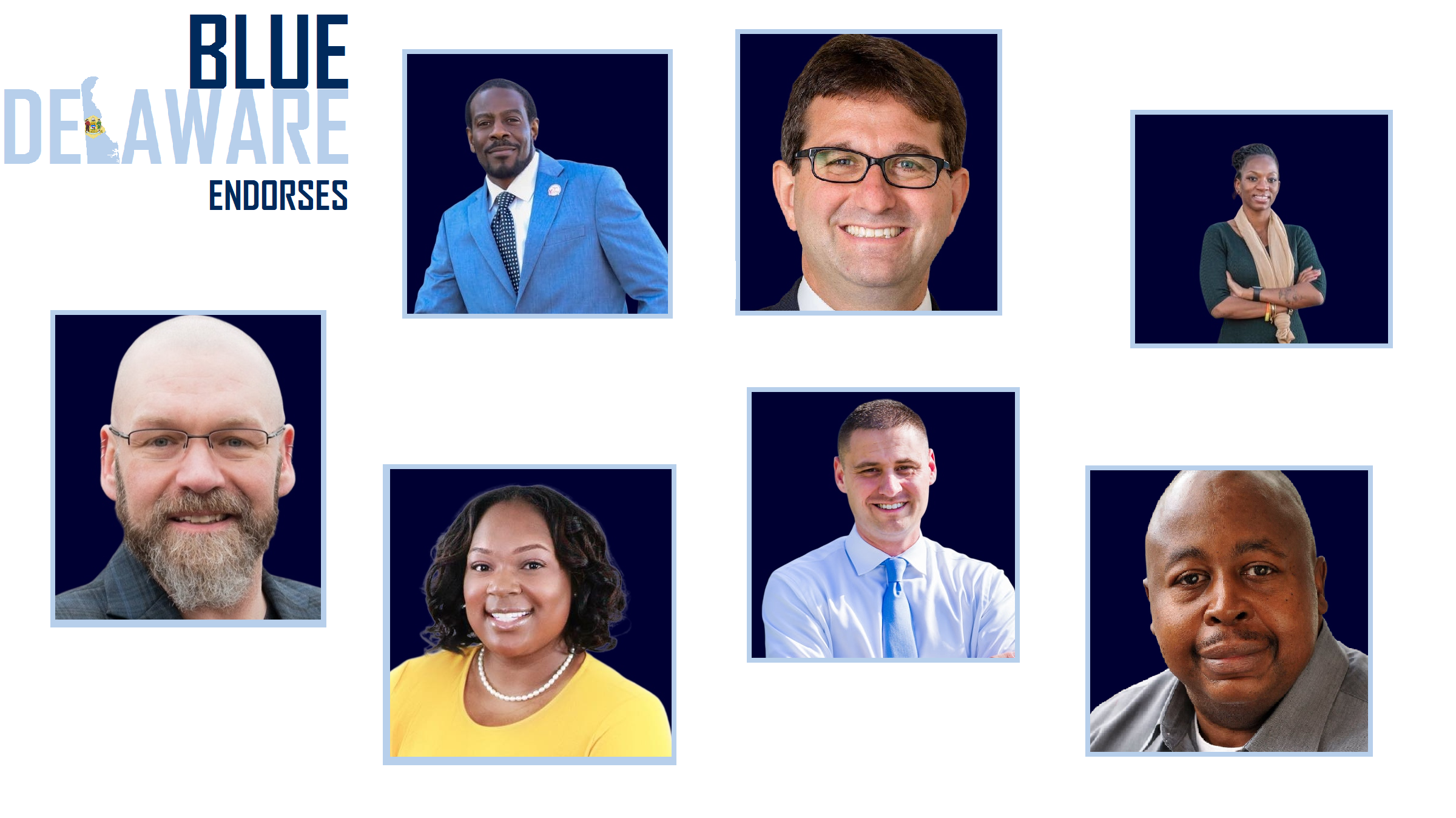 We won’t be endorsing in every race. Like Governor and Insurance Commissioner. Or the U.S. Senate primary. We instead wanted to focus on the General Assembly and county and city races that need our attention the most, because it is those races that often voters are left making last minute decisions because they know little about the candidates. It is the irony of our Democracy: everyone knows who the President is. Most know who their U.S. Senator is. But the local councilman or State Representative or Senator, the officials that can most affect your life and the officials that you are most responsive (or at least should be) to you and your concerns, are often unknown.

Here are our endorsements in those races, but we will save the City of Wilmington for last because we have a lot to say about those races.

We have a progressive Democrat in the County Executive office and in the 10th RD, and we want to keep them there. The rest of the endorsed candidates will bring a more progressive viewpoint, a younger generation’s mindset, more women’s voices, and more LGBTQ voices to the General Assembly and the New Castle County Council. And with respect to Ciro Poppiti and the New Castle County Council President’s office, we are hoping he brings competence and kindness to the office again.

And now for the City. As we have said before, the purpose of this primary election is to get all Potters and Potter allies out of the city government. They are nothing but corrupt grifters and want power only for themselves. They are not progressives.

Now, to do this, we have to endorse and vote for candidates that are also not that progressive, but at least they are not corrupt and/or incompetent.

Wilmington Mayor — Mike Purzycki. The incumbent Mayor has done a good job at running the city (certainly better than Dennis Williams) and has a vision that you can get behind.  Velda Jones Potter is there for the grift and the revenge — she and her husband are still smarting after losing the revenue stream associated with losing control of Channel 28 and carrying around a list of injustices done to them that they’ll likely address. Just remember, a vote for Velda is a vote for Charles Potter to have a desk on the 9th floor. Justen Wight is in for family rivalry and because former Mayor Dennis Williams recruited him.  He was always a back bencher in Council and with Williams as his advocate, you know he’ll be a bad Mayor.

Wilmington City Council President — Hanifa Shabazz. Ugh. This is a lesser of two evils endorsement. Trippi Congo is a Potter ally. It is far better for the city that he loses.

Wilmington  Treasurer — DaWayne Sims.  Sims got into this race late, but he does have the city government and financial background to be a good steward of the city’s accounts here. He’s personable, reasonable, can read a spreadsheet, and knows how to make use of the data and analytics that display on the Bloomberg terminal. Vash Turner was a mostly absent City Councilman who couldn’t follow the budget as it was presented each year in Council — much less engage meaningfully on it.  He doesn’t know a thing about complex finance.  Wilmington needs our bond rating intact, needs our pensions to be well invested, and needs to show sober financial leadership to make sure Dover has the confidence to sned the city funds, especially since the city is about to get slammed by reduced revenues next year.  Turner has no idea about any of this.  He has been trying to sell people on an MLM bitcoin backed by gold that has been a boondoggle all over the world.  If he didn’t know better than to get involved with this bogus gold deal (when it is easier and cheaper to just buy gold on the spot market), he has no business anywhere near Wilmington’s accounts.

Wilmington City Council 1st District — Albert Mills. Mills was robbed during the effort to replace Nnamdi Chuwocha on Council by the disinformation and antics of Guy, Turner, Dixon, Carter, Williams — who were trying to make sure that no one else got on Council who might actually work with the Mayor.  He’s a solid community guy, has been effective and active throughout the community for many years, and is well trusted.  Gray interviewed well, but is another one who has abandoned representing her district’s interests in favor of following Sam Guy.

Wilmington City Council 2nd District — John Johnson, Jr. He is a thoughtful and focused union leader who will engage for the betterment of his area (unlike his predecessor). Billy Lane is a Potter ally.  Unfortunately, it appears that Shane Darby-Bey is as well (she’s endorsed Velda Jones Potter and Trippi Congo), but she also comes with some retrograde views on vaccination and on white people.  Not that white people don’t need to be held to account, but you have to be able to represent everybody and that doesn’t look like her project.  Besides, she needs to get clear on what Wilmington government can actually do.  Dorothy King used to be NPC President and that hasn’t prepared her for this job at all.

Wilmington City Council 3rd and 4th District — We are not endorsing either candidate in either race.

Wilmington City Council 5th District — Bregetta Fields. Fields is a long time community activist who is the daughter of a legendary community activist.  She is clear about the neighborhood challenges and should be present here in a way that previous council people have not been.  Willauer has been trying to stop the Blight Bill for reasons that never made any sense (specifically misrepresenting its terms and its legislative evolution to her followers, and trying to take credit for changes to this bill that were literally made by Bud Freel in response to his colleagues) in a district that badly needs the excesses of slumlords addressed.

Wilmington City Council 6th District — Ian Smith.  There was a debate a month ago for this race and Smith ran away with this debate.  Thoughtful, clearly ready to lead, and clearly ready to engage with the 6th’s distinctive issues.  He’s going to get done things that the current incumbent is not even working on.

Wilmington City Council 7th District — Chris Johnson. Chris was the favorite here for the AG primary in 2018.  He stood for the appointment to the Council seat Bob Williams vacated and he’s been a fantastic leader.  He’s been working with the Mayor and the Chief for a real Civilian oversight board and has been at the forefront of trying to address criminal justice issues in the city. His voice has been needed and he needs Councilmembers who will help him.  Chris is the only Council replacement appointment who is getting in real work.  Hynson is part of the Potter/Guy crew who periodically runs when they need him to. He was also part of the controversial Education Voices boondoggle shadily funded by previous (and currently indicted) Council President Theo Gregory. A vote for Hynson is a vote for a Sam Guy mouthpiece.

Wilmington City Council 8th District — Sean Barney. Barney was the Ward leader in that District and has the support of many community leaders here.  He’s another who will be thoughtful and focused on his District, including understanding the constituent service part.  The 8th needs someone who will help this district keep its hard-won stability as well as someone who will work on Council for the city wide improvements that are needed.

Wilmington City Council At Large — You can vote for up to 3 candidates. So we are basically in Do No Harm mode here — looking for more stabilization and focus of Council. (If you saw the last Council meeting where they were to vote on the funds to support an investigation into Trippi Congo’s residency, you can see it. Guy is yelling at his allies to Vote No on the legislation and so they did. Wilmington deserves much better than this.) Sam Guy, Charles Potter, Tyrone Johnson are all Potters or Potter allies. So don’t vote for them. None of them will represent anyone other than themselves. Vote for Maria Cabrera, Robert Oliver, and Loretta Walsh. 2021 is going to be a tough year for Wilmington — revenues will be very much reduced over 2020 and Council will need people who will seriously tackle that issue, not just perform for the cameras. We know that Rysheema is a progressive favorite, but we are not going to endorse her here because we have concerns that she is too aligned with Sam Guy and his continued efforts to hijack the Council from being a co-equal branch of Government to being the Stop Any Progress At ALL Team, even when there was little to fight over. We had hoped she would be a young leader in this council and turns out she’s a follower of Sam Guy and all of his misogyny.