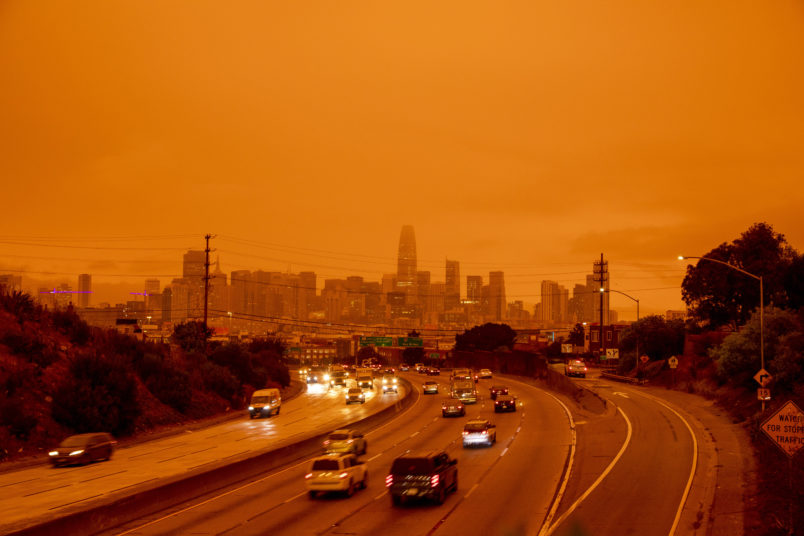 “The global economy is bouncing back strongly from the collapse it suffered in the spring, but fresh data suggest the early gains from the lifting of coronavirus lockdowns are already exhausted, adding to evidence that the world economy could take many months, if not years, to heal,” the Wall Street Journal reports.

Adam Ozimek: “Despite the bounce back, we are still down more jobs than the worst of the Great Recession.“

“The Trump administration has secretly siphoned nearly $4 million away from a program that tracks and treats FDNY firefighters and medics suffering from 9/11 related illnesses,” the New York Daily News reports.

Amber Phillips: “Over the past 24 hours on his Twitter feed, President Trump has attacked Democrats and racial injustice protesters nearly a dozen times, mentioned law and order, and made false claims about mail voting.”

“But on the increasingly deadly, catastrophic wildfires in California and Oregon that have displaced 500,000 people, caused fire tornadoes, killed a 1-year-old, and blotted out the sun in one of America’s largest metropolitan areas, he’s been silent.”

“The crisis in the nation’s most populous state is more than just an accumulation of individual catastrophes. It is also an example of something climate experts have long worried about, but which few expected to see so soon: a cascade effect, in which a series of disasters overlap, triggering or amplifying each other.”

Green That Life: Why protecting the environment is more important than ever.

“Law enforcement agencies described 911 dispatchers being overrun with calls about a false online rumor that ‘Antifa’ members had been arrested for setting the fires — a claim promoted by the anonymous account behind the QAnon conspiracy theories,” CNN reports.

“The incident highlights how online conspiracy theories, a sustained right-wing campaign to create increased fear of anti-fascist groups, and amplification of false claims by QAnon followers, have real consequences.”

Ben Collins: “Nobody is appropriately gauging how quickly QAnon (and Q by other names) has taken over among suburban and rural white women. It is everywhere.“

“Federal prosecutor Nora Dannehy, a top aide to U.S. Attorney John H. Durham in his Russia investigation, has quietly resigned from the U.S. Justice Department probe – at least partly out of concern that the investigative team is being pressed for political reasons to produce a report before its work is done,” the Hartford Courant reports.

“Colleagues said Dannehy is not a supporter of President Trump and has been concerned in recent weeks by what she believed was pressure from Barr — who appointed Durham — to produce results before the election. They said she has been considering resignation for weeks, conflicted by loyalty to Durham and concern about politics.”

BuzzFeed News reports that during the summer of 2016, Trump backer and investor Peter Thiel “hosted a dinner with one of the most influential and vocal white nationalists in modern-day America — a man who has called for the creation of a white ethnostate and played a key role in an effort to mainstream white nationalism as the ‘alt-right.’ And then Thiel emailed the next day to say how much he’d enjoyed his company.”

“Among those on the racist right, Thiel’s outreach raised hopes that his financial bet on Trump would extend into the ascendant alt-right movement, which despite its prominence was a collection of small and often cash-strapped organizations. One avowed white nationalist privately speculated that Thiel’s money and influence could have made him ‘our George Soros.’”

“The state Department of Health has tried to directly quash reporting on the virus in some instances, after DeSantis said K-12 testing data ‘needs to be put in the right context.’”

“Secretary of State Mike Pompeo assigned official government work to one of his top advisers through his wife, Susan, who used a private email account to relay his requests,” McClatchy reports.

“The spouse of a Cabinet member would not be expected to have a government email account if they are not employed by the government. But Susan Pompeo’s influence over official personnel and activities at the State Department has raised concerns on Capitol Hill and within the department.”

The Los Angeles Times reports the coronavirus may have reached Los Angeles even before China announced its outbreak.

“Researchers from UCLA and their colleagues at the University of Washington documented an unmistakable uptick in patients seeking treatment for coughs. The increase began the week of Dec. 22, 2019, and persisted through the end of February.”

A retired judge appointed to review the Justice Department’s motion to drop charges against former national security adviser Michael Flynn said on Friday that calling the agency’s actions “irregular,” which he did in June, “would be a study in understatement,” Axios reports.

Said Judge John Gleeson: “In the United States, Presidents do not orchestrate pressure campaigns to get the Justice Department to drop charges against defendants who have pleaded guilty — twice, before two different judges — and whose guilt is obvious… There is clear evidence that this motion reflects a corrupt and politically motivated favor unworthy of our justice system.”

“The Trump administration flew immigrant detainees to Virginia this summer to facilitate the rapid deployment of Homeland Security tactical teams to quell protests in Washington, circumventing restrictions on the use of charter flights for employee travel,” the Washington Post reports.

“After the transfer, dozens of the new arrivals tested positive for the novel coronavirus, fueling an outbreak at the Farmville, Va., immigration jail that infected more than 300 inmates, one of whom died.”

Dr. Anthony Fauci was asked on MSNBC where were are “rounding the final turn” on the coronavirus, as President Trump claimed yesterday. Said Fauci: “I have to disagree with that, because if you look at … the statistics they are disturbing. We’re plateauing at around 40,000 cases a day. And the deaths are around a thousand.”

Fauci also warned that in the coming months, the coronavirus pandemic would likely worsen, CNN reports. Fauci: “We need to hunker down and get through this fall and winter because it’s not going to be easy.” He added that “every time” restrictions are lifted during the coronavirus crisis, “we get a blip,” adding, “it’s whack-a-mole.”

Fauci told MSNBC he doesn’t see the country returning to pre-pandemic “normality” for many more months. Said Fauci: “If you’re talking about getting back to a degree of normality, which resembles where we were prior to COVID, it’s gonna be well into 2021. Maybe even towards the end of 2021.”

New York Times: “Mr. Trump called Mr. Woodward at night when aides presumably were not around. He gave Mr. Woodward a phone number so that the author could call in and leave a message to have him call back without going through the elaborate bureaucracy that a presidential interview involves in a normal White House. Altogether, they talked 17 times before the book was finished and then an 18th time after the draft was done but before it went to press.”

“Mr. Trump called once more on Aug. 14, for a 19th conversation, hoping to persuade Mr. Woodward to include the recently brokered diplomatic breakthrough with Israel and the United Arab Emirates, but it was too late to update the book by that point.”

“To Mr. Trump, Mr. Woodward is an exemplar of the Washington establishment the president believes has never respected him. He seemed excited to be talking with him. At one point, according to the book, when Melania Trump walked in, the president boasted, ‘Honey, I’m talking to Bob Woodward.’”

Bob Woodward told CNN that he has 10 hours of audio of interviews with President Trump for his new book, some lasting more than half an hour, spread over 19 taped phone calls, often initiated by Trump. There were originally reported to be only 18 interviews.

Politico: “New revelations from Trump’s interviews with Woodward early in the crisis are raising a new set of questions that are threatening to swamp his administration and campaign just over 50 days from the November election. While Trump keeps trying to turn attention toward his favorite issues — culture wars, law and order or new promises to his base like potential conservative judicial appointees — Woodward’s book and the timeline it presents has forced the Trump administration into precisely the position it’s wanted to avoid: litigating the early stages of its response to a pandemic that has now killed more than 190,000 Americans.”

“Some White House aides privately acknowledge it was a wasted month. Democrats and other critics say the delay in giving out timely and clear information — especially after those fateful days in early February — caused untold thousands more deaths than necessary and deeper economic wreckage than the U.S. might have endured if it had responded earlier.”