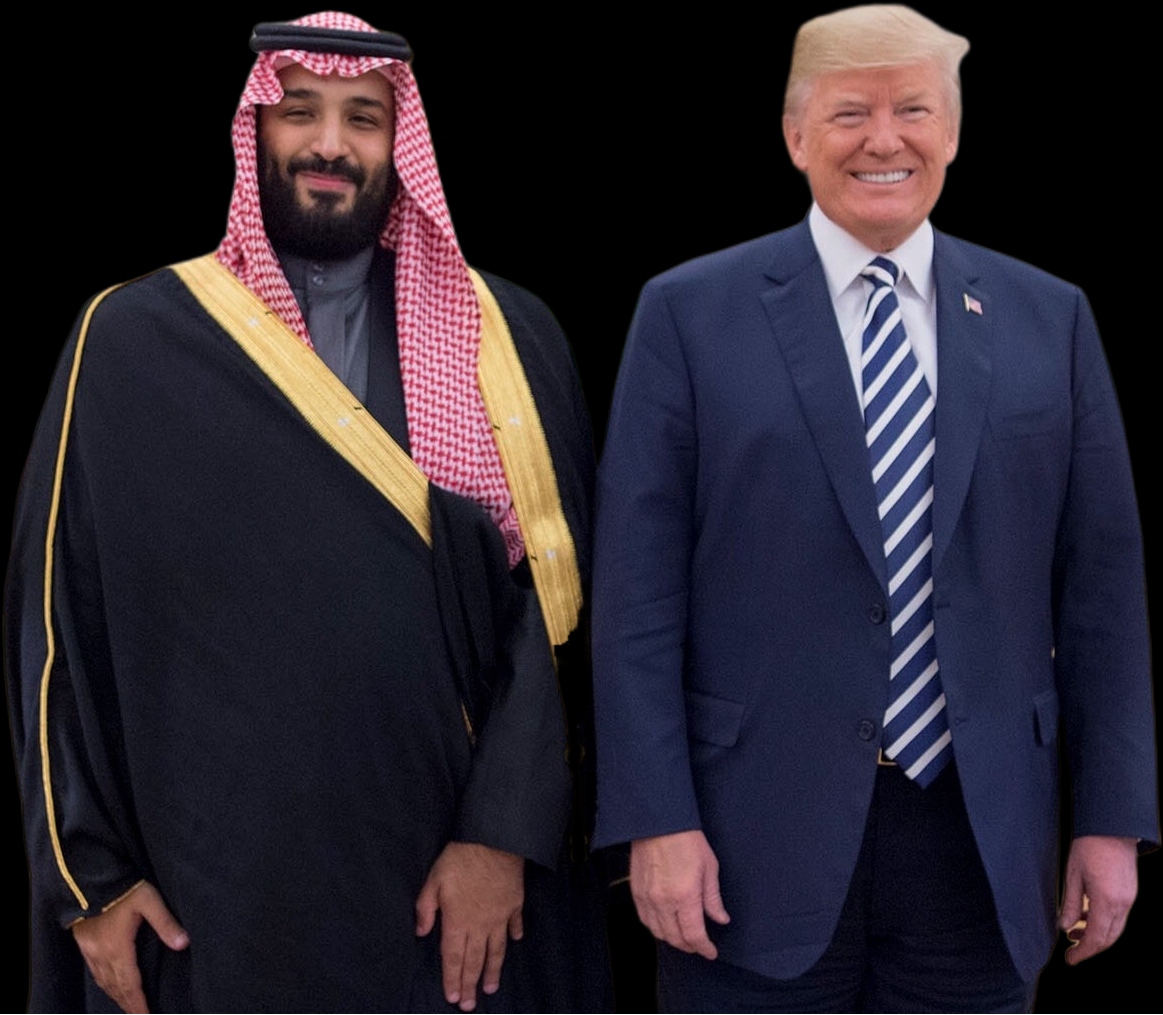 The president also told Woodward he doesn’t believe MBS ordered Khashoggi’s murder, despite the fact that the US and other foreign intelligence services concluded he personally ordered the attack.

“A visibly agitated and angry President Trump on Thursday defended his decision to intentionally mislead the public about the lethality of the novel coronavirus by saying he had an obligation as the nation’s leader to prevent panic,” the Washington Post reports.

“Staring down reporters at a White House news conference in the wake of revelations from Bob Woodward’s new book, Rage, Trump cast his deception as a virtue — a president instilling calm to protect the people.”

Said Trump: “I don’t want to jump up and down and start screaming ‘Death! Death!’ because that’s not what it’s all about. We have to lead a country. There has to be a calmness.”

“Trump evidently did not feel the same presidential obligation to imbue serenity a few hours earlier, however, when he sounded the alarm on Twitter about a number of other topics.”

President Trump bragged to Bob Woodward that North Korean leader Kim Jong Un “tells me everything,” including a graphic account of Kim having his uncle killed, the Washington Post reports.

Trump defended his decision to talk to Bob Woodward but said he doesn’t have time to read the book, The Hill reports. Because he can’t read. Yet he has time to watch Fox News day and night, which he admitted to doing in his press conference yesterday. Said Trump: “don’t know if the book is good or bad. I have no idea. Probably — almost definitely won’t read it, because I don’t have time to read it. But I gave it a little bit of a shot. Sounds like it’s not going to be good.”

White House Chief of Staff Mark Meadows told Fox News he wouldn’t have recommended that Bob Woodward gain the extensive White House access the journalist did for his interviews with Trump.

Meadows added he wasn’t surprised to learn that Woodward and Trump had spoken on the phone at great lengths because it’s “typical” of the president to do so as he “believes that he has nothing to hide” and is “willing to talk to anybody about any subject no matter how difficult.”

Daily Beast: Trump was “ecstatic” about talking to Woodward.

Tucker Carlson claims he has a source who told him that it was Sen. Lindsey Graham (R-SC) who brokered the interview between President Trump and Bob Woodward.

Washington Post: “The president’s top political advisers, including campaign manager Bill Stepien, have long viewed the coronavirus as the president’s biggest albatross and have argued for Trump to address it more forcefully. The book, particularly with the audio, could be a potent attack area for Biden’s campaign, Republicans close to Trump said, with internal and public polling consistently showing a majority of voters do not agree with the president’s response to the pandemic.”

Said one campaign adviser: “Our problem is that every day we are focused on something other than defining Joe Biden as a liberal is a bad day for us.”

“Senate Republicans plan to force a vote Thursday on their substantially scaled-back stimulus plan, in a maneuver all but guaranteed to fail amid opposition by Democrats who call the measure inadequate,” the New York Times reports. And indeed the bill did fail, 52 to 47 (it needed 60 votes to get past the filibuster). All Democrats and Rand Paul voted against it, while Kamala Harris missed the vote due to her being on the campaign trail in Florida).

This is the bill that would have bailed out the dying coal industry to the tune of $160 billion while providing nothing to the out of work middle class. It also would have provided a liability shield to all corporations and businesses in the country so that they can force people back to work in unsafe places and then not be sued when everyone dies of COVID. So it is a good thing the bill is dead.

Asked if he thinks Donald Trump is a net positive for Senate Republican candidates on the ticket, Senate Majority Leader Mitch McConnell would only tell CNN: “We’ll find out. That’s something that we’ll only know the day after the election.”

McConnell said it’s “just a hugely challenging cycle to hold onto” the majority and said it’s a “50-50 situation,” arguing that races in Montana, Colorado, Arizona, Iowa, North Carolina, Maine and Georgia are far too close to call.

He added: “That’s why I describe it like a knife fight in an alley. Everybody’s slugging it out.”

First Read: “The first week of campaigning after Labor Day is now halfway over, and President Trump is once again playing defense – on the Bob Woodward book, on another whistleblower’s allegations, and on a report that an administration official was trying to muzzle Dr. Anthony Fauci.”

“It comes after he was already on his heels over the Atlantic article that accused him of disparaging U.S. war dead.”

“And it comes after Trump TRIED to play offense on ‘law and order’ after the James Blake police shooting in Kenosha – and he’s still trailing in all-important Wisconsin.”

“No, this presidential contest isn’t over. But Trump, with 54 days until Election Day, is running out of time to turn the race from a referendum on him to a choice election against Joe Biden.”

Daily Kos: “Twenty-five weeks ago, the nation’s state employment offices began seeing a tsunami of applications for unemployment insurance payments that has yet to subside. According to the Department of Labor, for the week ending Sept. 5, another 1.7 million new applicants—90,000 more than the previous week—sought jobless aid from the program New Deal Democrats instituted 85 years ago and that Republicans have been trying to kneecap or dismantle ever since. As has been the case for weeks, media headlines (and sometimes their stories) only counted the 884,000 new applicants for regular state programs and not the 839,000 who applied for Pandemic Unemployment Insurance that covers gig workers and free-lancers ineligible for regular benefits.”

Nicholas Kristoff: “The newest Social Progress Index, shared with me before its official release Thursday morning, finds that out of 163 countries assessed worldwide, the United States, Brazil and Hungary are the only ones in which people are worse off than when the index began in 2011. And the declines in Brazil and Hungary were smaller than America’s.”

“Many postal service employees confirmed that the removal of outdated machines was routine, but raised concerns of doing so in an election year where millions of Americans are expected to vote by mail.”

President Trump again tried to deflect responsibility for the country’s exploding coronavirus death toll by blaming China for the pandemic, but expressed confidence that the U.S. was in the final stretch of its crisis.

Said Trump: “We’re rounding the final turn, and a lot of good things are happening.”

Karen Tumulty: “It is hardly surprising when President Trump says something that turns out not to be true.”

“What has not always been clear, however, is what drives him to lie so constantly. Is it because he’s ignorant? Or because he is deluded? Or simply that he is malevolent? The possibilities are not necessarily exclusive of one another.”

“Now, thanks to The Post’s Bob Woodward, we have learned the answer with regard to what history is likely to rank as perhaps the most consequential of all the falsehoods that Trump has uttered.”

Rich Lowry: “How to handle Woodward is a challenge for any White House, but putting Trump on the phone with him for hours was bound, ultimately, to be an exercise in masochism. By talking to Woodward at such length, Trump has, in effect, authored his own tell-all book to compete with those of his niece and his former fixer.”

“If a Kinsley gaffe is when a politician tells the truth, the Woodward book is a Kinsley revelation, confirming what everyone already knew to be true.”

David Remnick: “Trump’s Presidency has been appalling––but not unpredictably so. That he would bring misery and division to this country should have been obvious from the start. Flagrantly corrupt and instinctually autocratic, he immediately set about threatening democratic values and the rule of law, while encouraging autocrats abroad and white nationalists at home. He has aroused hatred for the free press and slimed the patriotism of everyone from John McCain to John Lewis.”

“It is a painful thing to say, but the evidence assaults us daily: Trump is a miserable human being. Ask his sister, a retired federal judge; in a taped conversation with the President’s niece, she refers to him as “cruel.” It is the rare adviser or satrap who leaves the White House and does not hasten to write a memoir or speak to the press with the intention of sounding a common alarm, that Trump poses a threat to national security even more profound than the news-weary public can imagine.”

John Harris: “For years, President Donald Trump and his allies have warned about his adversaries in the ‘Deep State.’ The phrase evokes images of anonymous officials with hidden motives buried deep in the government.”

“Recent days have made it clearer than ever that the real hazard to Trump is actually the Shallow State. The people saying mean things about Trump aren’t lurking in the shadows. They are well-known names whom Trump recruited to work by his side. Their motives aren’t mysterious. They are obvious: A transactional president encourages transactional behavior in his midst. These sources have shocking stories to tell, but no longer any genuinely surprising ones.”

David Frum: “One of the most striking things about Trump is how seldom, if ever, anybody tells a story of kindness and compassion about him. Not even his own children have much to say… Few former employees of the Trump administration praise him as a boss. Few business partners speak of his honesty. Few tenants of Trump buildings have anything good to say about the homes he supposedly built. Few officials of any city have been willing to celebrate any contribution to urban life. Few beneficiaries of any Trump philanthropy.”

“Imagine a man who has lived in the public eye for half a century, supposedly one of the country’s leading business figures, and when in trouble he struggles to summon credible or trustworthy witnesses from outside the Fox Cinematic Universe. There’s just a gaping zero where goodness should be.”