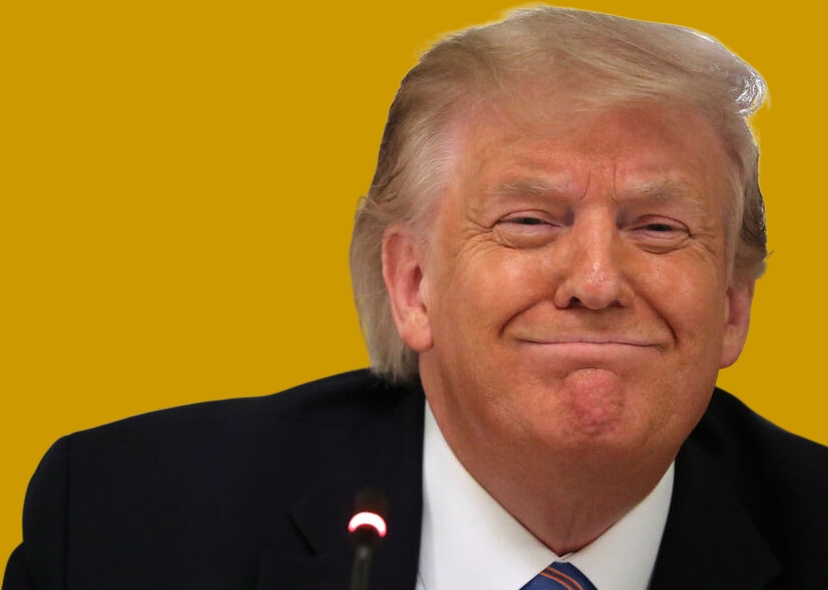 In a recorded call, President Trump called Bob Woodward on February 7 and revealed that he thought the coronavirus pandemic was far more dire than what he had been saying publicly, the Washington Post reports.

Said Trump: “You just breathe the air and that’s how it’s passed. And so that’s a very tricky one. That’s a very delicate one. It’s also more deadly than even your strenuous flu. This is deadly stuff.”

“At that time, Trump was telling the nation that the virus was no worse than a seasonal flu, predicting it would soon disappear, and insisting that the U.S. government had it totally under control. It would be several weeks before he would publicly acknowledge that the virus was no ordinary flu and that it could be transmitted through the air.”

The interview was recorded and is detailed in Woodward’s new book, Rage.

Maggie Haberman of the New York Times tweets that excerpts of the new Bob Woodward book, Rage, have stirred up the White House: “There is an epic amount of finger-pointing going on at the White House right now about who’s to blame for a group of grown adults in serious positions in government — and in one case the president — talking to Woodward.”

White House officials warned President Trump that talking to Bob Woodward was a bad idea, CNN reports. But Trump went forward with the hours of interviews anyway. A source, who has direct knowledge of discussions, said Trump and Jared Kushner thought Woodward interviews were a good idea. Kushner is “quoted extensively” in the book, the Washington Post reports.

Talking Points Memo: “Democratic presidential candidate Joe Biden tore into President Donald Trump on Wednesday after Washington Post journalist Bob Woodward released audio recordings of Trump privately admitting back in early 2020 that COVID-19 was a serious threat and that he was downplaying it on purpose. During a campaign stop in Warren, Michigan Wednesday, Biden said Trump had “knowingly and willingly lied” to the country.

“He knew how dangerous it was. And while this deadly disease ripped through our nation, he failed do his job on purpose,” the former vice president told the audience. “It was a life-and-death betrayal of the American people.” Biden also hit Trump on the economic damage brought on by the President’s “negligence” throughout the pandemic. “It’s beyond despicable,” the Democratic candidate said. “It’s a dereliction of duty. It’s a disgrace.”

Joe Biden told CNN it is “disgusting” and “almost criminal” that President Trump knew of the serious risk posed by the coronavirus in February and then downplayed its threat in March.

Said Biden: “This caused people to die. And what did he do the whole time? He acknowledged this — you breathe it, it’s in the air — and he won’t put on a mask. He’s talking about, ‘It’s ridiculous to put on a mask, what do you need social distancing for? Why have any of these rules?’”

CNN: “So confident was Trump he could generate a favorable depiction that he provided Woodward with his personal cellphone number, eager to speak with a man whose long record of interviewing his predecessors has not exactly produced flattering results.”

“In phone calls late at night from the White House residence, Trump spun his tenure as one of historic successes and unparalleled victory…”

“While Trump conducted two interviews for the book in the Oval Office surrounded by aides… his subsequent conversations were often only him and Woodward on the phone.”

Bob Woodward will appear on 60 Minutes to discuss the revelations in his new book about President Trump, CBS News reports. Rage was reported from interviews Woodward was allowed with the president totaling an unprecedented nine hours — all of which were recorded. Viewers will be able to hear Trump in audio excerpts.

“Not to mention my fucking generals are a bunch of pussies. They care more about their alliances than they do about trade deals.” — President Trump, quoted by Bob Woodward in Rage, according to the Washington Post.

President Trump told Bob Woodward for his book, Rage, about a new nuclear program USA Today reports. Said Trump: “I have built a nuclear — a weapons system that nobody’s ever had in this country before. We have stuff that you haven’t even seen or heard about. We have stuff that Putin and Xi have never heard about before. There’s nobody — what we have is incredible.” “Woodward said other unnamed sources confirmed the program’s existence, though details on it are not included.”

“His attention span is like a minus number.” — Dr. Anthony Fauci, quoted by Bob Woodward in Rage about President Trump in meetings, according to the Washington Post.

Former director of national intelligence Dan Coats could not shake his “deep suspicions” that Russian President Vladimir Putin “had something” on President Trump, seeing “no other explanation” for the president’s behavior, according to Bob Woodward’s new book Rage, which was obtained by CNN.

Coats and his staff examined the intelligence regarding Trump’s ties to Russia “as carefully as possible” and that he “still questions the relationship” between Trump and Putin despite the apparent absence of intelligence proof.

The House Intelligence Committee received a whistleblower complaint from a former senior Department of Homeland Security official who alleges he was instructed to “cease providing intelligence assessments on the threat of Russian interference in the United States” because it “made the president look bad,” the Washington Post reports.

New York Times: “Brian Murphy, the former head of the intelligence branch of the Homeland Security Department, said in a whistle-blower complaint filed on Tuesday that he was directed by Chad Wolf, the acting secretary of the department, to stop producing assessments on Russian interference.”

“Dr. Francis Collins, the director of the National Institutes of Health, took issue on Wednesday with President Trump’s suggestion that a coronavirus vaccine would be available by Election Day,” the New York Times reports.

Said Collins: “Certainly, to try to predict whether it happens on a particular week before or after a particular date in early November is well beyond anything that any scientist right now could tell you and be confident they know what they are saying.”

“A Trump administration appointee at the Department of Health and Human Services is trying to prevent Anthony Fauci, the government’s top infectious disease expert, from speaking about the risks that coronavirus poses to children,” Politico reports.

Sen. Josh Hawley (R-MO), who was also added to the list, tweeted that he had no interest in being a Supreme Court justice.

Rep. Andy Biggs (R-AZ) “is neither a physician nor a scientist but he continues to attack public health advice and scientific evidence on COVID-19,” the Arizona Republic reports.

“In his latest tweets, Biggs urges Arizonans to flout national and local public health guidance on COVID-19… He’s also been urging members of the public to ‘unmask.’”

“In front of thousands of worshipers packed shoulder-to-shoulder outside the Capitol, California Senate Minority Leader Shannon Grove (R) grabbed the microphone on Sunday and promised the huge church event would have a real impact,” the Washington Post reports.

“But state leaders are warning the event’s impact could actually be a mass coronavirus outbreak. Although Grove’s permit allowed 1,000 people and required social distancing, the California Highway Patrol said three times as many showed up; videos showed virtually no social distancing or masks in the crowd.”

“Grove has come under added fire because she was supposed to be quarantining after coming into close contact with state Sen. Brian Jones (R), who tested positive on Aug. 26 for covid-19. Instead, she took the stage on Sunday and spoke at length to the crowd — while failing to wear a mask.”

“Maybe I wouldn’t have put myself in that situation, who knows? We all do stupid things at 17.” — Donald Trump Jr, in an interview with Extra TV, defending 17-year-old Kyle Rittenhouse’s alleged killing of two protesters in Kenosha, Wisconsin.

Bev Veals, a three-time cancer survivor, became so frustrated with a staffer in Sen. Thom Tillis’s office that she began taping their phone call, WRAL reports.

VEALS: You’re saying that, if you can’t afford it, you don’t get to have it, and that includes health care?

STAFFER: Yeah, just like if I want to go to the store and buy a new dress shirt. If I can’t afford that dress shirt, I don’t get to get it.

VEALS: But health care is something that people need, especially if they have cancer.

STAFFER: Well, you got to find a way to get it.

Zucker said that he wanted President Trump “to do a weekly show” and even offered advice ahead of a GOP primary debate on the network.

However, Zucker didn’t want to formally make the offer in email: “I’m very conscious of not putting too much in email, as you’re a lawyer, as you understand. And, you know, as fond as I am of the boss, he also has a tendency… If I call him or I email him, he then is capable of going out at his next rally and saying that we just talked and I can’t have that, if you know what I’m saying.”

He added: “I have all these proposals for him. I want to do a weekly show with him and all this stuff.”

The Trump Plaza in Atlantic City, which opened in 1984 and closed in 2014 after years of financial struggle including a narrowly averted bankruptcy, will be “imploded” on January 29, 2021 a little more than a week after the presidential inauguration, Jersey Digs reports.

A North Carolina county GOP chairman asked that President Trump wear a mask during his campaign stop in the state yesterday, the Winston-Salem Journal reports.

Washington Post: “But when the president emerged Tuesday evening to address a cheering group of supporters, his face was fully exposed, a likely violation of the state’s coronavirus rules.”

“The same was true of many of the supporters behind his podium, especially those high up in the stands and out of view. And in fact, the whole event appears to have defied restrictions from North Carolina Gov. Roy Cooper (D), who has limited outdoor mass gatherings at 50 people under the state’s current phase of reopening.”

“President Trump signed a largely symbolic proclamation Tuesday urging Congress to expand a moratorium on oil and gas drilling off America’s southeastern coastline, touting his controversial environmental record in a state in the crosshairs of climate change and electoral politics,” the Los Angeles Times  reports.

“Since taking office, Trump has shredded dozens of environmental protections, dismissed the scientific consensus on climate change and tapped energy lobbyists to lead the agencies entrusted with safeguarding the country’s natural resources, but he dramatically recast his record in an effort to woo environmentally minded voters.”

Said Trump: “Number one since Teddy Roosevelt. Who would have thought? Trump is the great environmentalist.”

The U.S. Justice Department is seeking to take over the defense of President Trump in a defamation suit brought by advice columnist E. Jean Carroll, who claims Trump raped her two decades ago, Bloomberg reports.

In a court filing Tuesday, the Justice Department said Trump was acting “within the scope” of his job as president when he said Carroll lied about the incident, prompting her lawsuit.