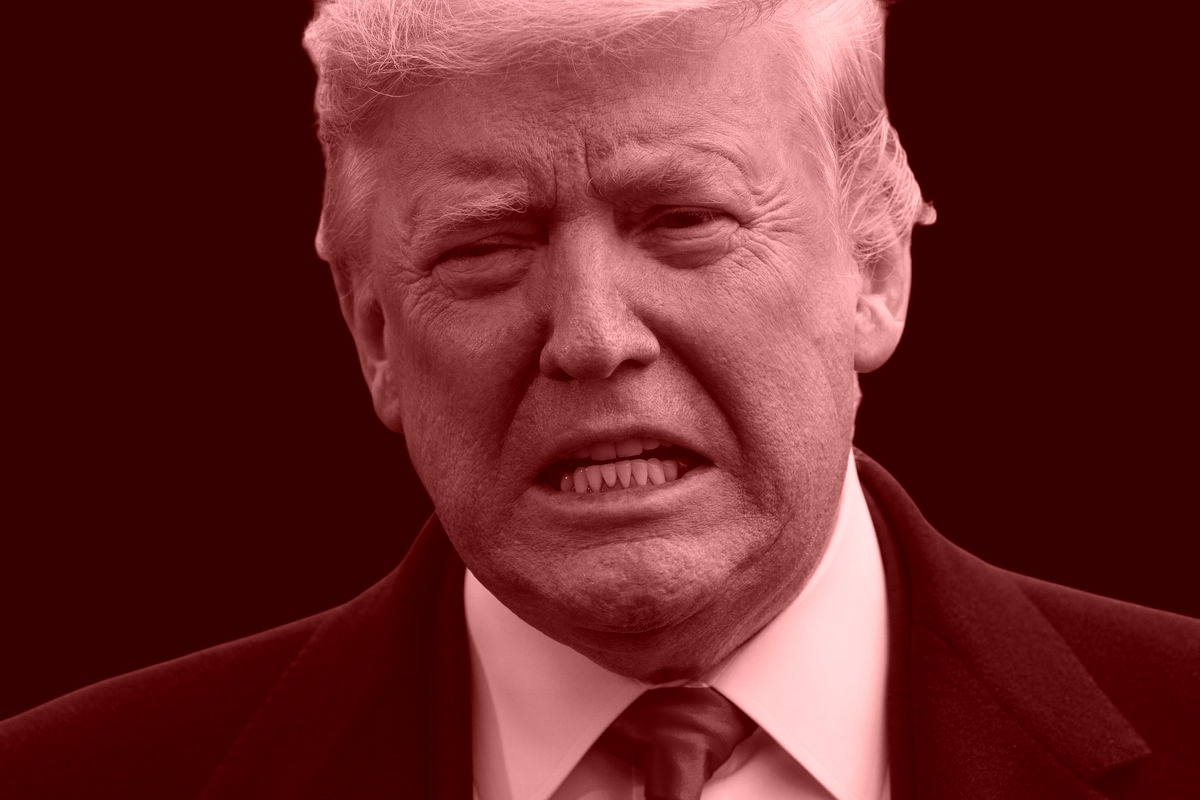 Said Meadows: “That comment was more directed about the military industrial complex.” Uh, about that….

Although McConville declined to directly address Trump’s remarks during a virtual event hosted by Defense One on Tuesday, the Army’s top general defended Pentagon officials against the President’s assertion. […] “So I can assure the American people that senior leaders would only recommend sending troops to combat when it’s required in national security, or as a last resort,” McConville said. “I feel very strong about it.” McConville argued that despite the “political environment” nowadays, the military needs to remain an “apolitical organization,” especially in light of the November presidential election.”

President Trump launched a tweet storm raging that the Atlantic story that he disparaged the military was “planted” by Joe Biden’s campaign. He also blasted Michael Cohen, who has a new book out this week. He claimed the election would be rigged. He has also again launched a tirade against Black Lives Matter “anarchists.” And he claimed the “real polls” are starting to look great for him.

“The Senate returns from its August recess Tuesday with no signs of progress on a new coronavirus relief package — and only days to reach a deal before lawmakers head back home to campaign,” Politico reports.

“Despite weeks of high-level talks between the White House and Democratic congressional leaders, a bipartisan compromise is increasingly unlikely before the election even as millions of Americans remain unemployed and the coronavirus’ death toll continues to rise.”

“Senate Majority Leader Mitch McConnell announced Tuesday he might try to force his chamber to cast a test vote this week on a new version of his party’s economic recovery plan, putting pressure on Republicans to get behind a measure meant to serve as an election-year contrast with Democrats,” CNN reports.

Bloomberg: “The bill, expected to feature some of the aspects of a $1 trillion proposal put forth by Republicans a month ago, is expected to cost $500 billion to $700 billion.”

Playbook: “The government is slated to shut down in 22 days, and color us skeptical of all the ‘we-decided-not-to-shut-it-down’ talk from Speaker Nancy Pelosi and Treasury Secretary Steven Mnuchin. Does anyone actually actively plan to shut down the government? If the two sides don’t get an agreement, are we to believe that after all of the back and forth and calls for a Covid relief deal, Democrats are just gonna fold and agree to a clean government funding bill? And Republicans are going to give up on their priorities, too? Just weeks before an election? We’re not predicting a shutdown. We’re just saying that we don’t think we’ve seen the last frame of this movie yet — nor do many in the Capitol and White House.”

“As of right now, Senate Republicans are working behind the scenes to see if they can get 51 votes for a “skinny” Covid bill that they hope to release this week. That bill will include an extension of the PPP, more enhanced unemployment and money for schools and day care. The inability to get 51 GOP votes would be a big defeat for the White House and Senate GOP leadership. At this moment, the leadership is trying to find a sweet spot in policy that would get them 51 votes — and there’s no guarantee that will happen.”

“The Trump administration said Thursday it would allow new offshore oil and gas drilling in nearly all United States coastal waters, giving energy companies access to leases off California for the first time in decades and opening more than a billion acres in the Arctic and along the Eastern Seaboard,” the New York Times reports.

“The proposal lifts a ban on such drilling imposed by President Barack Obama near the end of his term and would deal a serious blow to his environmental legacy.”

And then once that report was out, Trump panicked and reversed himself on a limited basis, announcing a 10-year ban on oil drilling off the coasts of Florida, Georgia and South Carolina — in a political reversal likely meant to help shore up his support in swing states, Politico reports.

Said one energy industry official: “It’s a complete ambush. Nobody knows where this came from. It totally seems like a campaign sort of thing.”

“House Democrats are launching an investigation of Postmaster General Louis DeJoy and called for his immediate suspension following accusations that he reimbursed employees for campaign contributions they made to his preferred GOP politicians, an arrangement that would be unlawful,” the Washington Post reports.

“Rep. Carolyn B. Maloney (D-N.Y.) said in a statement late Monday that the House Committee on Oversight and Reform, which she chairs, would begin an investigation, saying that DeJoy may have lied to her committee under oath. Maloney also urged the Board of Governors of the U.S. Postal Service to immediately suspend DeJoy, whom ‘they never should have hired in the first place,’ she said. A spokesman for the Postal Service did not immediately respond to a request for comment.”

New York Times: “President Trump is using a fear-based playbook that is as familiar to him as it is questionable in actually helping Republicans get elected in recent years. Some of the players have changed — instead of MS-13 gang members and migrant caravans, now there are rioters and looters — but the target audience and themes are the same: Suburban communities that he claims Democrats won’t keep safe. The president is even reusing phrases and imagery from 2018, with slogans like ‘jobs not mobs’ and ads showing Democratic politicians and liberal figures kneeling during the national anthem.”

“Democrats can point to the 41 House seats they picked up in 2018 to show that the Republican strategy did not work then, and that voters were more concerned about health care than havoc. Even Republicans say there is no solid evidence in their polling that proves the president’s tactics are helping him today.”

“A large, Phase 3 study testing a Covid-19 vaccine being developed by AstraZeneca and the University of Oxford at dozens of sites across the U.S. has been put on hold due to a suspected serious adverse reaction in a participant in the United Kingdom,” Stat reports.

“The nature of the adverse reaction and when it happened was not immediately known, though the participant is expected to recover.”

“As the presidential campaign entered the post-Labor Day sprint to the finish line, President Trump returned to a familiar theme this week: minimizing the threat posed by the coronavirus, sometimes in ways that contradict the advice of federal health authorities,” the New York Times reports.

“Mr. Trump took to Twitter on Tuesday morning to insist that ‘New York City must stop the Shutdown now‘ and then to claim that virus restrictions in other states were ‘only being done to hurt the economy prior to the most important election, perhaps, in our history.’”

The video was never formally used but made its way online.

“In the video, Trump didn’t mention the nearly 13,000 people who died in the H1N1 pandemic under Obama. Given how his other criticisms held up, that’s probably for the best.”

Michael Cohen writes in his new tell-all book that Donald Trump praised Russian President Vladimir Putin during the 2016 presidential campaign because he assumed he would lose the election and wanted to make sure he could borrow money from Russian sources for his real estate empire, NBC News reports.

Also interesting: “When a Russian oligarch bought Trump’s mansion in Palm Beach, Florida, in 2008 for nearly double what Trump paid for it — a $50 million profit — Trump believed Putin was secretly funding the deal.”

Adam Serwer notes that for the first time, America may have an anti-racist majority.

“Trump was elected president on a promise to restore an idealized past in which America’s traditional aristocracy of race was unquestioned. But rather than restore that aristocracy, four years of catastrophe have—at least for the moment—discredited it. Instead of ushering in a golden age of prosperity and a return to the cultural conservatism of the 1950s, Trump’s presidency has radicalized millions of white Americans who were previously inclined to dismiss systemic racism as a myth, the racial wealth gap as a product of Black cultural pathology, and discriminatory policing as a matter of a few bad apples.”

“Those staples of the American racial discourse became hard to sustain this year, as the country was enveloped by overlapping national crises.”

Michael Cohen was asked in a NBC News interview whether he was a witness to any moments where President Trump was exhibiting racism or used a racial slur.

Said Cohen: “Unfortunately all too many times.  We had one where right after Nelson Mandela had passed away — and I talk about this in the book —  he asked me if I had known of any country that’s run by a Black that’s not a shithole. And I said, ‘Well, how about America?’ To which he gave me the proverbial F-you.”

“I describe Mr. Trump as a cult leader, and I was in this cult. While I was in the cult, I was really refusing to acknowledge that the actions I was performing for my boss were morally wrong,” — Michael Cohen, in an interview with NBC News.

“As the world battles the coronavirus pandemic, more and more protective equipment is ending up in the sea. Globally we are using 129 billion face masks and 65 billion plastic gloves every month,” the BBC reports.

Green That Life: 25 eco-friendly resusable face masks that you and the planet will love.

President Trump’s net worth fell by an estimated $600 million in the past year, Forbes reports.

“New Jersey endows its governors with the most executive power in the nation. Chris Christie knew it and used that broad authority to become a hero of the Republican Party — a state-level strongman who forced Democrats to do his will or face his wrath,” Politico reports.

“Few thought Phil Murphy, his Democratic successor, would consolidate that power even further. Murphy struggled early on to move his progressive agenda through the solidly Democratic Legislature. Rival factions formed to oppose him. His signature proposal — a new tax on millionaires — was rejected twice.”

“Now, six months into a global pandemic that’s shattered the state’s economy and killed roughly 16,000 residents, Murphy has become one of the most popular governors in New Jersey history — and discovered just how much say he has over the state and its government.”