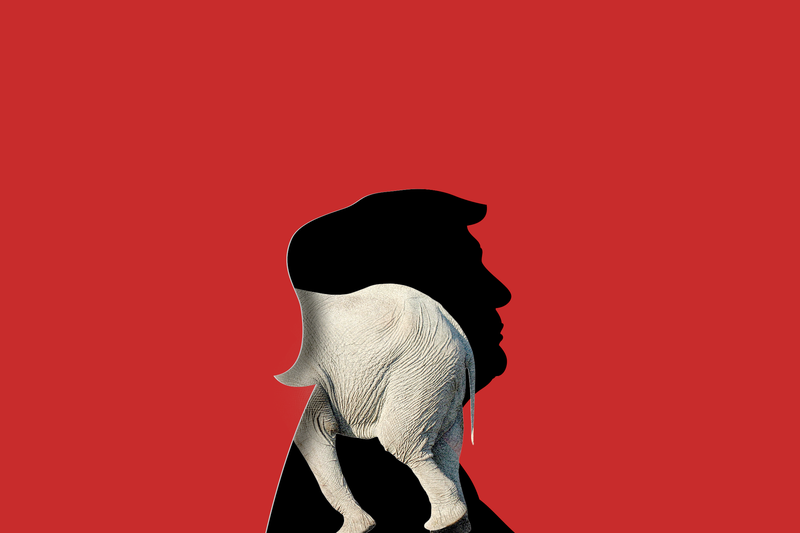 Joe Biden lit into President Trump for his reported comments denigrating U.S. war dead as “losers” and “suckers,” Bloomberg reports. Said Biden: “It’s disgusting, and it affirms what most of us believe to be true: that Donald Trump is not fit to do the job of president, to be the commander in chief.”

He added: “President Trump has demonstrated he has no sense of service, no loyalty to any cause other than himself.”

President Trump denied in series of tweets that he had called fallen soldiers “losers” and “suckers,” as was reported in a blockbuster article in The Atlantic earlier in the evening.

The Associated Press, however, has multiple sources who confirmed the president’s disparaging remarks. The Washington Post also confirms the stunning report from The Atlantic that President Trump referred to fallen U.S. troops as “losers” and “suckers.”

A former senior administration official said “that the president frequently made disparaging comments about veterans and soldiers missing in action, referring to them at times as ‘losers.’”

“In one account, the president told senior advisers that he didn’t understand why the U.S. government placed such value on finding soldiers missing in action because they had performed poorly and gotten caught and deserved what they got.”

Even freaking Fox News has two former senior Trump administration officials confirming the story. According to one former senior Trump administration official: “When the President spoke about the Vietnam War, he said, ‘It was a stupid war. Anyone who went was a sucker’.” He added: “What’s in it for them? They don’t make any money.” Explained the source: “It was a character flaw of the President. He could not understand why someone would die for their country, not worth it.”

First Read: “When you read The Atlantic article, there’s one person who can help settle this he-said-vs.-he-said debate: former White House chief of staff John Kelly.”

Blake Hounshell: “Have never seen the Trump White House mobilize to deny a story faster and more vigorously than this Atlantic article.”

First Read: “Had you told us, at the beginning of the week, that Joe Biden would travel to Kenosha, Wisconsin, and that the coronavirus would remain a backburner issue on the campaign trail, we would have concluded that this would have been a good week for President Trump.”

“Instead, it’s been a brutal one for Trump – now 60 days out until the election.”

Moncef Slaoui, the chief adviser for the White House vaccine program, told NPR that it was “extremely unlikely but not impossible” that a vaccine for the coronavirus could be available by the end of October.

He added: “I firmly believe that we will have a vaccine available before the end of the year and it will be available in quantities that can immunize patients, subjects at the highest risk.”

Russia’s “Sputnik-V” coronavirus vaccine produced an antibody response in all participants in early-stage trials, according to results published on Friday by The Lancet medical journal, Reuters reports.

President Trump “has cranked up pressure on administration health officials to expedite work both on a coronavirus vaccine and on treatments that might signal to voters there is an end in sight to the life-altering pandemic that has imperiled his reelection prospects,” CNN reports.

Said Massie: “He also exhibited incredible restraint and presence and situational awareness. He didn’t empty a magazine into a crowd.”

“I don’t think that Trump, when he meets with Putin, receives a task list for the next quarter. But I do think the president is compromised, that he is unable to put the interests of our nation first, that he acts from hidden motives, because there is leverage over him, held specifically by the Russians but potentially others as well.” — Peter Strzok, in an interview with The Atlantic, on his new book, Compromised: Counterintelligence and the Threat of Donald J. Trump.

Anne Applebaum: “As I read Strzok’s book, I found myself unexpectedly angry, because his narrative exposes an extraordinary failure: Despite multiple investigations by the FBI, Congress, and Mueller’s team, Americans have still never learned the full story about the Trump campaign’s relationship with Russia or Trump’s own decades-long financial ties with Russia. Four years have passed since the investigation began. Many people have been convicted of crimes. Nevertheless, portions of reports produced by Mueller, the Senate Select Committee on Intelligence, and others remain redacted. Investigations are allegedly ongoing. Details remain secret. Meanwhile, valuable FBI time and money were spent investigating which email server Hillary Clinton used—a question that, as it turned out, had no implications for U.S. security whatsoever.”

Former national security advisor John Bolton told CNBC that President Trump’s “failure to think strategically worsened the impact of the coronavirus in the United States, and warned that his former boss’s decisions could actually get worse if the president is re-elected this fall.”

Said Bolton: “I’m actually worried that the second term might be worse than the first term. In many cases, the president came to decisions in the national security space that I agreed with. But he did it not because of the merits of the argument in favor of a particular policy, but because of the fear of the political blowback he would get domestically if he went in a different direction.”

He added that if Trump is re-elected, “that political guardrail is, if it’s not eliminated entirely, it’s certainly minimized.”

BuzzFeed News: “The editors at BuzzFeed News have become uneasy about using conspiracy theory to describe QAnon, which has grown to encompass a whole alternative world of beliefs and signals. The copydesk has to stay on top of language and note when terms become stale and reductive; QAnon has shifted, and so should how we write about it.”

“QAnon is a collective delusion, and that’s what BuzzFeed News will be calling it from now on.”

Andrew Sullivan: “Every hoary stereotype leveled against the right for decades has been given credence by the GOP’s support for this monster of a human being. If moderates have any chance of defanging the snake of wokeness, and its attempt to deconstruct our Enlightenment inheritance, we must begin with removing the cancer of Trump from the body politic. It is not an ordinary cancer. It is metastasizing across the republic and spreading to the lifeblood of our democracy itself. Removing it will not be enough. But not removing it is democratic death…”

“The only way out of this spiral is an unlikely figure, Joe Biden. An old-school moderate representing a party fast moving leftward, he is, quite simply, the least worst we’ve got. I’m worried the far left will eat his lunch in office, but that is a less pressing worry than the potential destabilization of the entire system if Trump wins in November. The potential for spiraling unrest in a Trump second term could prompt the dictatorial nightmare many of us have been worried about for years.”

USA Today: “In a heretofore unpublicized memo, the Pentagon delivered an order to shutter the Stars and Stripes, a newspaper that has been a lifeline and a voice for American troops since the Civil War.”

“The memo orders the publisher of the news organization (which now publishes online as well as in print) to present a plan that ‘dissolves the Stars and Stripes by Sept. 15 including ‘specific timeline for vacating government owned/leased space worldwide.’”

President Trump reversed a decision to cut funding to Stars and Stripes, a newspaper that has served American soldiers since the Civil War, USA Today reports.

Susan Glasser: “The rest of the news in Trump’s America, two months before Election Day, is equally gutting: twenty or so U.S. states have rising cases of COVID-19, and, as many schools and universities reopen, the numbers are expected to grow. On many days, more than a thousand Americans die as a result of the pandemic. By comparison, in the worst week of the Vietnam War, just more than five hundred American personnel died… All told, American deaths from COVID-19 are approaching two hundred thousand.”

“Mass unemployment continues, and many companies are bracing for new, more permanent layoffs. Food banks are overwhelmed. Congress, stuck in an impasse between House Democrats and Senate Republicans, has failed to pass a new round of economic relief, and the initial aid package for small businesses and the unemployed has run out. The national debt as a share of the economy has reached its highest level since the Second World War.”

“None of this, apparently, has any electoral consequence. In fact, looking at the polls, you would be hard-pressed to discern that anything of consequence is happening at all.”

I disagree. Biden is up by 10 in nearly all the polls, leading in 9 out of 10 battlegrounds. That’s an electoral consequence. Incumbent Presidents rarely lose when running for reelection. In the last 100 years, a President running for reelection has been defeated only three times (1932, 1980, 1992) out of sixteen attempts.

“U.S. employers added 1.4 million jobs in August and the unemployment rate fell to 8.4%, as the economy settled in for a slow recovery from the pandemic,” the Wall Street Journal reports.

“A fight over Education Secretary Betsy DeVos’s plan to subsidize private school tuition is threatening to derail a Senate GOP effort to write a slimmed-down coronavirus relief bill, people involved in the talks said this week,” the Washington Post reports.

“The $5 billion tax credit proposal has long been championed by DeVos, and President Trump has offered his support for school choice as part of his reelection campaign. Now the measure is being pushed behind the scenes by Sen. Ted Cruz (R-TX) who wants the proposal included in an emerging Senate GOP bill that aims to address economic fallout from the coronavirus.”

Pew Research: “The coronavirus outbreak has pushed millions of Americans, especially young adults, to move in with family members. The share of 18- to 29-year-olds living with their parents has become a majority since U.S. coronavirus cases began spreading early this year, surpassing the previous peak during the Great Depression era.”

Stephen Collinson: “There have been many weeks when the Trump train has looked like it’s going to jump the tracks. But in the seven days since the Republican convention, the President has come perhaps as close as he ever has to a full derailment.”

“The outrages, conspiracy theories and drama have come so fast that it’s almost impossible to believe Donald Trump can keep this up for another eight weeks until Election Day. But as Democratic nominee Joe Biden begins to travel and to offer an alternative vision of sober presidential-style leadership, events of the last few days have clarified the personality clash and issues that will decide the race.”