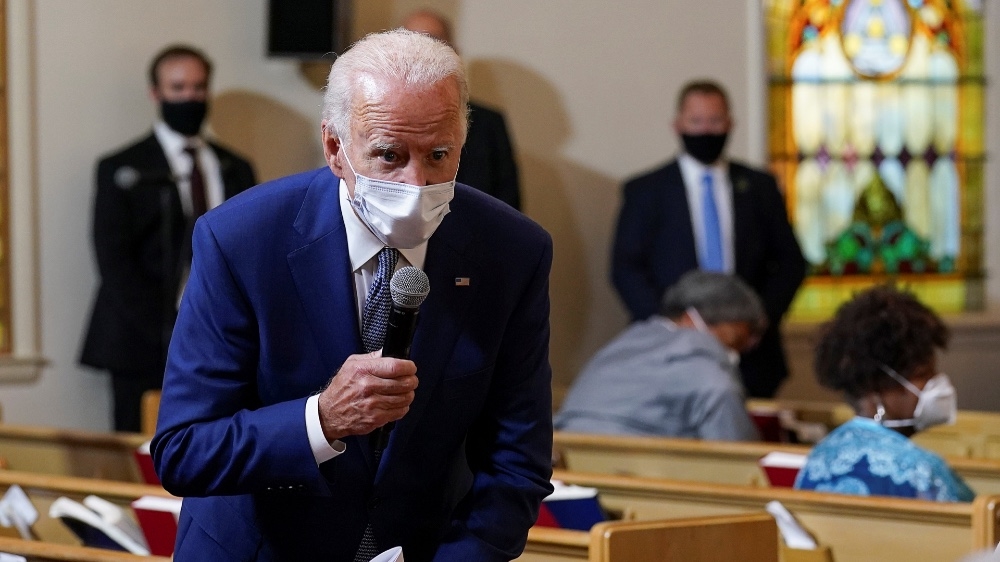 Former Vice President Joe Biden visited Kenosha, Wisconsin on Thursday afternoon in the wake of the police shooting of Jacob Blake and the protests and unrest that followed. Biden met with members of Blake’s family and their attorneys for about an hour and spoke with Blake himself before holding a community meeting in a Kenosha church.

At that meeting, Biden listened to community members including a firefighter, a small business owner whose shop had been damaged and looted, and a local attorney. In his own remarks, Biden said of his past optimism that the United States had progressed toward racial justice, “I made a mistake about something. I thought you could defeat hate. Hate only hides. And when someone in authority breathes oxygen under that rock, it legitimizes those folks to come on out from under the rocks.”

Biden pledged, if elected, to create a White House commission on policing. “I’ll bring everyone to the table,” he said. “Including police chiefs, including civil rights activists, including NAACP, including the Latino community. We’re going to sit down there, and we’re going to work it out.”

Talking Points Memo: “Biden went on to argue that Trump’s remarks exposed the “underlying racism that is institutionalized” in the United States and has existed for 400 years, which he said is what led up to circumstances of police brutality like Blake and the city of Kenosha are facing.”

“A Black man who had run naked through the streets of a western New York city died of asphyxiation after a group of police officers put a hood over his head, then pressed his face into the pavement for two minutes, according to video and records released by the man’s family,” the Associated Press reports.

It turns out that President Trump’s urging of his supporters in North Carolina to vote twice — once by absentee ballot and once in person — is actually a Class I felony in the state. This law reads: “For any person with intent to commit a fraud to register or vote at more than one precinct or more than one time, or to induce another to do so, in the same primary or election, or to vote illegally at any primary or election.”

Rick Hasen: “I don’t expect Trump to be prosecuted for this statement but it is a terrible thing to encourage voter fraud — especially by someone who consistently makes claims that it is rampant in the U.S. (it’s not).”

In yet another sign of how remarkable this election is: North Carolina’s board of elections sent out a reminder that it is a felony to cast two ballots, a day after President Trump encouraged his supporters to vote by mail and in person.

“If you told a Republican to vote twice, they’d get sick at even the thought of it.” — President Trump, in May.

“If you get the unsolicited ballots… send it in early, and then go and vote.” — Trump, to his supporters yesterday.

New York Times: “For decades, President Trump has sown distrust in almost everything he touches. From Native Americans and business competition in New York to President Barack Obama’s birthplace to America’s intelligence agencies to the special counsel investigation he calls the ‘Russia hoax,’ Mr. Trump’s goal has been to undermine the opposition, rely on conspiracy theories to discount any evidence that might discredit him — and, above all, leave people uncertain about what to believe.”

“In the last week alone, Mr. Trump has reposted messages asserting that the real death toll from the coronavirus was only around 9,000 and not 185,000, talked cryptically about a planeload of ‘thugs’ in black uniforms flying to Washington to disrupt the Republican National Convention and asserted without a shred of evidence that his Democratic opponent, Joe Biden, was ‘on some kind of an enhancement’ drug.”

“People who have known the president for years say one of his most sustained assaults, on the integrity of the 2020 election, is straight from his New York tactics.”

The Atlantic: “When President Trump canceled a visit to the Aisne-Marne American Cemetery near Paris in 2018, he blamed rain for the last-minute decision, saying that ‘the helicopter couldn’t fly’ and that the Secret Service wouldn’t drive him there. Neither claim was true.”

“Trump rejected the idea of the visit because he feared his hair would become disheveled in the rain, and because he did not believe it important to honor American war dead, according to four people with firsthand knowledge of the discussion that day.”

“In a conversation with senior staff members on the morning of the scheduled visit, Trump said, ‘Why should I go to that cemetery? It’s filled with losers.’ In a separate conversation on the same trip, Trump referred to the more than 1,800 marines who lost their lives at Belleau Wood as ‘suckers’ for getting killed.”

Garrett Graff: “Even as senior government officials continue to raise alarms about foreign actors seeking to attack the election, the major entities of federal government that share responsibility for election security—the Department of Homeland Security, the Department of Justice, and the Office of the Director of National Intelligence, which oversees and coordinates the nation’s 17 intelligence agencies—have taken steps that appear to undermine or compromise the nation’s ability to conduct a free and free election in November and combat foreign interference.”

Daily Beast: “Those close to Trump aren’t surprised at all by this turn, given how all-consuming his emphasis on defending his honor and lauding his own health has become. For years, his own physical and mental well-being have been extremely touchy subjects for this president, leading to him having various prolonged freakouts in public and behind closed doors.”

“Trump has privately groused to friends, family, and aides that New York Times reporter Maggie Haberman accused him of having Parkinson’s disease this summer, according to two people with direct knowledge of the matter. Those sources say that the president has been stewing about this for nearly three months, and he still hasn’t let it go, bringing it up in the West Wing as recently as last week, one of these sources said.”

“Haberman, however, hasn’t accused Trump of having Parkinson’s.”

“President Trump has directed federal officials to find ways to cut funding to a string of cities controlled by Democrats, citing violence amid protests against systemic racism in policing, a move that threatens billions of dollars for many of the country’s largest urban hubs as the president makes the unrest a centerpiece of his re-election campaign,” the New York Times reports.

“Mr. Trump laid out the directive in a memo, released Wednesday, to Russell T. Vought, the acting director of the Office of Management and Budget, and Attorney General William Barr. It accuses state and local officials of abdicating their duties.”

“Speaker Nancy Pelosi and Treasury Secretary Steven Mnuchin have agreed to work to avoid a government shutdown right before the election, and not let the stalemate over virus-relief legislation hold up a vital stopgap spending bill,” Bloomberg reports.

“Their informal agreement was made in a Tuesday phone call… While clearing the way for the government to keep running at the Oct. 1 start of the fiscal year, it doesn’t resolve the standoff over a new stimulus or whether some relief measures might be included.”

Politico: “Economic-relief money drying up in August and September will mark a final blow for some firms that had managed to hang on so far with government aid — which now appears unlikely to be renewed for weeks, if ever.”

“Cold weather and flu season could end outdoor dining, halt other indoor activities and contribute to Covid-19 outbreaks at workplaces. And economists expect weak demand and tight credit — especially for smaller businesses — to add to the tens of thousands of firms that have already collapsed amid the Covid-19 pandemic, while restraining entrepreneurs hoping to replace them.”

“Donald Trump and his top aides are conducting near-daily public events without wearing masks, disregarding government guidelines as well as the president’s short-lived effort to encourage Americans to cover their faces out of patriotism,” Bloomberg reports.

“Federal authorities have launched a criminal investigation into pension distributions made to two top executives of the International Association of Fire Fighters while they were still employed by the union,” the Wall Street Journal reports.

The union’s president, Harold Schaitberger, is a longtime confidant of presidential candidate Joe Biden who told union officials in June: “We will have a key to the back door of the White House if Biden wins.”

James Risen looks at the final Senate Intelligence Committee report that was dumped just before the conventions and hasn’t gotten enough media attention.

“When Donald Trump traveled to Moscow in November 1996, looking for real estate development opportunities, he didn’t get a hotel deal in Moscow, but he may have found a new woman, and the Russian government probably knew about it, according to the Senate Intelligence Committee’s remarkable new report on the committee’s three and a half year investigation into Trump and Russia.”

“Trump met the Russian woman through his business connections at a party at a luxury hotel in Moscow, and the two apparently had a brief affair, at a time when Trump was married to his second wife, Marla Maples. The Senate report has redacted the woman’s name and blacked out her face in photos taken of her with Trump at the time and provided to the committee. But the report explains in detail how Russian intelligence operatives keep track of the sexual activities of visiting foreign business executives, and notes that the Moscow-based U.S. businessman who introduced Trump to the woman probably told Russian government officials about it.”

Philip Bump: “When the pandemic was at its high, about three-quarters of new cases were in blue states. Now, about 7-in-10 new cases are in red states.”

“A former high-ranking official within the National Rifle Association is breaking ranks with the powerful gun lobby, publishing a book that accuses its leaders of decades worth of mismanagement and fraud that he says has left the organization in a state of financial and moral disarray,” ABC News reports.

“Joshua Powell, who formerly served as chief of staff to longtime NRA CEO Wayne LaPierre, said the lawsuit filed by New York Attorney General Letitia James seeking to dissolve the NRA for an array of ‘illegal conduct’ merely scratches the surface of a much deeper culture of corruption.”

“A New York judge has ordered lawyers for President Trump’s company and his son, Eric, to court later in September to explain why they should not be subject to subpoenas issued by the state’s attorney general’s office as part of an ongoing civil investigation,” CNBC reports.

“The Justice Department plans to bring an antitrust case against Google as soon as this month, after Attorney General William Barr overruled career lawyers who said they needed more time to build a strong case against one of the world’s wealthiest, most formidable technology companies,” the New York Times reports.

“Justice Department officials told lawyers involved in the antitrust inquiry into Alphabet, the parent company of Google and YouTube, to wrap up their work by the end of September… Most of the 40-odd lawyers who had been working on the investigation opposed the deadline. Some said they would not sign the complaint, and several of them left the case this summer.”