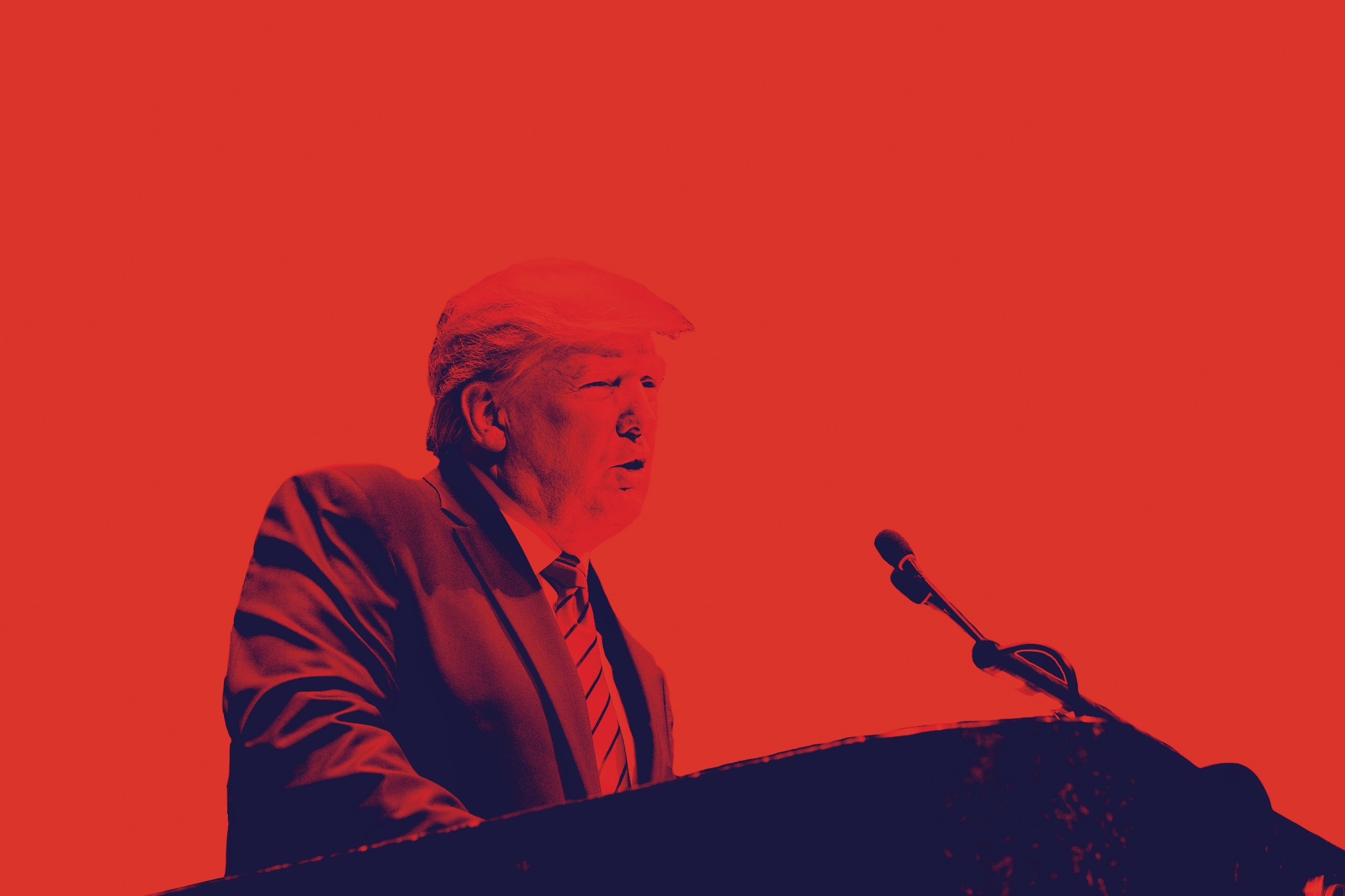 “One nominee has spoken with the family of Jacob Blake, the Kenosha, Wis., man shot in the back by police. The other one hasn’t.”

“One nominee has demanded better policing practices…. The other compared Blake’s shooting to a golfer missing a putt.”

“And one presidential candidate decided to stay away from Kenosha — at least for the time being. The other is headed there today, despite the city’s mayor and state’s governor asking him not to come.”

President Trump denounced Black Lives Matter in a Fox News interview as a “Marxist organization” and said it was “discriminatory.”

Said Trump: “The first time I ever heard of Black Lives Matter, I said, ‘That’s a terrible name.’ It’s so discriminatory. It’s bad for Black people. It’s bad for everybody.”

President Trump told Fox News that the police officer who shot Jacob Blake in the back seven times last month was just having a bad day, like a golfer who misses a simple putt.

Said Trump: “Shooting the guy in the back many times, I mean, couldn’t you have done something different? Couldn’t you have wrestled him? But they choke. Just like in a golf tournament. They miss a three-foot putt.”

USA Today: “Trump, who has expressed off-again, on-again support for mask wearing during the COVID-19 pandemic, was maskless again Tuesday as he surveyed businesses damaged during protests in Kenosha, Wisconsin.”

President Trump doubled-down on his claim of “planes loaded with thugs” set to disrupt various protests in cities.

Said Trump: “A person was on a plane, said there were about 6 people like that person, more or less, and what happened is the entire plane filled up with the looters, the anarchists, rioters, people looking for trouble. The person felt very uncomfortable on the plane.” Trump told reporters he’s going to see if he can put them in touch with the “person” who witnessed it: “Maybe they will speak to you, maybe they won’t.”

“The conspiracy theory that President Trump pushed on Monday that a plane ‘almost completely loaded with thugs’ was set to disrupt protests was almost identical to a rumor that went viral on Facebook three months ago,” NBC News reports.

In an interview with Fox News, Trump claimed that “we had somebody get on a plane from a certain city this weekend, and in the plane it was almost completely loaded with thugs, wearing these dark uniforms, black uniforms, with gear and this and that.”

He then claimed the matter was “under investigation right now.”

There is no evidence of any such flight. When asked for more information about the flight, Trump said, “I’ll tell you sometime.”

“The Trump administration said it will not join a global effort to develop, manufacture and equitably distribute a coronavirus vaccine, in part because the World Health Organization is involved, a decision that could shape the course of the pandemic and the country’s role in health diplomacy,” the Washington Post reports.

“More than 170 countries are in talks to participate in the Covid-19 Vaccines Global Access Facility, which aims to speed vaccine development and secure doses for all countries and distribute them to the most high-risk segment of each population.”

President Trump claimed the “biggest headwind” preventing Big Ten football from happening this fall is “Democrats” — not the coronavirus pandemic.

A federal appeals court blocked the release of President Trump’s tax records to the Manhattan District Attorney while an appeal is heard, the AP reports. Arguments are set for September 25. Trump’s lawyers have already signaled their intention to appeal to the Supreme Court if they lose, further extending a legal fight that began a year ago.

President Trump urged a federal appeals court not to let Manhattan’s top prosecutor get eight years of his tax returns, saying the handover would cause him irreparable harm, Reuters reports.

The argument was made in a filing with the 2nd U.S. Circuit Court of Appeals in Manhattan, which on Tuesday will hear oral arguments on Trump’s bid to delay Manhattan District Attorney Cyrus Vance’s subpoena for the returns during Trump’s appeal.

“Millions of Americans who are struggling to put food on the table may discover a new item in government-funded relief packages of fresh fruits and vegetables, dairy and meat: a letter signed by President Donald Trump,” ProPublica reports.

“The message, printed on White House letterhead in both English and Spanish, touts the administration’s response to the coronavirus.”

“Facebook took down a small network of fake accounts and pages associated with Russian operatives that had recruited U.S. journalists to write articles targeting left-leaning readers on topics such as racial justice, the Biden-Harris campaign, and President Trump’s policies,” the Washington Post reports.

“The network of 13 fake accounts and two pages was in its early stages of attempting to build an audience.”

Vice President Mike Pence was put on standby to temporarily assume the powers of the presidency during President Trump’s unannounced visit to Walter Reed hospital in November 2019, according to a copy of Michael Schmidt’s forthcoming book obtained by CNN.

Schmidt writes that “word went out in the West Wing for the vice president to be on standby to take over the powers of the presidency temporarily if Trump had to undergo a procedure that would have required him to be anesthetized.”

While Pence did not ultimately assume the powers of the presidency the account raises fresh questions about the reason for Trump’s unscheduled visit.

President Trump on Twitter: “It never ends! Now they are trying to say that your favorite President, me, went to Walter Reed Medical Center, having suffered a series of mini-strokes. Never happened to THIS candidate – FAKE NEWS.”

No one has actually reported that Trump had a series of mini-strokes.

Jonathan Chait: “Events are moving quickly, and we do not have perfect information about what all this means. It may add up to less than what it appears at the moment. Many times before, career officials or even political appointees have reeled back Trump’s most corrupt or dangerous orders.”

“It has the appearance of coordinated action — as if Trump has ordered every arm of the government to generate whatever tools can be placed at the disposal of his reelection.”

Dr. Anthony Fauci pushed back against a conspiracy theory questioning the country’s coronavirus death toll on Good Morning America, which President Trump shared in a retweet this weekend.

Said Trump: “I disagree with a lot of what he said. I get along with him, but every once in a while, he’ll come up with one that I say, ‘Where did that come from?’”

He added: “I inherited him. He was here. He was part of this huge piece of machine.”

Acting Homeland Security Secretary Chad Wolf issued a stern warning to Portland Mayor Ted Wheeler in a Monday letter, saying that the federal government “will have no choice but to protect our American citizens” if unrest continues, CNN reports.

“New York City is delaying the start of its school year by 10 days, Mayor Bill de Blasio announced on Tuesday, as part of a deal to avert a teachers’ strike and calm principals and parents anxious about the start of in-person classes,” the New York Times reports.

Wall Street Journal: “It is traditionally a more daunting task for the challenger: Mr. Biden’s team not only has to turn the broad promises the candidate made on the campaign trail into policy, but also has to fill thousands of jobs and organize government agencies.”

“Next January, the transition is likely to take place with the coronavirus pandemic still ongoing—even if a vaccine is approved in record time—and the economic downturn continuing. There is also the possibility that a delay in the election results or the losing side questioning the legitimacy of the outcome could affect the transition.”

As the presidential election fast approaches, the Department of Health and Human Services is bidding out a more than $250 million contract to a communications firm as it seeks to “defeat despair and inspire hope” about the coronavirus pandemic, Politico reports.

The vast majority of the money will be spent from now until January.

Federal prosecutors have seized “voluminous” emails and other communications in their case against Stephen Bannon, the former adviser to President Trump who is charged with defrauding donors to a private group that promised to build a wall on the Mexican border, the New York Times reports.