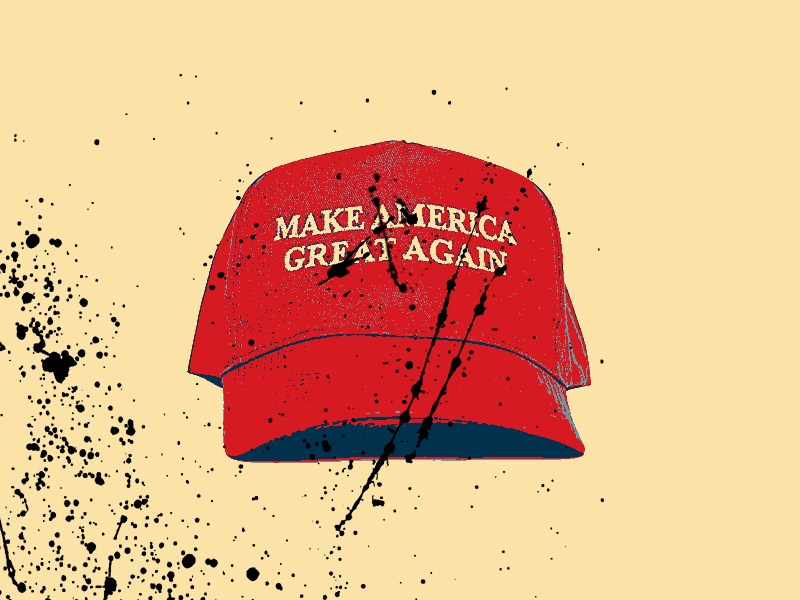 “President Trump unleashed an especially intense barrage of Twitter messages overnight and Sunday morning, embracing fringe conspiracy theories claiming that the coronavirus death toll has been exaggerated and that street protests are actually an organized coup d’état against him,” the New York Times reports.

“In the weekend blast of Twitter messages, Mr. Trump also embraced a call to imprison Gov. Andrew Cuomo of New York, threatened to use force against demonstrators outside the White House, attacked CNN and NPR, embraced a supporter charged with murder, mocked his challenger, former Vice President Joseph R. Biden Jr., and repeatedly assailed the mayor of Portland, even posting the mayor’s office telephone number so that supporters could call demanding his resignation.”

Peter Baker: “Even for Trump, it was a morning of especially wild tweets.”

Axios: Portland Mayor Ted Wheeler reacted to President Trump’s tweets attacking Democratic officials in the wake of a fatal shooting Saturday night during clashes between Trump supporters and protesters: “I’d appreciate that either the president support us or stay the hell out of the way.”

On Friday night, Trump threatened to invoke the Insurrection Act in American cities and told supporters in New Hampshire they must vote for him to “save democracy from the mob,” an escalation of his campaign rhetoric against demonstrators in the streets, the Washington Post reports.

“Trump opened his speech in a suburban airport hangar here with a harsh, fiery depiction of major American cities and a detailed monologue about agitators chasing and taunting his supporters and allies outside the White House following his convention speech Thursday night, describing scenes he had viewed on television in vivid detail.”

Said Trump: “You know what I say about protesters? Protesters, your ass. I don’t talk about my ass. They’re not protesters, those are anarchists, they’re agitators, they’re rioters, they’re looters.”

“President Trump will travel to Kenosha, Wisconsin, on Tuesday to meet with law enforcement and to survey some of the damage from the recent protests,” CNN reports.

“When asked if the President would meet with the family of Jacob Blake, a 29-year-old Black man who was shot by police, White House spokesman Judd Deere said that the schedule hasn’t been fully ironed out yet.”

Jacob Blake’s attorney Benjamin Crump told CBS News that President Trump has not contacted the Blake family ahead of his planned visit to Kenosha, Wisconsin, on Tuesday, more than a week after police shot Blake seven times in the back.

Joe Biden and his running mate Sen. Kamala Harris spoke with the Blake family for over an hour last week.

“A new wave of layoffs is washing over the U.S. as several big companies reassess staffing plans and settle in for a long period of uncertainty,” the Wall Street Journal reports.

An investigation by a UK-based counter-extremist organization found that typing “holocaust” into Facebook search brought up suggestions for denial pages, which in turn recommended links to publishers which sell revisionist and denial literature, as well as pages dedicated to the notorious British Holocaust denier David Irving, The Guardian reports.

Stephanie Winston Wolkoff writes in her new book, Melania and Me, that Melania Trump didn’t want to move to the White House right away in part because she didn’t want to have to use the same shower and toilet as former First Lady Michelle Obama and was waiting for the bathroom to be renovated, Politico reports.

Another reason previously reported was that Melania delayed her move to the White House to gain leverage for renegotiating her prenuptial agreement with her husband.

A supporter of President Trump made a bomb threat against a reporter and it was all caught on camera, Mediaite reports. Said the man: “You mother fuckers are gonna pay, someone is gonna bomb you, might even be tonight.” The man also called the reporter a “fucking liar” and a “pussy” in an unprovoked tirade.

President Trump took a moment to hand out autographed photos of himself to emergency officials following a roundtable discussion of the devastation wrought by Hurricane Laura.

He then advised the officials to put the autographs up for auction online: “Sell this tonight on eBay. You’ll get $10,000. If I put your name down, it loses a lot of value. So sell it tonight on eBay.”

According to Melania and Me, which I just received in the mail, Donald Trump wanted his inauguration to look like a North Korean military parade. Said Trump: ‘I want tanks and choppers. Make it look like North Korea.” Politico has eight other “juicy details” from the book.

Acting DHS secretary Chad Wolf on Sunday denied knowing that the Trump administration’s naturalization ceremony would later air as part of the Republican National Convention amid concerns that the RNC event was one of several incidents that violated the Hatch Act, which prohibits executive government officials from participating in political activity while on duty.

“I participated in several of them not only with the President, but with the Vice President,” Wolf said. “So, it’s absolutely a legitimate role for the department to do.”

“The head of the US Food and Drug Administration has said he is willing to bypass the normal approval process to authorise a Covid-19 vaccine as soon as possible — but has insisted he will not do so to please President Trump,” the Financial Times reports.

“Stephen Hahn said his agency was prepared to authorise a vaccine before Phase Three clinical trials were complete, as long as officials believed the benefits outweighed the risks. But he defended his embattled organisation against accusations that it was rushing the process to boost Mr Trump’s re-election prospects.”

President Trump slammed his niece who recently wrote a critical bookabout the president and released recordings of family members talking about him, with Trump calling her “unstable.”

Said Trump: “Even whether it’s dumb warmongers like John Bolton, social pretenders like Bob Woodward, who never has anything good to say, or an unstable niece, who was now rightfully shunned, scorned and mocked her entire life, and never even liked by her own very kind & caring grandfather!”

“The Justice Department secretly took steps in 2017 to narrow the investigation into Russian election interference and any links to the Trump campaign, keeping investigators from completing an examination of President Trump’s decades-long personal and business ties to Russia,” the New York Times reports.

“The special counsel who finished the investigation, Robert S. Mueller III, secured three dozen indictments and convictions of some top Trump advisers, and he produced a report that outlined Russia’s wide-ranging operations to help get Mr. Trump elected and the president’s efforts to impede the inquiry.”

“But law enforcement officials never fully investigated Mr. Trump’s own relationship with Russia, even though some career F.B.I. counterintelligence investigators thought his ties posed such a national security threat that they took the extraordinary step of opening an inquiry into them. Within days, the former deputy attorney general Rod Rosenstein curtailed the investigation without telling the bureau, all but ensuring it would go nowhere.”

Michelle Obama said that she is “devastated” by the police shooting of Jacob Blake and killing of two protesters this week in Kenosha, Wisconsin.

White House Chief of Staff Mark Meadows argued on NBC News that “most of Donald Trump’s America is peaceful” and that the violence that the Trump campaign has so frequently highlighted as part of its “law and order” message is in “Democrat cities.”

Asked whether Trump is only in charge of the places where he has supporters, Meadows responded: “Well, he does govern and lead the entire country. … These are local law enforcement efforts that can be supported by a federal backstop, whether it be National Guard or the FBI.”

Kevin Roose: “Listen, liberals. If you don’t think Donald Trump can get re-elected in November, you need to spend more time on Facebook.”

“Since the 2016 election, I’ve been obsessively tracking how partisan political content is performing on Facebook… But what sticks out, when you dig in to the data, is just how dominant the Facebook right truly is. Pro-Trump political influencers have spent years building a well-oiled media machine that swarms around every major news story, creating a torrent of viral commentary that reliably drowns out both the mainstream media and the liberal opposition.”

“The result is a kind of parallel media universe that left-of-center Facebook users may never encounter, but that has been stunningly effective in shaping its own version of reality.”