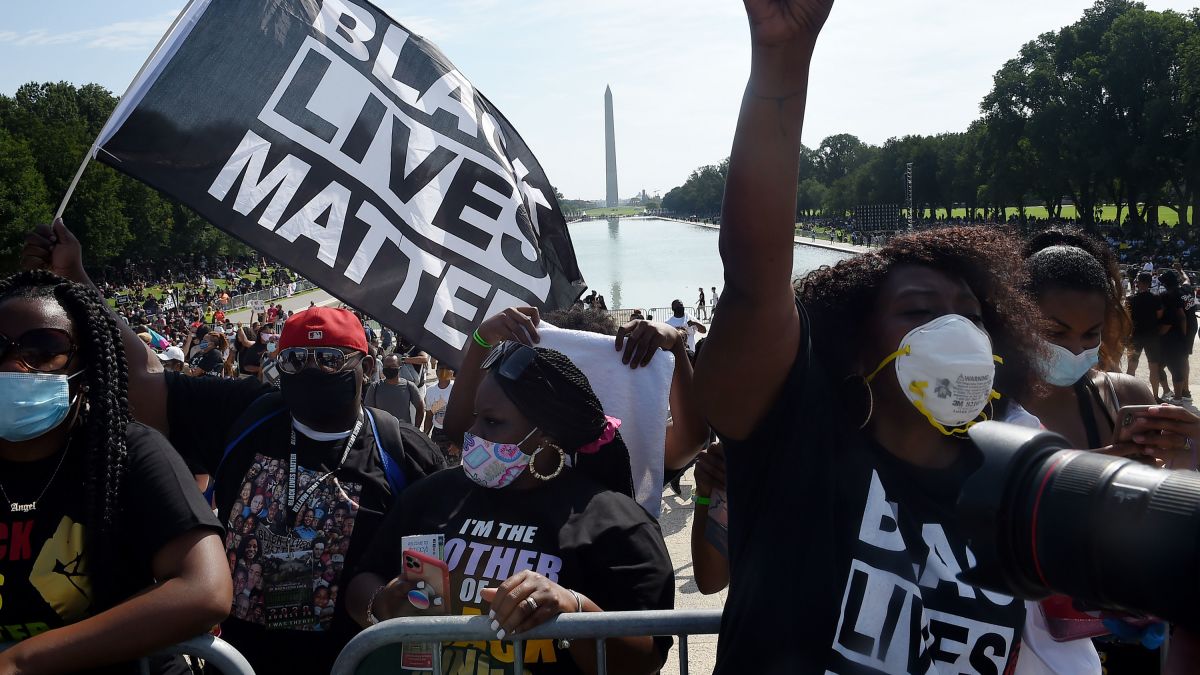 From the New York Times, Wall Street Journal, Washington Post and the USA Today: Thousands of demonstrators marched on Washington on Friday demanding an end to systemic racism while honoring the 57th anniversary of the Rev. Martin Luther King Jr.’s “I Have a Dream” address. Speakers called for the Senate to take up the George Floyd Justice in Policing Act, which would make it easier to prosecute police officers for misconduct, and enact a new version of the 1965 Voting Rights Act. The “Get Your Knee Off Our Necks” Commitment March convened hours after Trump’s acceptance speech on the South Lawn of the White House where he railed against what he called agitators bent on destroying “the American way of life.”

CNN and the New York Times: Jacob Blake, who is now paralyzed from the waist down after a Kenosha police officer shot him seven times in the back, is handcuffed to his hospital bed. Blake was shackled to his bed because of a warrant related to a July charge of third-degree sexual assault, criminal trespass, and disorderly conduct. I hear you can arrest unarmed people with warrants without shooting them seven times in the back.

“He specifically asked the Republican-controlled General Assembly to pass legislation that allows counties to begin processing mail-in ballots sooner and count ones that arrive shortly after Election Day. While 1.5 million people in Pennsylvania voted by mail this June, experts are anticipating that number to surge amid concerns about COVID-19.”

“The Office of the Director of National Intelligence has informed the House and Senate Select Committees on Intelligence that it’ll no longer be briefing on election security issues,” CNN reports.

“The Republican convention this week marked an extraordinary effort to recast President Trump’s image on issues of race and gender, with the party stretching to find African-Americans who would testify that Mr. Trump is not racist, and lining up women to describe him as sensitive and empathetic — qualities he rarely displays in public,” the New York Timesreports.

“This vouching for Mr. Trump, as he was nominated for a second term, was without precedent. Never before has a convention by either major party felt compelled to call such a diverse array of speakers to defend the character of a sitting president.”

“And it was done with a crucial political goal in mind: making a divisive leader appear more palatable to white moderate voters, who have turned against the Trump-led G.O.P. in recent elections, while also trying to peel away some nonwhite voters from Joe Biden.”

Associated Press and CNN: A federal judge ordered the Trump administration and the U.S. Postal Service to turn over documents and information about USPS service changes that could undermine mail-in voting. U.S. District Judge Stanley Bastian gave the administration 10 days to comply with the order, which is tied to a lawsuit brought by 20 states over the changes made by Postmaster General Louis Dejoy. The Justice Department opposed the request, arguing that responding to the requests would be burdensome and that much of the information is already part of the public record. Among the information sought by the states is a list of all mail sorting machines identified for decommissioning, including their locations, and whether they will be reinstalled if they have already been decommissioned.

Reuters and Politico: Trump’s effort to block a subpoena for his financial records would “significantly impair” an ongoing investigation into potential financial crimes, according to the Manhattan district attorney. Cyrus Vance urged the 2nd U.S. Circuit Court of Appeals to reject Trump’s emergency bid to block the subpoena for eight years of his tax returns, saying the “continued delay of the grand jury’s investigation is unwarranted” because Trump has “no chance of success.” Trump has until Monday to respond in writing. Oral arguments are scheduled for Sept. 1.

“The Pentagon is cutting the U.S. force in Iraq to about 3,500 troops, U.S. officials said, a roughly one-third reduction that President Trump is expected to tout as progress toward winding down what he has described as endless wars,” the Wall Street Journal reports.

Mary Trump revealed to MSNBC another set of secretly recorded moments with President Trump’s sister, Maryanne Trump Barry, in which she insults the president and his children.

Said Barry: “Eric’s become the moron publicly. Ivanka gives a fuck. She’s all about her… She’s a mini Donald, but yet he’s besotted with her. He always has been. She’s always been his favorite.”

She added: “And then you get Donald who won’t do anything for anybody unless it’s going to inure to his — I mean, he won’t do any — publicly. I mean, if you — anything he did, he says, ‘Look what I’ve done. Aren’t I wonderful?’ And he’s as tight as a duck’s ass. Just like dad was, really.”

Lynne Patton, a Trump-appointed federal housing official, tricked four public housing residents into appearing in a video that was used for the Republican convention, the New York Times reports.

“Three of the four tenants in the public housing video were interviewed on Friday by The New York Times. All three said they opposed President Trump and were misled about the purpose of the video.”

Washington Post: “In the past two months, dozens of Secret Service agents who worked to ensure the security of the president and Vice President Pence at public events have been sickened or sidelined because they were in direct contact with infected people, who spoke on the condition of anonymity to describe the incidents.”

“Despite that, Trump has continued to hold large gatherings — most dramatically at the White House on Thursday night, when he delivered his acceptance speech at the Republican National Convention before a crowd of 1,500 people seated closely together on the South Lawn, with few masks in sight. The vast majority were not tested for the coronavirus ahead of time.”

Read this piece from @pareene about how the police force in Portsmouth, VA silences political dissent. It's a distillation of what police forces around the country would like to do if we let them. https://t.co/RwBUxpuIrw