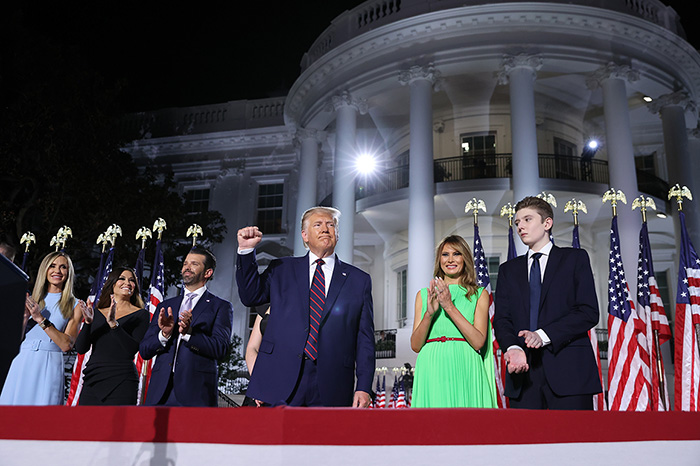 Trump closed out the RNC last night, with a meandering 70-minute long speech that saw him paint a rosy picture of his administration’s handling of COVID-19 and promise a vaccine before the end of the year. Trump also tried to suggest that Biden would usher in chaos, while tending to ignore or misrepresent the chaos that’s happening under his administration.

Politico: “It wasn’t a terribly effective address. The speech lacked structure and thematic discipline. The president swerved between topics, some of which felt beneath the occasion, and appeared so drained by the marathon effort that he failed to punch through what should have been the most impactful moments.”

Washington Post: “A pandemic is raging, preventing Americans from traveling freely, shuttering schools and keeping businesses closed. But not at Trump’s White House. The perfectly manicured lawn was filled with little white chairs that were spaced inches apart and most of the 1,500 or so people in attendance were maskless.”

“Cabinet members, Trump family members, supporters and a beatific Vice President Pence were all nestled up next to one another. It wasn’t so much a cult of denial, but a cult of personality.”

“President Trump accepted the Republican Party’s nomination for a second term on Thursday, joining a general-election contest against Joe Biden that he and his party cast this week as a crusade against left-wing ideology and violent social disorder, fought against the backdrop of a virus that Republicans largely described as a temporary handicap on the economy,” the New York Times reports.

“In a 70-minute speech on the South Lawn of the White House, Mr. Trump repeatedly misrepresented his own record on the coronavirus, part of a broader attempt to minimize his lapses in office and turn a harsh light toward his opponent, Mr. Biden, a moderate Democrat.”

“The president also accused his rival and Democrats of failing to take on rioters, though Mr. Biden has condemned recent acts of violence, and of harboring designs to restructure the American economic system along socialist lines.”

Washington Post: “Trump cast himself as an insurgent rather than the incumbent he is, railing against Biden as eminence of ‘the failed political class.’”

Jennifer Jacobs: That speech felt very long to some people here at the White House. A small number left early.

James Fallows: This was the worst rhetorical performance I have ever seen. The delivery was well matched to the material. Context: I have a professional interest in speeches like this. I’ve written some. I study them. I’ve heard (and can tell you about) acceptance speeches from 1970s onward. But even I am going to turn this off in a minute. It’s the very worst ”main event” speech I can recall.

Michael Brendan Doughtery: He hasn’t had months of arena shows to test material and build anticipation for best lines. After criticizing Biden as vacant, this seems pretty lifeless.

Speechwriter Michael Cohen (not that other Michael Cohen): I wrote a book on campaign speechwriting so I feel that I have some standing to say this is a truly terrible speech. No lift; no coherent message; no interesting turns of phrase. It has all the liveliness and charisma of a State of the Union response. A good acceptance speech is aspirational. It offers a clear contrast. It’s lyrical even poetic. It shows and doesn’t tell. It’s not mind-numbingly long. This speech has none of those qualities.

Jonathan Chait: What’s most striking to me is that the speech is almost pure greatest hits, very little he hasn’t said 100 times. He had a chance to reach a much larger audience. Why not bring something new?

Cameron Joseph: This speech is a turgid, meandering mess. I’ve been at @realDonaldTrump rallies where people are enthralled, and ones like this where half the crowd had meandered out bored before he’s done speaking. This is definitely the latter.

“Joe Biden is considering a modified return to the campaign trail after Labor Day, with short, surgical travel to swing states in the closing two months of the race,” Axios reports.

“As some polls suggest Biden’s lead is narrowing, some Democrats worry that President Trump could gain a tactical advantage at crunch time if he’s campaigning in person and Biden’s only out there virtually.”

“Still, many Biden advisers remain convinced that there’s a strategic benefit to drawing a sharp contrast with Trump when it comes to curbing travel and social distancing — as well as a public health benefit.”

Joe Biden rejected Speaker Nancy Pelosi’s suggestion that he not “legitimize a conversation” with President Trump by debating him, MSNBC reports. Said Biden: “I’m gonna debate him. I’m gonna be a fact-checker on the floor while I’m debating him.”

President Trump told the Washington Examiner that he will call for drug tests for both Joe Biden and himself before the first candidates’ debate on Sept. 29.

“The president expressed suspicion at what he said was a sudden, marked improvement in Biden’s debate performance during the Democratic primary season and suggested that he believes the improvement was the result of drugs. The president offered no evidence to support his speculation.”

Said Trump: “My point is, if you go back and watch some of those numerous debates, he was so bad. He wasn’t even coherent. And against Bernie, he was. And we’re calling for a drug test.”

According to the Washington Post, a new two-minute television ad from the Biden campaign will air on broadcast and cable networks on Thursday night as Trump accepts the GOP’s renomination at the RNC. The ad is part of the Biden campaign’s $26 million ad buy for the week of the RNC.

Amy Walter: “This week I dug into the most recent national poll from Pew Research and compared it with the results of their 2016 validated vote survey (basically, a post-election exit poll that uses official voting records). What you find is that Trump is hitting his 2016 share of the vote among most demographic groups. But, he’s not grown beyond those voters. Instead, it’s Biden who has improved markedly on Clinton’s 2016 performance.”

“Now, the all-important caveat. The voter validated survey is of people who actually voted in 2016, while the July-August survey is of registered voters. In other words, some of the people in the July-August survey may not vote, while everyone in the 2016 survey did. But, it does help give us some perspective on how Trump is performing with key demographic groups compared to how he did with them in 2016.”

Nathan Gonzales: “Confidence in the analysis that Democrats are poised to win in November comes from the depth and breadth of the data. Biden not only leads Trump in the national polls, but in most of the individual battleground states that will decide the Electoral College. And Trump continues to struggle to reach his 2016 performance in key congressional districts around the country.”

“It’s hard to identify any state or district where Trump is performing at least as well as he did four years ago, let alone better. And that’s critical considering 2016, when Trump was just the right candidate at just the right time against just the right opponent winning by just enough in just the right states to win.”

Michigan Secretary of State Jocelyn Benson (D) is warning Detroit voters of a “racially charged” and false robocall that appears to be discouraging mail-in voting ahead of the November election, the Detroit News reports.

The recording tells voters that their personal information will be part of a public database that will then be used by police to track down people with warrants or debt.

ProPublica: “How to vote during a pandemic poses a dilemma for many Americans, who worry about the health risks of voting in person and whether the U.S. Postal Service will be able to deliver mail-in ballots on time. Such concerns are multiplied for nursing home residents.”

“Most, though not all, of the roughly 2.2 million Americans living in nursing homes or assisted living communities are elderly — and thus at higher risk of dying from the coronavirus. They’re also part of the most politically engaged demographic in the country. In 2018, 66% of Americans over 65 voted, compared with just 35% of those 18 to 29. In 2016, Donald Trump had an advantage over Hillary Clinton among voters 65 and older by 53% to 44%, according to the Pew Research Center.”

“Family and friends who helped them vote in prior elections can’t visit them — and may have taken ill or died from COVID-19 themselves. Swing states such as Florida and Wisconsin have suspended efforts to send teams to nursing homes to assist with voting.”

Harry Enten: “We got about about maybe 15% of voters watching this stuff. Most of whom are hardcore partisans in one of the most stable races ever. And little sign the horserace significantly moved after the DNC. This idea that any of the DNC/RNC activities will move voters is untested.”

William Galston: “The president hasn’t done much to expand the narrow base that gave him only 46% of the popular vote in 2016, but this is not necessarily a formula for defeat. As an analysis by Brookings Institution demographer William Frey shows, more than 60% of the 2016 non-voters in the ‘Blue Wall; states of Michigan, Wisconsin and Pennsylvania were whites without college degrees. Compared with 2004, when George W. Bush won re-election, turnout rates among these voters, fell by 7 percentage points in Wisconsin, 5.7 points in Michigan, and 2.7 points in Pennsylvania.”

“Restoring their turnout to 2004 levels could allow President Trump to repeat his 2016 Midwestern success, even if Democrats do better in the suburbs and large cities. He could eke an Electoral College majority even if he loses Florida, where he now trails Mr. Biden.”

“Mr. Trump has other strengths. The sharp economic downturn has reduced but not eliminated the advantage he holds over his challenger on the management of the economy.”

“Kanye West’s presidential campaign continues to push to get him on the ballot in states across the country. But it’s now a full week late with its campaign finance filings, a move that’s allowing the shadowy organization to hide how deep the GOP efforts to back his spoiler campaign go,” Vice News reports.

“The monthly campaign finance filing was due with the Federal Election Commission on August 20. But West’s campaign still hasn’t submitted the paperwork, a requirement for all presidential candidates that planned to raise or spend at least $100,000 on the campaign.”

That represents a significant drop compared to when vice presidential nominee Kamala Harris drew 16.2 million viewers for her speech.

“When President Trump formally accepts the Republican nomination for president on Thursday, he will speak to a live audience at the White House for whom coronavirus tests are not a requirement upon arrival,” Politico reports.

The “guest guidance” document notes that audience members must wear protective face coverings upon their arrival at the White House, and in high traffic areas, but can eschew masks during the president’s speech — when cameras are likely to pan to the crowd gathered on the South Lawn.

ABC News has offered to host a similar town hall with Joe Biden.

John Avlon notes that President Trump will have put three times as many African Americans on stage at the Republican National Convention as he has appointed to his West Wing, Cabinet and US Attorney’s offices… combined.

“It’s a sign that the rhetoric doesn’t remotely match the record.”

Politico: “When Trump launched his reelection campaign last year, he rolled out the “Keep America Great” as its official new slogan with great fanfare. But the Biden campaign recently learned the web domain was available and snagged it.”

“The site now lays out a top-to-bottom rebuke to the Trump administration, including his handling of coronavirus.”

2 comments on “The Campaign Report – The South Yawn”