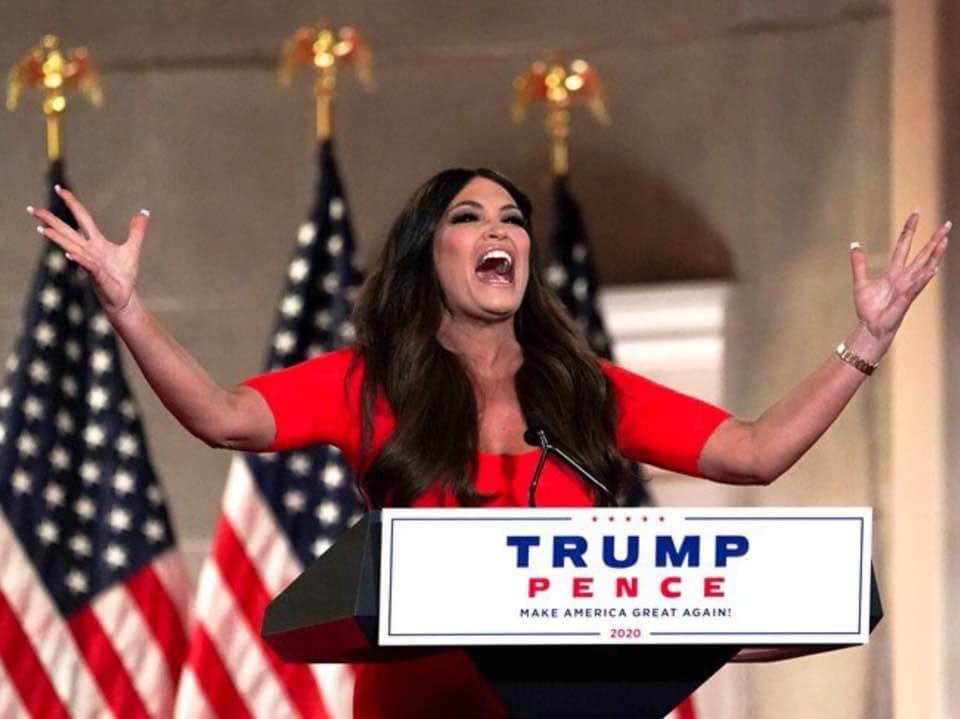 PPP finds that Biden has a 30 point lead in New York: Biden 63%, Trump 32%. LOL, a couple of days ago Trump said NY was in play and his campaign was going to spend money there. Hahahah, please do.

“The fuller ratings picture for the RNC night 1 will become clearer later in the day when the cable news numbers will also be factored in.”

CNN on Melania Trump’s speech tonight: “This speech has also not been vetted by anyone in the West Wing. But Trump has been intricately involved in the writing, editing and delivery of her RNC address, the source said, for which she once again shunned the help of professional speechwriters, relying instead on a senior aide to write the bulk of the content.”

So, it is going to be another copy of an Obama speech then. Or maybe she will copy Jill Biden’s speech from last week.

“The Republican National Convention started off with a parade of dishonesty, in stark contrast with last week’s Democratic convention,” CNN reports.

“While CNN also watched and fact-checked the Democrats, those four nights combined didn’t have the number of misleading and false claims made on the first night of the Republicans’ convention.”

The Los Angeles Times has the most succinct description of the first night of the GOP convention last night: “Welcome to a parallel universe.”

Former Gov. Chris Christie said the Trump campaign cannot run the same way they did in 2016 and he hopes that changes this week.

He added: “I think quite frankly, that the Trump campaign has not done well on either of those fronts. And I’m hoping that’s going to start to change this week, especially on Thursday night.”

The Trump convention did not follow this advice on night one.

“Republicans began their nominating convention Monday with dark denunciations of Democrats and warnings about a future controlled by ‘radical liberals,’ while praising President Trump’s stewardship of the country, including his handling of the coronavirus pandemic that has killed more than 173,000 Americans,” the Washington Post reports.

New York Times: “And they laid out a dystopian picture of what the United States would look like under a Biden administration, warning of a ‘vengeful mob’ that would lay waste to suburban communities and turn quiet neighborhoods into war zones.”

“At times, the speakers and prerecorded videos appeared to be describing an alternate reality: one in which the nation was not nearing 180,000 deaths from the coronavirus; in which Mr. Trump had not consistently ignored serious warnings about the disease; in which the president had not spent much of his term appealing openly to xenophobia and racial animus; and in which someone other than Mr. Trump had presided over an economy that began crumbling in the spring.”

“A group of onetime Republican presidential appointees who served as senior ethics or Justice Department aides are endorsing Joe Biden for president, warning that Donald Trump has ‘weaponized’ the executive branch and is putting in peril the legitimacy of the U.S. Justice Department,” Politico reports.

Said former deputy attorney general Donald Ayer: “I think a lot of us are extremely alarmed, frankly, at the threat of autocracy. He’s going to be unleashed if he gets a second term. I don’t know what’s going to stop him.”

Evan Osnos: “Republicans have long accused Democrats of plotting to smuggle socialism into the United States. But leveling that charge against Biden, whose career has been distinguished mostly by careful centrism, is an awkward task. Biden entered the Democratic primaries with a narrow goal: to end the Trump Presidency. Most Americans, he argued, did not want a revolution. At an early fund-raiser in New York, he promised not to ‘demonize’ the rich and said that ‘nothing would fundamentally change.’”

“But, by the time Biden effectively clinched the nomination, in March, he had begun to describe his candidacy as a bid for systemic change on the scale of Franklin Roosevelt’s New Deal. According to a senior aide to Bernie Sanders, Biden told Sanders, in a phone call about a possible endorsement, ‘I want to be the most progressive President since F.D.R.’ That evolution has confounded critics on all sides.”

“When Rabbi Susan Talve heard that Patricia and Mark McCloskey would be among the speakers addressing the Republican National Convention, she decided she could no longer stay quiet,” The Forward reports.

Said Talve: “It’s so upsetting that they have a national audience.”

“The McCloskeys are Talve’s neighbors. Their property’s northern wall abuts the property of St. Louis’ Jewish Central Reform Congregation, where Talve is the rabbi.”

“In 2013, the synagogue placed beehives along the wall to produce honey for Rosh Hashanah, the Jewish New Year. One morning they found the hives destroyed and all the bees dead. Mark McCloskey had taken an ax or sledgehammer to them.”

“His issue? The fence between them sat six inches inside the McCloskey’s property line. The hives were his to wreck.”

Jonathan Chait: “Conservative intellectuals have spent most of the past four decades claiming — especially during periods of Republican ascent — to be winning the ‘war of ideas.’ Hardly any of them bother to make such a boast now. Now that the Republican convention has given itself over to four straight nights starring Donald Trump — also featuring other unaccomplished members of his family along with some teens who were victimized by social media for wearing Trump gear — and abandoned its platform altogether for the platform equivalent of a MAGA hat, all the fun has been drained out of the exercise.”

“In place of the usual gloating, the right has been engaged in a furious intramural debate over whether to burn down the Republican Party in the wake of Trump’s expected (but hardly assured) defeat. Advocates for burning it down include Max Boot, George Will, Stuart Stevens, Charlie Sykes, Mona Charen, and Jonathan V. Last. Critics include David French,Rich Lowry, and Peggy Noonan. Somewhat in the middle lie Ross Douthat, David Brooks,  Jonah Goldberg, Ramesh Ponnuru, and Kevin D. Williamson.”

Hillary Clinton told Showtime that Joe Biden “should not concede under any circumstances” because she believes the final results in November’s election are “going to drag out” due to mail-in voting.

Said Clinton: “Joe Biden should not concede under any circumstances because I think this is going to drag out, and eventually, I do believe he will win if we don’t give an inch and if we are as focused and relentless as the other side is.”

She added: “I think that Republicans have a couple of scenarios that they are looking toward. One is messing up absentee balloting. They believe that helps them so that they then get maybe a narrow advantage in the Electoral College on Election Day. So we’ve got to have a massive legal operation, and I know the Biden campaign is working on that.”

David Frum: “Republicans have decided not to publish a party platform for 2020. This omission has led some to conclude that the GOP lacks ideas, that it stands for nothing, that it has shriveled to little more than a Trump cult.”

“This conclusion is wrong. The Republican Party of 2020 has lots of ideas. I’m about to list 13 ideas that command almost universal assent within the Trump administration, within the Republican caucuses of the U.S. House and U.S. Senate, among governors and state legislators, on Fox News, and among rank-and-file Republicans.”

“Once you read the list, I think you’ll agree that these are authentic ideas with meaningful policy consequences, and that they are broadly shared. The question is not why Republicans lack a coherent platform; it’s why they’re so reluctant to publish the one on which they’re running.”

Trump campaign manager Bill Stepien spoke on C-SPAN about how he thinks Donald Trump can win the presidential race.

Said Stepien: “We have a quiet confidence based on our pathway…. You want optionality in politics. You want optionality when you look at the map. The president holds true to the states he won in 2016. I’m asked all the time, how are you going to run the table in the Upper Midwest again? He just has to win one of three. He won with 306 electoral votes, not 270, not on the button. We have some cushion there.”

He added: “But I’d also talk about optionality and some near misses, right? He lost by 1,700 votes in New Hampshire, barely lost — by a point and a half — in Minnesota, by 2 points in Nevada, by 3 points in Maine. We were talking about Maine in the previous segment. Mitt Romney lost by 15. So we see optionality when we look at the map. We would see multiple pathways when we look at the map. And that’s what you want when you look at a campaign.”

“When two of the major broadcast networks—CBS and ABC—broke into their regular programming Monday to carry live portions of President Trump’s largely false musings after his official nomination, departing from their announced policy of giving only a hour of daily airtime to each party’s political convention, the Biden-Harris campaign was not amused, the Daily Beast reports.

“Indeed, operatives for Joe Biden and Kamala Harris were fuming Monday about a perceived lack of fairness in which the nation’s major television outlets permitted Trump—in an ominous echo of the 2016 campaign in which the former reality-TV star received an estimated $2 billion of free airtime—to manipulate the media to his advantage.”

Michael Cohen will appear in a series of ads for the Democratic group American Bridge in the coming days, telling voters that Trump “can’t be trusted” and that they “shouldn’t believe a word he utters” during the Republican National Convention this week, CNN reports.

From a 90-second video: “For more than a decade, I was President Trump’s right-hand man, fixer and confidant. I was complicit in helping conceal the real Donald Trump. In essence, I was part of creating an illusion. Later this week, he’s going to stand up at the White House and blatantly lie to you.”

He adds: “I’m here to tell you he can’t be trusted — and you shouldn’t believe a word he utters. So, when you watch the President this week, remember this: If he says something is huge, it’s probably small. If he says something will work, it probably won’t. And if he says he cares about you and your family, he certainly does not.”

The New York Times reviews Hoax by Brian Stelter, which is out today.

“Stelter is at his best when he is explaining the underlying forces that led Fox to embrace propaganda. (Once upon a time, he writes, Fox had a journalistic culture.) Part of the reason is money. Fox News makes nearly $2 billion a year. Its intensely loyal audience allows the channel to charge more for advertising and in fees assessed by cable companies. Inciting viewers is crucial for keeping ratings high.”

“But there is another force at play. Many Fox employees view their job as catering to the president… Stelter traces the Trump-Fox synergies to 2011, when Roger Ailes, the channel’s longtime boss, gave Trump a weekly phone-in slot on the Fox & Friends morning show. The platform provided him a direct line into the brains of millions of Republican primary voters.”

0 comments on “The Campaign Report – All the Screaming”