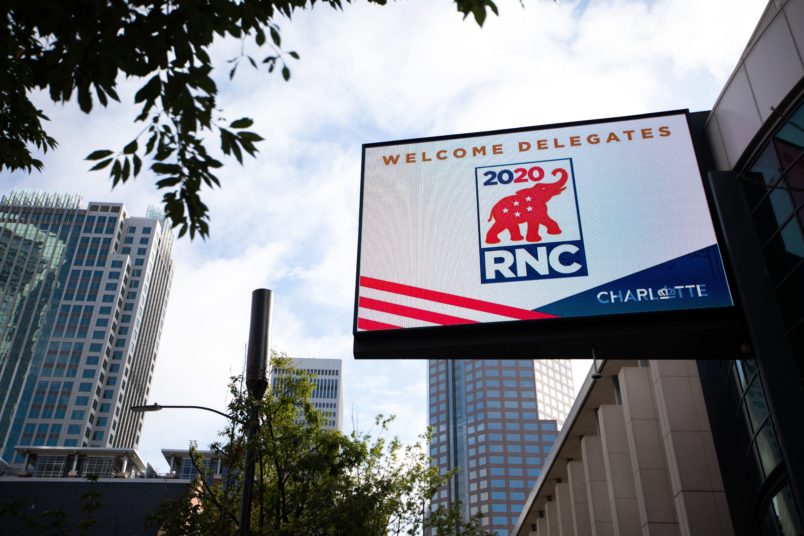 Mary Trump revealed to the Washington Post that she had surreptitiously taped 15 hours of face-to-face conversations with President Trump’s sister, Maryanne Trump Barry, in 2018 and 2019. She gave them to the newspaper.

One exchange was recorded after Barry heard her her brother talk about separating migrant children from their parents at the border.

Said Barry: “All he wants to do is appeal to his base. He has no principles. None. None. And his base, I mean my God, if you were a religious person, you want to help people. Not do this.”

She continued: “His goddamned tweet and lying, oh my God. I’m talking too freely, but you know. The change of stories. The lack of preparation. The lying. Holy shit.”

Trump adviser Jason Miller told NBC News that secret recordings of Maryanne Trump criticizing her brother were just “sibling rivalry” and that “when you get to the White House you have family members who sometimes decide to voice their sibling rivalries or frustrations.”

The New York Times confirms that President Trump plans to speak on all four nights of the Republican convention. Trump will reportedly take the stage at 10 p.m. ET each night.

Two producers of “The Apprentice,” where Trump rose to TV stardom, are involved in the planning of the event.

New York Times: “As Monday’s kickoff looms, Republican officials were still deciding what segments to air live and what would be taped in advance.”

Hahahahaha, what?!?!?! This is going to be a clusterf*ck.

“Typically, convention broadcasts require weeks of highly technical preparation. By the weekend, producers at the major TV networks had only a foggy idea of what to expect, although Republicans provided a more detailed rundown on Saturday evening. Still, broadcasters will head into the week with some unknowns.”

“Republicans involved in the planning admit that anxiety began to set in two weeks ago. But on Saturday, they said that they were now confident that a fully realized lineup was in place — and that in contrast to the Democrats’ virtual event, voters could expect something more akin to a regular convention, with a focus on live onstage moments featuring Mr. Trump, whom aides described as the week’s ‘talent in chief.”

“Republicans will open their national convention Monday with an urgent mission: To convince voters pessimistic about the state of a country battered by the coronavirus pandemic, economic recession and racial upheaval that President Trump deserves another four years at the helm,” the Washington Post reports.

“Convention organizers say the president and his surrogate speakers will showcase optimism and inspire hope in a season of worldwide despair, with programming planned around themes of ‘promise,’ ‘opportunity’ and ‘greatness’ for the country in a second Trump term.”

This is unchanged from last week before the Democratic convention, suggesting he receive no “bounce” from the four day event.

Harry Enten: “There have been only three incumbents who were down by more than a point at the beginning of the convention period since 1940: Harry Truman in 1948, Gerald Ford in 1976 and Jimmy Carter in 1980. Only Truman, down by about 10 points, had a deficit that matched Trump’s at the current time. But even Truman didn’t have an opponent who was already pulling in more than half the vote.”

“The potentially good news for Trump is that because he’s in an unprecedented position, it’s difficult to ascertain his true chance of a comeback, especially during a global pandemic. Further, it’s noteworthy that Truman actually did win in 1948. Ford closed his 7-point deficit pre-conventions against Carter in 1976, but still lost by 2 points.”

“One way in which Trump is clearly in a worse position than either Truman or Ford is his own popularity. Truman’s net approval rating (approve – disapprove) was only about -5 points on the eve of the conventions in 1948. Ford’s was actually positive. Trump’s net approval rating is about -12 points.”

Washington Post: “He is confronting multiple crises at home and has been running a deficit in state and national polls throughout the spring and summer. If the election were held today, Trump probably would become the first one-term president since George H.W. Bush was defeated in 1992.”

“Jared Kushner and White House envoy Avi Berkowitz are expected to travel to the Middle East and visit Israel along with several Gulf states during the first week of September to check on the U.S.-brokered normalization deal between Israel and the United Arab Emirates,”Axiosreports.

“Kushner will also use his talks with leaders in the region to encourage more Arab countries to follow in the UAE’s footsteps and move forward with full normalization of relations with Israel.”

Twitter flagged a tweet by President Trump that claimed, without evidence, that mail drop boxes are a “voter security disaster” and are “not Covid sanitized.”

Attorney General William Barr told Rupert Murdoch to “muzzle” Andrew Napolitano, a prominent Fox News personality who became a critic of President Trump, according to a new book about the rightwing TV network, The Guardian reports.

“Barr’s meeting with Murdoch, at the media mogul’s New York home in October 2019, was widely reported at the time, with speculation surrounding its subject. According to Hoax: Donald Trump, Fox News and the Dangerous Distortion of Truth, by CNN media reporter Brian Stelter, subjects covered included media consolidation and criminal justice reform.”

“But it was also about Judge Andrew Napolitano.”

President Trump accused “the deep state, or whoever” at the Food and Drug Administration of slowing coronavirus vaccine until after the November election to keep him from securing a second term. He offered no evidence for his claim.

Speaker Nancy Pelosi weighed in on the tweet, which she said was “scary” and “beyond the pale,” even for Trump.

President Trump will announce that the FDA will issue an emergency authorization for blood plasma as a coronavirus treatment, Politicoreports.

“The agency held off on the decision last week over concerns from government scientists that evidence for the treatment’s effectiveness is thin — prompting Trump to accuse the FDA of slow-walking the therapy to harm his reelection chances without offering any evidence to support his claim.”

Washington Post: “Many scientists and physicians believe that convalescent plasma might provide some benefit but is far from a breakthrough. It is rich in antibodies that could be helpful in fighting the coronavirus, but the evidence so far has not been conclusive about whether it works, when to administer it and what dose is needed.”

“Republicans are playing catch-up with Democrats to boost the number of their voters requesting mail-in ballots in key states, an effort that is complicated by President Trump’s criticism of all-mail voting,” the Wall Street Journal reports.

“Nearly a quarter of the votes cast in the 2016 general election nationwide were by-mail… Fears of the coronavirus are expected to boost those numbers to unprecedented levels this year.”

White House chief of staff Mark Meadows told ABC News that the leaked audio from President Trump’s sister is “just another day and another attack” on the commander-in-chief.

Said Meadows: “I can tell you that I’ve never met the judge. I was at the funeral the other day. I was hoping to meet her there. She didn’t show up for her brother’s funeral. And the president that I have the privilege of serving is not the one that’s being described on a 15-hour, I guess is what I’m reading, secret tape. I mean, what family member tapes another family member for 15 hours secretly?”

Said Comey: “It’s another reminder of the kind of people this president surrounds himself with, at this point they could almost start their own crime family.”

He added: “It’s a very serious case, the Southern District of New York has laid it out in a very detailed indictment called a speaking indictment, and he’s in a world of trouble.”

“The Trump administration is considering bypassing normal US regulatory standards to fast-track an experimental coronavirus vaccine from the UK for use in America ahead of the presidential election,” the Financial Times reports.

“One option being explored to speed up the availability of a vaccine would involve the US Food and Drug Administration awarding ’emergency use authorisation’ in October to a vaccine being developed in a partnership between AstraZeneca and Oxford university, based on the results from a relatively small UK study if it is successful.”

Washington Post: “The president has limited authority to order law enforcement to patrol polling places. Sheriff’s deputies and police officers are commanded at the local level, and a federal law bars U.S. government officials from sending ‘armed men’ to the vicinity of polling places. But civil rights advocates said they feared Trump’s words could inspire local officials to act on his behalf. And they said even the threat of encountering police officers at the polls could be frightening to some voters, particularly in communities of color where residents are distrustful of the police.”