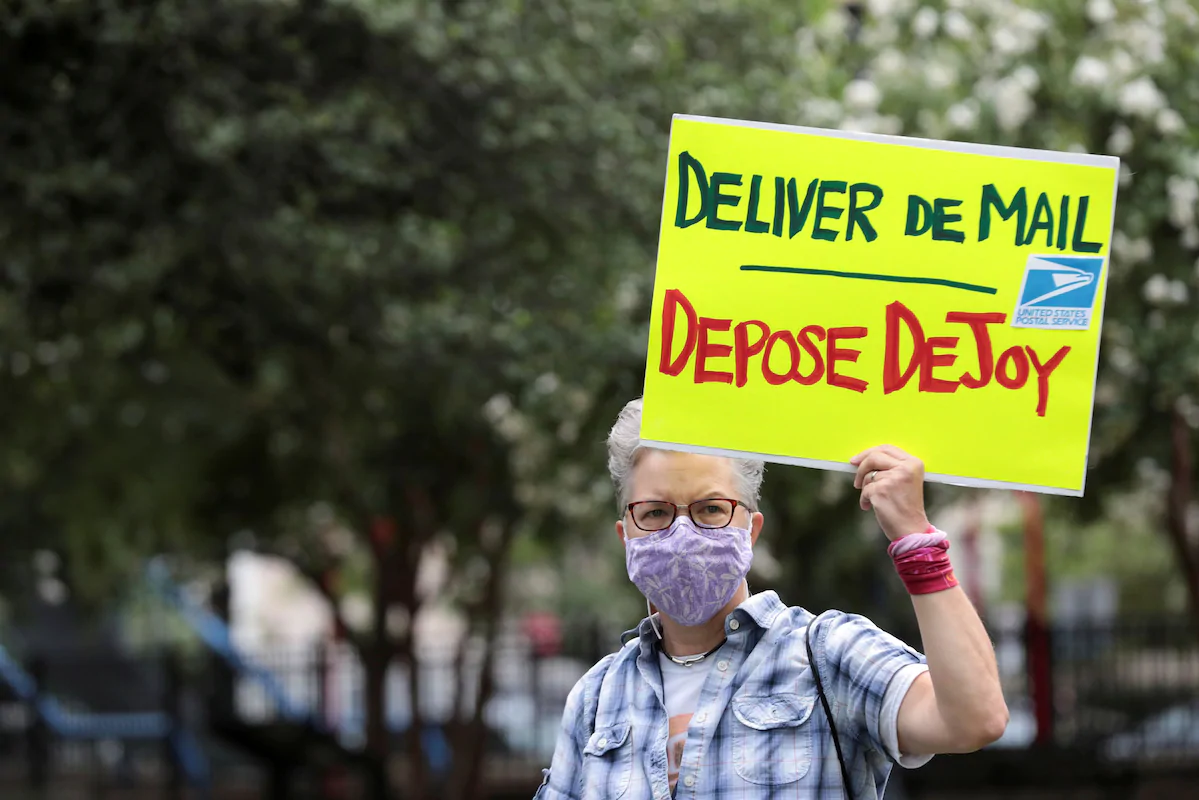 Lous DeJoy, postmaster general and Trump lackey, testified at the Senate Homeland Security Committee Friday that he would not reactivate the U.S. Postal Service (USPS) sorting machines that have been decommissioned (and in some cases destroyed). “There is no intention to do that. They’re not needed,” he told the committee. He said that the removal of those machines and mailboxes is perfectly regular and that he didn’t order it, “I was made aware when everyone else was made aware.” He said because of the “excitement” caused by the removal of mail collection boxes that he halted their removal, but didn’t commit to replacing them or to not resuming their removal after the election.

He did commit to meeting a first-class delivery schedule on election mail, telling Democratic Sen. Maggie Hassan that he would meet the delivery schedule that was in effect in 2018 for election mail. DeJoy focused on how he was just a logistics guy brought in to make “the trucks leave on time.” He acknowledged: “We had some delays in the mail,” adding: “the change that I made was one to our schedule, one to our transportation schedule. I believe we will get at least a billion dollars of savings out of that moving forward and this is the key connectivity to improving our service.”

He blamed workers sick with coronavirus for delays. “There was a slowdown in the mail when our production did not meet the schedule,” he said, “but also, our employees are experiencing the Covid pandemic also and we have a significant issue in employee availability in many, many parts of the country that are leading to delays in delivering the mail.” Democratic Sen. Gary Peters blew that assertion up, sharing a chart that the USPS itself shares with first-class customers demonstrating on-time mail delivery.

“There’s a flat line a long the top of the chart then it drops. Around July 11th you can start seeing the drop and by the 18th it falls dramatically.” The delays didn’t happen with the onset of coronavirus—they happened last month when the sorting machines were being ripped out.

DeJoy also stepped in it when he denied limiting and suspending overtime, which, as NBC’s Geoff Bennett tweeted, is disputed by “[e]very postal employee I’ve talked to (from coast to coast).” Knowing that he’s going to be appearing before a much less friendly House panel on Monday, DeJoy probably should have thought more carefully about his answers to the Senate.

“In the weeks before Republican donor Louis DeJoy was installed as postmaster general, Treasury Secretary Steven Mnuchin held a series of one-on-one meetings with members of the Postal Service Board of Governors,” NBC News reports.

“Because Mnuchin’s meetings were private one-on-one discussions, they were not subject to the Government in the Sunshine Act, which requires that federal agency meetings be disclosed to the public. Yet many on the board were aware of the get-togethers, one person said. Mnuchin was requesting briefings before a decision was made, which the person called ‘unusual.’ There was also discussion with Mnuchin about the ‘need to move quickly’ on a selection.”

The Washington Post has live updates from DeJoy’s testimony before the Senate this morning.

Steve Bannon, who was arrested on fraud and money laundering charges, has been telling friends he and President Trump have been communicating with one another in recent months, despite the president’s denials, CNN reports.

In a newly-discovered video clip from a 2019 “We Build the Wall” telethon, Steve Bannon jokingly brags about being on a “million dollar yacht” with Brian Kolfage, who Bannon quips paid for the yacht with “all that money” from donors.

Both men were arrested yesterday — Bannon was actually on a yacht — and charged with fraud and money laundering.

Bannon went on his podcast to call his arrest yesterday a “political hit job” after he was charged with fraud relating to a fundraising campaign aimed at supporting the U.S.-Mexico border wall. Said Bannon: “I’m not going to back down. This is a political hit job.”

Marianna Treviño-Wright, who was branded a “butterfly freak” by Steve Bannon and three others arrested for fraud and money laundering when she tried to block their wall on the Mexican border, told the Daily Beast: “I just wish them well in their cavity searches.”

Kris Kobach said in an interview last year that he had spoken with President Trump three times about the private border wall project that is currently at the center of a federal fraud investigation, CNN reports.

Said Kobach: “I’ve spoken to the President about this project on three occasions now. And he said — the first time I told him about it — he said, ‘well, you tell the guys at We Build The Wall, that they have my blessing.’ And he used those exact words.”

Joe Biden told ABC News that as president, he would shut the country down to stop the spread of COVID-19 if the move was recommended to him by scientists.

Said Biden: “I would shut it down; I would listen to the scientists.”

He added: “I will be prepared to do whatever it takes to save lives because we cannot get the country moving, until we control the virus. That is the fundamental flaw of this administration’s thinking to begin with. In order to keep the country running and moving and the economy growing, and people employed, you have to fix the virus, you have to deal with the virus.”

Late Friday night, the Second Circuit “denied President Trump’s attempt to halt the enforcement of a subpoena for his financial records but at the same time set a rapid schedule for oral arguments in the case, leaving a window of several days where prosecutors could seek to obtain the President’s tax returns,” CNN reports.

“The Second Circuit Court of Appeals scheduled oral arguments on whether to grant a ‘stay’ for September 1, raising the possibility that Trump’s financial records and tax returns could be turned over to prosecutors before the hearing — unless the President takes the case up to the Supreme Court or Vance’s office agrees to hold off for the appeals’ court decision.”

Politico: “A German ambulance plane stands ready to fly critically ill Kremlin opponent Alexei Navalny from Siberia to Berlin for treatment but doctors say he cannot be moved. Supporters of Navalny, who has been in a coma since Thursday morning after an alleged poisoning attack, accuse Russian authorities of trying to prevent his evacuation.”

“Demand for guns and ammunition is accelerating in the US ahead of November’s election, driven by consumer concerns about protests and civil unrest and by Americans seeing hunting as a socially distanced leisure pursuit during a pandemic,” the Financial Times reports.

Attorney General William Barr told the Associated Press that he would be “vehemently opposed” to any attempt to pardon former National Security Agency contractor Edward Snowden, after the president suggested he might consider it.

When Hillary Clinton was asked by MSNBC about her former Republican colleagues bowing to President Trump, she said it’s like they a had “a lobotomy or something.”

She continued: “They just have given up their principles, their values, their backbone to following Trump, regardless of where he leads, which they know, and I believe they know is, you know, unconstitutional, often illegal, reckless, wrong, whatever adjective you want to use. So I can’t explain it… I give credit to people like Mitt Romney who do stand up and speak out. But I wish that there had been more like Margaret Chase Smith, who was the first Republican senator who spoke out against Joe McCarthy back in the early 50s, you know where is that kind of leadership and it really saddens me that it seems to be absent.”

New York Times: “Employees at the Silicon Valley company are laying out contingency plans and walking through postelection scenarios that include attempts by Mr. Trump or his campaign to use the platform to delegitimize the results.”

“Facebook is preparing steps to take should Mr. Trump wrongly claim on the site that he won another four-year term… Facebook is also working through how it might act if Mr. Trump tries to invalidate the results by declaring that the Postal Service lost mail-in ballots or that other groups meddled with the vote.”

The Washington Post excerpts Trump on Trial, a new book that “lays out the backstory and aftermath of President Trump’s impeachment, including how his alarm-raising request to a foreign country centered on one person — his political rival Joe Biden.”

The book concludes Trump may never have been impeached had he not been worried about facing Biden in the presidential election.

“The convention drew an average 21.8 million viewers across six networks during the 10 PM ET to 11:15 ET time frame. That’s a slight uptick from the previous night, but still off about 21% from the Democratic convention finale in 2016.”