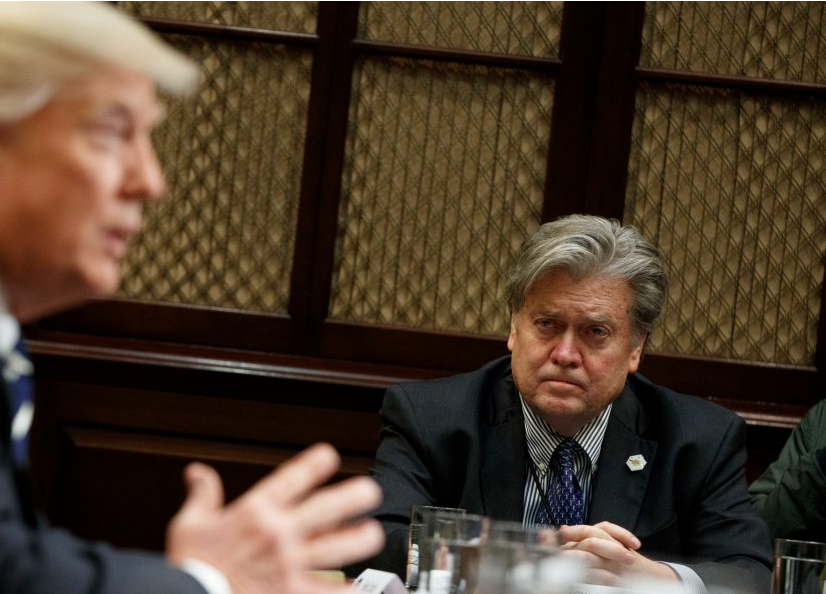 Bannon, along with three others, allegedly defrauded donors out of hundreds of thousands of dollars for their own profit with a crowdfunding campaign called “We Build the Wall” that raked in over $25 million.

Axios: “Bannon’s indictment makes him the sixth person linked to the senior leadership of the 2016 Trump campaign to be hit with federal charges. The others are Roger Stone, Michael Flynn, Rick Gates, Paul Manafort and Michael Cohen — all of whom faced indictments under the Mueller investigation.”

After listing the group of people involved in President Trump’s campaign who have been accused of federal crimes — Roger Stone, Paul Manafort, Rick Gates, Michael Flynn, Michael Cohen and now Steve Bannon — a reporter asked what all the lawlessness says about the President’s judgment.

Replied Trump: “Well, I have no idea.”

President Trump’s son, Donald Trump Jr., is seeking to distance himself from the “We Build the Wall” crowdfunding campaign after former White House chief strategist Stephen Bannon and three others were arrested and charged with defrauding donors, The Hill reports.

Said a spokesman: “Don gave one speech at a single We Build the Wall event over a year ago with a group of angel moms and besides that, has no involvement with their organization.”

“In early May 2018, after weeks of phone calls and private meetings, 11 of the president’s most senior advisers were called to the White House Situation Room where they were asked, by a show of hands vote, to decide the fate of thousands of migrant parents and their children,” NBC News reports.

“Frustrated, Miller accused Nielsen of stalling and then demanded a show of hands. Who was in favor of moving forward, he asked? A sea of hands went up. Nielsen kept hers down. It was clear she had been outvoted.”

“Shortly after USPS Postmaster General Louis DeJoy issued a public statement saying he wanted to ‘avoid even the appearance’ that any of his policies would slow down election mail, USPS instructed all maintenance managers around the country not to reconnect or reinstall any mail sorting machines they had already disconnected,” according to emails obtained by Motherboard.

“President Trump, a television producer at heart, is hoping for a convention next week that looks vastly different from the all-digital event Democrats have staged over the past days — including an emphasis on live programming and at least some type of audience who can respond to the multiple appearances he is planning,” CNN reports.

“Calling aides at all hours from Air Force One or the White House residence, Trump has conveyed last-minute ideas on venues or gimmicks and demanded progress reports on the speakers he wants during his nominating extravaganza, which he hopes will provide a boost to his poll numbers.”

Sen. Bill Cassidy (R-LA), who is also a doctor, has tested positive for the coronavirus, CNN reports. Cassidy posted a video yesterday of his visit to a medical center and is seen wearing a face mask, although it does slip past his nose at the end of the video.

First Read: “It was extraordinary to hear former President Barack Obama slam his successor and warn that America’s democracy is on the line in November. It was also extraordinary that it was hard finding observers – including Trump defenders – denying Obama’s accusations.”

“In fact, Trump’s own tweets responding to Obama only seemed to prove the 44th president’s point.”

President Obama: “He has shown no interest in putting in the work. No interest in finding common ground. No interest in using the awesome power of his office to help anyone but himself and his friends. No interest in treating the presidency as anything but one more reality show that he can use to get the attention he craves.“

“Obama’s remarks served to other-ize Trump – similar to what Trump does to his opponents.”

Michael Beschloss: “No former President has ever attacked his incumbent successor at a convention like Barack Obama tonight, or even come close.”

Wall Street Journal: “In the Senate, some Republicans are hoping to vote on a cheaper, pared-down version of the aid bill they unveiled last month, although some GOP aides said they saw early signs that it wouldn’t be able to muster a Senate majority. The new proposal, referred to as the skinny bill, is expected to cost about half of the earlier $1 trillion legislation, in an effort to appease GOP senators worried about the price tag of the federal government’s efforts in response to the coronavirus pandemic.”

“But Republican leaders are first assessing whether there will be enough GOP support to vote on the legislation, which is intended to demonstrate more GOP unity than the previous proposal and strengthen their hand in any coming negotiations.”

Brian Stelter offers an excerpt of his new book, Hoax: Donald Trump, Fox News, and the Dangerous Distortion of Truth, to Vanity Fair:

“Being the president’s ‘shadow chief of staff,’ as he was known around the White House, could be a thrill, but it was also a serious burden. Hannity counseled Trump at all hours of the day; one of his confidants said the president treated Hannity like Melania, a wife in a sexless marriage. Arguably, he treated Hannity better than Melania. Hannity’s producers marveled at his influence and access…  Hannity chose this life, so no one felt sorry for him, but the stress took its toll.”

Said one associate: “Hannity would tell you, off-off-off the record, that Trump is a batshit crazy person.” Another friend concurred: “Hannity has said to me more than once, ‘he’s crazy.’”

“But Hannity’s commitment to GOP priorities and to his own business model meant he could never say any of this publicly. If one of his friends went on the record quoting Hannity questioning Trump’s mental fitness, that would be the end of the friendship.”

“Russian opposition politician Alexei Navalny is in a coma and on a ventilator in a hospital intensive care unit in Siberia after falling ill from suspected poisoning during a flight,” the AP reports.

“The 44-year-old foe of Russia’s President Vladimir Putin felt unwell on a flight back to Moscow from Tomsk, a city in Siberia, and was taken to a hospital after the plane made an emergency landing in Omsk, Kira Yarmysh said on Twitter.”

“An associated page on Facebook has purchased more than 150 ads, which have been viewed hundreds of thousands of times this month. They appear designed to tap existing anxiety about the integrity of the voting system to convince voters in swing states where minority turnout could be decisive that mail balloting is not reliable amid an uncontained pandemic leading many Americans to consider alternative ways to be heard on Election Day.”

Stephen Collinson: “The latest installment of the long duel between Barack Obama and Donald Trump perfectly exemplified the jarring contrasts in personal and political temperaments of the two defining White House residents of this age. And it took their rivalry to a level unprecedented in the modern history of the presidency.”

“Obama — serious and intellectual — delivered a complex constitutional lecture on primetime television during the virtual Democratic National Convention. He summoned historic sweep, encompassing the Founders, the Civil Rights Movement, America’s immigrant heritage and young Americans he called to action today to save their freedoms just as their ancestors had done every time the country’s promise was imperiled.”

“Trump meanwhile, back at the White House, was rage-tweeting in real time in all-caps, flinging wild accusations and lies that, if anything, provided contemporaneous evidence of his predecessor’s somber warnings.”

Axios: “It was an extraordinary moment in American history — an ex-president saying the sitting president would tear down our democracy to hold power.”

“The new catchphrase, ‘We Are the Storm,’ is an unsubtle cue to a group that the F.B.I. has labeled a potential domestic terrorist threat. It is instantly recognizable among QAnon adherents, signaling what they claim is a coming conflagration between President Trump and what they allege, falsely, is a cabal of Satan-worshiping pedophile Democrats who seek to dominate America and the world.”

“The slogan can be found all over social media posts by QAnon followers, and now, too, in emails from the Texas Republican Party and on the T-shirts, hats and sweatshirts that it sells.”

“The United States will demand Thursday that all United Nations sanctions be reimposed against Iran, President Donald Trump said Wednesday, a move that follows America’s embarrassing defeat to extend an arms embargo against Tehran,” the AP reports.

“The administration’s insistence on snapping back international sanctions against Iran sets the stage for a contentious dispute. It’s possible that the U.S. call will be ignored by other U.N. members — an outcome that could call into question the U.N. Security Council’s ability to enforce its own legally binding decisions.”