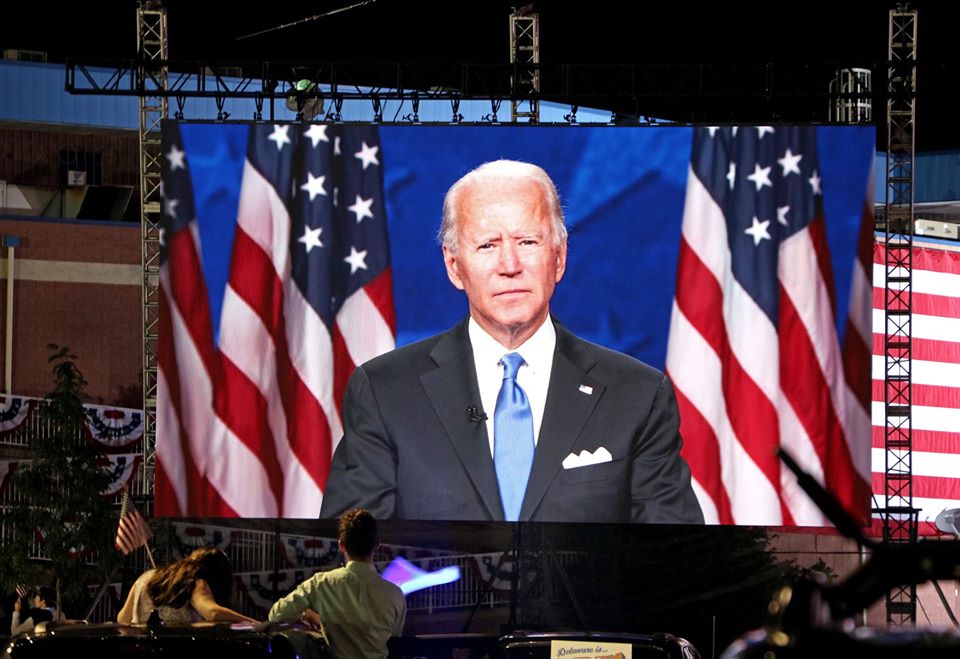 “Joe Biden on Thursday condemned the grim and divisive path that he asserted President Trump has set the country on, pledging in his acceptance speech of the Democratic presidential nomination to be a leader for all Americans, rather than playing only to his base,” Politico reports.

Said Biden: “Here and now I give you my word. If you entrust me with the presidency, I will draw on the best of us, not the worst. I will be an ally of the light, not the darkness.”

Josh Marshall: “This was a very powerful speech from Joe Biden, better than I expected. I don’t think of Biden is a great public speaker. That’s not really necessary for the job. But this was very powerful. It matched powerfully with the historical moment. I was struck listening to Biden’s speech that it made Trump seem like such a vacant, meaningless man. Which is to say it accurately captured him … but it did so largely as an absence.

Trump was a central focus of Biden’s speech and yet he seemed like such a thin presence, almost not even there. This in itself is something because Trump’s chaotic, predatory presence has been such a dominating one in our public life – echoing in our heads – through his presidency.

This speech was also another example that we are better for a virtual convention. Applause lines and crowd interaction would have diminished this speech. It was highly direct, close-up. Though it was obviously a tightly-tailored and considered speech, this made for something more intimate and direct. Seeing crowd shots and cheer lines and all that clutter of conventioneering only would have reduced the moment.

This matched with the whole program. As with the speech, the 2020 Democratic convention was highly produced. It would be foolish to suggest otherwise. There’s nothing wrong with that. But there was a DIY aesthetic to the whole effort – of necessity and real – that feels new, experimental, somehow hopeful itself notwithstanding this bleak pass we stand in in our national story.”

Politico: “In a campaign riddled with verbal gaffes and setbacks, where his cognitive abilities were questioned and his debate performances criticized, Joe Biden stepped up to the lectern and delivered the biggest speech of his life without a hitch. That in and of itself was no small feat for Biden, known for veering off script or tripping on his words in a way that party Democrats worried could play into the caricature put forward by Donald Trump and Republicans.”

“But the Democratic nominee appeared at ease as he struck somber notes about the coronavirus pandemic, at once grieving with those who lost loved ones and promising he would take decisive action if elected in November.”

Playbook: “Even if you’re a Republican, you have to admit that the Democratic convention … was a technical success. The Dems programmed a four-night television show, pulling feeds and videos from all across the country, without a major hitch. That’s a feat in and of itself — even if the content itself didn’t appeal to you.

Republicans have a lot to live up to, in that respect. Their convention — which kicks off Monday — already seems much different. The Trump Campaign  has invited most GOP lawmakers to the White House lawn to watch the president’s speech in the middle of a pandemic. They’ve filed a request to light fireworks on the National Mall. The Democratic convention was all about party unity and trying to defeat President Donald Trump.  Unity doesn’t appear to be a priority for Republicans — the White House left some of the president’s Capitol Hill enemies off the invite list. The GOP affair next week will be aimed at highlighting what the president has done in his first term — putting center stage everyday people affected by what the Republicans consider to be policy victories.”

David Siders: “For more than a decade, Joe Biden had been defined by association — to the president he worked for and, in its contrast, to the one he is trying to unseat. On Thursday, Biden set himself apart from them both. Biden, accepting the Democratic Party’s nomination for president on the convention’s final night, expanded on the searing indictment delivered Wednesday by former President Barack Obama and offered his own blistering criticism of President Donald Trump.

“And in a campaign that has served almost singularly as a referendum on Trump, he cast his candidacy as an affirmative alternative — a ‘path of hope and light.’ ‘We can choose a path of becoming angrier, less hopeful, more divided, a path of shadow and suspicion,’ Biden said. ‘Or we can choose a different path and together take this chance to heal, to reform, to unite.’”

“The final night of the Democratic National Convention was a star-studded affair, stacked with beloved celebrities and respected politicians — but it was 13-year-old Brayden Harrington who stole the show,” The Week reports.

Said Brayden: “About a few months ago I met him in New Hampshire. He told me that we were members of the same club: we stutter. It was really amazing to hear that someone like me became vice president.”

If you missed it, watch the video.

A new Morning Call/Muhlenberg College poll in Pennsylvania shows Joe Biden with a narrow lead over Donald Trump, 49% to 45%.

Former Virginia Gov. Terry McAuliffe (D) has filed the paperwork to run for his old office, the Washington Post reports.

But a spokesman said he won’t make an official decision to run until after the general election in November.

He did not explain how dead voters answer polls.

“If you want a vision of your life under Biden’s presidency, think of the smoldering ruins of Minneapolis, the violent anarchy of Portland, the bloodstained sidewalks of Chicago, and imagine the mayhem coming to your town and every single town in America.” — President Trump, quoted by CNN, apparently forgetting that he’s president now.

New York Times: “The new letter, released just hours before Mr. Biden formally accepts the nomination, lays out a 10-point indictment of Mr. Trump’s actions, accusing him of undermining the rule of law, aligning himself with dictators and engaging ‘in corrupt behavior that renders him unfit to serve as president.’”

Jonathan Bernstein: “It wasn’t just President Barack Obama, who gave a stirring speech. The party also has four women in the Senate who ran for president in this cycle, and two of them — Senator Elizabeth Warren and vice presidential nominee Kamala Harris — both gave fine performances on Wednesday. So did former nominee Hillary Clinton and House Speaker Nancy Pelosi. And then there was former Representative Gabby Giffords, her career tragically disrupted, who gave perhaps the most gripping and courageous speech of the night. There simply aren’t Republican women of similar stature.”

“As for male luminaries, the Democrats have the benefit of three former presidents while Republicans have only one — and that one appears to be neither interested in attending nor welcome at his party’s convention. The same goes for the 2012 Republican nominee. Their 2008 nominee received a tribute narrated by his widow at the Democrats’ event because his memory wouldn’t be honored by his own party.”

“The TV viewership is off by about 11% from the third night of the Democratic Convention in 2016.”

Speaker Nancy Pelosi is endorsing Rep. Joe Kennedy in the Massachusetts U.S. Senate race, putting her in the very rare position of backing a challenger to a Democratic incumbent, the Boston Globe reports.

“Kanye West shouldn’t be on the presidential ballot in Wisconsin this November,” the Milwaukee Journal Sentinel reports. “That is the recommendation of the Wisconsin Elections Commission staff after reviewing his nomination petition and two challenges to them.”

“A Republican-backed effort to qualify Montana Green Party candidates for the general election has been rejected by the Montana Supreme Court,” the AP reports.

“The Montana Republican Party had bankrolled the $100,000 signature-gathering effort and violated campaign finance laws by not properly reporting the expenditure.”

“Ed Good, a 95-year-old veteran of World War II and the Korean War, told the convention he has been a Republican since the 1960s. He voted for Trump and is a member of the National Rifle Association. Good endorsed Biden for president,” CNBC reports.

Said Good: “I think Trump has been the worst president we’ve ever had, so I’ll be glad to see him go.”

Kyle Kondik: “Several national pollsters conducted surveys on the eve of the convention season in both 2016 and 2020. We compared them to see how the race was different from four years ago.”

“Compared to four years ago, the parties are more unified; Biden is leading with independents after Clinton and Trump were tied with them at this point; and more poll respondents support the major party candidates overall.”

“In other words, there are fewer undecideds and fewer voters saying they will vote third party.”

Senate Majority Leader Mitch McConnell (R-KY) will give taped remarks as part of the Republican convention next week, his campaign confirmed, The Hill reports.

The announcement comes after his campaign initially indicated on Thursday that he would not speak as part of the convention.