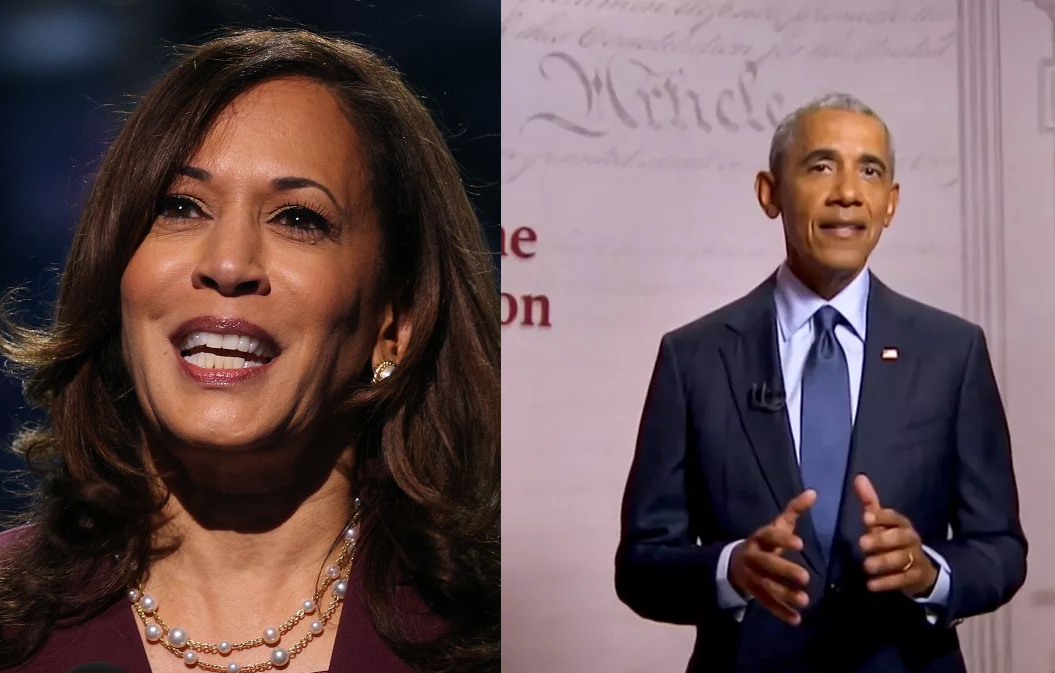 News Journal: “Sen. Kamala Harris became the first Black woman and Indian American to be on a major party’s ticket Wednesday night when she officially accepted the Democratic Party’s nomination for vice president.

In her prime-time speech, Harris explained her vision for America, in which “all are welcome, no matter what we look like, where we come from, or who we love.”

She weaved in her personal story — the child of Indian and Jamaican immigrants, whose single mother influenced her to pursue public service — while also criticizing the president’s handling of the coronavirus, and the devastating effects it has had on people of color. “

President Obama: “I never expected that my successor would embrace my vision or continue my policies. I did hope, for the sake of our country, that Donald Trump might show some interest in taking the job seriously; that he might come to feel the weight of the office and discover some reverence for the democracy that had been placed in his care. But he never did.”

Los Angeles Times: “The tone of Wednesday’s event made it clear that much had changed since the last DNC, when the top female candidate took great pains to soften her tough-as-nails reputation and to make herself more palatable to an American public that was wary of her ambitious nature, her feminist education, her former life as a lawyer, her political life and, yes, even her pantsuits. …

“Poised to become our first female VP, Black VP and South Asian VP, Harris has inspired optimism, not fear, among Democrats, and that’s a feat in itself for a formidable female candidate in contentious times.

“Wednesday felt like proof that Harris had smashed yet another glass ceiling: she was being celebrated rather than shamed for breaking tradition. When Pelosi, Clinton and Warren, all of whom helped pave the way for Harris, spoke in support of her, they made a point to highlight the warrior side of Harris — and the challenges of being a woman, especially in Trump’s America.”

Ryan Lizza: “The former president delivered a memorable speech that balanced torching the sitting president with assuring voters of the possibility of something better. All the while, he pulled back the historical view to 30,000 feet where it was possible to show voters the sweep of American history and remind them that the country, despite what he called ‘these dark times,’ has faced bigger challenges than Trump.”

“Obama accused Trump of failing to ‘discover some reverence for the democracy that had been placed in his care.’ He essentially accused him of corruption and abuse of power, saying Trump had ‘no interest in using the awesome power of his office to help anyone but himself and his friends.’ And he accused his successor of a dangerous form of narcissism when he said that Trump had ‘no interest in treating the presidency as anything but one more reality show that he can use to get the attention he craves.’”

Playbook: “On Wednesday, we made the argument that the Democratic convention was being conducted in abstraction, the speakers attempting to will their political wishes to reality. But, in the last 24 hours, President Donald Trump has given real-time illustration to many of the dynamics Democrats are trying to bring to the light for the American public.

Bill Clinton said Tuesday night that “if you want a president who defines the job as spending hours a day watching TV and zapping people on social media, he’s your man.” And on Wednesday night, Trump tweeted about a conversation on Fox News, and then spent the 10 and 11 p.m. hour live-tweeting Barack Obama’s and Kamala Harris’ speeches in all caps.

Of course, everything he said was a lie, no matter if he was screaming in all caps.

“Kamala Harris is tapping into a new tranche of campaign cash for Joe Biden: money from both big and small donors who were reluctant to give to the white, male and over-70 nominee-in-waiting before she arrived,” Politico reports.

“Biden has turned things around since struggling to raise money in 2019, but Harris’ addition is exciting contributors anew. She has a deep familiarity with Democratic mega-donors from Silicon Valley to New York, and her history-making candidacy is now drawing interest from more casual givers as well as big donors who got a shot of excitement from Harris’ elevation.”

Joe Biden raised questions about President Trump’s mental capacity, saying he did not have the intellectual know-how to combat the coronavirus pandemic, the Washington Post reports.

Said Biden: “After months of failure, he just gave up. You know, I used to think it was because of his personality, but I just don’t think he can intellectually handle it. I don’t think he’s competent enough to know what to do. He just waved the white flag.”

Said Dent in a piece written for CNN: “Biden is fundamentally a decent and honorable man who respects the American tradition, supports the rule of law, embraces America’s friends and allies, and will restore some semblance of normalcy to the functioning of government. That’s all I want — and not too much to ask of a President. Biden will perform these duties respectfully and with dignity.”

“I am challenging you to a socially distanced, Lincoln-Douglas style debate with a time-keeping moderator agreed upon by each of us. This would be a debate just between the two of us. No notes at the table, no props, and no audience.”

People magazine got the first joint interview with Joe Biden and Kamala Harris:

PEOPLE: Sen. Harris, are you going to be the kind of VP to tell him when he’s wrong?

HARRIS: We already have that understanding. I’m going to be the last one in the room — and there to give him honest feedback. Being vice president to Joe Biden to me means supporting his agenda and supporting him in every way.

Washington Post: “Party conventions are often about humanizing the candidate, but the effort has taken on a special resonance this year, as President Trump’s reelection may depend on persuading voters to dislike Biden even more than they dislike the unpopular incumbent.”

“Republicans four years ago successfully made Hillary Clinton a hated figure to many voters, and this year’s Democratic convention represents an intensive effort by the party to avoid a repeat by portraying Biden as a compassionate, caring figure, even if not the most exciting.”