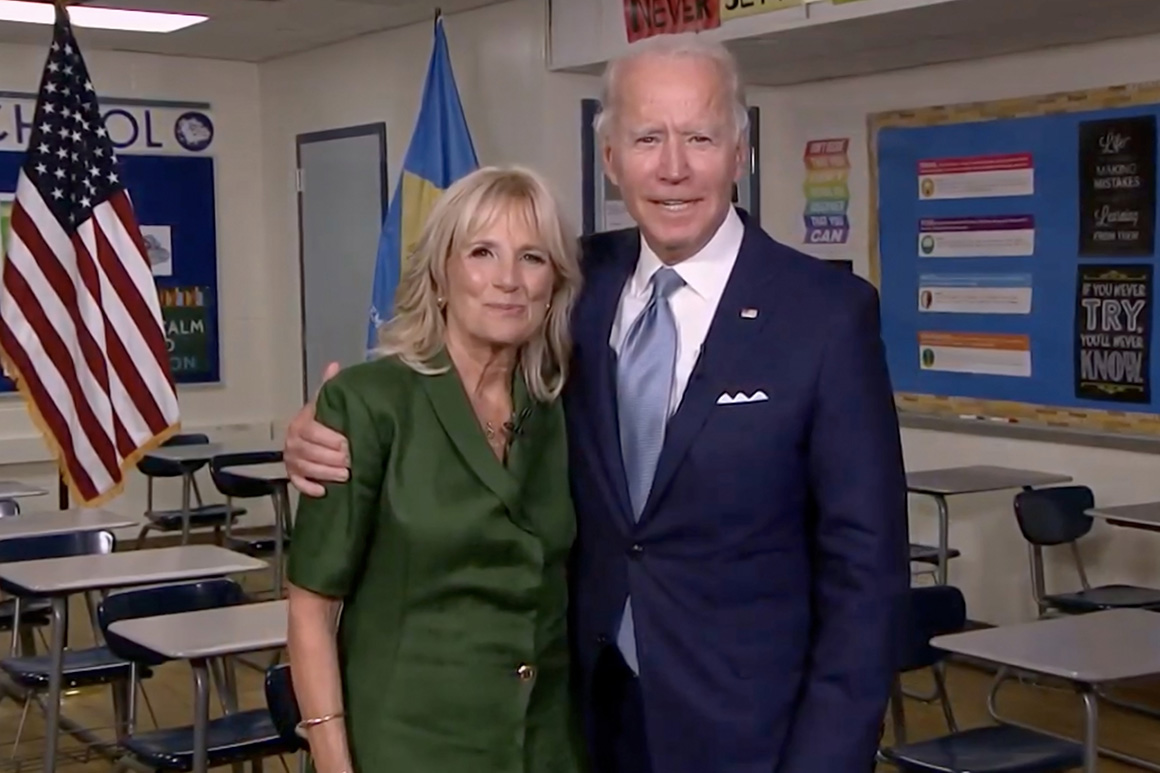 AP: “Democrats formally nominated Joe Biden as their 2020 presidential nominee Tuesday night, as party officials and activists from across the nation gave the former vice president their overwhelming support during his party’s all-virtual national convention.

The moment marked a political high point for Biden, who had sought the presidency twice before and is now cemented as the embodiment of Democrats’ desperate desire to defeat President Donald Trump this fall. […]

David Siders: Jill Biden’s role this year is more important. Democrats are acutely aware that Biden remains only softly defined for large swaths of the electorate, and on Tuesday, Biden sought to personalize him.

Speaking from a school in Wilmington, Delaware, Jill Biden said she “fell in love with a man and two little boys standing in the wreckage of unthinkable loss, mourning a wife and mother, a daughter and sister” after the 1972 car crash that killed Biden’s wife and daughter.

“How do you make a broken family whole?” she said. “The same way you make a nation whole, with love and understanding and with small acts of kindness. With bravery, with unwavering faith. You show up for each other in big ways and small ones again and again.”

Playbook: Biden’s campaign will air a one-minute ad tonight featuring Barack Obama heaping praise on his former VP. “WHO HE IS” features Obama talking about Biden’s character as he awarded him the Presidential Medal of Freedom in 2017. The ad will air nationally on cable networks ahead of the convention, and is part of the campaign’s $24 million paid media program this week

“In a nationwide rule change that went unnoticed this summer, the U.S. Postal Service has forbidden employees from signing absentee ballots as witnesses while on duty,” the Anchorage Daily News reports.

“The change could make it more difficult for Alaskans, particularly rural residents, to vote by mail.”

“In Alaska and several other states, absentee ballots must be signed by a witness who can verify that a ballot was legitimately filled out by a particular voter. Without a signature, the ballot will not be counted.”

“Freshman Rep. Ross Spano (R-FL), who is facing a Justice Department investigation over alleged 2018 campaign finance violations, was ousted in the GOP primary Tuesday by a candidate who secured the endorsement of one of Spano’s well-known congressional colleagues,” the Washington Post reports.

“Scott Franklin was projected to win the GOP nomination in the 15th Congressional District encompassing Lakeland and the Tampa suburbs… Rep. Matt Gaetz (R-FL), an ally of President Trump, had endorsed Franklin, warning that an incumbent dogged by ethics woes could cost the GOP the seat.”

“Tens of thousands of Georgia voter registrations are on track to be changed to inactive status because absentee ballot applications mailed to them in the spring were undeliverable,” the Atlanta Journal Constitution reports.

Politico: “Nikki Haley has long been suspected of angling for a future White House run. So it wasn’t surprising when the former UN ambassador reached out to President Donald Trump recently to ask to speak during next week’s Republican National Convention.”

“The president agreed — and in recent weeks, he has remarked privately about the throng of potential 2024 aspirants who’ve made requests for coveted speaking slots. Trump’s reelection is up in the air, but Republicans with national aspirations are already maneuvering to be the GOP’s standard bearer in four years — an under-the-radar campaign that will burst into the open at the convention.”

Said Taylor: “I’m not going to mention any other names yet, but the president can expect that in the coming weeks and months he is going to hear from more people that served in his administration.”

Washington Post: “The St. Louis couple who became famous after wielding guns at protesters on their private street will be part of the largely digital Republican National Convention next week, Trump advisers said this week. The couple — Patricia and Mark McCloskey — will appear on behalf of the president during the virtual weeklong event and express their support for him, the officials said.”

President Trump’s campaign launched its most brutal ad of the 2020 election, suggesting Joe Biden has experienced severe mental decline over the past four years.

Jonathan Swan: “The new ad splices footage of Biden speaking energetically and articulately in 2015 and 2016 alongside clips of him stumbling over his words and appearing to lose his train of thought during the 2020 campaign.”

“It’s the harshest president campaign attack in what is shaping up to be an even uglier messaging year than 2016.”

Jonathan Bernstein: “Modern political conventions have two basic jobs. They need to offer a compelling speaker with a compelling speech in the slim prime-time broadcast window. And they must produce lots of video clips that can be repurposed across all sorts of platforms, from news programs to social media to paid advertisements.”

“The Democrats achieved both on the first night of their first virtual convention. Former First Lady Michelle Obama gave an outstanding speech, and the rest of the two-hour program included plenty of usable clips.”

“Was the whole thing compelling television? Of course not — just as the platform presentations of regular conventions aren’t.”

Matt Glassman: “This format really does distill the modern convention to its infomercial essence.”

Jonathan Bernstein: “I’m skeptical that Republicans are going to put together an equally professional presentation next week. Democrats realized that they weren’t going to Milwaukee months ago; President Trump held out hope that he’d be giving a live speech to cheering supporters until very recently. Meanwhile, Biden’s campaign has been largely stable while Trump’s has been in turmoil.”

Associated Press: “Typical conventions have moments for television analysts to comfortably opine, when there’s a set change, a boring speaker who drones on too long or lengthy applause by delegates.”

“Yet there were fewer obvious moments to slip away Monday. CNN and MSNBC essentially sidelined their onscreen talent to show virtually all the production. Others missed moments in order to get in some words edgewise.”

Pollster John Anzalone told Politico that the Biden campaign intends to continue conducting full polls until the end of the race and not rely solely on analytics surveys as the Clinton campaign did over the final month in 2016.

“I have learned about the hot mic.” — Michigan Gov. Gretchen Whitmer (D), quoted by The Recount, after mouthing an expletive ahead of her speech at the Democratic convention.

0 comments on “The Campaign Report – Joe officially the nominee”