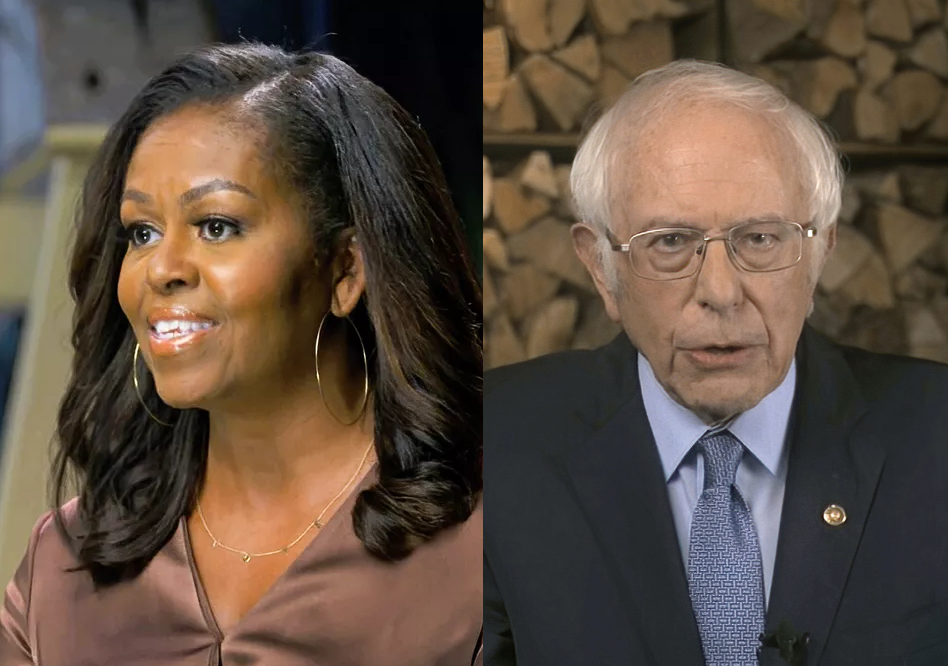 “Donald Trump is the wrong president for our country. He has had more than enough time to prove that he can do the job, but he is clearly in over his head. He cannot meet this moment. He simply cannot be who we need him to be for us. It is what it is.” — Michelle Obama, quoted by the Associated Press.

Monday’s speeches were framed by emotional appearances from average Americans touched by the crises that have exploded on Trump’s watch.

Philonise and Rodney Floyd led a moment of silence in honor of their brother, George Floyd, the Minnesota man whose death while in police custody sparked a national moment of awakening on racial injustice.

Kristin Urquiza, an Arizona woman who lost her father to COVID-19, which has killed more than 170,000 Americans as of Monday evening.

“My dad was a healthy 65-year-old,” she said. “His only preexisting condition was trusting Donald Trump, and for that, he paid with his life.”

Key finding: “Trump has a 12-point advantage in the Badger State among white voters without a college degree, while Biden leads with the state’s college-educated voters by 23 points.”

“In addition to measuring Trump’s overall job approval rating, the survey asked Americans to rate the president’s handling of seven different issues. On none of these does Trump receive majority approval; his 48% positive rating for handling the economy comes closest.”

The new Decision Desk forecast predicts that Joe Biden has an 85.6% chance of winning the presidency.

Bloomberg: “And though Kamala Harris was not the most progressive woman under consideration to be Biden’s running mate, she was Bernie Sanders’s preferred choice, a person familiar with his thinking said. He, like Biden, saw the California senator as the best boost for the ticket’s chances against Trump.”

First Read: “The bad news for Trump is that he still has a 50 percent problem in the poll — where half (if not more) of the national electorate is firmly against him. And that’s a tough place for any incumbent to be.”

Cook Political Report: “While there are still large hurdles that remain for Jaime Harrison to become the first Democrat elected to the Senate from South Carolina since 1998, it’s clear this race is becoming more competitive, and Graham faces an incredibly strong challenge.”

“In the races in our Likely Republican column, this is also the one some national Republicans view as the more competitive. We are moving South Carolina from Likely to Lean Republican.”

Several women tell World Magazine that Madison Cawthorn (R), who is running for Congress in North Carolina’s 11th congressional district, “exhibited sexually or verbally aggressive behavior toward them when they were teenagers.”

A new Wall Street Journal/NBC News poll finds 47% of voters who back Joe Biden plan to vote by mail rather than in person, compared with 11% of Donald Trump supporters.

By contrast, 66% of Trump voters say they plan to cast ballots in person on Election Day, compared with 26% of Biden supporters.

Amber Phillips: How to make sure your vote is counted.

A spokesperson for former House Speaker John Boehner (R-OH) shot down rumors his boss might endorse Joe Biden: “The answer is no. I think he’d rather set himself on fire than get involved in the election. Nothing to see here.”

The self-described “senior Trump administration official,” who anonymously trashed the president’s leadership in a 2018 op-ed and a 2019 best-selling book, is calling for voters to throw the president out of office this November in a new preface for the paperback “2020 election edition” of the book, Politico reports.

“Anonymous” said last year that they would reveal their identity to Trump before the election, but the person stays nameless in the latest edition, only saying they plan to unveil themselves in “due course.”

Writes Taylor: “I can attest that the country is less secure as a direct result of the president’s actions.”

“Mike Bloomberg plans to spend $60 million to strengthen the Democratic House majority in November, roughly matching the money he invested in flipping control of the House in 2018,” the Washington Post reports.

“The spending will include digital and television ads to defend some of the 20 freshman Democrats he helped win in 2018, along with spending aimed at defeating additional Republican incumbents.”