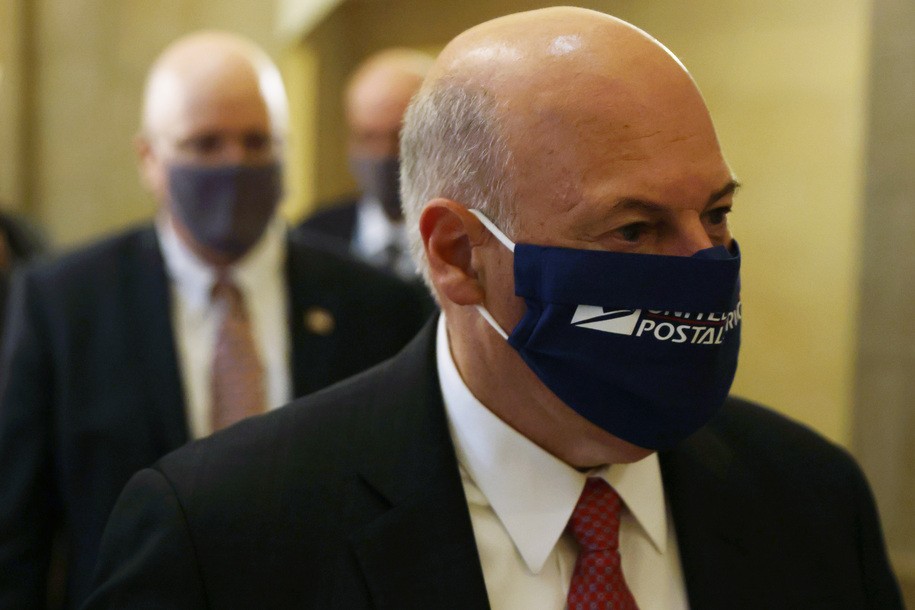 Speaker Nancy Pelosi and House Democratic leadership are considering returning from August recess as early as next week to consider legislation addressing issues at the U.S. Postal Service, CNN reports.

Axios: “The Democrats discussed the move during a 5:30 p.m. call — hours after demonstrators rallied outside the home of Postmaster General Louis DeJoy to protest his leadership amid allegations of limiting mail-in voting ahead of the 2020 general election.”

“An order signed by President Trump to boost unemployed workers’ weekly benefits will not deliver any new aid to South Dakota, where Republican Gov. Kristi Noem appeared to become the first state leader to decline the heightened federal support,” the Washington Post reports.

“Noem, one of Trump’s most vocal allies, said South Dakota did not need to accept the additional federal jobless aid because workers in the state are being rehired, and its economy is on the mend, even as the coronavirus pandemic continues to rage across the United States.”

When White House chief of staff Mark Meadows was told on CNN that there is no evidence of widespread voter fraud, Meadows replied: “There’s no evidence that there’s not either.”

His remarks signal a shift for Trump, who repeatedly denigrated Snowden as a “traitor” and a “spy who should be executed” in the years before his election.

“President Trump has told aides he’d like to hold an in-person meeting with Russian President Vladimir Putin before the November election,” NBC News  reports. “Administration officials have explored various times and locations for another Trump-Putin summit, including potentially next month in New York.”

“The goal of a summit would be for the two leaders to announce progress towards a new nuclear arms control agreement between the U.S. and Russia.”

New York Times: “Robert Trump, the younger brother of President Trump, died on Saturday night at New York-Presbyterian Hospital in Manhattan. He was 72.”

“The White House did not provide a cause of death.” Tony Schwartz, the ghost writer of Trump’s autobiography, says sources tell him the younger Mr. Trump had a neurological condition and brain bleeds that were worsening over the last few months after he suffered a fall.

Joe Biden on Twitter: “Mr. President, Jill and I are sad to learn of your younger brother Robert’s passing. I know the tremendous pain of losing a loved one — and I know how important family is in moments like these. I hope you know that our prayers are with you all.”

Kamala Harris on Twitter: “Doug and I join the Biden family in sending our deepest condolences and prayers to the entire Trump family during this difficult time. Losing a loved one is never easy but know that we are thinking of you.”

President Trump said that he “considers firing everybody” when asked if he considered firing Secretary of Defense Mark Esper, The Hill reports. Washington Post: Trump appears to mock his Pentagon chief.

“President Trump’s unprecedented attacks on the U.S. Postal Service amid widespread mail delays across the country are shaking voters’ faith that their ballots will be counted, prompting a rush among federal, state and local officials to protect the integrity of the Nov. 3 election,” the Washington Post reports.

“Thousands of voters have called government offices in recent days to ask whether it is still safe to mail their ballots, according to officials across the country. Attorneys general from at least six states are huddling to discuss possible lawsuits against the administration to block it from reducing mail service between now and the election.”

“State leaders are scrambling to see whether they can change rules to give voters more options, and Democrats are planning a massive public education campaign to shore up trust in the vote and the Postal Service.”

Washington Post: “Soon after taking office in 2017, President Trump seized on the U.S. Postal Service as an emblem of the bloated bureaucracy. “A loser,” he repeatedly labeled one of America’s most beloved public institutions, according to aides who discussed the matter with him.

“Allies coddled Trump by telling him the reason he lost the popular vote to Hillary Clinton in 2016 was widespread mail-in balloting fraud — a conspiracy theory for which there is no evidence — and the president’s postal outrage coarsened further.

“Then Trump complained to senior White House advisers that Jeff Bezos — a presidential foe in part because he owns The Washington Post, whose news coverage the president thought was unfair and too tough on him — was ’getting rich’ because Amazon had been ’ripping off’ the Postal Service with a “sweetheart deal” to ship millions of its packages, one of them recalled. They explained that this was not true and that the Postal Service actually benefited from Amazon’s business, the adviser added, but the president railed for months about what he described as a ’scam.’

“And now Trump has fixated again on the Postal Service, this time trying to make it a tool in his reelection campaign by slowing mail service, blocking an emergency infusion of federal funds and challenging the integrity of mail-in balloting. The president acknowledged last week that his opposition is rooted in his desire to restrict how many Americans can vote by mail.

NPR: Trump’s new postmaster general hasn’t met with state election officials. A bipartisan group of secretaries of state, who are responsible for running elections, requested to meet this week with Louis DeJoy, who was appointed to the job in May, but the meeting hasn’t been scheduled. Election officials are expected to begin sending out absentee ballots as soon as September.

NBC News / New York Times: The CDC suggested that people who have recovered from COVID-19 can safely interact with others for three months. While the CDC still recommends physical distancing, mask-wearing, and other precautions, the agency’s updated guidance on quarantining states that people should quarantine if they’ve been in close contact with someone who has COVID-19, “excluding people who have had COVID-19 within the past 3 months.” Further, people who have tested positive for the virus don’t need to be tested for up to three months as long as they don’t develop symptoms.

Washington Post / Bloomberg: The CDC asked four states and one city to draft plans for how they would distribute a coronavirus vaccine when limited doses become available. The Defense Department, meanwhile, will handle manufacturing logistics, including acquisition of raw material, establishing factories, and training workers. Trump also announced a collaboration with McKesson Corp to aid in vaccine distribution.

Reuters / Washington Post: U.S. researchers will manufacture a strain of the coronavirus that could be used in human challenge trials of vaccines, in which healthy volunteers would be vaccinated and then intentionally infected with the virus. The work is preliminary and the trials would not replace large-scale, Phase 3 trials.