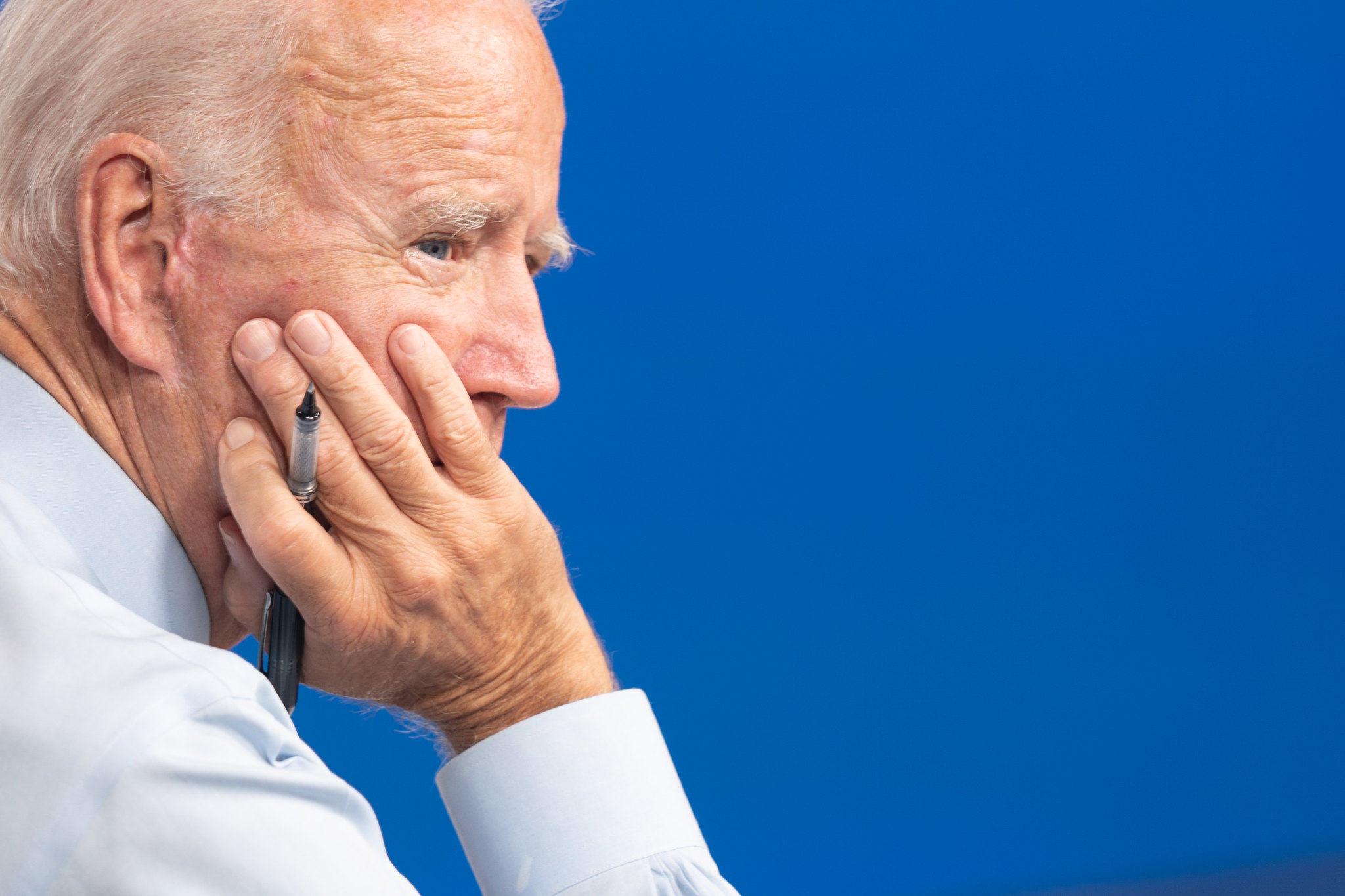 A new ABC News/Washington Post poll finds Joe Biden holds a 12 percentage-point lead over Donald Trump among registered voters, 53% to 41%, and a similar 10 points among likely voters, 54% to 44%.

Key finding: Just 14% of Americans say the coronavirus pandemic is under control.

Also interesting: The poll shows Kamala Harris with a higher net personal rating than either Trump or Biden possess.

The outlier of the weekend polls is a new CNN poll finds Joe Biden leading Donald Trump nationally by just four points, 50% to 46%. This poll has a history of jumping up and down: April Biden +11; May Biden +5; June Biden +14; August Biden +4. So no worries. It’s just one poll.

“Among the 72% of voters who say they are either extremely or very enthusiastic about voting this fall, Biden’s advantage over Trump widens to 53% to 46%.”

“Across 15 battleground states, the survey finds Biden has the backing of 49% of registered voters, while Trump lands at 48%.”

A new ECU poll in North Carolina finds Joe Biden and Donald Trump tied in the presidential race, 47% to 47%.

Olivia Nuzzi looks at the “most disorganized, unscrupulous, self-sabotaging presidential campaign since the last one.”

Especially interesting is a quote from a White House official on former campaign manager Brad Parscale’s role: “Brad was willing to do whatever Jared said and keep quiet about it. Brad was willing to get yelled at by the president and not say to the president, ‘Well, actually, this was Jared’s decision.’ And Jared got to rule from afar because Brad would do whatever he said. In return, Brad made a fuck-ton of money and got to live by the pool in Florida. It was almost like this weird mutual partnership, whether they knew it or not.”

Nuzzi adds: “The portrait of the operation that emerged was so dysfunctional that I felt, at times, like I needed to hire a family therapist to moderate my interviews.”

The whole piece is worth reading.

Harry Enten: “Biden’s lead has been about as stable as they come. Since the beginning of June, he’s been up by around 8 to 10 points. We’ll see whether the convention period, that begins tomorrow, alters the race.”

“For now though, we can say Biden’s doing better than any challenger heading into the major party conventions since scientific polling began.”

“In the 13 previous elections in which an incumbent was running for another term, no challenger has ever been at or above 50% in the polls at this point in the campaign.”

A new ABC News/Washington Post poll finds more Americans approve than disapprove of Joe Biden’s choice of Sen. Kamala Harris for the 2020 Democratic ticket by a 25-point margin, 54% to 29%.

Approval of the pick ranges from 86-8% among Democrats to 25-55% among Republicans — notable that one in four Republicans approves.

Seventeen rising Democratic stars will together give the keynote address at the party’s convention on Tuesday, Bloomberg reports.

Washington Post: Unconventional Democratic convention will juggle hundreds of live feeds to re-create the feel of a party celebration.

Associated Press: “Forced to abandon their in-person convention in Milwaukee because of the pandemic, Democrats begin their all-virtual affair on Monday night. There will be no physical gathering place, no cheering audience, no balloons. The program will consist of a series of online video addresses — roughly half of which will be prerecorded — that play out for two hours each night until Biden formally accepts the Democratic presidential nomination Thursday in a mostly empty Delaware ballroom.”

“While that may sound underwhelming, the last hour of the speaking program each night will be broadcast live on network television and feature the Democratic Party’s elite: Barack Obama and Michelle Obama, Bill Clinton and Hillary Clinton, Sen. Elizabeth Warren, Sen. Bernie Sanders and Mayor Pete Buttigieg. Even a Republican former Gov. John Kasich, will speak on Biden’s behalf.”

Washington Post: “In two-hour nightly chunks, only one hour of which the broadcast networks have vowed to air, the live footage will be mixed in real time with a roughly equal share of prerecorded performances, mini-documentaries and speeches.”

New York Times: “The idea that there are substantial numbers of Trump voters who will emerge from hiding on Election Day, large enough to sway the outcome, is not supported by the latest public opinion research — or by a proper understanding of what happened in past elections where the voter surveys were off, said pollsters who work for Republican and Democratic candidates.”

“This does not mean that Joe Biden’s lead, with the most recent national polls putting him ahead by as much as 10 points, won’t tighten. And public opinion experts say there is growing evidence that Americans across the spectrum have become more skittish about sharing their political preferences outside of a trusted group of like-minded people. But it would be a huge leap to conclude that the country’s tense political dynamics are causing people to lie to pollsters in large enough numbers to explain Mr. Trump’s poor standing.”

David Wasserman: “African American voters account for roughly 12 percent of eligible voters nationally, and they account for a substantial share of the vote in six of the seven states Trump carried by 5 points or less in 2016: Florida (15 percent), Georgia (32 percent), Michigan (13 percent), North Carolina (22 percent), Pennsylvania (10 percent) and Wisconsin (6 percent).”

“An NBC News/Cook Political Report analysis of census and election data from these states shows that the decline in African American turnout and Democratic support from 2012 to 2016 was likely enough to tip at least Michigan and Wisconsin — and possibly Florida and Pennsylvania — to Trump.”

Just a few hours before Joe Biden accepts the Democratic presidential nomination, President Trump is heading to Old Forge, Pennsylvania, to deliver his own remarks on “Joe Biden’s record of failure.”

Old Forge is just a few miles outside of Scranton, Pennsylvania, which happens to be Biden’s birthplace and where he spent part of his childhood before his family moved to Delaware.

Axios: “Joe Biden’s team hasn’t booked any air travel — and thus has no need to lease an aircraft with the Democratic nominee’s name and logo emblazoned on the side, a candidate tradition for decades.”

Former Ohio Gov. John Kasich told CNN there’s a prominent former Republican congressman that is going to endorse Joe Biden tomorrow. He declined to say who it was.

“Sen. Ed Markey is going where few Massachusetts Democrats have dared to go before. He’s not only attacking his challenger, Rep. Joe Kennedy III, he’s throwing shade at the Kennedy family, the state’s equivalent of political royalty,” Politico  reports.

“In an ever more contentious battle between a septuagenarian senator and the scion of one of the nation’s best-known dynasties, Markey is calling out specific Kennedy family members by name, needling the wealth and privilege that attaches to the family name, and even drawing from the Kennedy myth in his bid to fend off his youthful challenger.”

3 comments on “The Campaign Report – It Begins”