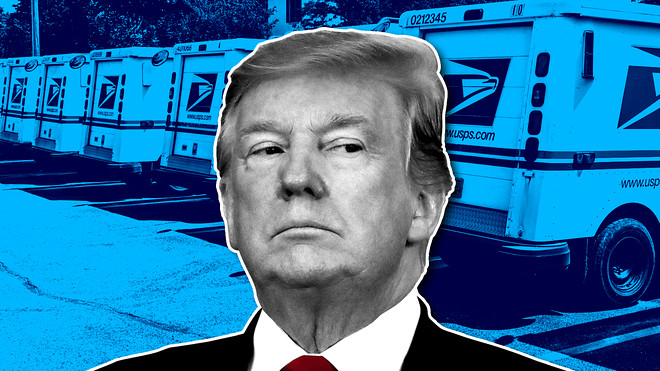 President Trump continued his ongoing attacks on mail-in voting during a press conference Saturday, claiming without strong evidence that voting by mail will make the U.S. a “laughingstock,” Axios reports.

Said Trump: “Universal mail-in voting is going to be catastrophic. It’s going to make the U.S. a laughingstock all over the world.”

He added: “The problem with the mail-in voting, number one, you’re never going to know when the election’s over.”

“The removal of dozens of mailboxes in a handful of states set off a social media panic and some high-profile attention this week, but the U.S. Postal Service said the iconic blue boxes are just being moved to higher-volume areas,” the Washington Post reports.

“The agency said it would stop removing the boxes nationally until after the election.”

A 15-year-old boy with no underlying conditions has died in Georgia after contracting COVID-19, the Atlanta Journal Constitution reports.

The boy’s death comes as many Georgia school districts have reopened for in-person learning.

Health experts say children make up more than 7% of all coronavirus cases in the US — while comprising about 22% of the country’s population — and the number and rate of child cases have been “steadily increasing” from March to July, CNN reports.

He added: “And there’s no way to spin that in a positive light.”

Speaker Nancy Pelosi told CNN that progress on negotiations for a new coronavirus relief bill is “complicated by the complete disarray on the Republican side — as President Trump contradicts his own negotiators and his own position.”

“The country is doing very well right now. We can live very happily with it or without it.” — President Trump, at a press conference, on why he won’t negotiate a new coronavirus relief bill.

Playbook: “With a pandemic coursing through America, Congress is home for the month, and won’t return until mid-September. With an election 81 days away, congressional leaders left town without coming to a deal with the White House on a stimulus relief bill that could help ease the pain of struggling Americans. It seems exceedingly unlikely a deal will come together before Sept. 30 — if at all.”

President Trump was supposed to throw out the first pitch at the Yankees game last night in New York but canceled because of his “strong focus on the China Virus, including scheduled meetings on Vaccines, our economy and much else.”

Here is the President’s public schedule for the yesterday.

The Senate Intelligence Committee sent a bipartisan letter to the Justice Department in July 2019, seeking an investigation into former Trump adviser Steve Bannon and outlined accusations against Bannon lying to lawmakers when he testified about Russian interference in the 2016 election, the Los Angeles Times reports.

“For months, public health experts and federal officials have said that significantly expanding the number of coronavirus tests administered in the United States is essential to reining in the pandemic. By some estimates, several million people might need to be tested each day, including many people who don’t feel sick,” the New York Times reports.

“But the country remains far short of that benchmark and, for the first time, the number of known tests conducted each day has fallen.”

“Joe Biden is calling for a nationwide protective mask mandate, citing health experts’ predictions that it could save 40,000 lives from coronavirus over the next three months,” the AP reports.

Said Biden: “Wearing the mask is less about you contracting the virus. It’s about preventing other people from getting sick… This is America. Be a patriot. Protect your fellow citizens. Step up, do the right thing.”

“The Secret Service sought to bolster its protection of the White House with surveillance aircraft and a Blackhawk helicopter carrying a ‘fast rope’ commando team after crowds protesting the police killing of George Floyd knocked down temporary barricades and one man got onto the complex grounds in late May,” the Washington Post reports.

“That breach — combined with the throngs of protesters that converged outside the White House the night of May 29 — prompted agents to rush President Trump to a reinforced bunker and spurred a deeper concern about the White House’s vulnerability.”

“U.S. stocks are hovering near a record high, a stunning comeback since March that underscores the new phase the economy has entered: The wealthy have mostly recovered. The bottom half remain far from it,” the Washington Post reports.

“This dichotomy is evident in many facets of the economy, especially in employment. Jobs are fully back for the highest wage earners, but fewer than half the jobs lost this spring have returned for those making less than $20 an hour.”

“Though recessions almost always hit lower-wage workers the hardest, the pandemic is causing especially large gaps between rich and poor, and between White and minority households. It is also widening the gap between big and small businesses.”

New Jersey Gov. Phil Murphy (D) said it won’t be a “regular election year” because of the coronavirus outbreak and the state will move to a nearly all-mail election this November following the model the state used in its July primary, the AP reports.

Murphy said that he will sign an executive order calling for all registered voters to get a ballot beginning October 5 along with a prepaid return envelope.

Ballots postmarked by November 3 will be accepted up to a week later.

Rep. Jim Hagedorn (R-MN) paid a Texas-based company owned by one of his staff members more than $100,000 of taxpayer money for printing postcards — a business relationship Congressional ethics experts say is a clear violation of government ethics rules, the Minnesota Reformerreports.

“Hagedorn also paid hundreds of thousands of dollars for printing to a separate, mysterious company that has existed for less than a year and seems to have gone to great lengths to conceal its ownership.”