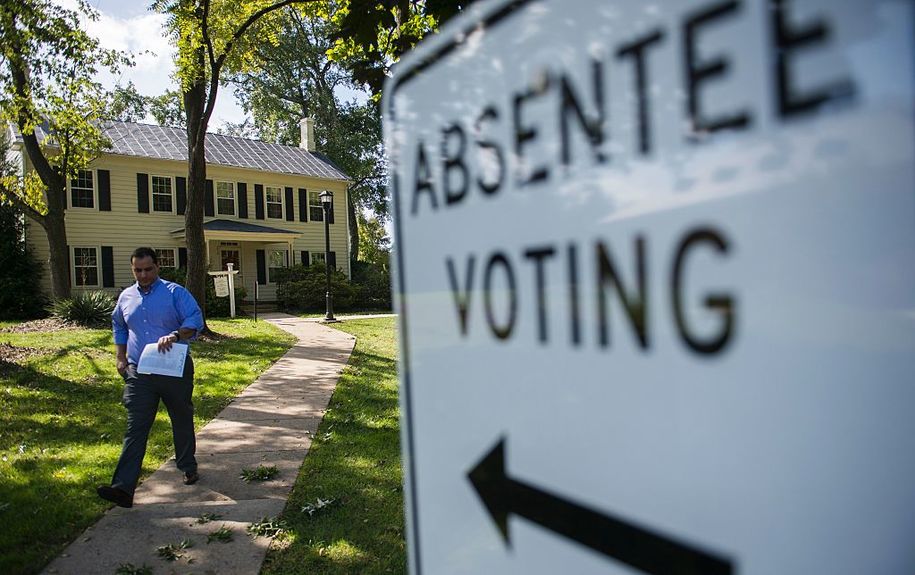 “Anticipating an avalanche of absentee ballots, the U.S. Postal Service recently sent detailed letters to 46 states and D.C. warning that it cannot guarantee all ballots cast by mail for the November election will arrive in time to be counted — adding another layer of uncertainty ahead of the high-stakes presidential contest,” the Washington Post reports.

“The letters sketch a grim possibility for the tens of millions of Americans eligible for a mail-in ballot this fall: Even if people follow all of their state’s election rules, the pace of Postal Service delivery may disqualify their votes.”

CNN: “Officials say that in the last week the USPS has removed letter collection boxes in at least four states: New York, Oregon, Montana and Indiana. The USPS has also begun notifying postal workers in at least three states — West Virginia, Florida and Missouri — that they will start to reduce their retail operating hours, according to union officials.”

Jonathan Bernstein: “The thing is that Trump, by opposing money for the U.S. Postal Service and supporting ‘reforms’ that have slowed it down, is just handing former Vice President Joe Biden yet another easy campaign issue. Democrats may or may not be able to overturn new procedures that are causing significant problems, but they certainly can make sure that anyone who’s waiting on a letter or a package thinks that Trump is responsible when it doesn’t show up on time. And that’s not the kind of thing politicians want voters to blame them for.”

Sen. Susan Collins (R-ME) said that “efforts by the U.S. Postal Service to cut costs could backfire amid reported mail delays in Maine and across the country and reiterated support to increase funding to the embattled agency,” the Bangor Daily News reports.

Sen. Mitt Romney said that politicians “attacking the vote by mail system are threatening global democracy but stopped short of criticizing President Trump, who has been openly against an expected surge of mail-in ballots,” the AP reports.

Said Romney: “That’s more important even than the outcome of the vote. We have got to preserve the principle of democracy or the trend we’re on is going to continue to get worse.”

New York Times: “The lawyer, Kevin Clinesmith, 38, who was assigned to the Russia investigation, plans to admit that he altered an email from the CIA that investigators relied on to seek renewed court permission in 2017 for a secret wiretap on the former Trump campaign adviser Carter Page, who had at times provided information to the spy agency.”

“Mr. Clinesmith had written texts expressing opposition to President Trump, who is sure to tout the plea agreement as evidence that the Russia investigation was illegitimate and politically motivated.”

“The private health care technology vendor that is helping to manage the Trump administration’s new coronavirus database has refused to answer questions from top Senate Democrats about its $10.2 million contract, saying it signed a nondisclosure agreement with the federal Department of Health and Human Services,” the New York Times reports.

Jill Colvin of the Associated Press asked President Trump about GOP congressional candidate Marjorie Taylor Greene’s (R) support for QAnon and whether he agrees with it. Trump would only say she did very well in the election but would not answer the question.

At a press conference on Thursday, a reporter asked President Trump, “After three and a half years, do you regret all the lying you’ve done to the American people?”

Trump did not answer and quickly moved on to the next question.

Benton said the Ku Klux Klan “was not so much a racist thing, but a vigilante thing to keep law and order.”

Of John Lewis, he said: “His only claim to fame was he got conked on the head at the Edmund Pettus Bridge… and he has milked that for 50 years.”

Fact Check: “In late June, Joe Biden claimed President Donald Trump ‘wants to cut off money for the post office so they cannot deliver mail-in ballots.’ At the time, we wrote that the presumptive Democratic presidential nominee had no evidence of Trump’s ulterior motive — but now he does.”

“In an Aug. 13 interview, Trump admitted that he opposes a coronavirus pandemic relief bill crafted by the House Democrats because it includes funding the U.S. Postal Service and state election officials — funding that Trump said is needed to allow the Postal Service to handle an expected surge in mail-in voting.”

“A federal judge appointed by Donald Trump gave the president’s campaign one day to turn over evidence to support its claims of widespread mail-in voting fraud or admit that it doesn’t exist,” Bloombergreports.

“In posts published on the now-defunct ‘American Truth Seekers’ website in 2017, Greene wrote favorably of the QAnon conspiracy theory, suggested that Hillary Clinton murdered her political enemies, and ruminated on whether mass shootings were orchestrated to dismantle the Second Amendment.”

In one post, Greene chronicled what she claimed was “disturbing behavior that seems to keep raring it’s ugly heads. Child Sex, Satanism, and the Occult all associated with the Democratic Party.”

Walter Shaub, the former Director of the Office of Government Ethics, tweets:

“My sincere belief is that it’s far worse than you think and will get worse than most imagine. I pray I’m wrong. But the next several months will determine the fate of the world, and you have the privilege of deciding that fate with your actions. You won’t get a second chance.”

The Government Accounting Office ruled that acting Homeland Security Secretary Chad Wolf and his principal deputy Ken Cucinelli are ineligible to be serving in their current roles because they were appointed illegally, the Washington Post reports.

Robert Trump, the younger brother of President Trump, is hospitalized in New York, CNN reports. ABC News says the details of his condition remain unknown though he is described by several sources as “very ill.” It is unknown whether Robert Trump is ill with COVID-19.

Barack Obama: “Everyone depends on the USPS. Seniors for their Social Security, veterans for their prescriptions, small businesses trying to keep their doors open. They can’t be collateral damage for an administration more concerned with suppressing the vote than suppressing a virus.”

“If you’re in a state where you have the option to vote early, do that now. The more votes in early, the less likely you’re going to see a last minute crunch, both at polling places and in states where mail-in ballots are permitted. Then tell everyone you know.”

A cluster of Republican lawmakers is apparently considering a plot to oust House Minority Leader Kevin McCarthy, as the GOP ponders its post-Trump future, the Washington Post reports.

“According to interviews with more than 10 House Republicans — all of whom spoke on the condition of anonymity to be frank — some GOP lawmakers are worried that McCarthy has tied the conference too much to Trump, refusing to stand up to the president or act as a buffer to distinguish the conference from him.”

“Others are also furious that he didn’t shield them from a recent Trump campaign demand that House members donate to the president’s reelection effort.”