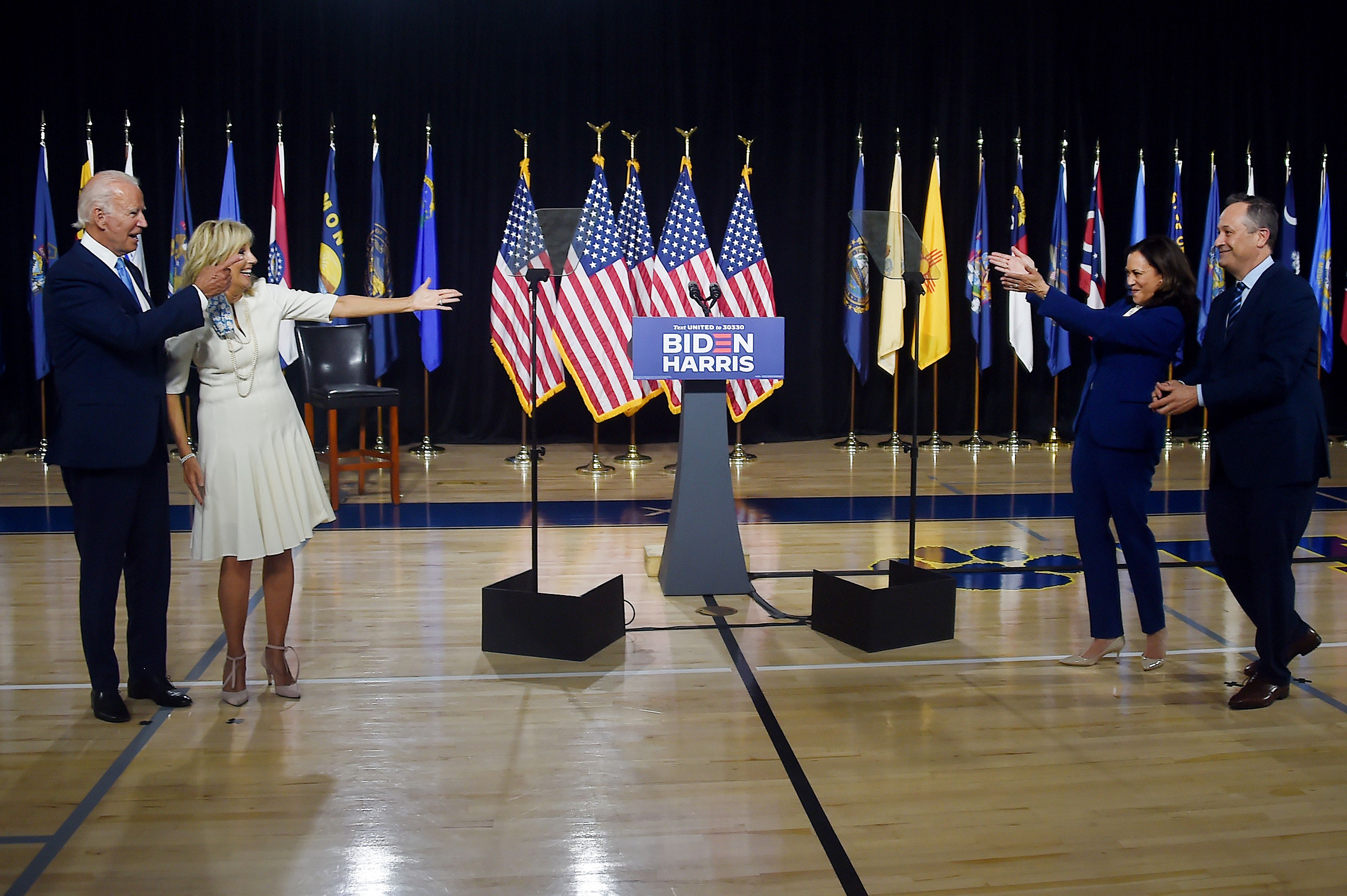 A new NPR/PBS NewsHour/Marist poll finds Joe Biden now leads Donald Trump nationally, 53% to 42%, up from an 8-point advantage at the end of June.

A new Navigator Research poll finds Biden ahead, 52% to 42%.

A new Monmouth poll finds 22% of the public says the country is headed in the right direction while 72% says it is on the wrong track. The “wrong track” number has been above 70% since early June.

A new Pew Research poll finds 83% of registered voters say it really matters who wins the presidency, up from 74% four years ago and the highest share saying this in two decades of surveys.

“Ready to Lead” will run in Wisconsin, Michigan, Pennsylvania, North Carolina, Florida, Arizona and Nevada, weaving in Biden’s call for a universal mask mandate with a pledge to produce more protective gear in the U.S.

White House economic adviser Larry Kudlow dismissed “voting rights” in stalled talks over a coronavirus relief package, saying on CNBC that it’s part of a “liberal left wishlist” and that it’s “not our game.”

Said Kudlow: “So much of the Democratic asks are really liberal left wish-list. We don’t want to have, you know, voting rights and aid to aliens, and so forth. That’s not our game, and the president can’t accept that kind of deal.”

The U.S. Postal Service has warned Pennsylvania that some mail ballots might not be delivered on time because the state’s deadlines are too tight for its “delivery standards,” prompting election officials to ask the state Supreme Court to extend the deadlines to avoid disenfranchising voters, the Philadelphia Inquirer reports.

If the court agrees, that could increase the likelihood that the results of the presidential race between President Trump and Joe Biden won’t be known for days after the election.

“And the president who has just spent the past few weeks excoriating mail-in voting has less than a week to cast it.”

Washington Post: “All the women with a shot at becoming Joe Biden’s running mate first had to face the same, sometimes jarring questions in an initial interview: What would your agenda be? What do you think Donald Trump’s nickname for you would be?”

“It was the opening gantlet of an arduous voyage — interviews followed by interviews in some cases, a public scrutiny that surfaced old foes or embarrassing quotes in the media, and for the 11 finalists, a deep examination by an individualized panel of 12 to 15 lawyers that culminated in time with Biden himself.”

Joe Biden and Sen. Kamala Harris will deliver their convention speeches at the Chase Center in Wilmington next week, the Wilmington News Journal reports.

President Trump confirmed to the the New York Post he intends to give his Republican National Convention speech from the White House lawn, defying critics who said the location was inappropriate.

“During an exclusive Oval Office interview, the president said he would visit the battlefield at Gettysburg at a ‘later date’ and described his vision of a socially-distanced speech in front of supporters at the executive mansion in Washington, DC later this month.”

“The Supreme Court on Thursday rebuffed the Republican Party and allowed a consent decree to go forward so that Rhode Island voters during the coronavirus pandemic could cast mail-in ballots without in-person witness verification,” the Washington Post reports.

“It was the first time the justices had agreed to a pandemic-related voter relief effort. But they explained in a short, unsigned order that state officials had agreed to relax the rules, and the change already had been implemented during the June primary.”

Stephen Collinson: “Never mind meddling by Russia, China or Iran. The most dangerous threat to the integrity of November’s election is coming from the man sworn to protect it, the President of the United States.”

“Trailing badly in the polls, overtaken by the worst health crisis in 100 years and deprived of the cruising economy he had hoped to ride to a second term, President Donald Trump is actively trying to discredit an election that could see him turned out of office — or is at least preparing the groundwork for a bitter legal battle that could drag on for weeks in the event of a close result.”

“Andrew Yang said he was added to the Democratic National Convention’s list of speakers, after he expressed disappointment earlier this week at not being invited to address the event,” CNN reports.

“President Trump gave credence to a false and racist conspiracy about Kamala Harris’ eligibility to be president, fueling an online misinformation campaign that parallels the one he used to power his rise into politics,” the AP reports..

“Speaking from the White House, Trump told reporters he had ‘heard’ rumors that Harris, a Black woman and U.S.-born citizen whose parents were immigrants, does not meet the requirement to serve in the White House. The president said he considered the rumors ‘very serious.’”

President Trump told the New York Post that his campaign is “putting New York in play” against Democrat Joe Biden in the 2020 election.

Said Trump: “Over the last six months what’s happened is insane. It’s insane. So we’re going to try very hard to win New York and that will be the first time — is that since Ronald Reagan, I guess? Since Ronald Reagan.”

Washington Post: “The first potential issue is if Kushner encouraged West to do something proactive that could benefit Trump’s campaign, such as running for office. If Kushner solicited from West what could be valued at more than the legal limit of $2,800, it could be considered an in-kind contribution to the Trump campaign.”

“The second issue is if they coordinated about the campaign — i.e., if Kushner encouraged West to do something specific when it comes to launching or running a campaign.”

Rick Hasen: “West surely is spending more than $2,800 on his campaign. If he’s doing so in coordination with the Trump campaign to help Trump win, that could count as an excessive contribution to the campaign and be illegal.”

“President Trump’s reelection campaign has sued two Democratic-leaning Iowa counties that are making it easy to vote by mail during the coronavirus pandemic, seeking to invalidate tens of thousands of voters’ absentee ballot applications,” the AP reports.

“At issue are absentee ballot request forms that the counties are sending to registered voters with personal information already filled in, including their names, dates of birth and voting pin numbers. Voters just have to review, sign and return the forms to get ballots in October that they can mail back or drop off, avoiding crowded polling places.”

Amy Walter: “According to the FiveThirtyEight model, Biden’s 9.6% lead in June has narrowed to an 8.3% lead in July. In trying to account for the change, we often dig into the cross tabs to see which demographic groups are responsible for this movement. Is it from seniors? Or those Obama-Trump voters? What about non-college white men?”

“In analyzing the last 18 months of polling from the Polling Consortium (which includes over 20,000 interviews), the AFL-CIO’s Mike Podhorzer has found that most of that movement can be attributed to a group he dubs ‘partisan bystanders.’ These are people who either hate both parties or don’t have strong feelings one way or the other about either party. Some of them aren’t paying all that much attention to politics. Some of them are more checked in on politics. But, they are not deeply invested in their partisan allegiances. Podhorzer estimates that about 15% of the electorate falls into the ‘bystander’ category.”

“In order for Trump to make a meaningful dent in Biden’s margin, he needs to make Biden an unacceptable alternative — or hope that Biden does that on his own through some sort of flub or misstep… But if this race stays on the same steady trajectory it’s been on for the last 18 months, Trump remains the decided underdog.”

California Gov. Gavin Newsom (D) said he has already received a number of pitches from people who are seeking to fill Democratic vice presidential nominee Kamala Harris’s Senate seat if she and Joe Biden win the White House this November, The Hill reports.

Said Newsom to a reporter: “You may be the only one that hasn’t, unless you just did, and that is only slight exaggeration.”

Rep. Alexandria Ocasio-Cortez (D-NY) responded to President Trump’s insult calling her a “poor student” by challenging him to release his own college transcripts. Said the freshman lawmaker: “Let’s make a deal, Mr. President: You release your college transcript, I’ll release mine, and we’ll see who was the better student.” She added: “Loser has to fund the Post Office.”