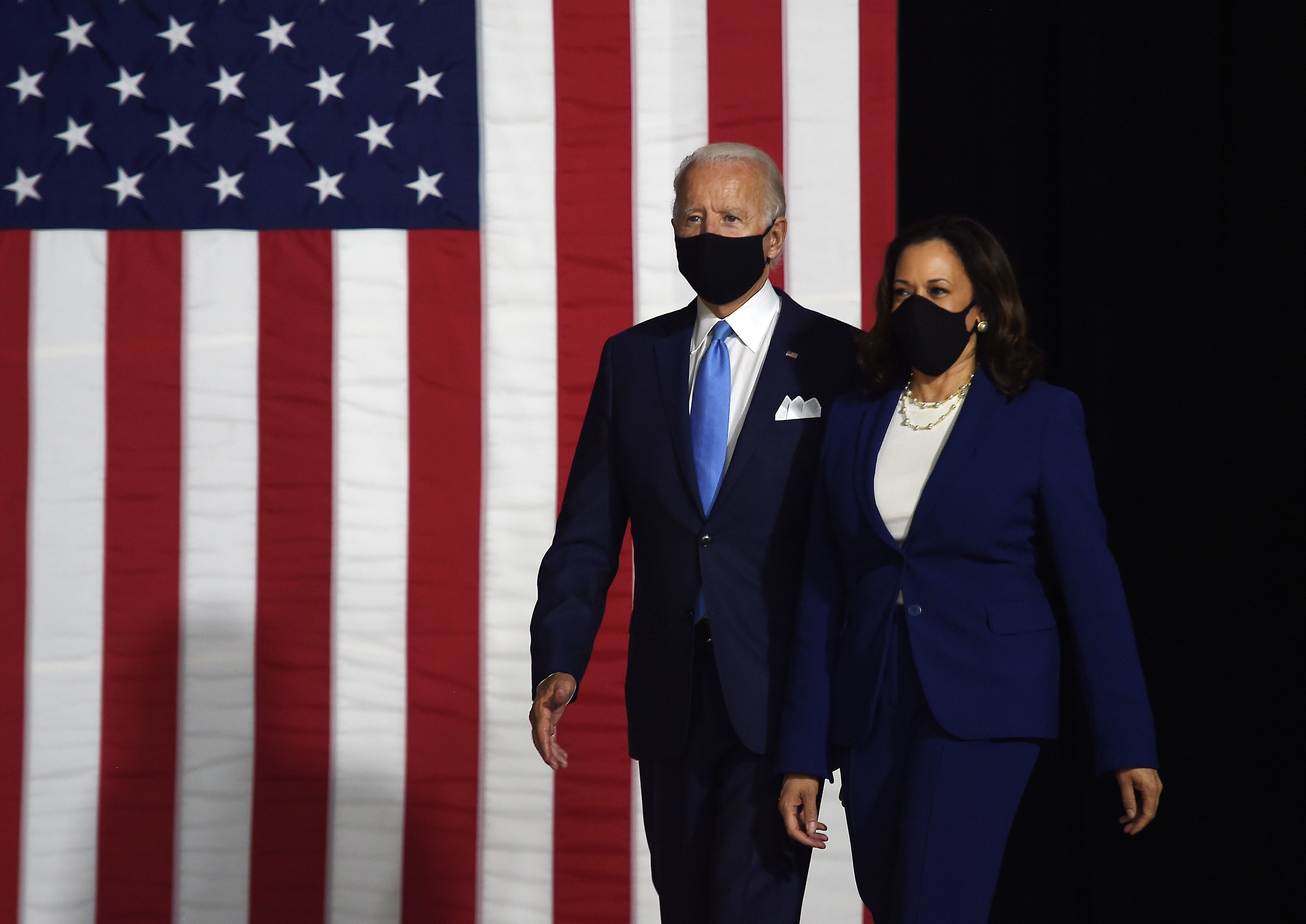 Nearly nine out of 10 Democrats approve of Sen. Kamala Harris as their party’s vice presidential nominee, and she is more popular than presidential candidate Joe Biden among women, young voters and some Republicans, according to a Reuters/Ipsos poll.

The survey also found that 60% of Americans, including 87% of Democrats and 37% of Republicans, considered the selection of Harris – the first Black woman and Asian American nominated for vice presidency – to be a “major milestone” for the United States.

“I asked Kamala to be the last voice in the room. To always tell me the truth, which she will. Challenge my assumptions if she disagrees. Ask the hard questions. Because that’s the way we make the best decisions for the American people.”

— Joe Biden, quoted by McClatchy, on how he views Kamala Harris’s role as vice president.

First Read: “Joe Biden’s pick of Kamala Harris to be his vice presidential nominee yesterday made history — and it was also widely viewed in the political world as the likeliest choice. Which is why it’s so surprising that Republicans seemed so unprepared with a strategy to define her.”

“The GOP’s messaging on Harris was mixed from the start. Is she a finger-in-the-wind pol or a hardened leftist? Power-hungry or just a ‘puppet’ of radicals? ‘In lockstep’ with Biden or causing a ‘liberal revolt’ from disappointed progressives?”

“Is she actually ‘against everything that Black Americans are screaming about today’ because of her record as a prosecutor? Or is she soft on crime and ‘marching in the streets with the BLM organization’?”

Axios has rounded up information on early voting and mail-in ballots for every state.

“Like everything else he inherited, he ran it straight into the ground.”

In a Fox Business interview, President Trump slammed Sen. Kamala Harris as “sort of a madwoman,” the Daily Beast reports.

Said Trump: “She was so angry, such hatred with Justice Kavanaugh. I’ve never seen anything like it. She was the angriest of the group, and they were all angry.”

He then went after Rep. Alexandra Ocasio-Cortez (D-NY), who he called “not even a smart person” who “goes out and yaps,” seemingly upset that a politician has the nerve to deliver public speeches.

Next on his list was Speaker Nancy Pelosi who he called “stone-cold crazy.”

NBC News has a very good deep dive into the process that led Joe Biden to pick Sen. Kamala Harris.

“Joe Biden raised $26 million in the 24 hours after he named Kamala Harris as his running mate, doubling his previous one-day record and signaling enthusiasm among Democrats following the selection of the first Black woman on a major party’s presidential ticket,” the AP reports.

Jared Kushner has been speaking with Kanye West “amost daily” since the rapper announced he was running for president, Forbes reports. He also met privately last weekend with Kanye, the rapper who has filed petitions to get on the November ballots for president in several states, the New York Times reports.

A new Morning Consult poll finds Kanye West with 10% to 80% favorable rating among voters who voted for Hillary Clinton in 2016. With Donald Trump’s voters, West has a 25% to 54% favorable rating.

A group seeking to place rapper Kanye West’s name on the Montana’s presidential ballot this fall has spent the past few days gathering signatures from residents, telling them their signature could help take votes away from Joe Biden, the Billings Gazette reports.

Said one organizer: “You want to help Trump? We’re trying to take votes away from creepy Uncle Joe.”

President Trump “warned that GOP Senate candidates who don’t fully embrace him will lose their elections, a warning shot to some moderates who have kept their distance from the president,” The Hill reports.

Said Trump: “We’re fighting very hard in the Senate. I’ll be honest, the Senate is tough. We have a couple of people that aren’t as supportive of Trump as they should be and those people are going to lose their elections.”

Herman Cain’s Twitter account shared an attack on Joe Biden and his running mate Kamala Harris despite the former Republican presidential candidate having died a few weeks ago, Newsweek reports.

NBC News: “Despite having months to prepare for the probable outcome that Harris would be chosen, the Trump re-elect effort countered with a series of contradictory and at times confusing messaging on the California senator, on everything from her record as a California prosecutor to her positioning in the party.”

“Some allies of the president were stunned that the rejoinder appeared to be so flat-footed and incongruous, reiterating that Trump and his campaign have had trouble landing a punch on presumptive Democratic nominee Joe Biden and this does not bode well for their same attempts with Harris.”

Daily Beast: “It took Fox News no more than an hour after Joe Biden selected Sen. Kamala Harris as his running mate to start dabbling in wild speculation and conspiracy theories about the hidden, nefarious reasons behind the pick.”

“In the day after the ex-veep and presumptive Democratic nominee announced his running mate, Fox News hosts pushed a number of unsupported theories largely centered around two themes: Harris forced her way onto the ticket and intends to usurp or overtaken Biden; and/or Biden is not mentally capable of selecting his own running mate, and so Harris was installed by a shadowy, unseen puppeteer.”

Rep. Adam Kinzinger (R-IL) tweeted that QAnon has “no place in Congress,” a day after Marjorie Taylor Greene (R), a QAnon conspiracy theorist, won the Republican nomination in a Georgia congressional runoff.

Playbook on President Trump congratulating Marjorie Taylor Greene (R), a QAnon conspiracy theorist, on her GOP primary victory last night and almost certain victory in the general election: “Privately, Republicans have said they’re ashamed of this but don’t believe there’s anything they can do about it. Of course, they’re wrong — they can spend money to defeat people who espouse beliefs contrary to theirs, but they have decided not to.”

Thomas Gilmer (R) holds a slim lead in the Republican primary in Connecticut’s second congressional district even though he dropped out of the race after being arrested on Monday for a violent altercation with a former girlfriend, the Hartford Courant reports.

Carly Fiorina said she disagrees with Sen. Kamala Harris “on many things,” but added “setting aside those disagreements as a woman, I think it is high time that we see a ferociously self-determined, highly accomplished, thoroughly prepared woman of color at the top of the national ticket,” The Hill reports.

She added: “And I think regardless of people’s political persuasions, I think honestly it just reminds us that diversity and possibility are the core of what makes this nation great.”