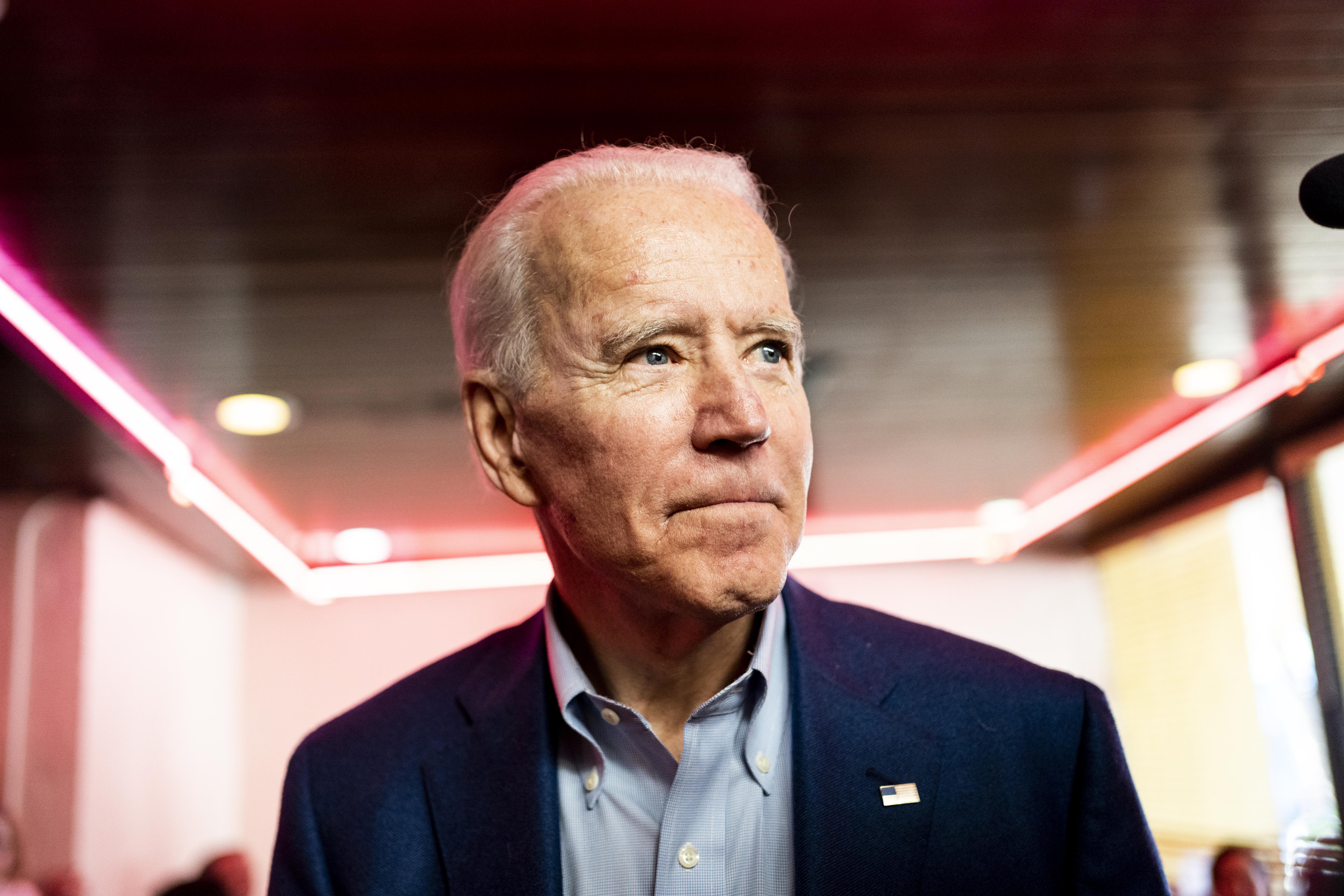 Said pollster Patrick Murray: “Trump has stopped his slide in the poll, but Biden maintains a lead among all registered voters nationally.”

Key finding: “Just over 1 in 5 registered voters (22%) do not have a favorable opinion of either candidate. Biden is the preferred presidential choice among this group by 55% to 17%.”

A new Georgetown University Battleground poll finds 72% of Americans feel things in the country are on the wrong track, while just 22% think they’re on the right track.

In the presidential race, Joe Biden leads Donald Trump statewide, 44% to 36%, and just edges him in the swing second congressional district, 39% to 38%.

Joe Biden “is expected to reveal his running mate as soon as today, though senior Democrats believe the announcement is likelier to be on Wednesday or Thursday,” the New York Times reports.

“His selection will kick off a newly intense phase of the presidential race, giving a jolt of energy to the Democrat’s candidacy as he and his party prepare for their convention next week.”

Washington Post: The best argument for and against each Biden VP pick.

“With Joe Biden’s long-awaited decision on a running mate set to be revealed this week, his campaign has assembled a veteran roster of strategists to help navigate the crucible of a fall campaign,” NBC News reports.

“The team includes a pair of trusted Biden veterans who played key roles during his time in the White House and are familiar with the value and potential pitfalls of being a supporting player on the presidential ticket.”

Playbook: “Kamala Harris world is feeling good: There’s a lot of guessing games out there, but the buzz has intensified around Harris. … Several top Harris donors and close allies have been sending strong signals to reporters — and some creative emojis — that they believe she’ll be Biden’s pick.”

“There was still buzz around Susan Rice, too, with whom Biden has a long working relationship and who has vast experience in the White House — including having a hand in handling a pandemic.”

“If I don’t win the election, China will own the United States. You’re going to have to learn to speak Chinese, you want to know the truth.” — President Trump, in an interview with Hugh Hewitt.

Andrew Yang was disappointed at the roster of speakers for the Democratic convention: “I’ve got to be honest I kind of expected to speak.” Other Democratic presidential candidates not making the cut: Tom Steyer and Michael Bloomberg.

“Democrats announced the lineup of speakers at next week’s Democratic National Convention, and all the usual suspects are included — former President Barack Obama, Sen. Bernie Sanders, and several ex-presidential candidates, like Sens. Kamala Harris and Elizabeth Warren,” The Week reports.

“But there’s one name missing from the list that has pundits in a tizzy: Susan Rice, the Obama-era diplomat who is reportedly a top pick for vice president.”

There is a space for the VP Pick, with Harris and Duckworth also scheduled to speak. So of course, people are assuming that Rice is the pick, but remember, schedules can be changed. Indeed, if Rice is not picked, it is not likely she would be scheduled to speak. On the flip side, if Harris or Duckworth are not picked, they are still likely to speak since they are party luminaries in their own right.

Madison Cawthorn (R), the 25-year-old who beat his Trump-backed primary opponent in North Carolina’s 11th congressional district in June, has deleted nine Instagram photos in which he appeared to celebrate a trip to Adolph Hitler’s Nazi retreat, the Jewish Telegraphic Agency reports.

Cawthorn also refers to Hitler as the “Führer,” a term of reverence, in captions he made to the photos.

And then the news gets worse for the young Nazi admirer. Cawthorn has suggested that an accident upended his plans to join the Navy — but he was actually rejected from the Naval Academy before the accident, Jezebel reports.

Also relevant to an earlier story about Cawthorn deleting photos from Hitler’s retreat: His real estate firm uses the acronym SPQR and he has two Betsy Ross flags displayed in his house — both have been associated with white nationalists.

“In many ways, the pandemic has proven to the country that politics really matters and who gets elected really matters in ways that few other events of our lifetimes have done.” — GOP pollster Whit Ayres, quoted by the Washington Post.

“The order also allows county clerks to prepare, but not open, any ballots that are received before election day. The governor says that will help poll workers tally votes faster on election day.”

The late ballots, which now can’t be legally counted despite being postmarked five days before the primary, could have been enough to change the outcome of one Democratic primary for the Macomb County Commission that was narrowly decided by 87 votes.

Jamelle Bouie: “If Trump is leading on election night, in other words, there’s a good chance he’ll try to disrupt and delegitimize the counting process. That way, if Joe Biden pulls ahead in the days (or weeks) after voting ends — if we experience a ‘blue shift’ like the one in 2018, in which the Democratic majority in the House grew as votes came in — the president will have given himself grounds to reject the outcome as ‘fake news.’”

“The only way to prevent this scenario, or at least, rob it of the oxygen it needs to burn, is to deliver an election night lead to Biden. This means voting in person. No, not everyone will be able to do that. But if you plan to vote against Trump and can take appropriate precautions, then some kind of hand delivery — going to the polls or bringing your mail-in ballot to a “drop box” — will be the best way to protect your vote from the president’s concerted attempt to undermine the election for his benefit.”

Kanye West’s campaign “is arguing he belongs on the presidential ballot in Wisconsin even if his campaign turned in his nomination signatures 14 seconds after the 5 p.m. deadline Aug. 4,” the Milwaukee Journal Sentinelreports.

“The 23-page document, filed Monday, says a state Elections Commission staffer told a West campaign aide that [his lawyer] turned in the nomination papers 14 seconds after the deadline. State law says the papers had to have been filed by “not later” than 5 p.m.”

“Alexandria Ocasio-Cortez survived her primary. Rashida Tlaib did, too. Now it’s Ilhan Omar’s turn on Tuesday — and the Minnesota congresswoman faces the stiffest challenge of any member of the Squad,” Politico reports.

“Omar (D-MN), one of the group’s four liberal women of color who were first elected in 2018, has drawn national attention with her repeated clashes with President Trump — as well as accusations of using anti-Semitic tropes in articulating her position on Israel. Now, her opponent is trying to turn that notoriety into a liability, saying it’s come at the expense of the needs of her Minneapolis district.”

“Bankrolled by pro-Israel donors, Antone Melton-Meaux has spent more than twice as much as Omar on television ads, and outside groups have kicked in to increase his advantage.”

“President Trump has a ready solution for almost any crisis: more Donald Trump. In a template forged in his 2016 convention speech when he declared that ‘I alone can fix it,’ the president has repeatedly put himself forth as the answer, injecting himself into controversies and refusing to cede the spotlight. And that has only accelerated as he barrels toward Election Day,” the AP reports.

“He resumed the coronavirus task force briefings and, against the advice of some aides, sidelined the public health officials in favor of standing solo on stage. He has bet heavily that his one-on-one debates with Joe Biden will be his best chance to overcome his deficit in the polls.”

Tim Miller: “The first put the second guy’s dad in jail and made the third guy the fall man for their joint corruption. The fourth guy was kept out of the White House over a hooker scandal.”

Ron Brownstein: “Though Republican nominees have won the popular vote only once in the five presidential elections since 2000, the GOP has controlled the White House for 12 of the 20 years since then. Similarly, Republicans have controlled the Senate more than half the time since 2000 even though GOP senators, when attributing half of each state’s population to each senator, have never represented more people than their Democratic colleagues.”

“The American political system has long contained features designed to constrain the ability of majorities to impose their will — what John Adams, among other founders, called ‘the tyranny of the majority.’ But the current situation is unusual in that it has consistently empowered a minority to drive the nation’s agenda.”

Thomas Gilmer (R), the Republican party’s endorsed candidate in Connecticut’s congressional 2nd congressional district, dropped out of the race early this morning — just hours before polls opened for the state’s primary — after he was arrested over a violent encounter with an a former girlfriend, the Hartford Courant reports.