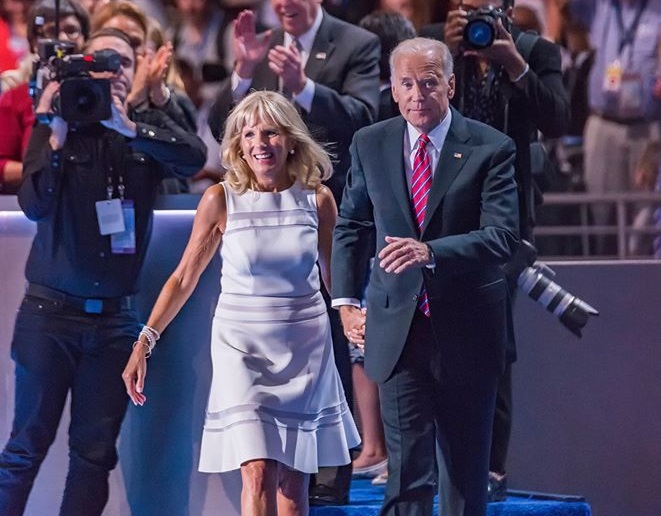 Two new CBS News/YouGov polls find former Vice President Joe Biden leading the disgraced and imcompetent Trump 49% to 43% in Pennsylvania and by 48% to 42% in Wisconsin.

Since capturing the Democratic nomination, Biden’s lead has been remarkably stable. He’s been at or around 50% since early March. His topline support has barely budged.

In fact, Biden’s lead has only grown over this time because Trump’s support has faded. In early March, Trump was polling at 45.6% support. Now he’s down to 42.1%.

There are at least three key reasons Biden’s lead is probably stronger than Clinton’s:

Reports that Michigan Gov. Gretchen Whitmer (D) quietly flew to Delaware last weekend to meet with Joe Biden reignited the guessing game about who Biden will pick as his running mate. But as impressive as Whitmer is as a politician — and that she’s from an important swing state — it seems unlikely she’s really on Biden’s short list. Indeed, the deliberate leaking of the meeting seemed designed to be a parting gift from the Biden camp.

“Postmaster General Louis DeJoy unveiled a sweeping overhaul of the nation’s mail service, displacing the two top executives overseeing day-to-day operations, according to a reorganization memo released Friday. The shake-up came as congressional Democrats called for an investigation of DeJoy and the cost-cutting measures that have slowed mail delivery and ensnared ballots in recent primary elections,” the Washington Post reports.

“The reshuffling threatens to heighten tensions between postal officials and lawmakers, who are troubled by delivery delays — the Postal Service banned employees from working overtime and making extra trips to deliver mail — and wary of the Trump administration’s influence on the Postal Service as the coronavirus pandemic rages and November’s election draws near.”

Dan Pfeiffer: “The torrential tempo of news in the Trump era makes it difficult to separate the serious from the silly. A few weeks ago, Trump proposed delaying the election — something he has no ability to do, but fits with a long running progressive fear about Trump canceling the election and ruling for his remaining days. This absurd proposition dominated the political conversation for days.”

“Delaying the election cannot and will not happen. Delaying the mail IS happening and it can help Trump steal the election. In many states, ballots mailed before the election that arrive after it, do not count. If you believe — as Trump clearly does — that Democrats will rely on mail balloting more than Republicans, delaying the mail is a very simple way to steal an election.”

“This is a five alarm fire and we need to respond like the fate our democracy is on the line.”

“This past spring, President Trump began a full-fledged assault on voting by mail, tweeting, retweeting and railing about massive fraud and rigged elections with scant evidence,” Politico reports.

“Then the Republican apparatus got to work backing up the president.”

“In the weeks since, Trump’s campaign and the Republican National Committee have taken to the courts dozens of times as part of a $20 million effort to challenge voting rules, including filing their own lawsuits in several battleground states, including Minnesota, Pennsylvania and Nevada. And around the time Trump started musing about delaying the election last week, aides and outside advisers began scrambling to ponder possible executive actions he could take to curb mail-in voting — everything from directing the postal service to not deliver certain ballots to stopping local officials from counting them after Election Day.”

American Prospect: “The Postal Service has informed states that they’ll need to pay first-class 55-cent postage to mail ballots to voters, rather than the normal 20-cent bulk rate. That nearly triples the per-ballot cost at a time when tens of millions more will be delivered. The rate change would have to go through the Postal Regulatory Commission and, undoubtedly, litigation. But the time frame for that is incredibly short, as ballots go out very soon.”

New York Times: “Word had circulated through the Trump administration that she was ingratiating herself with the president, fueling suspicions that there might have been a discussion about her serving as his running mate in November. Ms. Noem assured Mr. Pence that she wanted to help the ticket however she could, according to an official present. She never stated it directly, but the vice president found her message clear: She was not after his job.”

“There is no indication Mr. Trump wants to replace Mr. Pence. Mr. Trump last month told Fox News that he’s sticking with Mr. Pence, whom he called a ‘friend.’ Yet with polls showing the president trailing Joseph R. Biden Jr., the presumptive Democratic nominee, and Republicans at risk of being shut out of power in Congress, a host of party leaders have begun eyeing the future, maneuvering around a mercurial president.”

New York Times: “Wall Street has fared extraordinarily well under Mr. Trump: deep cuts to taxes, slashed regulations and, until the pandemic hit, record stock prices. But in recent months, dozens of bankers, traders and investors said in interviews, a sense of outrage and exhaustion over Mr. Trump’s chaotic style of governance — accelerated by his poor coronavirus response — had markedly shifted the economic and political calculus in their industry.”

“More and more finance professionals, they say, appear to be sidelining their concerns about Mr. Biden’s age — 77 — and his style. They are surprisingly unperturbed at the likelihood of his raising their taxes and stiffening oversight of their industry. In return, they welcome the more seasoned and methodical presidency they believe he could bring.”

“The stormy once-in-a-lifetime Florida recount battle that polarized the nation in 2000 and left the Supreme Court to decide the presidency may soon look like a high school student council election compared with what could be coming after this November’s election,” the New York Times reports.

“Imagine not just another Florida, but a dozen Floridas. Not just one set of lawsuits but a vast array of them. And instead of two restrained candidates staying out of sight and leaving the fight to surrogates, a sitting president of the United States unleashing ALL CAPS Twitter blasts from the Oval Office while seeking ways to use the power of his office to intervene.”

“The possibility of an ugly November — and perhaps even December and January — has emerged more starkly in recent days as President Trump complains that the election will be rigged and Democrats accuse him of trying to make that a self-fulfilling prophesy.”

Playbook: “A debate has been raging in some corners of Trump world about how to position Biden. Clearly Trump and his campaign have tried to define him as completely out of it and in hiding. But under that construct, practically showing up for a debate will be a win for Biden.”

Politico: “Trump’s allies and political advisers acknowledge the polling on Trump is not great but insist he can overcome the setback. A top Trump campaign official said the campaign was focused on its own internal polls, which the official said shows Trump either matched with or ahead of Biden in the 17 key states the campaign is monitoring. The official declined to offer more specifics.”

Rep. Louie Gohmert (R-TX), “who frequently strode the US Capitol without a mask and last month contracted COVID-19, is postponing a major political fundraiser previously scheduled for next week,” Business Insider reports.

“Donors paying $5,600 to attend ‘Louie’s Birthday Bash BBQ’ in Tyler, Texas, were promised a signed copy of Fox News personality Jeanine Pirro’s book, and a VIP meet-and-greet with Gohmert and an unspecified ‘special gift’ from him.”

Politico: “The Democrats vying to be Joe Biden’s running mate have made the rounds of the Sunday shows. They’ve enlisted surrogates to talk them up to the vetting committee and have been preparing for their one-on-one interviews with Biden himself. But as the vetting process enters its final stage, there’s another lesser-noticed facet to the veepstakes: how much cash the contenders have raised for him, and their ability to juice donations if they’re chosen.”

“Of Biden’s prospective running mates, Sen. Elizabeth Warren has brought in the most money for him, totaling more than $7.7 million combined from a high-dollar event — which she vocally swore off during her own campaign — and a grass-roots event that drew 50,000 participants. She’s also sent multiple emails to her own small-dollar list, as well as his.”

“The new buys, which are spread across 40 media markets, bring Congressional Leadership Fund’s total investment for the cycle to nearly $90 million.”

“President Trump is increasingly trying to run against a Joe Biden of his own making,” the Washington Post reports.

“Rather than look for campaign ammunition in the former vice president’s long track record of politically vulnerable votes and policy proposals, Trump has instead chosen to describe Biden as a godless Marxist bent on destroying the country with a radical agenda that would make Che Guevara blanch.”

“The caricature is one that neither Biden’s critics nor supporters recognize — but it’s one Trump continues to promote.”

Axios: “President Trump is trying to lure Joe Biden into a Walter Mondale trap — attempting to force the Democratic nominee to embrace middle-class tax increases as part of his election strategy.”

“With his Saturday evening executive action to unilaterally rewrite the tax code, Trump again is demonstrating the lengths to which he’ll go to change the conversation — and try to make the election a choice between him and Biden, and not a referendum on him.”

“In Biden’s response, he didn’t take the bait. Instead, he used the White House effort to suspend payroll taxes as a way to double down on his appeal to seniors and cast himself as the defender of Social Security.”

Attorney General William Barr told Fox News that Democrats and the left are trying to tear down U.S. institutions in a pursuit for “total victory.”

He added that Democrats’ push for victory is their “substitute for a religion.”

Projection. Whenever a Republican accuses a Democrat of something, it is a certified fact that the Republican has committed that something themselves.

“On the other hand, the attorney general has legitimate power. From atop the Justice Department, the boss can make a real mark on everything from police reform to racial justice to prosecuting corporate misdeeds.”

Idiocy. It is possible even likely that Biden’s Vice President could be running for President herself in a mere four years, with the incumbency advantage.

” The team agreed to meet at least every 10 days or so between now and the first debate… They resolved to keep the group very small. They may bring in different people based on subject matter expertise, but the group would remain five to six people to limit the potential for leaks.”

“The group did not specifically discuss whether Christie will play Biden in debate rehearsals. But Trump has made private comments indicating Christie is likely to role-play Biden as he did Clinton.”