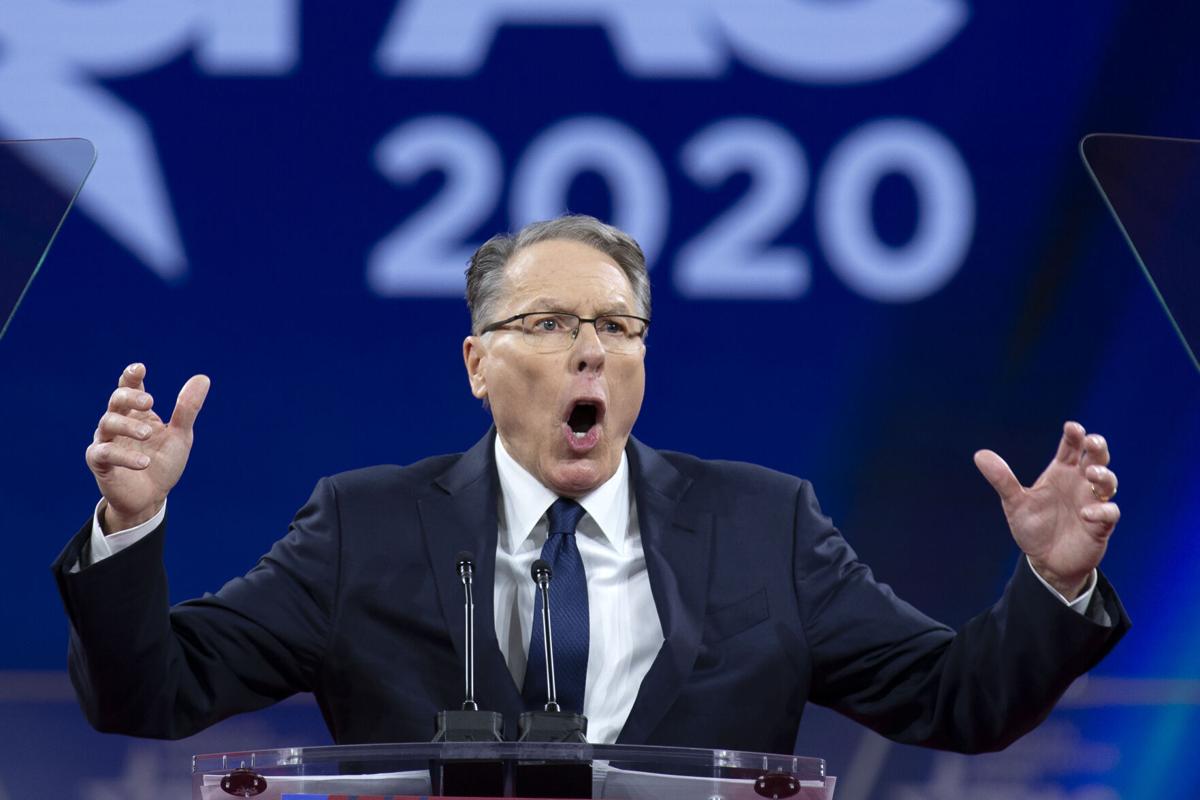 “Attorney General Letitia James claims in a lawsuit filed Thursday that she found financial misconduct in the millions of dollars, and that it contributed to a loss of more than $64 million over a three year period. The suit alleges that top NRA executives misused charitable funds for personal gain, awarded contracts to friends and family members, and provided contracts to former employees to ensure loyalty.”

Talking Points Memo on another lawsuit filed in DC: “District of Columbia Attorney General Karl Racine sued the NRA Foundation on Thursday, alleging that its higher-profile sister organization would loot the charity for funds.

Racine filed the suit against the NRA Foundation, a 501(c)3 charity group, the same day that New York Attorney General Letitia James sought to dissolve the NRA, a non-profit. “The Foundation has allowed itself to be run in a manner that best suits the NRA’s financial interests rather than the Foundation’s charitable purposes,” Racine wrote in the lawsuit.

When the NRA’s well-documented and extravagant spending on its executives, including Ermenegildo Zegna suits and private jet travel, caught up with it, the gun group’s executives began to “raid” the NRA Foundation to keep the money flowing, Racine alleged. “In recent years, the NRA began to experience cash flow problems,” the lawsuit reads. “In order to address its cash flow problems and maintain the lavish expenses of its Executive Director, officers, and ‘consultants,’ the NRA used its control over the Foundation to raid the Foundation’s funds.”

Racine cites a $5 million loan that the Foundation gave the NRA in November 2017, after the gun lobby asked for the cash. The Foundation stipulated repayment after three months, at an interest rate of seven percent. But that didn’t happen, Racine alleged.”

“The New York prosecutors who are seeking President Trump’s tax records have also subpoenaed his longtime lender, a sign that their criminal investigation into Mr. Trump’s business practices is more wide-ranging than previously known,” the New York Times reports.

“The criminal investigation initially appeared to be focused on hush-money payments made in 2016 to two women who have said they had affairs with Mr. Trump.”

“But in a court filing this week, prosecutors with the district attorney’s office cited ‘public reports of possibly extensive and protracted criminal conduct at the Trump Organization’ and suggested that they were also investigating possible crimes involving bank and insurance fraud.”

The Trump administration and Democrats have not agreed to any “top-line numbers” and remain “trillions of dollars apart” on coronavirus stimulus negotiations, Axios reports.

Speaker Nancy Pelosi tore into her Republican colleagues for their approach to negotiating the next coronavirus relief package, telling CNBC: “Perhaps you mistook them for somebody who gives a damn.”

Politico: “Pelosi is where she likes it best — slugging it out with Republicans on another record-breaking coronavirus relief package. Now, even more than during her first go-round as speaker, Pelosi wields more power than anyone in the Capitol, even Senate Majority Leader Mitch McConnell (R-KY). And with Pelosi in firm control of her caucus and Democrats poised to do well in November, there’s no doubt she’ll vie for the speaker’s gavel another, possibly final, time later this year.”

Said Rep. Emanuel Cleaver (D-MO): “Just about anyone can lead during a sunny spring day, with the temperature at 75 degrees, but it takes a gifted person to lead during a hurricane, followed by a rock-sized hailstorm. That’s what has happened.”

“But the California Democrat is also taking a huge risk during the coronavirus aid talks as she remains almost entirely unyielding in her demands — even as negotiations drag on and millions of out-of-work Americans lose their federal aid. Both she and Republicans risk overplaying their hands and ending up with a stalemate that leads to retribution from angry voters in November.”

Politico: “Facing a deeply divided Senate GOP conference just three months before an election that could cost Republicans their majority, McConnell is struggling to hold his members together as the White House and Democratic congressional leaders negotiate a new coronavirus relief package. There are complaints about the plan pushed by McConnell, as well as questions over whether any deal can get done this close to Nov. 3. For the first time in a while, Republicans are questioning McConnell’s choices.”

“With no deal on a coronavirus relief package in sight, most senators are expected to head home Thursday, leaving negotiations up to the White House and party leaders,” Politico reports.

“The Senate is expected to technically stay in session next week but will not hold any votes unless there is a breakthrough in coronavirus negotiations. That means senators — like their House counterparts — will be back home, waiting for word from the leadership whether a deal has been reached.”

President Trump claimed to a small crowd in Ohio that Joe Biden is “against God.” Said Trump: “No religion, no anything, hurt the Bible, hurt… God. He’s against God, he’s against guns.”

Facebook removed a video on President Trump’s page for spreading misinformation about the new coronavirus, NBC News reports. The video showed Trump giving an interview on Fox News where he says children are “almost immune” or “virtually immune” to the new coronavirus as he argues for schools to reopen.

“Brian Hook, the State Department’s special envoy for Iran and one of the few national security officials to survive the turmoil in the foreign policy team through most of President Trump’s term, plans to announce Thursday that he is resigning his post,” the New York Times reports.

“Mr. Hook will be succeeded by Elliott Abrams, a conservative foreign policy veteran and Iran hard-liner who is currently the State Department’s special representative for Venezuela.”

Ohio Gov. Mike DeWine (R) announced that he tested positive but had no symptoms of covid-19, as President Trump traveled to the state, the Cleveland Plain Dealer reports.

“As President Donald Trump hints that he plans to deliver his nomination speech from the White House on Aug. 27, the hotel bearing his name down the street is making a power play of its own: spiking its room rates by more than 60 percent for those convention dates,” the Daily Beastreports.

“Listings for rooms at the Trump International Hotel in D.C., via Hotels.com, show rooms for one adult on the night of the address starting at $795 and running as high as $2,070.”

President Trump said it was possible the United States would have a coronavirus vaccine before the November 3 election, a more optimistic forecast than timing put forth by his own White House health experts, Reuters reports.

“President Trump agreed to continue paying for the full cost of National Guard troops deployed to help with the coronavirus response in just two states — Texas and Florida — after their Republican governors appealed directly to him,” CNN reports.

“Other states will now have to pay a quarter of the cost of National Guard deployments in their states, despite their governors also requesting the federal government continue to foot the entire bill.”

A White House official said Trump made an exception for Texas and Florida because their governors — who enjoy close relationships with Trump — made “special, direct cases to the President.”

“You can cease being a party built around tax cuts for the rich and try to develop an economic agenda that will appeal to the middle class. You can try to change the political topic, centering politics on racial, religious, and nationalist grievance. Or you can try to undermine democracy itself.”

New York Times: “First, the United States faced longstanding challenges in confronting a major pandemic. It is a large country at the nexus of the global economy, with a tradition of prioritizing individualism over government restrictions. That tradition is one reason the United States suffers from an unequal health care system that has long produced worse medical outcomes — including higher infant mortality and diabetes rates and lower life expectancy — than in most other rich countries.”

“The second major theme is one that public health experts often find uncomfortable to discuss because many try to steer clear of partisan politics. But many agree that the poor results in the United States stem in substantial measure from the performance of the Trump administration.”

President Trump is still trying to overturn “Obamacare,” but his predecessor’s health care law keeps gaining ground in places where it was once unwelcome, the AP reports.

“Missouri voters this week approved Medicaid expansion by a 53% to 47% margin, making the conservative state the seventh to do so under Trump.”

“That leaves only a dozen states opposed to using the federal-state health program for low-income people as a vehicle for covering more adults, mainly people in jobs that don’t provide health care.”

“A wave of defaults, bankruptcies and evictions expected in cities across the U.S. is poised to remake the retail landscape across the country, but there may be some upside for consumers and small businesses,” Axiosreports.

“Russia continues to use a network of proxy websites to spread pro-Kremlin disinformation and propaganda in the United States and other parts of the West, according to a State Department report released on Wednesday,” the New York Times reports.

“The report is one of the most detailed explanations yet from the Trump administration on how Russia disseminates disinformation, but it largely avoids discussing how Moscow is trying to influence the current campaign.”