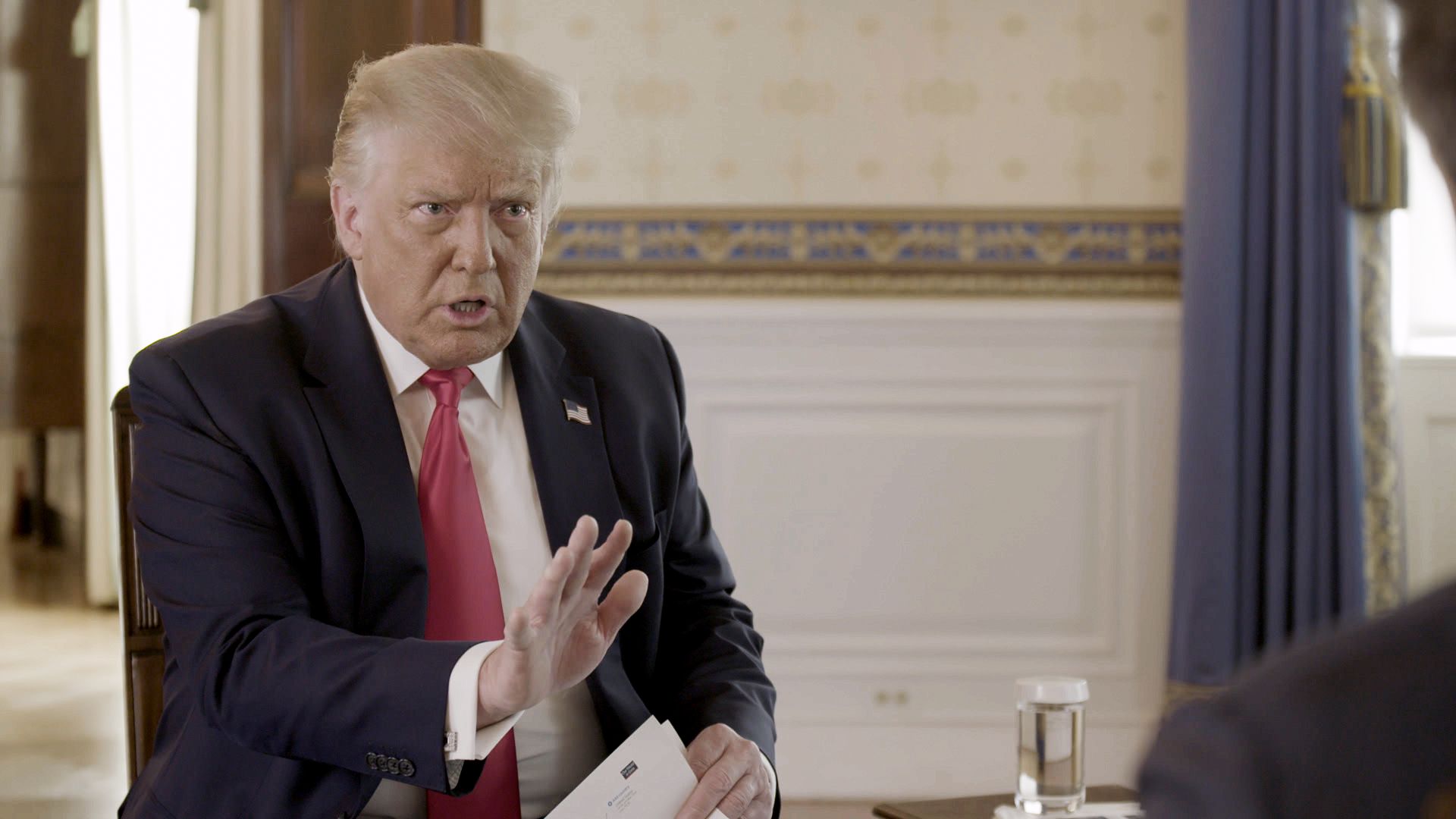 “In the absence of a national testing strategy for the novel coronavirus pandemic, six governors have formed a first-of-its-kind purchasing compact they hope will pressure companies that make rapid-detection tests to quickly ramp up production,” the Washington Post reports.

“The governors, three Republicans and three Democrats, say other states and cities may join them and that talks have already begun with one of the two companies approved by the FDA to sell point-of-care antigen tests that can detect the virus in less than 30 minutes.”

A new NPR/Ipsos poll finds 59% of Americans support a mandatory, nationwide order to shelter at home for two weeks to slow the spread of the coronavirus. About two-thirds of respondents said they believe the U.S. is handling the pandemic worse than other countries.

A new NBC News|SurveyMonkey poll finds 58% of Americans say they don’t trust what President Trump has said about the coronavirus pandemic, while 31% say they do trust him.

First Read: “It’s unsustainable for a democracy — and a world superpower — for a majority of citizens not to trust their president on the deadliest virus to hit the country in 100 years.”

“It’s sometimes hard to determine whether President Trump is being willfully misleading or if he truly believes what he’s saying. But an astonishing interview clip from Axios appears to show that Trump has genuinely managed to convince himself that his response to the coronavirus pandemic has been effective—because he only considers partial and deceptively flattering statistics to be true,” the Daily Beast reports.

“Brandishing childishly simplistic, brightly colored COVID-19 graphs presumably provided to him by aides trying to keep him happy, Trump proudly tells Axios’ Jonathan Swan that the U.S. is ‘lower than the world,’ without elaborating. When Swan looks at the chart, it becomes clear Trump is only considering death as a proportion of coronavirus cases—not as a proportion of population, which shows the U.S. is faring very badly.”

President Trump suggested to Axios that Jeffrey Epstein might have been killed in prison, instead of committing suicide, which is the official explanation. Said Trump, when asked about Epstein confidant Gislaine Maxwell: “Her friend or boyfriend was either killed or committed suicide in jail.” He added: “Her boyfriend died in jail and people are still trying to figure out how did it happen. Was it suicide? Was he killed?”

President Trump declined to tell Axios whether he found the late Rep. John Lewis’s (D-GA) life “impressive” when asked how history would remember him. Said Trump: “I don’t know. I don’t know John Lewis. He chose not to come to my inauguration. I never met John Lewis, actually, I don’t believe.” He added: “I find a lot of people impressive. I find many people not impressive.”

President Trump pronounced Yosemite as ‘yo-Semites’ at a White House event this morning.

“Treasury Secretary Steven Mnuchin told Senate Republicans that negotiators are no closer to a coronavirus relief deal than they were last week, blaming Democratic leadership for the continuing stalemate,” The Hill reports.

Meanwhile, Politico reports the White House is considering a trio of executive orders aimed at shaking up negotiations with Democrats.

“The three actions under consideration would delay the collection of federal payroll taxes, reinstitute an expired eviction moratorium, and in the riskiest gambit of them all, extend enhanced federal unemployment benefits using unspent money already appropriated by Congress.”

Playbook: “Here’s an amazing factoid: almost two weeks into the talks aimed at producing a Covid relief bill: The two sides have not resolved a single issue. Let us say this another way: Speaker Nancy Pelosi and Senate Minority Leader Chuck Schumer have not come to complete agreement on anything with White House chief of staff Mark Meadows and Treasury Secretary Steven Mnuchin.”

“There’s an axiom in legislative politics that we oftentimes chuckle about: Nothing’s agreed to until everything is agreed to. That’s fair.”

“In this case, nothing is agreed to because many of the main power centers have been unbending in these talks, and are particularly convinced of the wisdom of their arguments and positions.”

“The Securities and Exchange Commission is investigating the circumstances around Eastman Kodak’s announcement of a $765 million government loan to make drugs at its U.S. factories,” the Wall Street Journal reports.

“News of the loan last week caused Kodak’s shares to rise as high as $60, before falling to about $15 on Monday due to a dilution in the shares. Amid the heightened volatility, trading volume has surged. The price spike briefly produced a potential windfall for company executives who owned stock-option grants, some of which were granted on July 27, the day before the loan became public.”

President Trump’s nominee for U.S. ambassador to Germany has a history of making xenophobic and racist comments about immigrants and refugees, CNN reports.

Retired Army Col. Douglas Macgregor, a decorated combat veteran, author and frequent guest on Fox News, claimed that Muslim migrants were coming to Europe “with the goal of eventually turning Europe into an Islamic state.”

He criticized Germany for giving “millions of unwanted Muslim invaders” welfare benefits rather than providing more funding for its armed services.

U.S. federal prosecutors have produced no evidence linking dozens of people arrested in anti-racism protests in Portland, Oregon, to the antifa or anarchist movements, despite President Trump’s assertions they are fueling the unrest, Reuters reports.

“The Census Bureau is ending all counting efforts for the 2020 census on Sept. 30, a month shorter than previously announced,” NPR reports. “That includes critical door-knocking efforts and collecting responses online, over the phone and by mail.”

The New Yorker interviews Stuart Stevens, author of It Was All a Lie: How the Republican Party Became Donald Trump.

Said Stevens: “I think I wanted to believe for a long time that when Donald Trump came along he was hijacking the Party. A lot of people were wrong about Trump in 2016, but it’s hard to find somebody more wrong than I was. I predicted he wouldn’t win the primary, and I predicted he wouldn’t win the general election. In retrospect, a lot of that was that I didn’t want to believe it.”

“He says he has ninety-five per cent Republican approval, and that’s probably an exaggeration, but let’s say it is eighty-nine per cent or so. You look at what Trump is saying, and the degree to which the Party is comfortable with it, and I don’t know what conclusion to come to other than that Trump very well suits the Republican Party.”

George Conway: “Trump’s sanction must come at the polls, and beyond. For the sake of our constitutional republic, he must lose, and lose badly. Yet that should be just a start: We should only honor former presidents who uphold and sustain our nation’s enduring democratic values. There should be no schools, bridges or statues devoted to Trump. His name should live in infamy, and he should be remembered, if at all, for precisely what he was — not a president, but a blundering cheat.”

Iran’s supreme leader, Ayatollah Ali Khamenei, has said in a televised address that Iran will expand its nuclear program and will not negotiate with the United States, doubling down on his defiance of the Trump administration’s “maximum pressure” policy, the New York Times reports.

“A controversial Trump administration pick for a top Pentagon post, retired Army Brig. Gen. Anthony Tata, has been placed into a senior role days after his nomination hearing was canceled amid bipartisan opposition to his nomination,” CNN reports.

“Weak environmental protections, safety rules and labor and civil rights protections may be cutting lives short in conservative states and deepening the divide between red and blue states,” the Los Angeles Times reports.

“Since the mid-1980s, the gap among U.S. states in how long their residents live has widened, reversing decades of progress toward greater equality.”

Said Barbot: “I leave my post today with deep disappointment that during the most critical public health crisis in our lifetime, that the Health Department’s incomparable disease control expertise was not used to the degree it could have been Our experts are world renowned for their epidemiology, surveillance and response work. The city would be well served by having them at the strategic center of the response not in the background.”

Liberty University President Jerry Falwell Jr. posted — and then apparently deleted — a bizarre Instagram post in which he appeared with his shirt hiked up and his pants unzipped, standing next to a woman identified as a “friend,” Relevant Magazine reports.

In the caption, Falwell wrote the drink he was holding was “just black water” and a “prop only.”