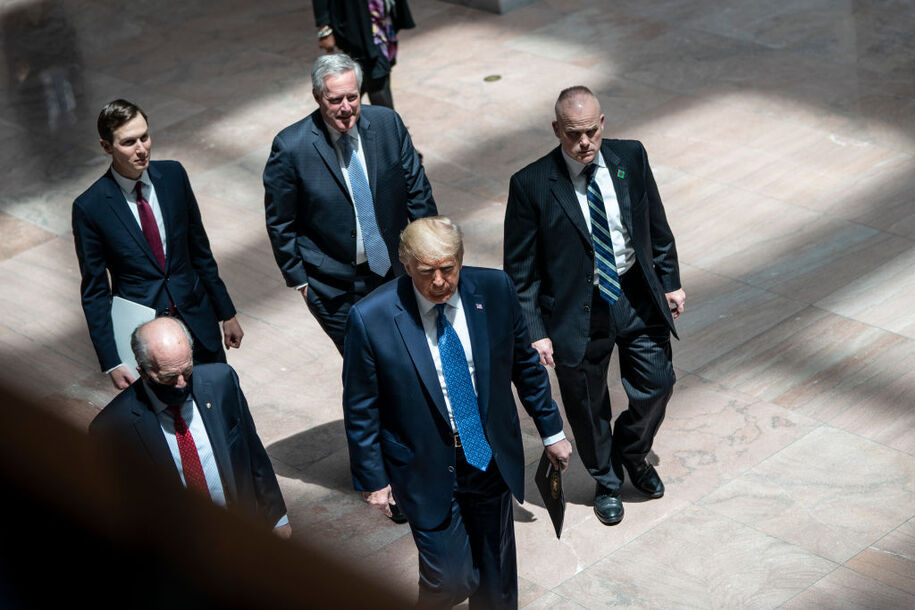 Dr. Deborah Birx said the US is in a new phase in its fight against the coronavirus pandemic, saying that the deadly virus is more widespread than when it first took hold in the US earlier this year, CNN reports.

Said Birx: “What we are seeing today is different from March and April. It is extraordinarily widespread. It’s into the rural as equal urban areas.”

She added: “To everybody who lives in a rural area, you are not immune or protected from this virus. If you’re in multi-generational households, and there’s an outbreak in your rural area or in your city, you need to really consider wearing a mask at home, assuming that you’re positive, if you have individuals in your households with comorbidities.”

Washington Post: “When asked directly, the Trump campaign refused to say whether it had accepted materials related to Biden from any foreign nationals. Trump was impeached last year after being caught pressuring Ukrainian leaders to produce damaging information about work Biden’s son did in the country, even though repeated allegations of corruption against the Bidens have been widely discredited.”

“A Biden spokesman said ‘absolutely not’ when asked if the campaign had received any materials from foreign actors.”

President Trump met with UC Berkeley law professor John Yoo at the White House on Thursday, the Las Vegas Review-Journal has learned — the first face-to-face meeting between the president and his new legal guru and author of a piece that argues a recent Supreme Court ruling can help Trump enact new policies without congressional action.

Said Yoo: “He was upbeat and energetic.”

“Yoo said he would not reveal the content of their conversation, but did offer that the man who greeted him was not ‘Nixonian in the bunker and paranoid and dark. I didn’t see that.’”

Speaker Pelosi confirmed to ABC News reports she slammed Dr. Deborah Birx in a closed-door meeting. Said Pelosi: “I think the president is spreading disinformation about the virus, and she is his appointee, so I don’t have confidence there, no.”

“The coronavirus is spreading at dangerous levels across much of the United States, and public health experts are demanding a dramatic reset in the national response, one that recognizes that the crisis is intensifying and that current piecemeal strategies aren’t working,” the Washington Post reports.

“This is a new phase of the pandemic, one no longer built around local or regional clusters and hot spots. It comes at an unnerving moment in which the economy suffered its worst collapse since the Great Depression, schools are rapidly canceling plans for in-person instruction and Congress has failed to pass a new emergency relief package. President Trump continues to promote fringe science, the daily death toll keeps climbing and the human cost of the virus in America has just passed 150,000 lives.”

The White House has no plans to try to delay the Nov. 3 election, Chief of Staff Mark Meadows said Sunday, even as he defended a tweet from President Trump that raised the possibility, the Washington Post reports.

Said Meadows: “We’re going to hold an election on November 3rd, and the president is going to win.”

“Eastman Kodak on Monday granted its executive chairman options for 1.75 million shares as the result of what a person familiar with the arrangement described as an ‘understanding’ with its board that had previously neither been listed in his employment contract nor made public,” CNBC reports.

“One day later, the administration of President Trump announced a $765 million financing deal with Eastman Kodak, and in the days that followed the stock soared, making those additional options now held by executive chairman Jim Continenza worth tens of millions.”

“Deutsche Bank has opened an internal investigation into the longtime personal banker of President Trump and his son-in-law, Jared Kushner, over a 2013 real estate transaction between the banker and a company part-owned by Mr. Kushner,” the New York Times reports.

“Typically banks restrict employees from doing personal business with clients because of the potential for conflicts between the employees’ interests and those of the bank.”

“The decision will be based upon three things and three things only: vetting, polling and, as Joe Biden would put it, who’s ‘simpatico’ with him.” — Rep. Jim Clyburn (D-SC), quoted by Axios, on Joe Biden’s search for a running mate.

“I feel very strongly that this man has taken on strongarm tactics. And I feel very strongly that he is Mussolini, Putin is Hitler. … I don’t think he plans to leave the White House. He doesn’t plan to have fair and unfettered elections. I believe that he plans to install himself in some kind of emergency way to continue to hold onto office. And that’s why the American people had better wake up.” — House Majority Whip Jim Clyburn (D-SC), quoted by Politico, on President Trump.

New York Times: “Millions of dollars of American taxpayer money have flowed to China from the $660 billion Paycheck Protection Program that was created in March to be a lifeline for struggling small businesses in the United States. But because the economic relief legislation allowed American subsidiaries of foreign firms to receive the loans, a substantial chunk of the money went to America’s biggest economic rival, a new analysis shows.”

“Many of the loans were quite sizable; at least 32 Chinese companies received loans worth more than $1 million, with those totaling as much as $180 million.”

Jonathan Swan: “After pausing their multimillion-dollar advertising campaign to review their strategy, the Trump campaign plans to launch new ads on Monday depicting Joe Biden as a puppet ‘controlled by the radical left,’ according to two senior campaign officials.”

“The Trump campaign’s most recent internal polls show the ‘puppet of the left’ attack on Biden is beginning to resonate with voters… And it sets the campaign up to attack Biden’s vice presidential selection.”

“Team Trump is trying to persuade voters that if they vote for Biden, they’re not actually electing this amiable, moderate old man. The only way they believe they can sufficiently toxify Biden is to convince voters that he’s an empty vessel to be filled by the policies of the ‘radical left.’”