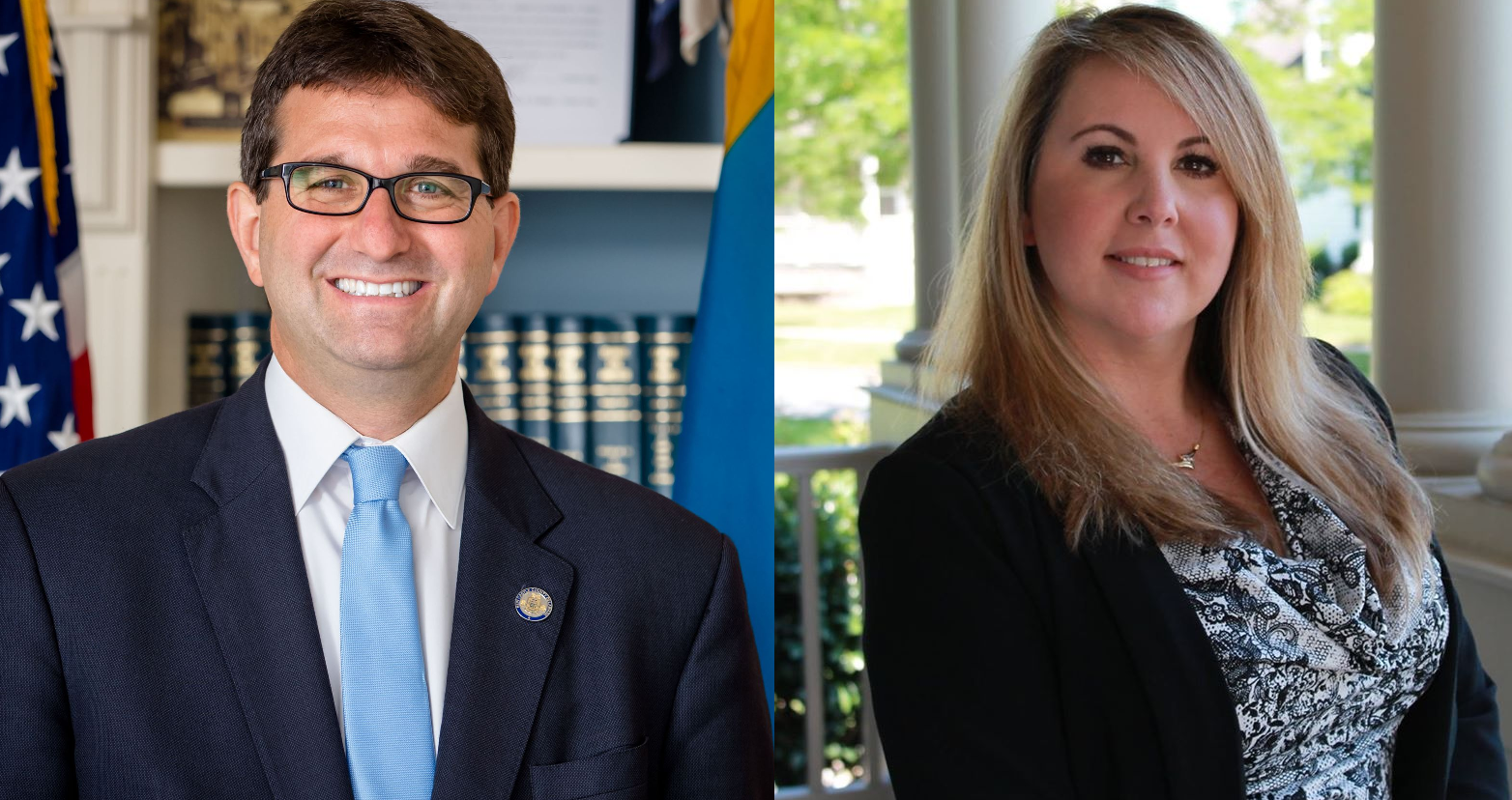 Delaware’s Fraternal Order of Police has been too busy resisting any and all attempts to reform policing in Delaware and hold violent police officers accountable to get that heavily involved in political campaigns yet this year, but we do know they have their candidate for New Castle County Executive.

FOP Lodge 5, which represents the New Castle County Police, had a falling out with County Executive Matt Meyer, who, unlike the last County Executive, refused to pander to them and cave into all of their ludicrous demands. As such, with the help of the State FOP, FOP Lodge 5 went on the hunt to recruit a candidate to run against Meyer. And that’s how they found Maggie Jones, who last tested the political waters when she was one of 6 candidates to compete for the nomination for the 10th Senate District seat after Lt. Governor Bethany Hall Long vacated the seat in 2017. Jones was all too happy to accept their support. Support she should have thought twice about accepting in this current political environment.

So what makes the Delaware FOP and FOP Lodge 5 so awful? A scan of their social media easily reveals their reprehensible views which should revolt any Democratic voter with a sound mind.

First of all, they enthusiastically support Trump. They endorsed him and they’ve made numerous posts adoring him and fawning over him, as well as criticizing impeachment proceedings against him. Meanwhile, they’ve bashed Democrats like President Obama, Hillary Clinton, and Bernie Sanders. 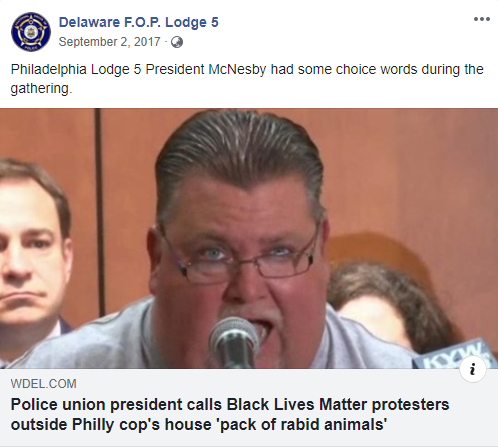 They also made several posts that furiously protested the firing of Daniel Pantaleo, the NYPD officer who murdered Eric Garner. Apparently, they believe that officers who suffocate unarmed black men should be able to keep their jobs.

The FOP’s support for police officer violence and shielding bad officers has had clearly fatal consequences. In 2013, Dover PD officer Thomas Webster was caught on camera viciously kicking an unarmed black man in the face and breaking his jaw while he defenselessly laid face down on the ground. Fred Calhoun, the President of the State FOP (who recently sponsored and spoke at Maggie Jones’ fundraiser) rushed to the officer’s defense and fiercely opposed attempts to discipline or prosecute him. And instead of ending up in prison where he belonged, Officer Webster got a new job with a police agency in Maryland. And within a year on the job, Webster ended up involved in the killing a 19 year-old black man, whom he and three other officers suffocated to death, much in the same way that George Floyd was later suffocated in Minnesota.

More recently, the FOP has supported a violent police response to the George Floyd protests. On June 10, a group held a peaceful protest involving nonviolent civil disobedience in Dover. The Dover Police officers on the scene responded by confronting protestors, escalating tensions, throwing protestors to the ground, roughing them up, injuring them, arresting them, and detaining them while denying them due process rights. In response, the Governor and Attorney General offered some very restrained and sensible criticism of the Dover PD’s actions.

In reaction to these mild critiques, the FOP blew up and posted a furious letter on Facebook, declaring that “Law enforcement is under attack” and that the Governor and the Attorney General “stand against us today because we wear the badge.” Spare me.

As you can see in this screenshot, Maggie Jones liked that post, indicating her agreement with the contents of the post. Indeed, if you think the county police have been too soft on peaceful protesters, and you think they should be manhandling protestors, throwing them to the ground, injuring them, and arresting them- then by all means, Maggie Jones seems to be your candidate. I am sure she would be be happy to encourage that kind of behavior. Or at the very least, not in any way criticize it or punish those responsible for it.

So, you can see why the FOP like Maggie Jones. But why do they hate Meyer? Well, first off, County Executive Matthew Meyer very publicly and proudly supports Black Lives Matter. So of course, they really don’t like that.

Secondly, the FOP demanded enormous police officer pay increases from Meyer, including raises of up to 20% but only for senior officials already making 6-digit salaries. When Meyer responded that the county could not afford that, they demanded that he cut library funding in order to pay police officers more. Meyer wanted to keep library funding the way it was, so he told them no. 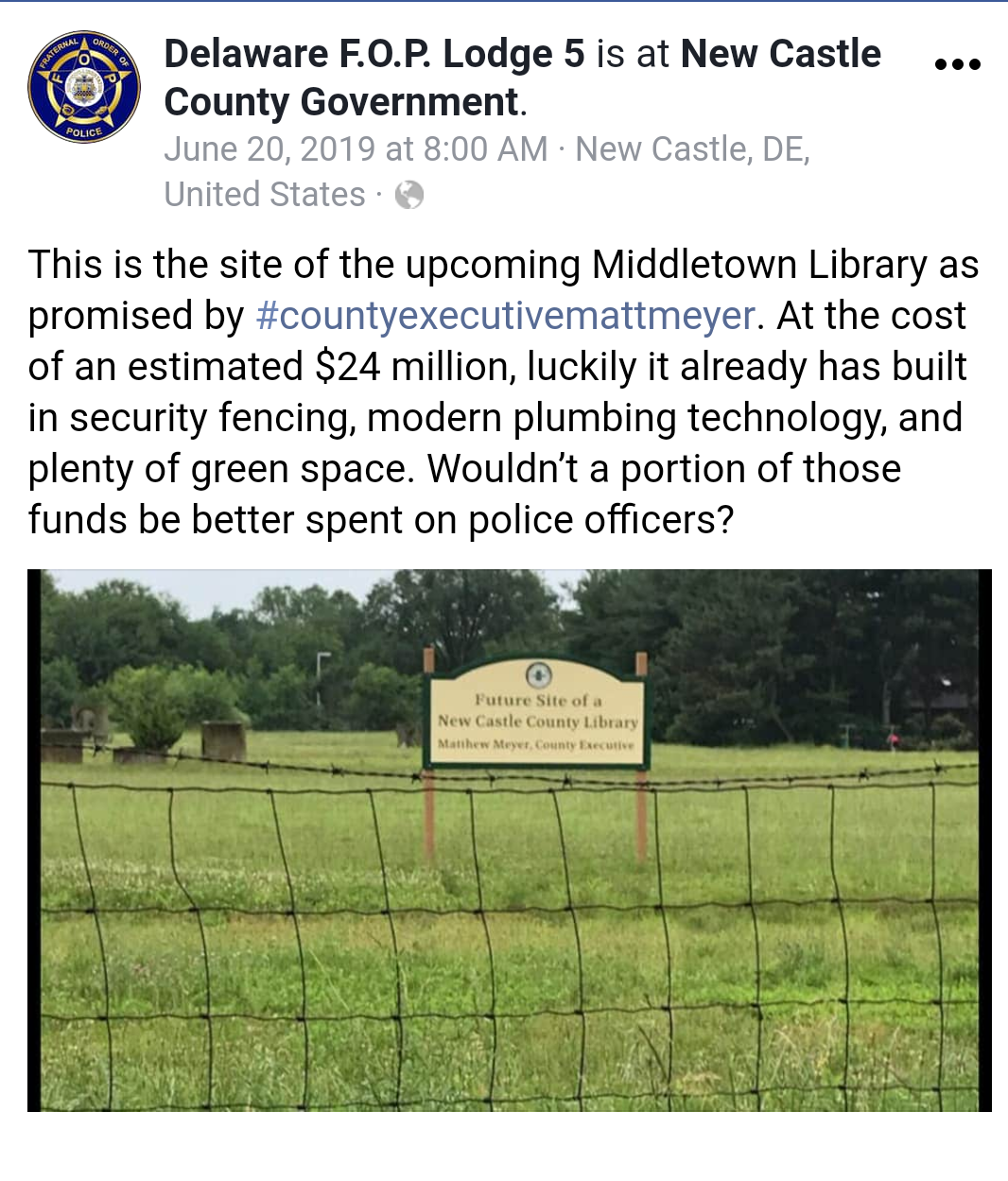 Thirdly, when Meyer took office in 2017, he took a hard line on sexual harassment and got to work sniffing out and eliminating sexual harassment in county governmement. As it turns out, there had been sexual harassment in the NCCPD for decades, and the FOP leadership knew about it and did nothing. They maintained the blue wall of silence- not wanting to get another officer in trouble- so they turned a blind eye and let it happen. Then, when Meyer at long last exposed all this, instead of accepting blame for their role in perpetuating it, the FOP bizarrely turned around and blamed Meyer for the harassment. Even though he was the one who exposed it, and all of the harassment happened before he was in office. So the FOP is trying to make Meyer a scapegoat for their own failures, though it takes a whole lot of mental gymnastics to pin blame on him for something that happened before his administration. Go figure.

Finally, Meyer has been outspoken about changing Delaware’s Law Enforcement Officer’s Bill of Rights, which keeps police misconduct in Delaware a secret. The FOP actually wrote that law back in 1985, and they adamantly want to keep it just the way it is and are furious that people like Meyer want to change it. Because of this law, the public has no idea how many police officers in Delaware have been accused of brutality and excessive force. There could be Derek Chauvins among us, violent officers policing the streets of Delaware, and we would have no idea about it. Thanks, FOP.

The FOP’s enthusiastic support for Maggie Jones is more than enough reason not to vote for her. With Maggie, you’ll get an FOP puppet who will cut library and parks funding to give big bonuses to police, oppose policing reform, keep police misconduct secret, and give officers a blank check to use force as they please, even against defenseless, unarmed people and peaceful protestors. Reelecting Matthew Meyer continues New Castle County on a path away from the Tom Gordon police states of yesteryear.

45 comments on “Pro-Trump, Anti-BLM FOP have their candidate for County Executive”