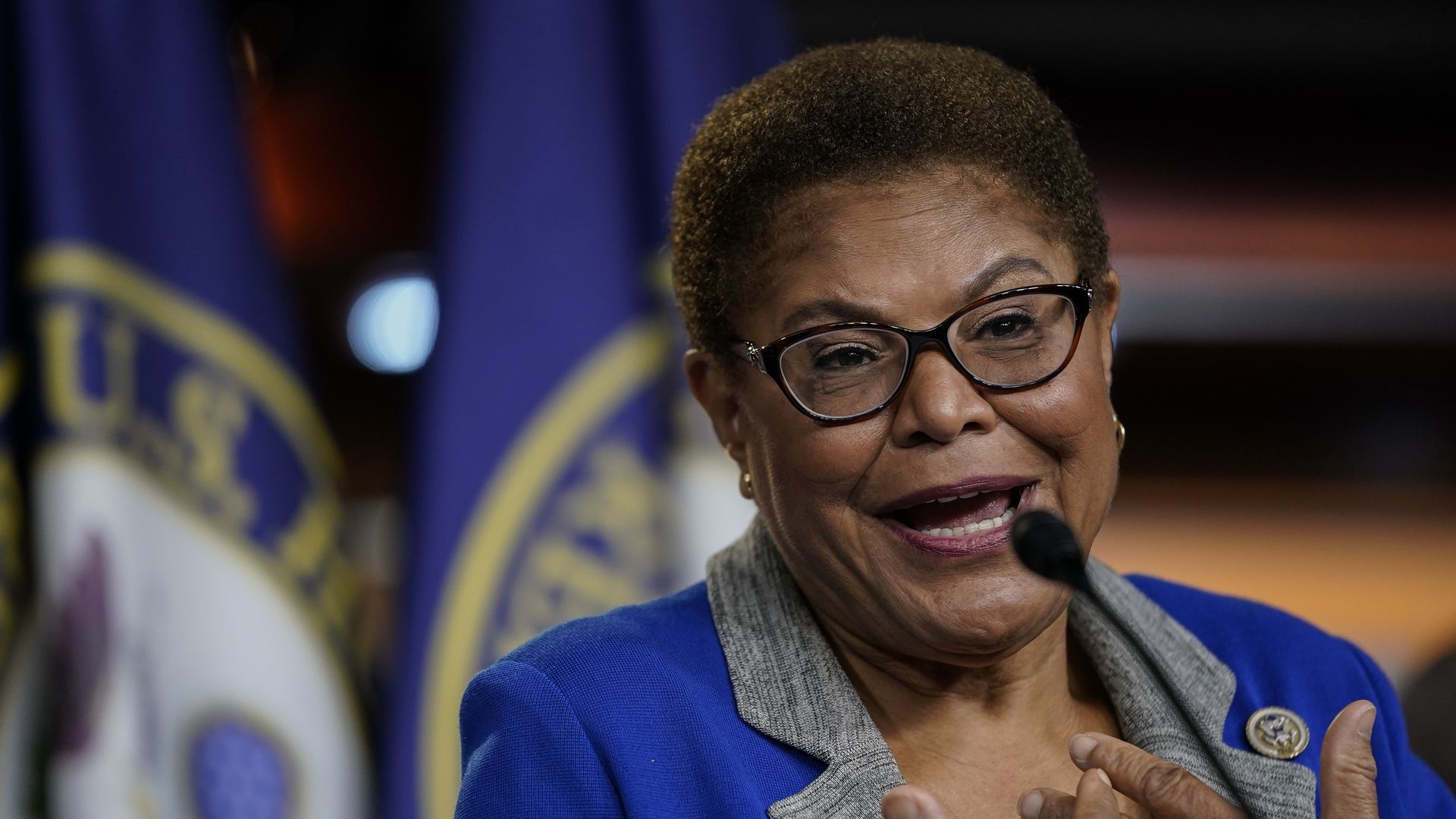 Rep. Karen Bass (D-CA), a leading contender to be Joe Biden’s running mate, heaped praise on the Church of Scientology at a 2010 ribbon-cutting ceremony for a Los Angeles facility, the Daily Caller reports. Scientology is a criminal cult that kidnaps families and stalks anyone who threatens it. Bass’ praise of it ends her political career forever. She should not only be disqualified from the VP race, she should resign Congress.

“Joe Biden has entered the final stage of his deliberations about choosing a running mate as he prepares to talk one-on-one with the finalists next week, while Democratic leaders lobby him furiously to elevate their allies and sink their enemies,” the New York Times reports.

“Two candidates who received scant attention early in the process are now among the leading contenders: Rep. Karen Bass of California and Susan Rice, the former national security adviser… Ms. Bass in particular has moved rapidly toward the top of Mr. Biden’s list amid an intensive lobbying drive by her fellow House Democrats, and has impressed the former vice-president’s search committee.” They better become unimpressed right quick.

“The vote to renominate President Donald Trump is set to be conducted in private later this month, without members of the press present, a spokeswoman for the Republican National Convention, citing the coronavirus,” the AP reports.

“While Trump called off the public components of the convention in Florida last month, citing spiking cases of the virus across the country, 336 delegates are scheduled to gather in Charlotte, North Carolina, on Aug. 24 to formally vote to make Trump the GOP standard-bearer once more.”

“Should former Vice President Joe Biden win the White House in November, America will likely be in for a foreign policy about-face as Biden reverses, dismantles or severely curtails many of President Trump’s most significant and boldest actions,” the AP reports.

“From the Middle East to Asia, Latin America to Africa and, particularly, Europe, and on issues including trade, terrorism, arms control and immigration, the presumptive Democratic nominee and his advisers have vowed to unleash a tsunami of change in how the U.S. handles itself in the international arena.”

“With few exceptions, Americans could expect Biden to re-engage with traditional allies.”

Joe Biden’s campaign contends that President Trump’s talk of delaying November’s election is an effort to distract, and vows to be what a Biden aide called “laser-focused” on Trump’s pandemic response, Axios reports.

CNN: “In an attempt to boost his mood, Trump’s advisers scrambled to assemble a scaled-down political event on a baking Florida tarmac on Friday, where Trump addressed a mostly mask-less crowd standing inches from one another. Other events in the state that Trump had scheduled for Saturday were canceled as a storm approached.”

“The event illustrated what White House officials describe as an ad-hoc effort to schedule appearances for Trump that allow him to bask in at least some adulation as his campaign rallies remain on hold and after an in-person convention acceptance speech was scuttled.”

“White House officials are still weighing their options for how Trump will formally accept the nomination, including assessing sites around the country where he might deliver a prime-time address. Yet the task has proven difficult as Trump insists upon something dramatic while aides work to temper some of his expectations about the scale of the potential venues.”

A new Lincoln Project ad: “Impotus Americanus is one of the heaviest leaders in the animal kingdom, and is famously known to be an orange, ruddy color not found in nature.”

New York Times: “Interviews with more than two dozen party officials, strategists and voters in areas like these help explain what recent polls have found: that Mr. Trump’s strategy is alienating independent and even some conservative voters — particularly women and better-educated Americans — who are turned off by his partisan appeals and disappointed in his leadership. From the suburbs of St. Louis to Omaha to Houston, they expressed deep concern about Mr. Trump’s approach to twin national crises, lamenting his confident declarations that the coronavirus was under control and his move to stoke racial divides after nationwide protests over police brutality against Black Americans.”

“One result is that House Republicans, who began the election cycle hoping to win an uphill battle to recapture their majority — or at the very least, claw back some of the competitive districts they lost to Democrats in 2018 — are instead scrambling to shore up seats that once would have required little effort to hold.”

“Allies of Kamala Harris sought and received a meeting with Joe Biden’s campaign staff this week after a leader of his vice presidential vetting team was quoted doubting whether she’d be a loyal No. 2,” Politicoreports.

“Prominent supporters of the California senator asked for the virtual sit-down on the heels of a Politico report Monday that Harris is not a lock for VP. It quoted former Sen. Chris Dodd, one of four members of the vetting unit, remarking to a prominent Democratic donor that Harris had ‘no remorse’ for attacking Biden during a debate last year.”

“The briefing highlighted the regular clash of views on election security between Trump and the administration’s top officials charged with keeping the November vote secure, both in public and in classified briefings.”

President Trump on Friday continued to deliver warnings of chaos surrounding the use of mail-in ballots in November’s election, predicting that the upcoming general election will be “the greatest election disaster in history,” Politico reports.

Said Trump: “This will be catastrophic for our nation. You’ll see it. I’m always right about things like this. I guess I must be, or I wouldn’t be sitting here.”

A new Yahoo News/YouGov poll finds that 52% of Americans now believe that President Trump will not accept the results of November’s election if he loses to Joe Biden — and an even larger majority of Trump voters say they too will refuse to accept a narrow loss if mail-in ballots contribute to Biden’s victory.

A new Public Policy Polling survey in Minnesota finds Joe Biden leading Donald Trump in the presidential race, 52% to 42%. The Trump campaign has suggested Minnesota might be competitive this year.

Amber Phillips: “A look at recent polling of nine governors — five Republicans and four Democrats from states that are polled frequently because they will likely be determinative in the 2020 election — shows that the governors who instituted face mask requirements, urged social distancing and reopened more slowly than other states have seen a jump in their approval ratings.”

“By contrast, the governors who eschewed public health experts’ advice and reopened quickly — as President Trump urged — have seen their approval ratings drop, by double digits in some cases.”