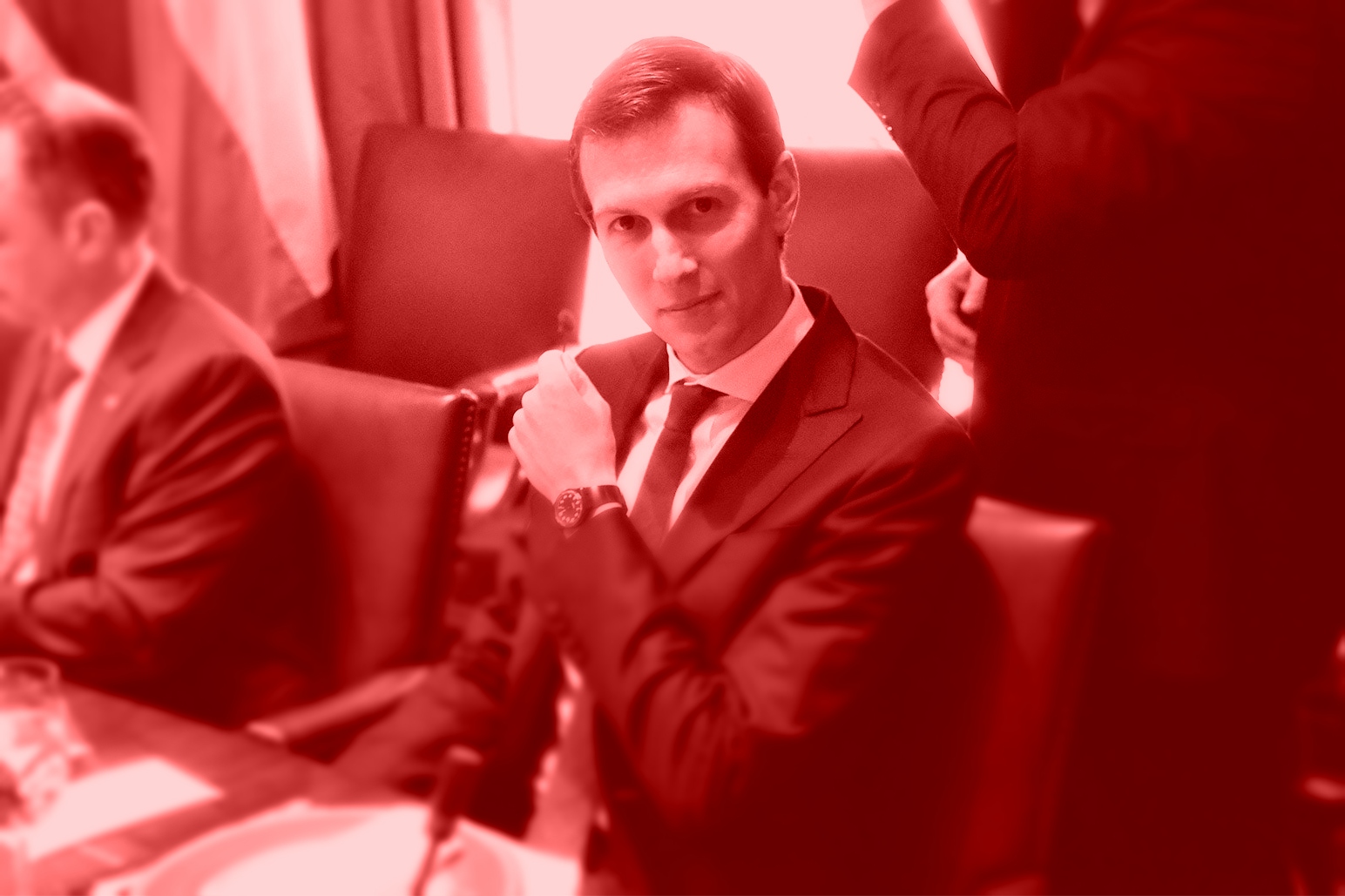 Vanity Fair: “Most troubling of all, perhaps, was a sentiment the expert said a member of Kushner’s team expressed: that because the virus had hit blue states hardest, a national plan was unnecessary and would not make sense politically.”

Said one expert: “The political folks believed that because it was going to be relegated to Democratic states, that they could blame those governors, and that would be an effective political strategy.”

“That logic may have swayed Kushner.”

Steven Calabresi, co-founder of the conservative Federalist Society, wrote in a New York Times that President Trump’s suggestion to delay the election “fascistic” and grounds for the president’s impeachment.

Said Calebresi: “I am frankly appalled by the president’s recent tweet seeking to postpone the November election. Until recently, I had taken as political hyperbole the Democrats’ assertion that President Trump is a fascist.”

He added: “But this latest tweet is fascistic and is itself grounds for the president’s immediate impeachment again by the House of Representatives and his removal from office by the Senate.”

“The White House is willing to cut a deal with Democrats that leaves out Senate Republican legislation aimed at protecting employers, hospitals and schools from coronavirus-related lawsuits,” the Washington Postreports.

“The White House wants and is pushing for the ‘liability shield’ as a top priority but would be willing to sign off on a deal that lacks the legal protections.”

New York Times: “Mr. Trump’s approach to the negotiations over another round of federal stimulus for the ailing economy has confounded allies, rivals and outside observers. He pushed hard for big-ticket tax cuts that Senate Republicans did not want, along with $1.75 billion to rebuild the F.B.I.’s headquarters in Washington and an expanded tax break for business lunches. And he has derided efforts to find middle ground with Democratic leaders on a comprehensive economic rescue package, declaring on Wednesday that ‘we really don’t care’ about several possible parts of it.”

“Lobbyists, economists and members of Congress say they are baffled by Mr. Trump’s shifting approach and apparent lack of urgency to nail down another rescue package that he can sign into law.”

“President Trump’s go-it-alone presidency crested on Thursday with a suggestion that the country delay the November election,” Politicoreports.

“The idea undercut allies and aides who months ago accused Joe Biden of promoting ‘conspiracy theory ramblings’ by predicting Trump would do this very thing. It aggravated his own negotiations on Capitol Hill, emboldening Democrats who want more election funding. And it forced Trump’s supporters either to defend the president’s musings as a savvy attempt to troll and distract his critics, or to insist it was just the president playing thoughtless pundit.”

“Notably, many people he needed to play along — particularly Congress, which has the power to change an election date — refused even to engage.”

First Read: “What’s been remarkable about Trump’s summer so far is how so many of his actions, declarations and tweets have all backfired on him.”

Susan Glasser: “So, sorry, we cannot just ignore it when the President threatens to cancel an election. This is the kind of statement that should haunt your dreams. It is wannabe-dictator talk. It is dangerous even if it is not attached to any actions. And those who think that some actions will not follow have not been paying attention.”

“My alarm stems from having covered Russia when Vladimir Putin was dismantling the fragile, flawed democratic institutions that the country had established after the fall of the Soviet Union. It stems from reading history. It stems from having watched the past four years in America, where, day by day, the unthinkable has happened and been justified, rationalized, and explained away.”

The Department of Homeland Security has compiled “intelligence reports” about the work of American journalists covering protests in Portland, Ore., in what current and former officials called an alarming use of a government system meant to share information about suspected terrorists and violent actors, the Washington Post reports.

Jonathan Last: “What is Donald Trump’s incentive structure right now? The hierarchy pretty obviously goes something like this:

“You will note that ‘Protecting Congressional Republicans’ is not on that list.”

“It is becoming clear—even to Trump—that barring extreme outside events, his primary goal is off the table. While it remains possible that some event intercede—a meteor strike, a shooting war, a health crisis—there is nothing that Trump himself can really do to change the outcome of the election. And so as you move down Trump’s incentive structure, he has pivoted to items 2, 3, and 4.”

“In furtherance of those goals, we should expect Trump to be more erratic and outlandish, more openly racist, and to flirt even more openly with outright delegitimization of the election.”

CNN: “Biden allies and others close to the vice presidential vetting process said California Rep. Karen Bass, the 66-year-old chair of the Congressional Black Caucus, has gained real traction in the late stage of the search. Amid furious last-minute lobbying and speculation about Biden’s historic decision, California Sen. Kamala Harris and Susan Rice, Barack Obama’s former national security adviser, are also believed to be among the most serious contenders.”

“Biden’s team has yet to tell any of the women they’ve considered in earnest for the vice presidential role that they are officially out of the running, with one source saying 11 women are still formally being considered.”

Brookings: “There is no relationship—visually or statistically—between school districts’ reopening decisions and their county’s new COVID-19 cases per capita. In contrast, there is a strong relationship—visually and statistically—between districts’ reopening decisions and the county-level support for Trump in the 2016 election.”

President Trump is trailing badly in most polls, but his advisers tell Business Insider that he’ll jump ahead of Joe Biden after Labor Day when voters pay closer attention to the presidential election.

Said GOP operative Jeff Roe: “He’s a political starfish. Whenever he loses a limb, he grows another one. He’s the political candidate who can never be killed. A lot can change in 100 days and the only certainty is that it will.”

An excerpt from Jeffrey Toobin’s new book, True Crimes and Misdemeanors, on CNN:

“Given the wild pace of events, McCabe couldn’t be sure how long he’d last as director, so he wanted to lock down as much evidence as possible. Most important, he told the investigating agents to place Comey’s memos in SENTINEL, the FBI’s case management software. McCabe knew that once documents were inside the system, they were virtually impossible to remove. With Comey’s memos in the system, the investigators were certain to have access to them — even if McCabe himself would eventually be gone.”

“Indeed, FBI officials even went a step farther. Once McCabe became director, Bureau employees grew so concerned that Trump would try to shut down the investigation that they secreted at least three copies of key documents, including Comey’s memos, in remote locations around the Bureau.”

Sen. Rick Scott (R-FL) is lining up support to chair the National Republican Senatorial Committee for the 2022 midterms — “a plum post that would put him in close contact with top Republican donors and finance chairs around the country as he mulls a potential presidential run in 2024,” the Wall Street Journal reports.

“Scott has discussed the post with his Republican colleagues, who will vote on the next chair following the November election.”

The Sun Sentinel pleaded in an editorial for more action by Florida Gov. Ron DeSantis (R) to battle the coronavirus, reminding him: “We’re dying here.”

“With each passing day, COVID-19 continues to careen out of control in Florida. Your daily upbeat message is hopelessly at odds with what Floridians are going through. You make it sound like everything is headed in the right direction. But it’s not.”