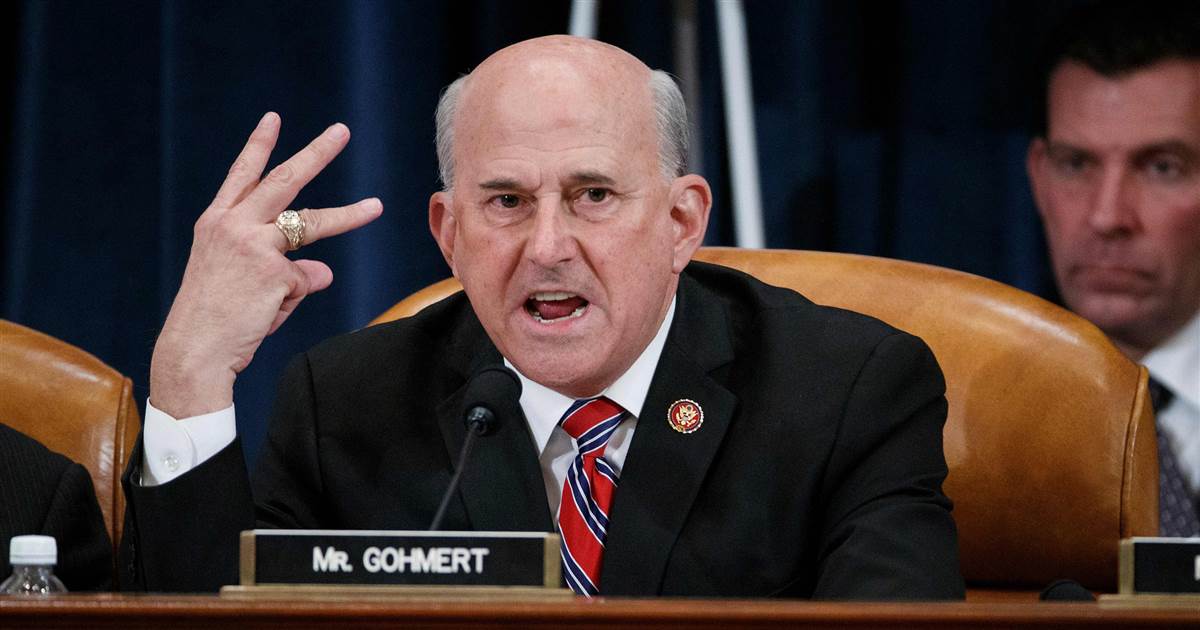 “Rep. Louie Gohmert — a Texas Republican who has been walking around the Capitol without a mask — has tested positive for the coronavirus,” Politico  reports. “Gohmert was scheduled to fly to Texas on Wednesday morning with President Trump and tested positive in a pre-screen at the White House.”

Manu Raju: “I’ve spent a lot of time in House gallery watching Gohmert frequently interact with colleagues and not wearing a mask. He doesn’t maintain social distance and talks at length with members.“

After testing positive for the coronavirus, Gohmert went back to his Capitol Hill office, ABC News reports. He told staff members he wanted to inform them in person instead of finding out from news reports. I am sure all of those staffers, who are also now infected, appreciated that gesture.

Gohmert spoke to Attorney General William Barr yesterday without a mask and for “a comment or two,” according to Olivia Beavers. “Would say from memory, they were within arms length.” Reuters reports Barr will now be tested.

Gohmert told the American Independent that he probably contracted coronavirus because he wore a mask more frequently in recent days. Said Gohmert: “I can’t help but think that if I hadn’t been wearing a mask so much in the last 10 days or so, I really wonder if I would have gotten it.” Up until that last comment, I was just shrugging my shoulders and saying Karma is a bitch. Now, I hope he suffers greatly. People this violently arrogant yet ignorant need to suffer the consequences. The world will be a better place without him polluting it.

You think I am wrong for saying this? Well, consider this: Just after reports that Rep. Louie Gohmert (R-TX) had tested positive for coronavirus, Politico got an email from one of his aides: “Thank you for letting our office know Louie tested positive for the Coronavirus. When you write your story, can you include the fact that Louie requires full staff to be in the office, including three interns, so that ‘we could be an example to America on how to open up safely.’ When probing the office, you might want to ask how often were people berated for wearing masks.”

House Majority Leader Steny Hoyer (D-MD) said that those congressional Republicans still refusing to wear masks amid the coronavirus pandemic are, themselves, a public health threat, The Hill reports.

Said Hoyer: “Very frankly, too many Republicans have continued to act extraordinarily irresponsibly.”

Jonathan Chait: “The reason Trump’s tactic fails is that, by deploying troops to fight the anarchists, he broadens the issue into a fight about Trump himself. This inevitably draws more, largely nonviolent protesters, into the streets. ‘The numbers of protesters had dwindled substantially in recent weeks,’ one reporter in Portland observed last week, ‘but reports of heavily armed, unidentified, camouflaged federal officers abducting people off the street into unmarked vehicles and meting out violence on the people of Portland have thoroughly re-energized the populace.’”

“The same thing happened further north. ‘Nightly protests since the police killing of George Floyd in Minneapolis had dwindled in recent weeks in Seattle but were reinvigorated in the wake of federal action in the Portland protests and after Washington Gov. Jay Inslee (D) tweeted that President Trump had sent federal law enforcement agents to the city,’ reported the Post.”

“And so the scenes that Trump craves, pitting soldiers against black-clad radicals, have transformed quickly into troops against veterans, moms, and other antagonists who cut a more sympathetic profile. The protesters report that they have joined the protests because of Trump’s response to the protests. Tessa and Leshan Terry formed the ‘Wall of Vets’ in Portland, and came to their first demonstration after seeing video of agents beating a fellow Navy veteran.”

President Trump goes full racist again on Twitter: “I am happy to inform all of the people living their Suburban Lifestyle Dream that you will no longer be bothered or financially hurt by having low income housing built in your neighborhood… Your housing prices will go up based on the market, and crime will go down. I have rescinded the Obama-Biden AFFH Rule. Enjoy!”

This is what he is shouting to white middle class: I kept those ghetto blacks out of your neighborhood.

President Trump said that Senate Republicans who oppose using the next coronavirus stimulus package to fund a new $1.75 billion headquarters for the FBI “should go back to school,” Axios reports.

He added: “Those Republicans should go back to school and learn. You need a new building. It’s a bad building, it’s a dangerous building … it’s not a good building from the inside, it’s a very expensive building.”

Pressed on why he didn’t raise the matter in Thursday’s call, he said: “That was a phone call to discuss other things, and frankly that’s an issue that many people said was fake news.”

Seattle Mayor Jenny Durkan announced that federal agents that had been deployed to Seattle last week to protect federal buildings from anticipated protests have left the city.

Stuart Stevens: “After Mitt Romney lost the 2012 presidential race, the Republican National Committee chairman, Reince Priebus, commissioned an internal party study to examine why the party had won the popular vote only once since 1998. The results of that so-called autopsy were fairly obvious: The party needed to appeal to more people of color, reach out to younger voters, become more welcoming to women. Those conclusions were presented as not only a political necessity but also a moral mandate if the Republican Party were to be a governing party in a rapidly changing America.”

“Then Donald Trump emerged and the party threw all those conclusions out the window with an almost audible sigh of relief: Thank God we can win without pretending we really care about this stuff. That reaction was sadly predictable. I spent decades working to elect Republicans, including Mr. Romney and four other presidential candidates, and I am here to bear reluctant witness that Mr. Trump didn’t hijack the Republican Party. He is the logical conclusion of what the party became over the past 50 or so years, a natural product of the seeds of race, self-deception and anger that now dominate it. Hold Donald Trump up to a mirror and that bulging, scowling orange face is today’s Republican Party.”

More than 150,000 people have died in the United States from the coronavirus, according to a New York Times database, as the rate of deaths continues to rise on the heels of ballooning infections and hospitalizations in many areas.

Bloomberg: “Data due Thursday are forecast to show U.S. gross domestic product plummeted an annualized 34.8% in the second quarter, the most in records dating back to the 1940s, after the spread of Covid-19 prompted Americans to stay home and states to order widespread lockdowns.”

Justice Brett Kavanaugh sent a series of private memos to his fellow justices in an attempt to dissuade them from ruling on whether the president should be compelled to give his financial records to House investigators, CNN reports.

He reportedly argued that courts shouldn’t get involved in political questions, but the strategy could have left Trump with no legal route to stop his banks from handing over his tax returns to Congress.

Playbook: “There comes a point in every congressional negotiation where it would be helpful for Google Translate to have a feature to turn Capitol Hill speak to English. Political leaders talk in hard-to-decipher code that leaves reporters confused, markets seesawing and novice observers guessing what the heck everyone is talking about.”

Reid Wilson notes that Kodak stock volume has ranged from 52,000 to 215,000 shares per day since July 1. On Monday, the day before President Trump tapped the former film giant to make drug ingredients, 1,645,000 shares traded hands.

“In the fall of 2018, when former CIA director John Brennan decided to write his memoir, he asked the agency for his official records, including his notes and any documents that he had reviewed and signed that were classified. The CIA, where Brennan had worked for nearly 30 years, said no,” the Washington Post reports.

“It was a break with decades of tradition. The CIA routinely lets former directors review classified files when writing books about their careers. Their manuscripts are scrutinized to ensure they don’t expose any national secrets.”

New York Times: “Each state, each city has its own crisis driven by its own risk factors: vacation crowds in one, bars reopened too soon in another, a revolt against masks in a third… The New York Times interviewed 20 public health experts — not just clinicians and epidemiologists, but also historians and sociologists, because the spread of the virus is now influenced as much by human behavior as it is by the pathogen itself.”

“Overall, the scientists conveyed a pervasive sense of sadness and exhaustion. Where once there was defiance, and then a growing sense of dread, now there seems to be sorrow and frustration, a feeling that so many funerals never had to happen and that nothing is going well. The United States is a wounded giant, while much of Europe, which was hit first, is recovering and reopening — although not to us.”