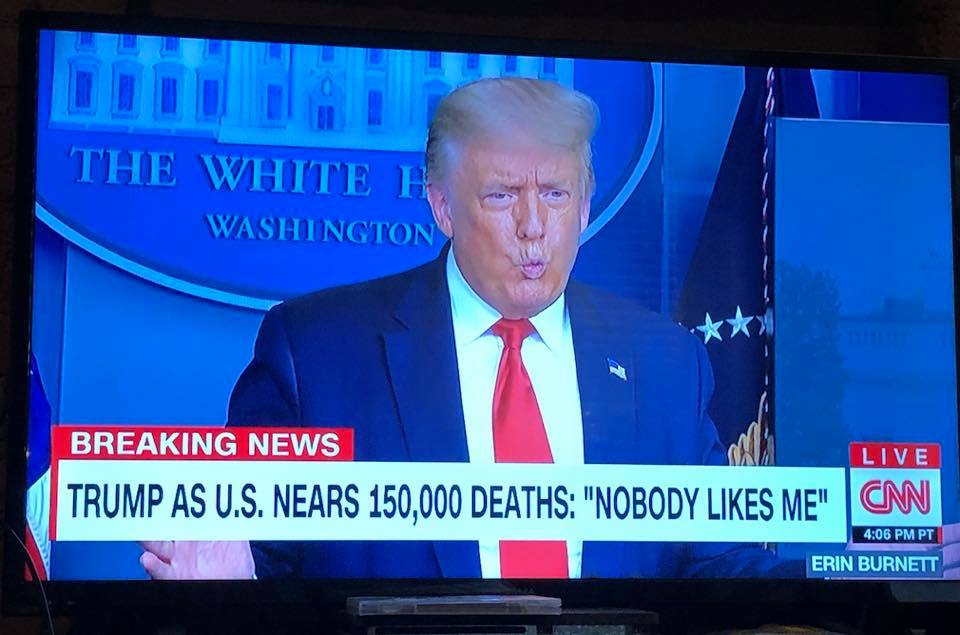 “President Trump devolved into self-pity during a White House coronavirus briefing on Tuesday, lamenting that his approval ratings were lower than those of two top government medical experts,” the New York Times reports.

“Just over a week after he began a rebooted effort, driven by rising infection rates and sinking poll numbers, to talk about the virus in terms more in line with medical consensus, Mr. Trump was again making unfounded claims and defending discredited medical experts. It was the sort of eccentric, science-deficient performance that many of his aides believe unnerved the public during the spring and has come to gravely threaten his re-election prospects.”

“Noting that Dr. Anthony Fauci and Dr. Deborah Birx have high approval ratings even as his own have sagged, Mr. Trump added, ”And yet, they’re highly thought of — but nobody likes me. It can only be my personality.’”

Playbook: “High-stakes legislative debates aren’t always battles of ideas. They don’t necessarily test the power of persuasion. They’re staring contests between powerful political leaders who are trying to humiliate their opponents, and squeeze as much out of them as possible while seeking to achieve a political and policy victory that’s palatable to the majority of their internal constituency — their colleagues — and their external constituency, the voters.”

“No one excels at these affairs like Senate Majority Leader Mitch McConnell and Speaker Nancy Pelosi — the respective party leaders. And no one has watched from the sidelines and admired the negotiating game — and longed to get in it — like Mark Meadows, the former House Republican from North Carolina and current White House chief of staff.”

“Washington is now kicking off what’s shaping up to be a real cliffhanger over another round of coronavirus relief 98 days before Election Day.”

Key takeaway: “The general consensus of aides in both parties, on both ends of Pennsylvania Avenue, is that Democrats have a healthy negotiating edge.”

The Republican coronavirus stimulus proposal includes $1.75 billion for the design and construcion of a new FBI headquarters at the request of the Trump administration, CNN reports. Senate Majority Leader Mitch McConnell (R-KY) said he does not support money for a new FBI building inserted by the White House into the latest coronavirus relief bill, Politico reports.

“The GOP Senate’s new $1 trillion coronavirus stimulus bill restores hundreds of millions of dollars in Pentagon spending that the Trump administration redirected to help pay for President Trump’s border wall,” the Washington Post reports. The Dems should scrap these provisions as well. That money is lost to the Defense Department forever. They are criminals for allowing Trump to steal that money.

Washington Post: “Senate Republicans’ coronavirus relief proposal came under attack from a coalition of hunger advocates Tuesday for not extending funding for food assistance programs, despite rising demand during the pandemic.”

“Although the Senate GOP proposal offers no new funds for SNAP and Pandemic EBT, it does double the tax deduction for business meals, known as the ‘three-martini-lunch deduction,’ increasing the reimbursement from 50% to 100% of meals.”

Rep. Pramila Jayapal (D-WA) slammed Attorney General William Barr over his apparent willingness to intervene when protesters are opposed to President Trump’s policies but not when those protesters are supportive of the president.

Said Jayapal: “When White men with swastikas storm a government building with guns, there is no need for the president to activate you, because they’re getting the president’s personal agenda done.”

Attorney General Bill Barr told the House Judiciary Committee that he has “no reason to think” the 2020 presidential election will be rigged, Axios reports. Barr also said that he would vacate his position if Trump lost his re-election bid and refused to leave office after a clear defeat. However, he declined to comment on whether Trump would leave office.

“The US economy is emerging from what experts think will be its worst quarter on record,” CNN reports. “Although that’s behind us now and conditions have improved since the country ground to a halt in April, the recovery remains fragile and could ultimately disappoint hopeful economists.”

Twitter pulled a video making false claims about the novel coronavirus after it was shared by President Trump, CNN reports. The video showed doctors touting the controversial anti-malarial drug hydroxychloroquine as “a cure for COVID” and doubting the effectiveness of wearing masks.

Donald Trump Jr’s Twitter account was restricted after he shared a video of Dr. Stella Immanuel, who made baseless claims about the coronavirus.

Daily Beast: “Immanuel, a pediatrician and a religious minister, has a history of making bizarre claims about medical topics and other issues. She has often claimed that gynecological problems like cysts and endometriosis are in fact caused by people having sex in their dreams with demons and witches.”

President Trump on Twitter: “So disgusting to watch Twitter’s so-called ‘Trending’, where sooo many trends are about me, and never a good one. They look for anything they can find, make it as bad as possible, and blow it up, trying to make it trend. Really ridiculous, illegal, and, of course, very unfair!”

Political scientists Lynn Vavreck and Christopher Warshaw have found a rise in coronavirus-related deaths in a given community tends to reduce support for Republicans.

“Republicans running for the U.S. House and Senate lose just as much support as Mr. Trump does when deaths rise locally. It may feel as if all politics is national, but it is not.”

“Research shows that when people are killed in action during wartime, residents of the place the victims are from tend to hold elected leaders in Congress and the White House accountable. Political scientists have found this to be true for midterm and presidential elections during the Civil War, the Vietnam War, and the wars in Iraq and Afghanistan. Coronavirus-related deaths seem to be having a similar effect.”

Dr. Anthony Fauci told ABC News that he has “not been misleading the American public” after President Trump retweeted critical commentsabout him.

Said Fauci: “I don’t tweet, I don’t even read them. So I don’t really want to go there. I just will continue to do my job no matter what comes out, because I think it’s very important… I have not been misleading the American public under any circumstances.”

Goldman Sachs says the U.S. dollar’s reign as the world’s reserve currency is coming under threat, as evinced by the recent surge in gold prices, Bloomberg reports.

“The greenback faces several risks, including that the U.S. Federal Reserve may shift toward an ‘inflationary bias,’ a rise in political uncertainty and growing concerns surrounding another spike in coronavirus infections in the country… They added that the debt buildup as a result of the pandemic may lead to debasement fears.”

New York Times: “Whether he is dealing with the loss of a family member, the deaths of nearly 150,000 Americans in a surging pandemic, more than 30 million people out of work or the racial unrest brought on by the killings of African-Americans by white police officers, President Trump almost never shows empathy in public. A book published this summer by his niece, Mary L. Trump, has focused renewed attention on this trait.”

“Mr. Trump has held no national day of mourning for victims of the virus. He has surrounded himself at Rose Garden events with business executives pushing to reopen the economy rather than families who have lost jobs or loved ones…”

“There are many reasons — denial and disorganization among them — that Mr. Trump’s handling of the virus has led to catastrophic and overlapping crises in the United States. But even Republicans say one primary cause is the president’s failure to put himself in the shoes of others and harness their pain. His unwillingness, or inability, to comfort an anxious nation has appalled critics, stunned allies and aggravated White House staff members, who remain perplexed why this most basic part of presidential leadership eludes him.”

Ron Brownstein: “President Trump’s racially charged warnings to suburban voters about crime and housing face a fundamental headwind: the suburbs themselves are much more racially diverse than even two decades ago.”

“In contrast to the stereotype of homogenous communities of White families behind white picket fences, in many of the largest suburban counties around America Whites now compose only about half or less of the population.”

“That’s especially true in the Sun Belt suburbs around cities such as Atlanta, Orlando, Phoenix, Denver, Los Angeles, Houston, Dallas and Austin, Texas, and Charlotte, North Carolina, which are emerging as critical election battlegrounds in 2020 and beyond.”

“The second-largest teachers’ union in the United States announced on Tuesday that it would support its 1.7 million members if they choose to strike in districts and states that move to reopen classrooms without adequate health and safety measures,” the New York Times reports.

Said American Federation of Teachers President Randi Weingarten: “If authorities don’t protect the safety and health of those we represent and those we serve, as our executive council voted last week, nothing is off the table.”

All anti-vaxxers should be rounded up and isolated in a bubble. And they should be denied medical treatment as they infect each other.

Tennessee Gov. Bill Lee (R) refuses to shutter bars in the state even after top White House coronavirus adviser Dr. Deborah Birx directly encouraged the state to do so Monday, the Tennessean reports.

“Birx said she traveled to Tennessee because the state teeters on a precipice from which other Southern states had already fallen: The virus has spread among asymptomatic young people into rural areas, and it now threatens to reach new levels of infection.”

Said Birx: “It is at this very moment where we could change the trajectory of the epidemic before it goes into full … of what we call logarithmic spread, as we’ve seen across the South.”