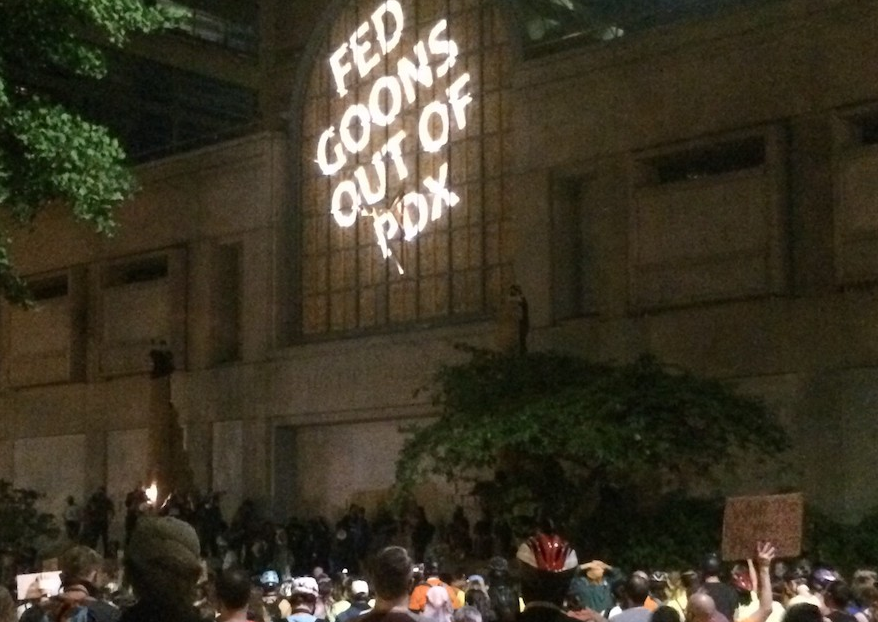 “Weeks of violent clashes between federal agents and protesters in Portland, Ore., galvanized thousands of people to march through the streets of American cities on Saturday, injecting new life into protests that had largely waned in recent weeks,” the New York Times reports..

“One of the most intense protests was in Seattle, where a day of demonstrations focused on police violence left a trail of broken windows and people flushing pepper spray from their eyes. At least 45 protesters had been arrested as of early evening, and both protesters and police officers suffered injuries.”

First, there was a “wall” of moms protecting Portland protesters — now there’s a wall of vets doing the same, the New York Times reports. “A group of military veterans joined protesters in the city for the first time Friday night, standing with their hands clasped behind their backs or holding Black Lives Matter signs.”

The body of the late Rep. John Lewis will be escorted Sunday across the famous Edmund Pettus Bridge in Selma, Alabama, where the civil rights icon first helped lead a march for voting rights in 1965, CNN reports.

White House chief of staff Mark Meadows told ABC News the administration is “hopeful” that it can announce new therapies to treat coronavirus “in the coming days.”

John Harwood reviews It Was All A Lie, the forthcoming book by disillusioned Republican ad-maker Stuart Stevens. “He casts Trump as not an aberration but rather the culmination of decades-long evolution within the GOP. Having advised four Republican presidential nominees and dozens of winning Senate and gubernatorial campaigns, Stevens blends diagnosis of the party’s ills with confession for having fostered them.”

“With roughly 25 million Americans on the precipice of losing expanded unemployment benefits, Congress’s ability to work on deadline will be put to the test this week,” the Wall Street Journal reports.

“Intraparty disagreements on unemployment insurance delayed the release of a Republican opening offer, giving lawmakers little time before the $600 weekly supplement to jobless benefits ends. Because of how states process aid, the benefit will effectively run out this weekend for many Americans, though it is officially set to expire on July 31.”

As the coronavirus pandemic worsens across the country, the White House shared a photo of President Trump and football legend Brett Favre golfing yesterday afternoon.

“North Korean leader Kim Jong Un declared an emergency and a lockdown in a border town after a person suspected of being infected with the novel coronavirus returned from South Korea after illegally crossing the border,” Reuters reports.

“If confirmed, it would be the first case officially acknowledged by North Korean authorities.”

“As Florida became a global epicenter of the coronavirus, Gov. Ron DeSantis held one meeting this month with his top public health official, Scott Rivkees, according to the governor’s schedule. His health department has sidelined scientists, halting briefings last month with disease specialists and telling the experts there was not sufficient personnel from the state to continue participating,” the Washington Post reports.

“As the virus spread out of control in Florida, decision-making became increasingly shaped by politics and divorced from scientific evidence… The crisis in Florida, these observers say, has revealed the shortcomings of a response built on shifting metrics, influenced by a small group of advisers and tethered at every stage to the Trump administration, which has no unified plan for addressing the national health emergency but has pushed for states to reopen.”

Eighteen states set single-day coronavirus case records over the last week, driving the U.S. toward another national high, the New York Times reports. Deaths are also rising: Friday was the fourth consecutive day with more than 1,100 reported U.S. deaths, which are trending upward in 30 states.

“Now, there’s a big difference between foreign interference and foreign influence. They continue to try to influence, as everyone does across the globe. But in terms of actually affecting the vote totals and interacting, I think we’re in a good place.”

“A Christian nonprofit organization that fights world hunger asked Rep. Ted Yoho (R-FL) to resign from its board after he confronted a female colleague and then reportedly used a sexist expletive after Rep. Alexandria Ocasio-Cortez (D-NY) was out of earshot,” the Washington Post reports.

Tom Nichols: “America has now passed the milestone of 4 million COVID cases, and we’re still arguing with doctors and epidemiologists about masks and school closures. I expected some of this, because I literally wrote the book over three years ago on why so many Americans think they’re smarter than experts. What I did not expect is that this resolute and childish opposition to expertise would be hijacked by the president of the United States and an entire American political party, and then turned into a suicide cult.”

Sarah Zhang: “A vaccine, when it is available, will only mark the beginning of a long, slow ramp down. And how long that ramp down takes will depend on the efficacy of a vaccine, the success in delivering hundreds of millions of doses, and the willingness of people to get it at all. It is awful to contemplate the suffering still ahead. It is easier to think about the promise of a vaccine.”

Roger Cohen: “No people has found the American lurch toward authoritarianism under President Trump more alarming than the Germans. For postwar Germany, the United States was savior, protector and liberal democratic model. Now, Germans, in shock, speak of the ‘American catastrophe.’”

“A recent cover of the weekly magazine Der Spiegel portrays Trump in the Oval Office holding a lighted match, with a country ablaze visible through his window. The headline: ‘Der Feuerteufel,’ or, literally, ‘the Fire Devil.’”

He also implied that the decision might be responsible for exacerbating the outbreak of Covid-19 in New York.