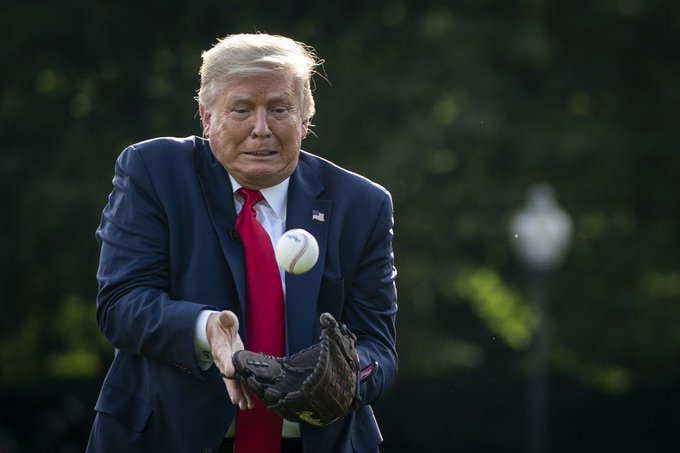 A new CNN/SSRS poll finds that Joe Biden leads Donald Trump in Florida by a 51% to 46% margin.

Harry Enten: “Florida is probably the bellwether state that most meets the definition of ‘must win’ for Trump if he wants to be elected to a second term, and he is losing there. No Republican has won the presidency without Florida since Calvin Coolidge in 1924.”

Cook Political Report: “Given its track record in presidential campaigns over the last 20 years, it’s hard to think of Florida as anything other than a Toss Up. Since 2000, the winner of the state has never carried it by more than 5 points. In fact, in four of the last five presidential elections, the winner squeaked in by 3 points or less.”

“But, at this point, this battleground state looks less like a 50-50 proposition and more like a state that is leaning Biden’s way.”

New York Times: “Mr. Trump’s attempt to downplay the coronavirus, or deride it as a threat exaggerated by his Democratic opponents and the media, has met the reality of rising caseloads, death counts and overwhelmed intensive care units in places like Texas, Arizona, Georgia and Florida, all states that he won in 2016 and that the Biden campaign had until now viewed as long shots.”

“The president’s handling of the virus is shaping up as not only a policy failure, but also a political one. Rather than strengthening his position against Mr. Biden, Mr. Trump’s response to the virus appears to have created a backlash among voters — one that has only elevated his opponent.”

“On the second Friday in June, a group of political operatives, former government and military officials, and academics quietly convened online for what became a disturbing exercise in the fragility of American democracy,” the Boston Globe reports.

“The group, which included Democrats and Republicans, gathered to game out possible results of the November election, grappling with questions that seem less far-fetched by the day: What if President Trump refuses to concede a loss, as he publicly hinted recently he might do? How far could he go to preserve his power? And what if Democrats refuse to give in?”

Said Georgetown law professor Rosa Brooks: “All of our scenarios ended in both street-level violence and political impasse… The law is essentially … it’s almost helpless against a president who’s willing to ignore it.”

A new AP-NORC poll finds finds President Trump’s approval for his handling of the COVID-19 pandemic falling to a new low, with just 32% of Americans supportive of his approach.

Just 20% of Americans say the U.S. is headed in the right direction.

“Republicans acknowledge that this upends the usual debate about debates, in which an incumbent rarely wants to give the challenger the same platform. Incumbent senators are pleading with their lesser-known rivals to join them on debate stages, or Zoom, trying to elevate the profile of these Democrats.”

“But they view this as a matter of necessity in a campaign in which Republicans are running into the head winds of President Trump’s sagging poll numbers amid his stumbling response to the coronavirus pandemic.”

Elaine Godfrey: “Donald Trump needs Arizona on his side in November. Losing the state and its 11 Electoral College votes would, at the very least, mean a drastically narrower path back to the White House. Keeping Arizona red shouldn’t be a challenge; the state has long been a Republican stronghold. But Arizona is changing rapidly, and right now, the forecast for the GOP looks grim: In 2018, Kyrsten Sinema became the first Democrat to win a Senate race in the state since the 1980s, and Joe Biden has been leading in the presidential polls there for weeks. In this year’s Senate race, the astronaut turned Democratic candidate Mark Kelly is ahead of the incumbent Republican Martha McSally by a comfortable margin. And after the state was reopened by its Republican governor, it experienced a massive surge in COVID-19 infections.”

“One might think that, in its moment of peril, the Arizona GOP would attempt to win over moderates. Yet the person charged with shepherding the party to victory in this most crucial moment is the state GOP chairperson Kelli Ward, a pro-Trump zealot with a soft spot for conspiracy theories, a woman who is most famous for her failed primary challenge to Republican Senator John McCain in 2016. Just as polls show Arizonans—especially those in the suburbs—souring on Trump, the state party has veered sharply to the right.”

Associated Press: “In tweets, campaign ads and new policies, Trump is trying to win over suburbanites by promising to protect their ‘beautiful’ neighborhoods from the racial unrest that has gripped some U.S. cities this summer. He’s sent federal agents to stem violence in cities, warned of a way of life being ‘obliterated,’ and raised the prospect of falling property values.”

“It’s a strategy with deep roots in presidential politics, racist overtones and some record of success. But even some GOP strategists and Republican voters note it doesn’t account for the rapid demographic changes in the suburbs and may be misreading the top concerns of voters he’s trying to retain.”

“The Republican National Committee in a new federal filing this week said it spent $14,000 on ‘building maintenance.’ In reality, it was disguising a purchase of face masks,” Business Insider reports.

“Some conservatives chafe at wearing masks, but the spending reveals GOP party leaders were taking the coronavirus more seriously than they were publicly letting on.”

“Robert and Rebekah Mercer ranked among President Trump’s most influential backers in 2016. But they’ve all but abandoned the embattled president and aren’t likely to help him in the home stretch for 2020,” Business Insider reports.

Wall Street Journal: “Many of the thousands of county and local election officials who will be administering November’s presidential election are running email systems that could leave them vulnerable to online attacks, a new report has found.”

“More than half of the officials used email systems with limited protection from phishing attacks… The findings underscore problems with the country’s diverse, locally administered election system that attracted the attention of state-sponsored hackers four years ago.”

0 comments on “The Campaign Report – Dropping the ball”