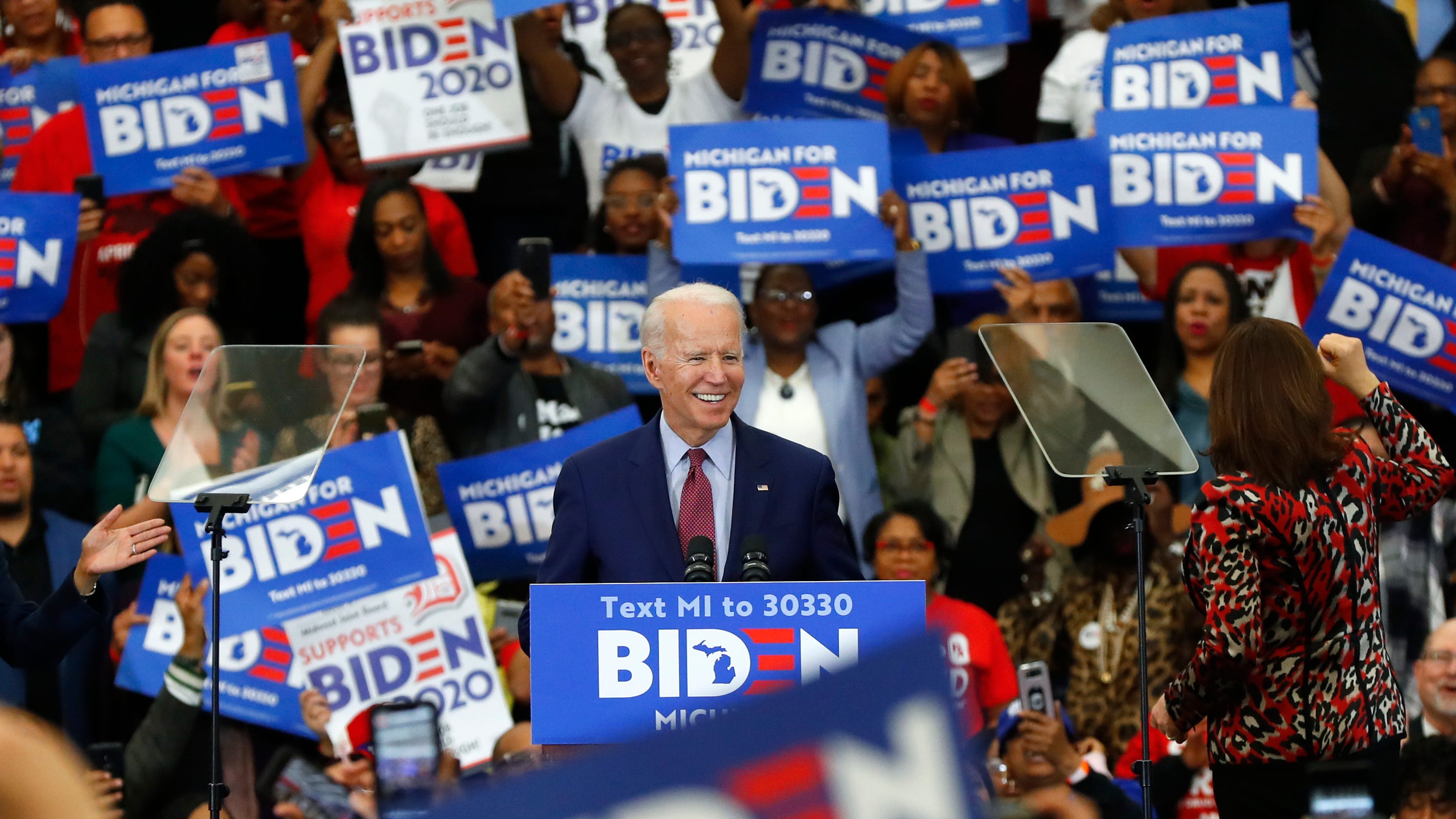 A new Quinnipiac poll in Florida finds Joe Biden has opened up a big lead over Donald Trump in the presidential race, 51% to 38%.

Former Clinton White House political director Doug Sosnik is out with a new slides and analysis of the 2020 election and concludes President Trump “is starring in a rerun of his 2016 campaign in a different country than the one that elected him president.”

“It can’t be over-stated how significant it is that Trump has never faced the voters since the completion of the political re-alignment. Yet, he need look no further than the 2018 mid-term elections to understand the implications on the Republican Party. During Trump’s presidency Republicans lost control of the House of Representatives after suffering the loss of 42 congressional seats, and gave up 10 governorships and over 450 state legislative seats. Trump’s chaotic presidency has pushed women, educated, and suburban voters, and increasingly older voters into the arms of Democrats. Millennials and people of color continue to oppose Trump in record high numbers.”

Sosnik notes support for Trump has declined across the board with all demographic groups, his decline in support from women, college-educated, and suburban voters is particularly pronounced. The implications of this political realignment, Sosnik writes, are that “the fast-growing states in the south and southwest are the new battlegrounds. Eligible voters in these states tend to be increasingly suburban, with large numbers of young and non-white voters — the very groups who Trump has alienated the most with his backward-looking President.”

With only six weeks until early voting begins, Trump’s chances to change the trajectory of the election are very limited. As Sosnik writes, “By the time Trump launches his October surprise, the majority of the country will have already voted.”

Jonathan Bernstein: “After a round of recriminations, the next two years are reasonably predictable: Republicans would react to unified Democratic government exactly the way they did in 1993 and 2009 — and arguably in 1977 and 1961 as well. They’d mount as much obstruction as they could in Congress, while charging the incoming administration with malfeasance. Outside of Washington, expect more Tea Party-type rallies, blaming Democrats for the high levels of unemployment they inherited and claiming their plans are socialist overreach. Expect partisans to rile up resentment the way they did in those years as well… There might be some talk about the long-term demographic challenges the party faces, but most will soon conclude that their main mistake was not being conservative enough. There will be no serious discussions within the party of the real problem: They can’t govern.”

“The reason this is easy to predict is because, as the party sees it, the Bob Dole Republicans in 1993-1994 and the Mitch McConnell Republicans in 2009-2010 were totally successful. Compromise is a trap, in this view; the way to recover is to oppose the Democrats flat-out.”

Hogan says he waited for a nickname from Trump: “I assumed he would go with ‘Fat Larry,’ an obvious choice as I had admittedly put on some weight since my cancer battle. Or maybe ‘Cancer Boy.’ That would be a good one. But it didn’t happen.”

Tom Steyer told CBS News that he’d like Joe Biden to pick a Black woman as his running mate. Said Steyer: “I’d like it to be an African-American woman because I think it’s a statement about where we are and I know that there’s some fantastic candidates.”

Joe Biden’s presidential campaign on Wednesday deployed a new tactic to reach voters when bunting-strewn stages and boisterous rallies have been set aside: using cinematic flourish to tease a major appearance with Barack Obama intended to excite Democrats and troll President Trump with the presence of his popular predecessor,” the Washington Postreports.

“Biden faces an urgent need to expand his digital presence in a campaign now likely to be defined to a great degree online, and will use the event — to be fully released on social media Thursday morning — as a way to reach Obama’s nearly 121 million Twitter followers. It leans on the former president’s stature and signature coolness — in the view of many voters Biden needs — to add sparkle as the campaign slogs through summer.”

“The video is also a sign of how much Biden and his team will focus on his partnership with Obama even as he goes through the process of searching for his own running mate.”

“Tennessee Secretary of State Tre Hargett (R) voiced opposition to offering drop boxes for absentee ballots, telling a U.S. Senate panel that the state requires returning those ballots by mail in the name of security,” the AP reports.

A new University of North Florida poll in Duval County finds 58% of residents opposed to holding the Republican convention in Jacksonville while 42% support it.

“President Trump’s relentless efforts to sow doubts about the legitimacy of this year’s election are forcing both parties to reckon with the possibility that he may dispute the result in November if he loses — leading to an unprecedented test of American democracy,” the Washington Postreports.

“The resulting turmoil could surpass the contention over the outcome of the 2000 presidential election, confounding the legal system, Congress and the public’s faith in how the country picks its leaders. Such a crisis could also have long-lasting consequences for a nation that has already been rocked this year by the coronavirus pandemic, an economic collapse and a reckoning over racial injustice.”

“President Trump’s private company filed a trademark application last week that suggested that it is starting a new line of business: organizing ‘telerallies’ for political campaigns,” the Washington Post reports.

“That could mark a shift in the company’s business model. Since Trump took office, his business has been paid millions by political campaigns, including Trump’s reelection effort. But it always remained one step away from politics: The company rented out ballrooms and office space to campaigns but did not market itself as a political company or offer services related to rallies or reaching voters.”

“The trademark application suggests that has changed. By filing it, trademark experts said, the company is saying it intends to enter this business soon.”

“Tensions among congressional Republicans fueled by the party’s diminishing electoral fortunes broke out into the open this week — as GOP lawmakers sparred over the shape of the next coronavirus aid package, how vigorously to stand behind President Trump and which primaries to wade into that could help determine control of the Senate in November,” the Washington Post reports.

“The battles this week were a microcosm of the broader reckoning over the party’s future and how strong the populist tenets of Trumpism will hold after the president leaves office. The fractures are emerging now because of worries that the party faces doom at the polls this fall owing to Trump’s handling of the pandemic and his resulting falling poll numbers against presumptive Democratic presidential nominee Joe Biden.”

Kim Kardashian is asking the public to show compassion and empathy to husband Kanye West, who has said he’s running for president, the APreports.

Said West: “As many of you know, Kanye has bi-polar disorder. Anyone who has this or has a loved one in their life who does, knows how incredibly complicated and painful it is to understand.”

I understand. So get your husband back on his meds or get him involuntarily committed.

Washington Post: “The coronavirus pandemic is set to change the way millions of Americans can vote in November, as states expand access to mail-in voting as a safer alternative to in-person voting. As of now, nearly 180 million Americans who are eligible to vote would be able to cast a ballot by mail. Of those, 22 million live in states that will accept fear of the coronavirus as an excuse to vote absentee, or have switched to become ‘no excuse’ states.”

David Wasserman: “A closer look at the cross-tabs of recent surveys yields some surprising findings: Trump is actually performing a bit better with non-whites than he did against Hillary Clinton in 2016. And the group fueling Biden’s polling surge is seniors and white voters with college degrees.”

“The 2016 election was defined by mass defections to Trump of the remaining white, working-class members of the Democratic coalition, particularly in heartland states.”

“Much in the same way, the 2020 election is currently on track to see mass defections of the remaining white professional members of the Republican coalition to Biden — a trend disproportionately playing out in the suburbs, where those voters tend to live.”

Larry Sabato’s Crystal Ball makes eight ratings changes in House races this week and seven of them favor Democrats. “At this point, Democrats are more likely to net House seats than Republicans, although we’re still not expecting much net change overall.”