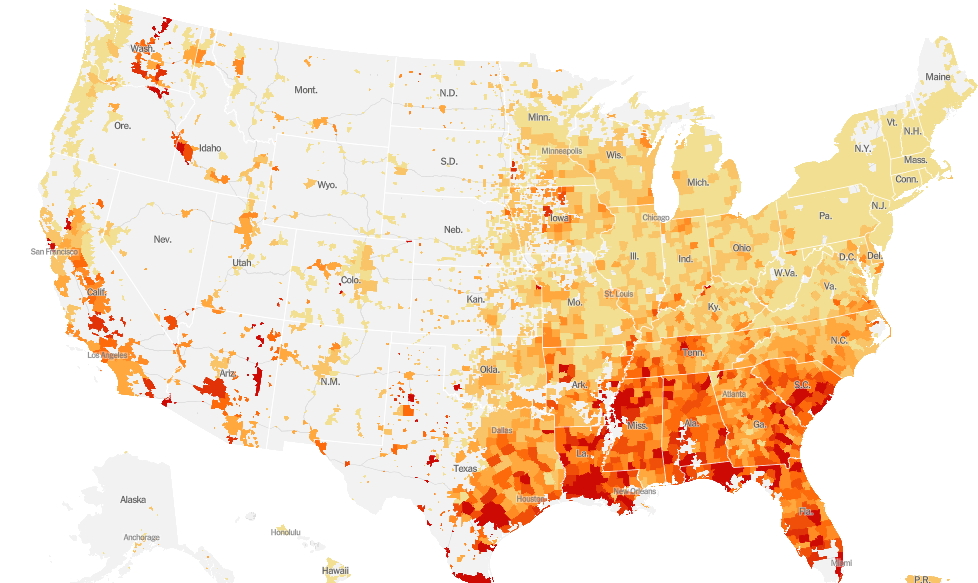 “We are in the process of developing a strategy that’s going to be very, very powerful… It will probably unfortunately get worse before it gets better, something I don’t like saying about things but that’s the way it is.” — President Trump, quoted by the New York Times, after months of dismissing the seriousness of the coronavirus crisis.

“Differences over how to fight the coronavirus pandemic have sparked infighting and tension within the White House, hampering its response as the death toll mounts and President Donald Trump’s approval ratings fall,” Reuters reports.

“The decision to restart briefings came after tension between Trump’s chief of staff, Mark Meadows, whose team took over leadership of the West Wing in March, and others in the White House, especially Vice President Mike Pence’s team, about the right strategy for talking to the country about the pandemic.”

The American Civil Liberties Union vowed to sue the Trump administration over the president’s executive order aimed at excluded undocumented persons from being counted in the 2020 census. The organization also sued when Trump tried to add a citizenship question to the census and lost in the Supreme Court: “We’ll see him in court — and win — again.”

“Millions of Americans who have missed rent payments due to the coronavirus pandemic could be at risk of being evicted in the coming months unless government measures to protect them are extended,” the Wall Street Journal  reports. “Nearly 12 million adults live in households that missed their last rent payment, and 23 million have little or no confidence in their ability to make the next one.”

In a brief but heated exchange, which was overheard by The Hill, Rep. Ted Yoho (R-FL) told Rep. Alexandria Ocasio-Cortez (D-NY) she was “disgusting” for recently suggesting that poverty and unemployment are driving a spike in crime in New York City during the coronavirus pandemic. Said Yoho: “You are out of your freaking mind.”

Ocasio-Cortez shot back, telling Yoho he was being “rude.” The two then parted ways. Ocasio-Cortez headed into the building, while Yoho, joined by Rep. Roger Williams (R-TX), began descending toward the House office buildings. A few steps down, Yoho offered a parting thought to no one in particular: “Fucking bitch.”

Ocasio-Cortez responded to her run-in with Yoho on the Capitol steps: “I never spoke to Rep. Yoho before he decided to accost me on the steps of the nation’s Capitol yesterday. Believe it or not, I usually get along fine with my GOP colleagues. We know how to check our legislative sparring at the committee door. But hey, ‘bitches’ get stuff done.”

Yoho, when asked Tuesday if he would apologize to Ocasio-Cortez, said, “There’s nothing to apologize for.” He denied calling Ocasio-Cortez the derogatory term but declined to comment further on what transpired.

Hoyer told reporters that Yoho should be “sanctioned” and that the Florida lawmaker should apologize for his comments, which he called “despicable” and “unacceptable.”

“Mr. Yoho owes not only the congresswoman an apology but also an apology on the floor of the House of Representatives,” the Maryland Democrat said.”

Georgia Gov. Brian Kemp (R) asked his state’s residents to “commit” to wearing a mask for four weeks, despite his ongoing lawsuit against Atlanta officials for mandating a face covering be worn, The Hill reports.

Financial Times: “The largest laboratory company in the U.S. has warned it will be impossible to increase coronavirus testing capacity to cope with demand during the autumn flu season, in a sign that crippling delays will continue to hamper the U.S. response to the pandemic.”

“Members of the conservative House Freedom Caucus tore into Rep. Liz Cheney (R-WY) during a heated GOP conference meeting on Tuesday, lobbing attacks at her for breaking with President Trump, supporting Dr. Anthony Fauci and backing a primary opponent to one of their colleagues,” Politico reports.

“Rep. Andy Biggs (R-AZ), the head of the Freedom Caucus, even accused Cheney of undermining the GOP’s ability to win back the House and said that if someone has a problem with Trump, they should keep it to themselves.”

Rep. Matt Gaetz (R-FL) called on House GOP Conference Chair Liz Cheney (R-WY) to step down or be removed from her leadership role following a heated confrontation during a House GOP conference meeting this morning. Gaetz says Cheney “has worked behind the scenes (and now in public) against Donald Trump and his agenda.”

Playbook: “This is the Freedom Caucus agitating against Cheney, who, most House observers understand, is positioning herself to continue to climb up the leadership ladder.”

“Householder, chief political aide Jeff Longstreth, and lobbyists Matt Borges, Neil Clark, and Juan Cespedes used the bribe money to expand the speaker’s political power and enrich themselves by millions of dollars through a ‘web’ of dark-money groups and bank accounts.”

“For decades, conservative activists and leaders have warned that ‘jackbooted thugs’ from the federal government were going to come to take away Americans’ civil rights with no due process and no recourse. Now they’re here—but they’re deployed by a staunchly right-wing president with strong conservative support,” The Atlantic reports.

“Defense Secretary Mark Esper has raised concerns within the administration about federal agents patrolling the streets of U.S. cities in camouflage uniforms similar to those worn by troops in war zones,” Politico reports.

Former Homeland Security secretary Tom Ridge “had sharp words for his former agency Tuesday, condemning the Trump administration’s decision to send federal officers into the streets of Portland to quell protests, saying it was ‘counterproductive,’ and that it was not the agency’s mission to act as domestic law enforcement,” the Pennsylvania Capital-Star reports.

Said Ridge: “The department was established to protect America from the ever-present threat of global terrorism. It was not established to be the president’s personal militia.”

He added: “Had I been governor, even now, I would welcome the opportunity to work with any federal agency to reduce crime or lawlessness in the cities. But I would tell you, it would be a cold day in hell before I would consent to an uninvited, unilateral intervention into one of my cities.”

Peter Wehner: “The most revealing answer from Donald Trump’s interview with Fox News Channel’s Chris Wallace came in response not to the toughest question posed by Wallace, but to the easiest. At the conclusion of the interview, Wallace asked Trump how he will regard his years as president.”

Said Trump: “I think I was very unfairly treated. From before I even won, I was under investigation by a bunch of thieves, crooks. It was an illegal investigation.”

“When Wallace interrupted, trying to get Trump to focus on the positive achievements of his presidency—’What about the good parts, sir?’—Trump brushed the question aside, responding, ‘Russia, Russia, Russia.’ The president then complained about the Flynn investigation, the ‘Russia hoax,’ the ‘Mueller scam’ and the recusal by his then-attorney general, Jeff Sessions.”

“Donald Trump is a psychologically broken, embittered, and deeply unhappy man. He is so gripped by his grievances, such a prisoner of his resentments, that even the most benevolent question from an interviewer—what good parts of your presidency would you like to be remembered for?—triggered a gusher of discontent.”

“The number of people infected with the coronavirus in different parts of the United States is anywhere from two to 13 times higher than the reported rates for those regions,” the New York Times reports. “The findings suggest that large numbers of people who did not have symptoms or did not seek medical care may have kept the virus circulating in their communities.”

Missouri Gov. Mike Parson (R) told KFTK that he would probably pardon the St. Louis couple who pointed guns at protesters marching past their home on June 28. The St. Louis Post-Dispatch reports the couple were charged Monday with gun crimes.

“The Senate Banking Committee voted 13-12 to approve Judy Shelton’s nomination to the Federal Reserve Board of Governors on Tuesday, sending the controversial, conservative economist to be considered before the full Senate,” the Washington Post reports. “Shelton has drawn scrutiny for her views on related to the long-abandoned gold standard, along with her calls for closer ties between the White House and the Fed.”

“Republicans toiled on Monday to resolve their differences with President Trump over the next coronavirus relief package, working to smooth out internal divisions ahead of what promises to be an intense battle with Democrats over providing federal aid to confront a virus that continues to surge and batter the economy,” the New York Times reports.

“Senate Republicans and Trump administration officials were coalescing around a roughly $1 trillion package that would most likely include tax breaks, direct payments and jobless aid for Americans struggling amid the pandemic; money for schools and health care; and liability protections for employers and health providers. But the president and congressional leaders remained at odds over several ideas Mr. Trump is pushing that many Republicans oppose, including conditioning all new education funding on the resumption of in-person school, removing funding for testing and tracing efforts nationwide, and including a payroll tax cut.”

“Senate Republican leaders, undeterred by the scathing criticism leveled against them for blocking President Barack Obama’s election-year Supreme Court nominee in 2016, are signaling that they are prepared to confirm a nominee by President Donald Trump even if that vacancy occurred after this year’s election,”  CNN reports.

“The push comes despite ample apprehension from influential Republicans that the GOP could pay a political price for treating a nominee under Trump differently than they did under Obama. It also comes as Democrats are increasingly worried about the fragile health of Justice Ruth Bader Ginsburg, the 87-year-old liberal jurist who recently made public a new bout with cancer, and the possibility of other retirements.”