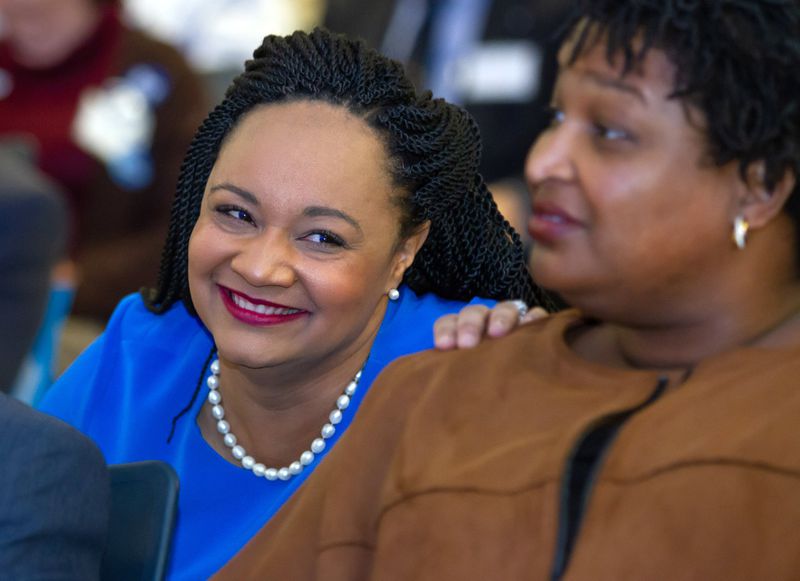 Just days after Rep. John Lewis’ death (D-GA), Georgia Democrats selected party chairwoman Nikema Williams, a state senator who framed herself as a protégé of the civil rights giant, to replace his name on the November ballot, the Atlanta Journal Constitution reports.

Duval County Sheriff Mike Williams told Politico that security plans put forth for the Republican Convention in Jacksonville next month are “not achievable” under current time constraints.

Said Williams: “As we’re talking today, we are still not close to having some kind of plan that we can work with that makes me comfortable that we’re going to keep that event and the community safe.”

He added: “There’s a lot of things that need to happen: an event schedule nailed down, and being able to sign contracts and spend money so that we can prepare for this event. And none of that has happened yet.”

“West moved to Texas several years ago and became politically active here. His victory means an abrupt change in party leadership with less than four months until one of the most challenging elections that Texas Republicans are facing in a long time.”

The only thing that would make Texas Republicans more toxic than they already are is electing Allen West to lead them. LOL.

Kanye West, in his first event since declaring himself a presidential candidate, ranted against Harriet Tubman, saying the Underground Railroad conductor “never actually freed the slaves, she just had them work for other white people,” the AP reports.

His comments drew shouts of opposition from some in the crowd.

“Kanye West did not submit any of the 10,000 petition signatures needed to get on South Carolina’s 2020 presidential ballot by Monday’s noon deadline despite hosting a rally in the state the previous day,” the Charleston Post & Courier reports.

Richard Wolffe: “Of the very few things Donald Trump is supposed to know in any modicum of detail, TV sits right at the tippity-top. There are more historic crises challenging his presidency than there are cable news channels, but that doesn’t stop him tweeting about all the TV he’s watching all day.”

“For a man who still measures his manhood by his own TV ratings, it was a curious choice to sit outside in the humid steamer of a Washington summer, caked in his glowing orange make-up, to field the pesky questions of the best interviewer on Fox News.”

Gerald Seib: “The good news for President Trump is this: There just might be [hidden Trump voters].”

“The bad news for the president: The universe of potential hidden supporters is heavily populated with the kinds of people who happen to be more comfortable with Joe Biden than they were with Hillary Clinton four years ago.”

“The question of whether there is a submerged Trump vote is rising in importance as virtually every poll, nationwide and in swing states, shows Mr. Trump losing to Mr. Biden. Nationally, the Biden lead is so large that the emergence of pockets of secret supporters alone probably wouldn’t be enough to fully turn around the numbers.”

A new Washington Post-ABC News poll finds Joe Biden leading Donald Trump on the issue of “crime and safety” by nine points, 50% to 41%.

Aaron Blake: “The finding echoes what we’ve seen from other pollsters. A Pew Research Center poll from mid-June showed Biden led Trump 46% to 43% on which candidate could ‘effectively handle law enforcement and criminal justice issues.’ A Kaiser Family Foundation poll from late June directly employed the ‘law and order’ phrasing, finding voters trusted Biden to handle maintaining it by a 51-41 margin — virtually identical to the Post-ABC poll.”

“To the extent that there is a law-and-order candidate at this point, it appears to be Biden.”

President Trump refused to say on Fox News whether he would accept the results of November’s election if he loses to Joe Biden, telling host Chris Wallace: “I have to see. I’m not just going to say yes. I’m not going to say no.”

“The fact is, whether he knows it yet or not, he will be leaving.” — Speaker Nancy Pelosi, on MSNBC, regarding President Trump’s suggestion he might not accept the results of the election if he loses.

Biden’s response: “The American people will decide this election. And the United States government is perfectly capable of escorting trespassers out of the White House.”

“President Trump’s failure to contain the coronavirus outbreak and his refusal to promote clear public-health guidelines have left many senior Republicans despairing that he will ever play a constructive role in addressing the crisis, with some concluding they must work around Mr. Trump and ignore or even contradict his pronouncements,” the New York Times reports.

“In recent days, some of the most prominent figures in the G.O.P. outside the White House have broken with Mr. Trump over issues like the value of wearing a mask in public and heeding the advice of health experts like Dr. Anthony S. Fauci, whom the president and other hard-right figures within the administration have subjected to caustic personal criticism….”

“A handful of Republican lawmakers in the Senate have privately pressed the administration to bring back health briefings led by figures like Dr. Fauci and Dr. Deborah Birx, who regularly updated the public during the spring until Mr. Trump upstaged them with his own briefing-room monologues. And in his home state of Kentucky last week, Senator Mitch McConnell, the majority leader, broke with Mr. Trump on nearly every major issue related to the virus.”

“In the four months since Joe Biden effectively won the Democratic presidential nomination, he has focused on consolidating the party’s divergent and often warring factions. As the closing stretch of the campaign nears, that effort will expand to include Republicans disaffected with President Trump,” the AP reports.

“Former Ohio Gov. John Kasich, a Republican and frequent Trump critic, has been approached and is expected to speak at the Democratic National Convention on Biden’s behalf next month… Kasich is among a handful of high-profile Republicans likely to become more active in supporting Biden in the fall.”

“Trump, meanwhile, is doing virtually nothing to expand his appeal beyond his most loyal supporters.”

“Joe Biden is outspending President Trump this month with big TV ad buys in traditional swing states, as Trump focuses on digital ads to shore up his base in what should be Republican strongholds,” Axios reports.

“Biden and affiliated Democrats have outspent Republicans by $4 million in Michigan, $3.5 million in Pennsylvania, $2 million in Arizona and $700,000 in Wisconsin.”

Said Ryan: “Biden is winning over Trump in this category of voters 70 to 30, and if that sticks, he cannot win states like Wisconsin, Michigan and Pennsylvania.”

House Foreign Affairs Chairman Eliot Engel (D-NY), a 16-term veteran who was vanquished in his New York primary by a progressive insurgent, bluntly warned his fellow Democrats against backing challengers against sitting lawmakers from the same party, CNN reports.

Said Engel: “I think that it’s a very dangerous thing for party unity if members are going to start putting up primary challenges to other members in the same caucus. I think it’s not something that should be done.”

He added: “But you know everyone does what they want to do, and I’m willing to abide by the wishes of the people.”

Primary challenges are how we get out of touch and out of time 30 year incumbents out of office when they forget to retire themselves. Engel was no longer representative of his district or his party. He should have retired upon the election of Barack Obama as President. He hung on too long, like most if not all long time incumbents do. So primary challenges will continue. If an incumbent is challenged in a primary, he or she should probably take the hint that they are out of step with those they represent.