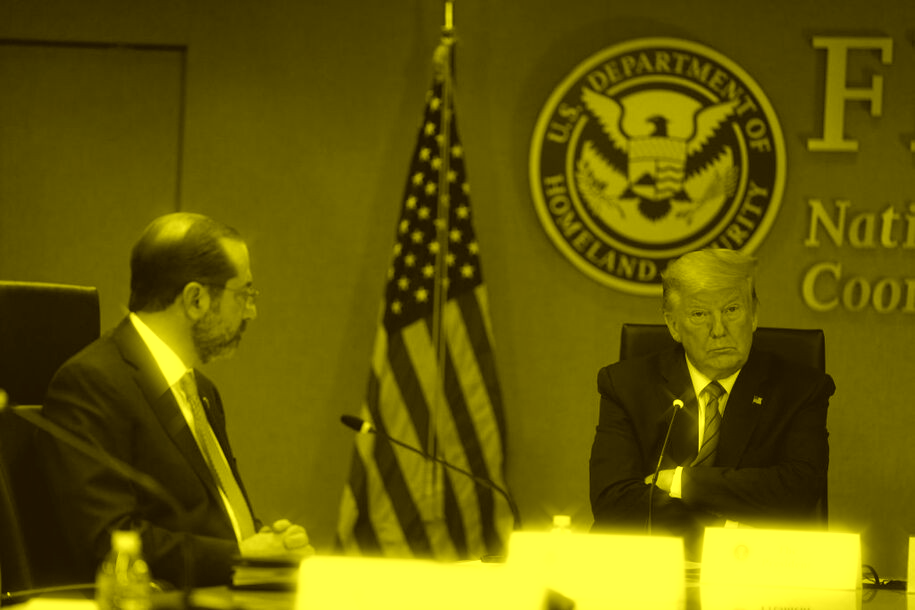 “This week’s remarkable character assault by some top White House advisers on Anthony Fauci, the nation’s leading infectious-disease expert, signified President Trump’s hostility toward medical expertise and has produced a chilling effect among the government scientists and public health professionals laboring to end the pandemic, according to administration officials and health experts,” the Washington Post reports.

“As novel coronavirus cases surge out of control coast to coast, the open rancor between the scientific community and a White House determined above all to resuscitate the economy and secure a second term for Trump threatens to further undermine the U.S. response, which already lags behind those of many other developed nations.”

“Joe Biden, citing intelligence briefings that he is now receiving, warned Friday night that Russia and China were both actively engaged in trying to sow doubt in the American electoral system,” the Washington Post reports.

Said Biden: “We know from before and I guarantee you I know now because now I get briefings again. The Russians are still engaged in trying to delegitimize our electoral process. Fact.”

He added: “China and others are engaged as well in activities that are designed for us to lose confidence in the outcome.”

The U.S. attorney in Oregon wants an investigation into “constitutionally questionable arrests in Portland” by officers from U.S. Customs and Border Protection, according to Oregon Public Broadcasting.

“Oregon Attorney General Ellen Rosenblum announced late Friday that her office would sue several federal law enforcement agencies over their response to Portland protests and launch a criminal investigation into an incident of force by federal officers,” the Oregonian reports.

Los Angeles Times: “A month into his stay-at-home order and under pressure to lift restrictions, Gov. Gavin Newsom drew a line in the sand: In order to safely reopen and suppress the coronavirus, California needed to be able to test everyone with COVID-19 symptoms and trace the contacts of confirmed cases. … But three weeks later, Newsom began reopening businesses before meeting his own benchmarks.”

“The St. Louis couple at the center of a firestorm over their armed confrontation with a crowd of Black Lives Matter protesters will join an official Trump campaign event on Friday night,” the Washington Beacon reports.

“My philosophy is very simple: When you see something that is not right, not fair, not just, you have to stand up and just say something. You have to do something. I got into good trouble, necessary trouble. Even today, I tell people, ‘We need to get in good trouble.’” — Rep. John Lewis, quoted by CNBC.

David Remnick: “Too often in this country, seeming progress is derailed, reversed, or overwhelmed. Bloody Sunday led directly to the passage of the Voting Rights Act––and yet suppressing the Black vote is a pillar of today’s Republican Party strategy. The election of the first African-American President was followed by a bigot running for election, and now reelection, on a platform of racism and resentment. The murder of Jesse Thornton has its echoes in the murders of George Floyd, Breonna Taylor, and many others. Indeed, to this day, the bridge where Lewis nearly lost his life is named in honor of Edmund Pettus, a U.S. senator who was a Confederate officer and a Grand Dragon of the Alabama Ku Klux Klan.”

“And so there were times when Lewis, who died on Friday, at the age of eighty, might have felt the temptation at times to give up, to give way. But it was probably his most salient characteristic that he always refused despair; with open eyes, he acknowledged the darkest chapters of American history yet insisted that change was always possible.”

“The official portraits of former Presidents Bill Clinton and George W. Bush were removed from the Grand Foyer of the White House within the last week and replaced by those of two Republican presidents who served more than a century ago,” CNN reports.

“White House tradition calls for portraits of the most recent American presidents to be given the most prominent placement, in the entrance of the executive mansion, visible to guests during official events.”

The only reason the Obama portrait wasn’t moved is because Trump has refused to host his predecessor in the White House to hang the portrait, not that Obama is too upset by that. We should thank Trump for establishing these two precedents. First, he will never again visit the White House once he thrown out of it on his fat ass, much less for any portrait hanging. Second, his portrait, if it is ever hung in the White House, will be placed in the steam pipe trunk distribution venue. (West Wing TV show joke).

Said Tillis, who is up for reelection this year, was caught on audio: “Just wear the mask out of respect. Now I will tell you I’m not a scientist and I’m not a statistician, but one of the concerns that we’ve had more recently is that the Hispanic population now constitutes about 44% of the positive cases, and we do have some concerns that in the Hispanic population we’ve seen less consistent adherence to social distancing and wearing a mask.”

Vice President Pence cast the 2020 election as a choice between “freedom and opportunity” or “socialism and decline,” delivering a clear signal of the Trump campaign’s message as it gears up for the final months before Election Day, The Hill reports.

He also called Biden “a Trojan horse for a radical agenda.” LOL. The Trump campaign spent the last few years talking up a Sleepy Joe Biden that has been an establishment swamp creature for 45 years. But now he is also some radical dystopian threat to the very fabric of our nation. Good luck with that.

Bergen Record: “In some ways, it’s a remarkable ascent for [new Trump campaign manager Bill] Stepien… who initially seemed to have been a top inner-circle suspect in the plot to paralyze the streets of Fort Lee with traffic jams by closing two access lanes to the bridge…”

“He emerged from the Bridgegate scandal relatively unscathed… In documents and testimony, Stepien came across as a detail-oriented, hardworking operative who delighted in the cut and thrust of Jersey politics in the Christie era, doling out gifts to supporters and meting out punishment to those put in the ‘penalty box.’”

“Trump’s anger at Parscale has been building since last year after he learned his campaign manager was living a lavish lifestyle built off riches he’d made working for the president.”

New York Times: “Ohio offers Democrats the possibility of seizing on suburban gains they have made in the Trump era, while restoring parts of the old Obama coalition…. In a state where decades of deindustrialization have created long-term anxiety about jobs, the reality behind Mr. Trump’s unmet promises to restore steel, coal and other industrial sectors through trade wars is also being put to the test — a dynamic that could extend to other states across the Midwest.”

“For all the optimism of Democrats, though, the Buckeye State just might be an illusion in the mists. … Mr. Biden hasn’t named an Ohio state director, frustrating local Democratic officials. The Ohio Democratic Party is so financially stretched it sought over $333,000 from the federal coronavirus relief package to help meet its payroll.”

Inside Elections has a new Electoral College forecast with Joe Biden beating Donald Trump 319 to 188 and just 33 electoral votes still a Toss Up.

“While the precise cause can be argued, Trump’s job rating has been on a precipitous decline over the last two months, not only putting a second term increasingly out of reach but potentially wreaking havoc on GOP candidates down the ballot…”

First Read: “As President Trump’s numbers have declined in recent weeks, our NBC News/Wall Street Journal poll shows that some of that erosion has come from inside his own party — among the non-Trump wing of the GOP. In short, Trump doesn’t have a base problem. Rather, he has a Republican problem.”

“It might be easy to dismiss these non-Trump Republicans as a minority of the party. But you need them if you want to win re-election.”