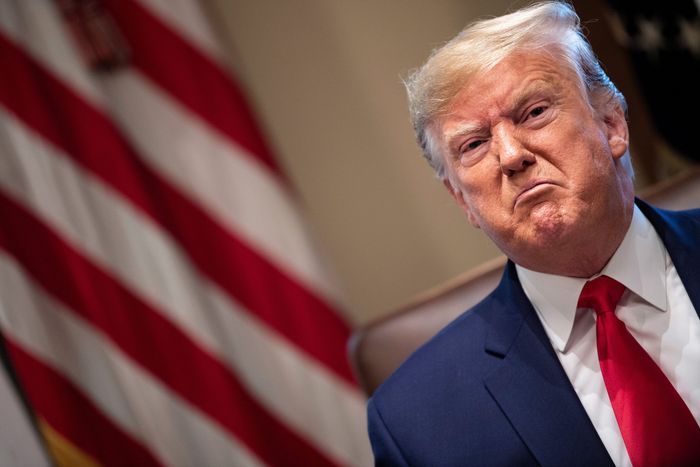 So Kayleigh McEnany had a day. First, the White House press secretary told reporters that President Trump wants schools to open “and when he says open, he means open and full, kids being able to attend each and every day.” Said McEnany: “The science should not stand in the way of this,” before quickly adding, “the science is on our side here.” No it’s not. You just want kids and their teachers to die at the altar of your cult leader.

Second, after White House press Secretary Kayleigh McEnany called Chicago Mayor Lori Lightfoot “the derelict mayor of Chicago” and suggested she should request federal help in combatting the coronavirus and gun violence, Lightfoot shot back on Twitter with the meme of a white woman who harasses a person of color: “Hey Karen. Watch your mouth.”

“Previously public data has already disappeared from the Centers for Disease Control and Prevention’s website after the Trump administration quietly shifted control of the information to the Department of Health and Human Services,” CNBC reports.

“It is officially official. Governor Kemp does not give a damn about us. Every man and woman for himself or herself. Ignore the science and survive the best you can.” — Savannah Mayor Van Johnson (D), on Twitter, responding to Georgia Gov. Brian Kemp’s (R) order overriding local mandates requiring face masks.

Third, not content with that, Gov. Kemp’s (R) administration “went to court Thursday seeking to block Atlanta from enacting coronavirus restrictions and requiring residents to wear masks, setting up a legal showdown between the state and local governments over efforts to contain the disease,” the Atlanta Journal Constitution reports.

Fourth, according to Bloomberg, “Officials across Texas are rushing to mobilize overflow mortuary space as communities brace for a surge in coronavirus deaths following Fourth of July festivities. Already, July has had a succession of record-setting days in terms of new cases, deaths and the number of people hospitalized with Covid-19 as the pandemic takes hold in the state…”

“U.S. Army medics are being deployed to two counties along the Texas-Mexico border to assist hospitals overrun with new virus cases. And hospitals and local governments are requesting refrigerated trucks and trailers outfitted with racks designed for storing the dead.”

“The document recommends that states — including California, Florida, Georgia, Oklahoma and Texas — toughen rules in hot spots and increase ‘community-led testing.’ The task force also advises that several counties should shut down bars, nightclubs and gyms.”

The Verge: “The Twitter accounts of major companies and individuals have been compromised in one of the most widespread and confounding hacks the platform has ever seen, all in service of promoting a bitcoin scam that appears to be earning its creator quite a bit of money.”

“The company also took the unprecedented measure of preventing verified accounts from tweeting at all starting sometime around 6PM ET. This would seem to be the first time Twitter has ever done this in the company’s history.”

Mary Trump told the Washington Post that President Trump is “clearly racist” and that racial slurs were common around her father’s family as she growing up.

She said that she got used to “a knee-jerk anti-Semitism, a knee-jerk racism,” and added: “Growing up, it was sort of normal to hear them use the n-word or use anti-Semitic expressions.”

Mary Trump told the Washington Post that watching the country’s leadership devolve into “a macro version of my incredibly dysfunctional family” was one of the factors that compelled her to write her book, Too Much and Never Enough: How My Family Created the World’s Most Dangerous Man.

Mary Trump said she blames “almost 100 percent” her grandfather, Fred Trump — the family patriarch whom she describes as a “sociopath” in her 214-page memoir of sorts — for creating the conditions that led to Trump’s rise and, ultimately, what she views as his dangerous presidency.

“So many nationwide actions could have been taken in those early days but weren’t. While other countries were racing ahead with well-coordinated testing regimes, the Trump administration bungled the effort. The test used by the federal Centers for Disease Control and Prevention early on was fraught with inaccuracies, and onerous regulations hindered the nation’s private labs. The resulting disorganization would delay mass testing for almost two months and leave the nation largely in the dark as the epidemic spread.”

“Meanwhile, instead of listening to his own public health experts, the president was talking and tweeting like a man more concerned about boosting the stock market or his reelection plans.”

“Former game show host Chuck Woolery announced his son has tested positive for COVID-19, just days after Woolery accused medical professionals and Democrats of lying about the virus in an effort to hurt the economy and President Trump’s reelection chances,” The Hill reports.

“The leaders of the armed forces are pressuring their boss, Defense Secretary Mark Esper, to ban the public display of the Confederate flag at Defense Department facilities, amid opposition from the White House,” Politico reports.

The U.K. accused Russian state intelligence of hacking international pharmaceutical and academic research in a bid to win the race to secure a vaccine against Covid-19, Bloomberg reports.

The Wall Street Journal editorial board: “A more significant reason voters are souring on Mr. Trump’s virus management is his unwillingness to be candid or consistent about the disease’s likely toll…”

“Mr. Trump’s messaging has caromed from saying the virus isn’t a problem, to the economy must shut down to crush it, to the economy must open and everything will soon go back to normal, to barely talking about it at all as cases rise. Now his aides are filling the vacuum by attacking the government health expert who sees it as his role to warn of worst-case scenarios.”

“This is a mess, and if it continues Republicans will be routed in November…”

Politico: “In the middle of a devastating pandemic and searing economic crisis, the White House has an urgent question for its colleagues across the administration: Are you loyal enough to President Trump?”

“The White House’s presidential personnel office is conducting one-on-one interviews with health officials and hundreds of other political appointees across federal agencies, an exercise some of the subjects have called ‘loyalty tests’ to root out threats of leaks and other potentially subversive acts just months before the election, according to interviews with 15 current and former senior administration officials.”

“The Trump administration is considering a sweeping ban on travel to the United States by members of the Chinese Communist Party and their families, a move that would almost certainly prompt retaliation against Americans seeking to enter or remain in China and exacerbate tensions between the two nations,” the New York Times reports.

“The presidential proclamation, still in draft form, could also authorize the United States government to revoke the visas of party members and their families who are already in the country, leading to their expulsion.”

Alexis Madrigal: “The deaths are not happening in unpredictable places. Rather, people are dying at higher rates where there are lots of COVID-19 cases and hospitalizations: in Florida, Arizona, Texas, and California, as well as a host of smaller southern states that all rushed to open up.”

“The deaths are also not happening in an unpredictable amount of time after the new outbreaks emerged. Simply look at the curves yourself. Cases began to rise on June 16; a week later, hospitalizations began to rise. Two weeks after that—21 days after cases rose—states began to report more deaths. That’s the exact number of days that the Centers for Disease Control and Prevention has estimated from the onset of symptoms to the reporting of a death.”

“Many people who don’t want COVID-19 to be the terrible crisis that it is have clung to the idea that more cases won’t mean more deaths. Some Americans have been perplexed by a downward trend of national deaths, even as cases exploded in the Sun Belt region. But given the policy choices that state and federal officials have made, the virus has done exactly what public-health experts expected.”

“The provisions amount to a sharp increase above what they put away in the first three months of the year, reflecting a shift in their assumptions about the length and severity of the pandemic’s economic toll. JPMorgan, the largest U.S. bank by assets, said it put aside extra to prepare for an unemployment rate that remains at double digits well into next year and a slower recovery in gross domestic product than the bank’s economists assumed three months ago.”