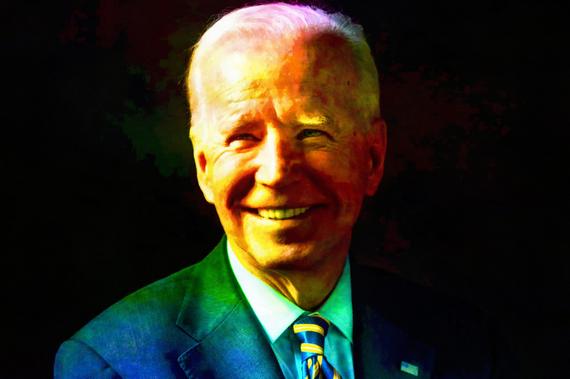 CNN: “The minute-long coronavirus-focused spot, titled ‘Tough,’ is part of a new mid-six figure broadcast and digital advertisement buy, a Biden campaign official said, with state customized ads slated to run in Arizona, Florida, North Carolina, as well as Texas — all states that have seen recent rises in coronavirus cases.”

Larry Sabato’s Crystal Ball: “With Joe Biden’s national lead around eight to 10 points, there is a possibility that he could compete for some usually Republican states. We are moving seven states from Safe Republican to Likely Republican.”

“Our current ratings represent something of a hedge between a Trump comeback and Biden maintaining or expanding his large national lead.”

Joe Biden unveiled his energy and climate plans with a call for spending $2 trillion over four years on climate-friendly infrastructure — a proposal the campaign is casting as part of a wider economic recovery package.

Los Angeles Times: “The plan is notably more aggressive than the one Biden campaigned on during his party’s primaries, part of an overall move in which he has embraced some of the proposals of his more progressive rivals in an effort to unify the party for the general election.”

“He’s going to have a cold direct line into my office. … We had the Jeff Sessions thing, we gave it a shot, I had no idea it could be as bad as it was. But he had no clue. He just let it get away from him. It’s really a shame.”

A new Axios-Ipsos Coronavirus Index poll finds 71% of parents said that sending their kids back to school is either a large or moderate risk to their own health.

“President Trump swept to power by championing the hardships of forgotten men and women, but his re-election bid has so far centered on the plight of just one person: himself,” Bloomberg reports.

“Trump is struggling to respond to a resurgent pandemic, an economic downturn and nationwide protests for racial justice. The coronavirus has weakened the central plank of his campaign — the economy — while mostly scuttling the rallies that he thrives on…”

“All the current crises could make any president seeking re-election feel unlucky. But most of his predecessors, when faced with hardship, kept those feelings to themselves and focused their public statements on the misfortunes of the electorate. Not Trump.”

Joe Biden  signaled he would be open to the Senate ending its practice of imposing a 60-vote threshold for most legislation, a positional shift from the Democratic presidential nominee who spent more than 35 years as a senator, the New York Times reports.

Said Biden: “It’s going to depend on how obstreperous they become… But I think you’re going to just have to take a look at it.”

“Everybody just assumes no one is going.” — Rep. Darin LaHood (R-IL), quoted by the New York Times, on the Republican National Convention.

Former New Jersey Gov. Chris Christie (R) tells The Hill he may run for president in 2024.

Said Christie: “I feel like there are a lot of atmospheric things that happened in the lead up to the 2016 race, especially the Bridgegate matter which now has been dismissed by the United States Supreme Court in a 9-0 vote that there was no crime committed there. And yet the media and others convicted people before they even had a trial, and it materially affected my ability to run for president.”

He added: “Now that we’ve had that cleared away and it’s no longer a controversy, you know, from my perspective, maybe 2024 is time to try to go after that job again.”

New York Times: “With coronavirus cases surging in Florida, Republicans are planning to move the three nights of their national convention taking place in the state from an indoor arena to an outdoor venue in Jacksonville… It’s still unclear how many people will be allowed to attend the events.”

“The plan to move the activities outdoors was made after a meeting that Mr. Trump held with political advisers on Monday evening.”

Jon Ward: “Since the emergence of the coronavirus, Trump has made numerous wild claims — without any evidence and in contradiction to known facts — that mail-in voting will lead to widespread fraud and cheating. If most Republicans vote in person and most Democrats vote by mail, that could create a scenario well suited to Trump’s tendency to make unfounded accusations of wrongdoing.”

Said law professor Rick Hasen: “As Trump drives more and more of his supporters to vote in person and away from vote-by-mail, it’s quite likely that we’ll see Trump getting many more votes on election night, the votes that are counted on Election Day.”

He added: “Then, four or five days later, if Biden becomes the winner as the absentee ballots are counted in Philadelphia or Detroit, that’s a recipe, if it’s close, for a really ugly election scenario.”