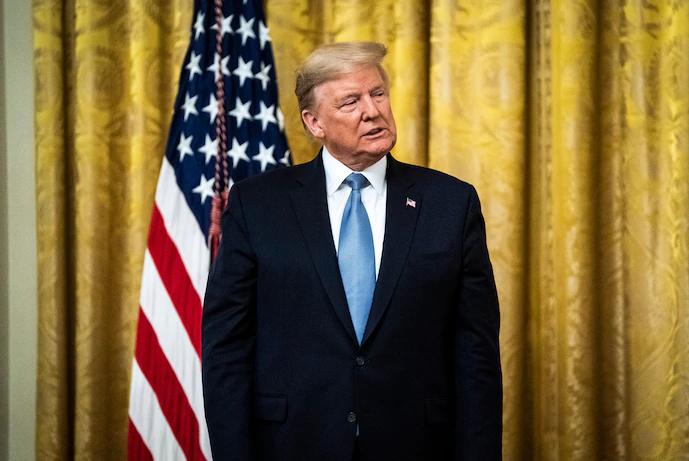 The Washington Post editorial page: “There are no doubt thousands of people in federal prison who deserved a presidential commutation more than Roger Stone. But after President Trump’s intervention on Friday, Mr. Stone will serve none of his prison sentence. The president may have had the power to help his longtime friend. But that does not make it any less a perversion of justice — indeed, it is one of the most nauseating instances of corrupt government favoritism the United States has ever seen.”

“President Trump’s intervention into a criminal case connected to his own conduct drew fierce rebukes Saturday from Democrats and a few lonely Republicans, with calls for investigations and legislation,” the AP reports.

“But it remained to be seen if Trump’s most recent defiance of the conventions of his office to commute the sentence of political confidant Roger Stone, just four months before Election Day, would matter to voters grappling with a deadly COVID-19 surge and a national discourse on racial justice.”

Jeffrey Toobin called President Trump’s granting of clemency to Roger Stone ― who was soon set to begin a 40-month sentence for lying to Congress, witness tampering and obstructing the House investigation into Russian interference in the 2016 election ―  as “the most corrupt and cronyistic act in perhaps all of recent history.”

Max Boot: “Three months ago — all the way back on April 5 — I proclaimed Donald Trump the worst president ever. Oh, how innocent I was. Sure, I knew he was bad. But not this bad.”

“Back then I thought he was barely edging James Buchanan in the annals of presidential ineptitude. But now, with the commutation of Roger Stone’s well-deserved prison sentence and so many other vile acts, he has disgraced the nation’s highest office as no previous occupant has come close to doing.”

“Think about all that has happened since April 5…”

“President Trump has said he learned lessons from President Richard M. Nixon’s fall from grace, but in using the power of his office to keep his friend and adviser Roger J. Stone Jr. out of prison he has now crossed a line that even Mr. Nixon in the depths of Watergate dared not cross,” the New York Times reports.

“For months, some of Mr. Trump’s senior White House advisers warned him that it would be politically self-destructive if not ethically inappropriate to use his clemency power to help Mr. Stone, who was convicted of lying to protect the president. But in casting aside their counsel on Friday, Mr. Trump indulged his own sense of grievance over precedent and restraint to reward an ally for his silence.”

Jeffrey Toobin: The Roger Stone case shows why Trump is worse than Nixon.

“By any standard, no matter how you look at it, the U.S. is losing its war against the coronavirus,” Axios reports.

“The pandemic is not an abstraction, and it is not something that’s simmering in the background. It is an ongoing emergency ravaging nearly the entire country, with a loss of life equivalent to a Sept. 11 every three days — for four months and counting.”

President Trump told Noticias Telemundo that areas in the United States where coronavirus cases have surged are “going to be fine.”

Said Trump: “It flared up in areas where they thought it was ending, and that would be Florida, Texas, a couple of other. They’re going to have it under control very quickly.”

“Coronavirus patients are pouring into hospitals across the American South and West, straining front-line doctors and nurses and draining supplies of protective gear and testing equipment, according to health-care workers around the country,” the Washington Post reports.

“In pandemic hotspot states such as Florida, Arizona, California and Texas, hospitals are adding new intensive care unit beds and special air-flow systems to treat the growing demand as virus hospitalizations set records almost daily. To cope with the wave of patients, hospitals are canceling elective surgeries to free up space for those sick with the virus. Medical staff warn they could become overwhelmed.”

“New cases of COVID-19 rose by over 69,000 across the United States on Friday, according to a Reuters tally, setting a record for the third consecutive day as Walt Disney stuck to its plans to reopen its flagship theme park in hard-hit Florida,” Reuters reports.

Gov. Andy Beshear (D) said that amid “an explosion of COVID,” all Kentuckians must wear masks in public starting Friday at 5 p.m., the Louisville Courier Journal reports.

Alabama state Sen. Del Marsh (R) said he is not concerned about the state reaching more than 2,000 cases of coronavirus in one day, WSFA reports. Marsh says he wants to see more people with COVID-19 because “we start reaching an immunity as more people have it and get through it.”

With Texas continuing to break records for new coronavirus deaths and hospitalizations this week, Gov. Greg Abbott (R) reiterated Friday that things will continue to get worse, the Texas Tribune reports.

And if people keep flouting his new statewide mask mandate, he said, the next step could be another economic lockdown.

“Packed elevators and crowded committee rooms. Legislators sitting shoulder-to-shoulder on the House and Senate floor. People standing close to each other and talking, sometimes leaning in to whisper, without a mask in sight,” the AP reports.

“Those were common scenes at the Mississippi Capitol in June — a month that saw a historic vote to remove the Confederate emblem from the state flag — and now at least 26 lawmakers have been diagnosed with the coronavirus in the biggest known outbreak in any state legislature in the nation.”

“That works out to about 1 in 7 Mississippi legislators.”

Kristin Urquiza wrote in a scathing obituary in the Arizona Republic that her father, Mark Urquiza, should still be alive:

“His death is due to the carelessness of the politicians who continue to jeopardize the health of brown bodies through a clear lack of leadership, refusal to acknowledge the severity of this crisis, and inability and unwillingness to give clear and decisive direction on how to minimize risk.”

“Federal materials for reopening schools, shared the week President Trump demanded weaker guidelines to do so, said fully reopening schools and universities remained the ‘highest risk’ for the spread of the coronavirus,” the New York Times reports.

Lawfare: “President Trump’s commutation of the prison sentence of his long-time confidante Roger Stone is wholly unsurprising. Indeed, given Trump’s repeated teasing of the matter over the life of the case against Stone, it would have been something of surprise had he not intervened so that his felonious friend was spared time behind bars.”

“But the predictable nature of Trump’s action should not obscure its rank corruption. In fact, the predictability makes the commutation all the more corrupt, the capstone of an all-but-open attempt on the president’s part to obstruct justice in a self-protective fashion over a protracted period of time. That may sound like hyperbole, but it’s actually not. Trump publicly encouraged Stone not to cooperate with Robert Mueller’s investigation; he publicly dangled clemency as a reward for silence; and he has now delivered. The act is predictable precisely because the corrupt action is so naked.”

“A New York judge has extended a temporary restraining order against Mary Trump until Monday, a day before the release of her tell-all book about her uncle, President Trump, and his family,” The Hill reports.

“The development does not put off the publication of the book, which publisher Simon & Schuster has set for Tuesday, but it will prevent Mary Trump from promoting the work at least through Monday.”

Sam Baker: “Supreme Court Chief Justice John Roberts is not the revolutionary that conservative activists want him to be. He moves slower than they want, sides with liberals more than they want, and trims his sails in ways they find maddening. But he is still deeply and unmistakably conservative, pulling the law to the right — at his own pace and in his own image.”

“Roberts is not turning into a liberal. The law either stays put or moves to the right almost every time he is in the majority, even when it’s a majority with the more liberal justices.”

“But he has a lifetime appointment, a strong sense that it’s his duty to preserve public trust in the court, and his own ideas about how to do that. Roberts’ position as the court’s only real potential swing vote gives him the power to dictate not just bottom-line outcomes, but also how the court gets there.”

Playbook: “The buzz in the White House is that, at some point over the next week or so, there is a plan in place to resubmit paperwork to do away with DACA. Remember: The Supreme Court said the administration repealed it incorrectly last time, and gave the White House a road map for a do-over.”

“Of course, this will elicit head slaps from many corners of the Republican Party, but it follows in line with the Trump administration’s consistent political belief that they are somehow at risk of losing their base.”

“Federal officials were so worried Jeffrey Epstein’s longtime confidant Ghislaine Maxwell might take her own life after her arrest that they took away her clothes and sheets and made her wear paper attire while in custody.” the AP reports.

“President Trump’s annual financial disclosure report was due to be released more than a week ago. But the filing, the only official public document detailing his personal finances, was not published, and neither the White House nor federal ethics officials offered a public explanation,” the New York Times reports.

“The White House addressed the issue on Wednesday night. An official said Mr. Trump had requested a deadline extension because the report was ‘complicated’ and the president had ‘been focused on addressing the coronavirus crisis and other matters.’”