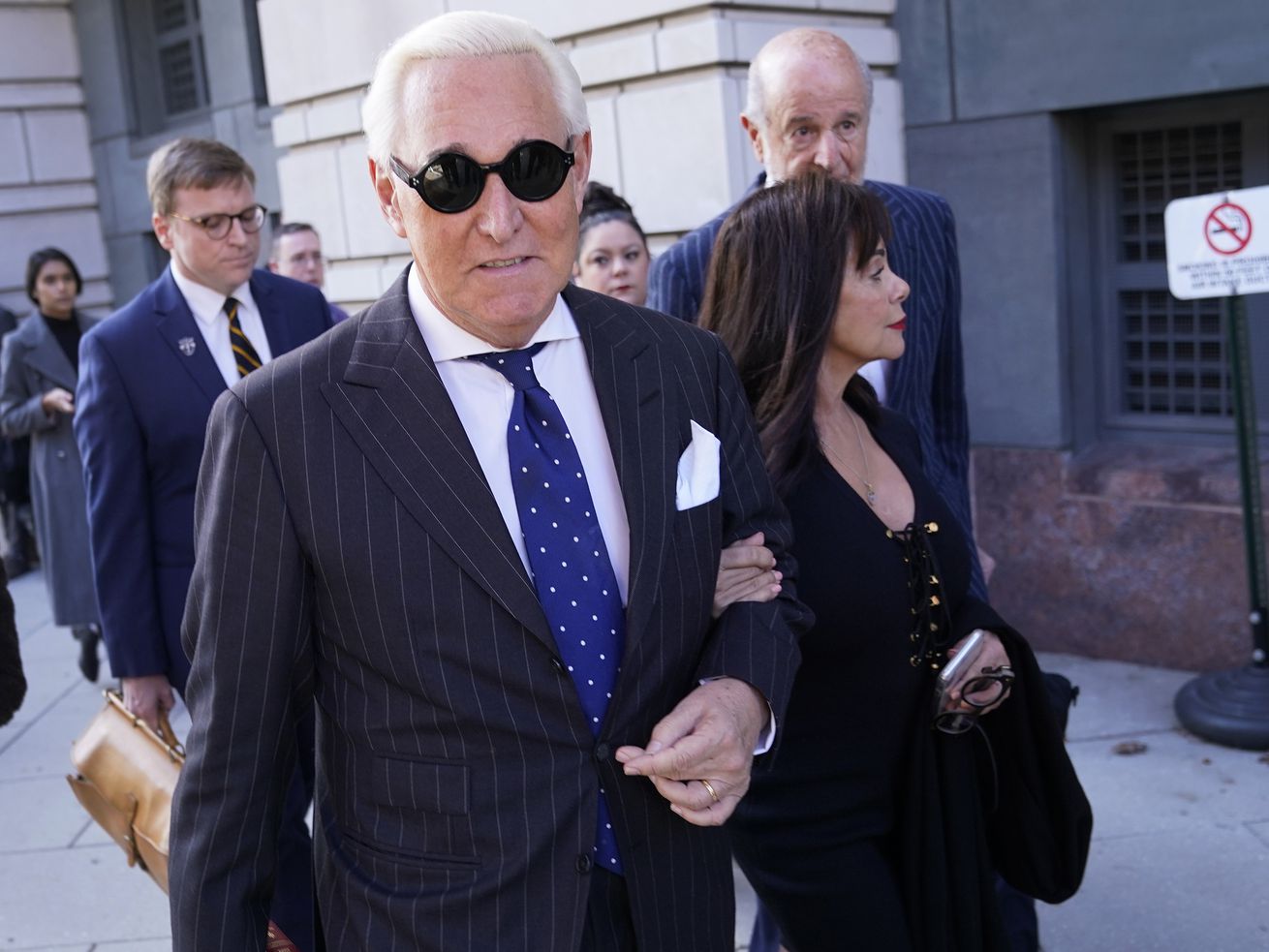 President Trump has commuted the sentence of longtime adviser Roger Stone, who was found guilty of seeking to thwart congressional and FBI investigations into alleged ties between the Trump campaign and Russia, Politico reports.

The controversial move brings an abrupt end to the possibility of Stone spending 40 months behind bars. He had been scheduled to report to prison on July 14.

New York Times: “Granting clemency to Mr. Stone is certain to prompt new complaints that the Trump administration is thwarting the federal justice system to help the president’s friends.”

Politico: “White House and campaign aides who don’t like Stone and think Trump has nothing to gain by helping him” were opposed to the commutation.

“He knows I was under enormous pressure to turn on him. It would have eased my situation considerably. But I didn’t.”

— Roger Stone, in an interview with Howard Feinman earlier today, on whether President Trump would grant him a pardon.

A federal judge in New York — acting quickly on his own and without being asked by either side — has ordered attorneys for President Trump and Manhattan D.A. Cy Vance to inform the court by next Wednesday morning how they expect to proceed with the subpoena for President Trump’s tax documents, NBC News reports.

The judge had previously said the tax documents should be handed over to the grand jury, a ruling that prompted the Supreme Court fight.

President Trump told Fox News he took a cognitive test “very recently” at Walter Reed Medical Center, because the “radical left was saying, ‘Is he all there, is he all there,’ and I proved I was all there because I aced it, I aced the test.” He added that the doctors were “very surprised. They said, ‘That’s an unbelievable thing, rarely does anybody do what you just did.’” Were they surprised because no one expected him to pass? That’s not something to gloat about.

The White House would not say when he took it or why, the New York Times  reports. “Aides to Mr. Trump did not respond to questions about what test he took, when he took it, and whether they would make the results public.”

Jonathan Bernstein: “There are only two numbers from this week you need to know if you want to understand the presidential election: 1.3 million and 59,886.”

“That’s the number of new applications for unemployment insurance last week and (by one estimate) the number of new coronavirus cases from Thursday. They’re both disastrous figures for the nation — and for President Trump, who has no apparent plan to deal with either.”

“Callers on President Trump in recent weeks have come to expect what several allies and advisers describe as a ‘woe-is-me’ preamble,” the Washington Post reports.

“The president rants about the deadly coronavirus destroying ‘the greatest economy,’ one he claims to have personally built. He laments the unfair ‘fake news’ media, which he vents never gives him any credit. And he bemoans the ‘sick, twisted’ police officers in Minneapolis, whose killing of an unarmed black man in their custody provoked the nationwide racial justice protests that have confounded the president.”

“Gone, say these advisers and confidants, many speaking on the condition of anonymity to detail private conversations, are the usual pleasantries and greetings.”

“Instead, Trump often launches into a monologue placing himself at the center of the nation’s turmoil. The president has cast himself in the starring role of the blameless victim — of a deadly pandemic, of a stalled economy, of deep-seated racial unrest, all of which happened to him rather than the country.”

Robert Kaplan, president of the Federal Reserve Bank of Dallas, told Fox Business that widespread mask-wearing is the best way to help the economy recover from the downturn caused by the coronavirus pandemic.

Said Kaplan: “If we all wore a mask, it would substantially mute the transmission of this disease and we would grow faster. We would have a lower unemployment rate. We’d grow faster. And would be far less likely to slow some of our reopenings. But we’ve been uneven so far on our mask-wearing.”

Chris Cox, President Trump’s top liaison to the House of Representatives, has told associates he is leaving the White House, 15 hours after questions were raised about his alleged contacts with a former lobbying client while in government, Politico reports.

“White House trade adviser Peter Navarro is leading a Trump administration effort to demand the Food and Drug Administration reverse course and grant a second emergency authorization for the antimalarial drug hydroxychloroquine to treat covid-19, the disease caused by the coronavirus,” the Washington Post reports.

“Navarro, armed with a controversial new study that he says shows the drug’s effectiveness, is being cheered on by President Trump, who has long touted the drug as a ‘game changer’ and even used himself as a possible preventive measure.”

“President Trump said he’s instructed the Treasury Department to review the tax-exempt status of U.S. schools, colleges and universities, in a pair of tweets that advanced his administration’s weeklong drive to turn education into a political wedge issue,” Politico reports.

Caitlin Owens: “By letting the coronavirus surge through the population with only minimal social distancing measures in place, the U.S. has accidentally become the world’s largest experiment in herd immunity.”

“Letting the virus spread while minimizing human loss is doable, in theory. But it requires very strict protections for vulnerable people, almost none of which the U.S. has established.”

“Cases are skyrocketing, with hospitalizations and deaths following suit in hotspots. Not a single state has ordered another lockdown, even though per capita cases in Florida and Arizona have reached levels similar to New York and New Jersey’s in April.”

“The rising tide of coronavirus cases in the U.S. South and West, coming four months into the outbreak, emerged amid a patchwork of often confusing or conflicting rules across government that have proved inconsistent and often difficult to enforce, making the pandemic harder to halt,” the Wall Street Journal reports.

“With the federal government handing off many decisions over reopening, the states have been the primary drivers behind moves with the most impact on the coronavirus’s spread. States, in turn, have often given responsibility for many of those decisions to counties, cities and businesses.”

“The result is a dizzying mix of rules and guidelines that can differ widely from one region to the next. It is a reflection of the American system of governance that limits federal power and distributes power across states and localities, but to health officials it is an ineffective way to manage a pandemic.”

“Treasury Secretary Steven Mnuchin said Thursday the Trump administration is working with the Senate to pass a new bill for coronavirus-related economic aid by the end of July, as enhanced unemployment benefits near expiration,” the Wall Street Journal reports.

“Mr. Mnuchin said the administration supports a second round of economic impact payments to households, an extension of enhanced unemployment benefits for furloughed workers and a ‘much, much more targeted’ version of the Paycheck Protection Program of forgivable loans for small businesses.”

Dr. Anthony Fauci last saw President Trump in person at the White House on June 2 — and told the Financial Times he has not briefed the president for at least two months.

“He tells me this in a matter-of-fact tone, but I suspect that his indifference is feigned. While Trump holds potential superspreader events, Fauci meets with the task force run by the vice-president.”

He added: “I don’t think it’s an exaggeration to say we have a serious ongoing problem, right now, as we speak. What worries me is the slope of the curve. It still looks like it’s exponential.”

The top writer for Fox News host Tucker Carlson has for years been using a pseudonym to post bigoted remarks on an online forum that is a hotbed for racist, sexist, and other offensive content, CNN reports.